I almost didn’t make it to Cotabato City.

It was not because something untoward happened while I made the trip by land from General Santos City nor did I chicken out last minute.

It was because no one was willing to go with me on this trip. It was kind of like my trip to a couple of dodgy countries some years back. Only difference is that the danger associated with Cotabato seemed more compelling. Traveling by land meant that I would pass by towns such as Mamasapano or Ampatuan where people were massacred as recently as 6 months ago. I could have traveled by air directly to Cotabato which seemed to be a safer option but that was not a luxury I had at the time.

After obtaining assurances from the helpful DOT-ARMM folks, I pushed through with the trip to explore the tourist attractions of Cotabato City and Maguindanao. It’s been something like 3 years since I first got the urge to venture to Maguindanao and I didn’t want to waste this window to go. A picture of the Grand Mosque somewhere online pretty much sealed the deal.

I left General Santos City at around six in the morning ready for a long drive. Less than 2 hours later, I spotted the arch that separated Maguindanao from Sultan Kudarat province. I was officially in the Autonomous Region of Muslim Mindanao, my first time in this deeply misunderstood portion of the Philippines.

The arch was not the only sign that indicated I was in a different province and different region altogether. Entering Maguindanao, I observed how the skyline of every town were punctuated by minarets instead of church towers. As this area was not conquered by the Spaniards until the late-19th century, there were few Hispanic influences to be found. There were no town squares, no Spanish-sounding street names and no colonial-era buildings.

Some folks warned me about a so-called “no man’s land” along the highway that extended from Datu Unsay town up to the lower reaches of Datu Odin Sinsuat town. After reading about some highway shootings in the news, I was inclined to believe them. I persisted, acting nonchalantly as if thinking that would fend off possible criminals. 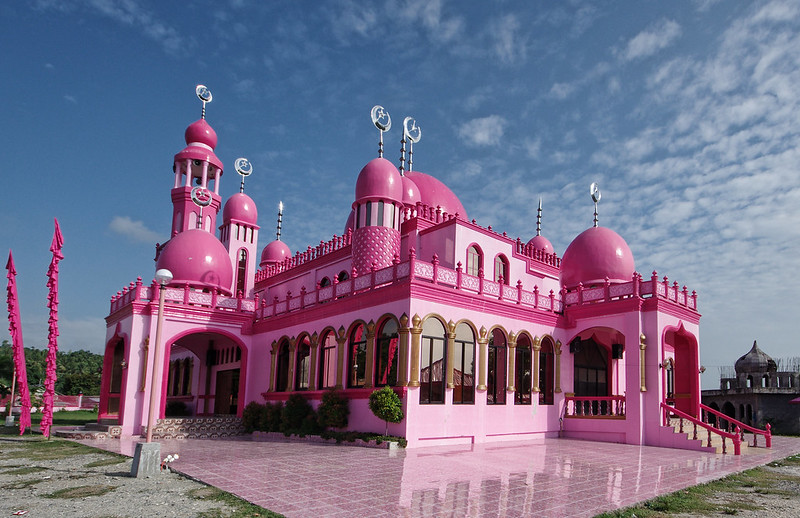 the pinkness of masjid dimaukom

My first stop that day was at Datu Saudi Ampatuan which is fast becoming a pink town. Many of the public buildings in the town are painted pink. This includes the town hall, market, cafeteria and even some warehouses off the highway. Many of them seemed abandoned. What is more glaring however, is perhaps the Masjid Dimaukom or popularly known as the Pink Mosque. Standing just off the highway within this “no man’s land,” the candy pink shade seemed to reassure me that everything was going to be fine. 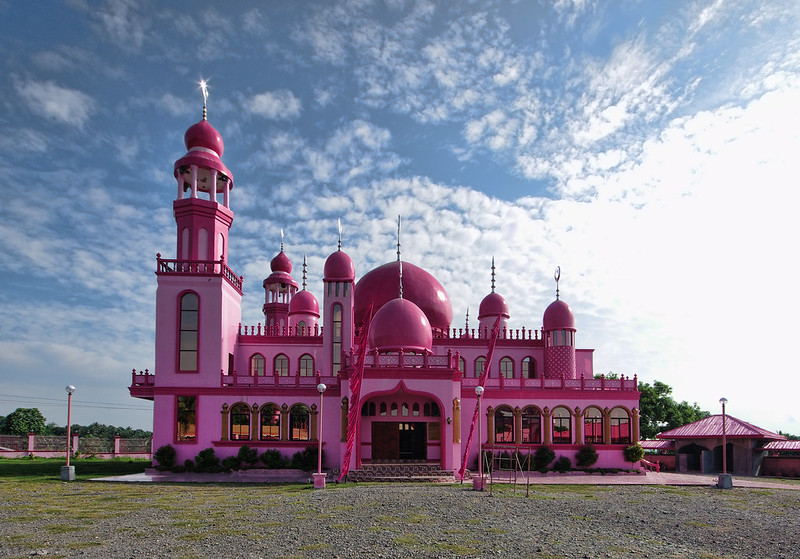 It was only around 8 in the morning when I arrived and the mosque was almost deserted, save for an elderly lady standing outside. After asking for permission, I went in to see the pink-ness of the mosque up close. I wondered how a small town such as Datu Saudi Ampatuan could afford such a grand structure. Apparently, the mosque was built by the town mayor using his own money. The color pink is meant to symbolize peace. Given the notorious location, it seemed to be an ideal that’s many steps away. 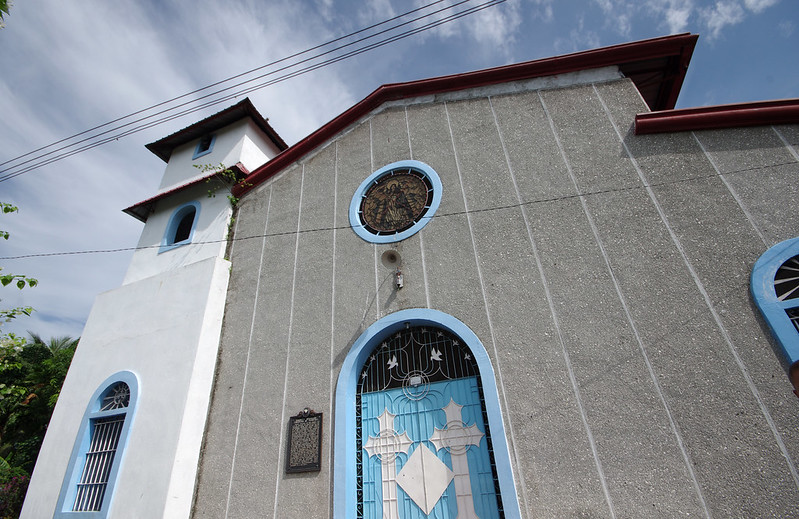 facade of tamontaka church – the oldest in cotabato

From there on, I drove immediately to Cotabato City. At its outskirts, I visited two landmarks. First was the Tamontaka Church. The facade of it looks terribly humble but I glanced upon a historical marker which indicated that it is the first church built in the city. I chanced upon it just when a group of church-goers were leaving from the first and only mass on the Sunday that I was there. The friendly folks were quite curious as to my business in Cotabato and gladly let me in to have  look. 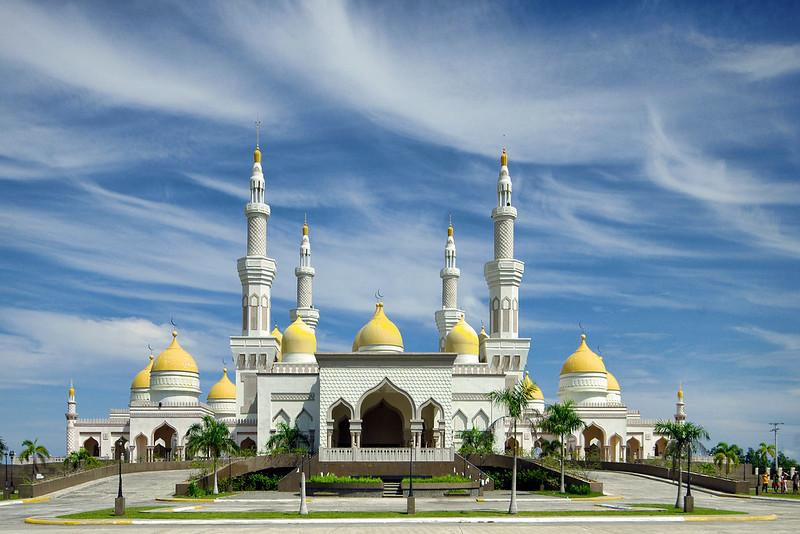 no wonder they call it the grand mosque

The second landmark was perhaps the main reason I did this trip. The Sultan Haji Hassanal Bolkiah Masjid or more popularly known as the Grand Mosque of Cotabato lies at the far end of a side road off the main highway. Even before arriving, I could spot the structure’s multiple yellow domes – a picturesque sight even from afar. 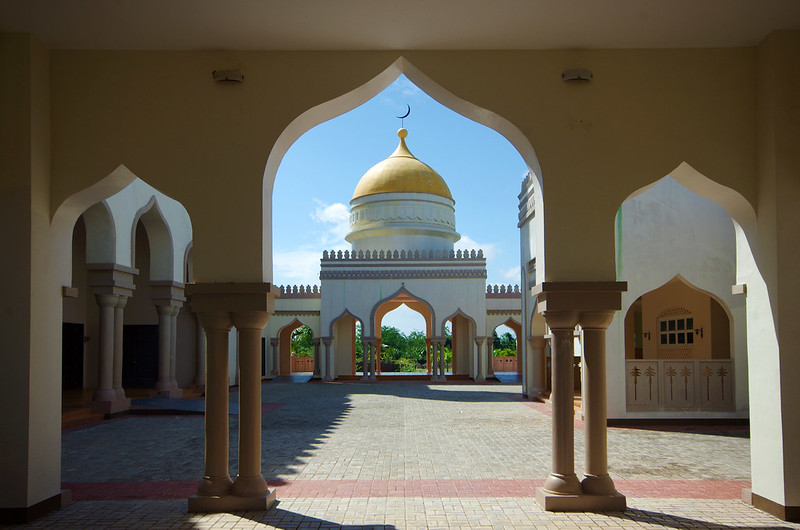 The mosque is named after its financier, the current Sultan of Brunei. It reportedly cost $48 million dollars to build. It is also the largest mosque in the Philippines. One of the most outstanding buildings I’ve seen in the country, it’s hard not to take a good shot of it from any angle. That alone made the trip seemed worth it. 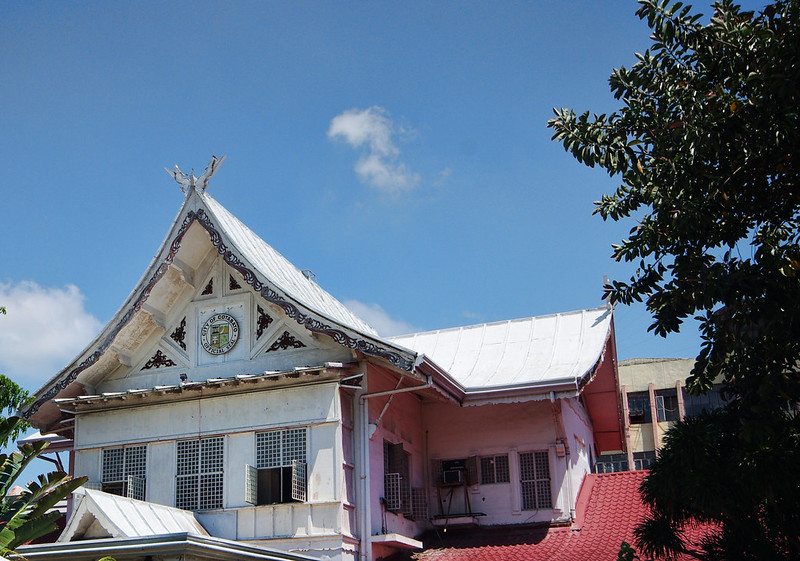 curved roofs with designs at the old city hall

While I was already in Cotabato City by this time, I was still nowhere near the center. To observe how the locals go about their weekends, I drove past Sinsuat Avenue towards the old city hall area. When I arrived, I realized the old city hall was already being used by the army. Gone was the museum that I expected to find at the spot. It was strictly off limits to outsiders and a picture was all I could muster. Still, the building is notable architecturally for showcasing Islamic styles while maintaining  a distinct Filipiniana influence. Unmistakable Malay-style curved roofs were blended with capiz windows and a plaza-style frontage to create a city hall that was unlike any other in the country. 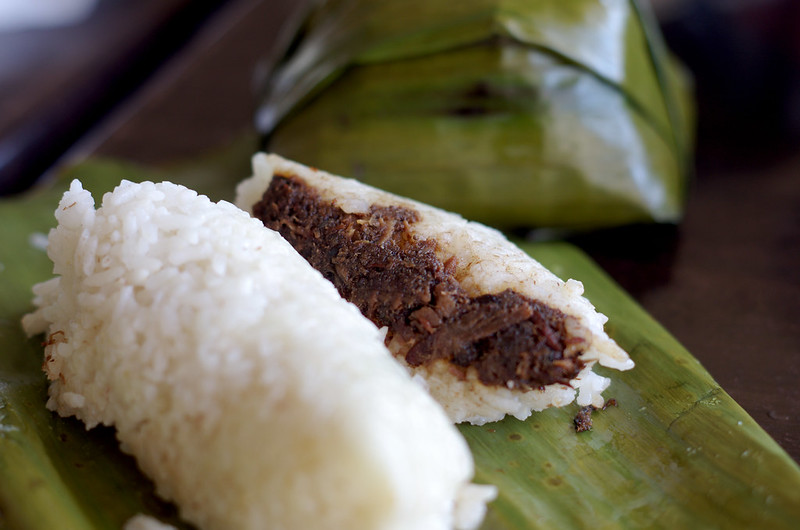 While here, I strolled around the plaza facing the old city hall and chanced upon some stalls selling one of Cotabato’s delicacy – pastil. It’s basically glutinous rice with chicken wrapped in banana leaves. It reminded me immensely of pulut panggang – a specialty in Brunei which is similar to it. 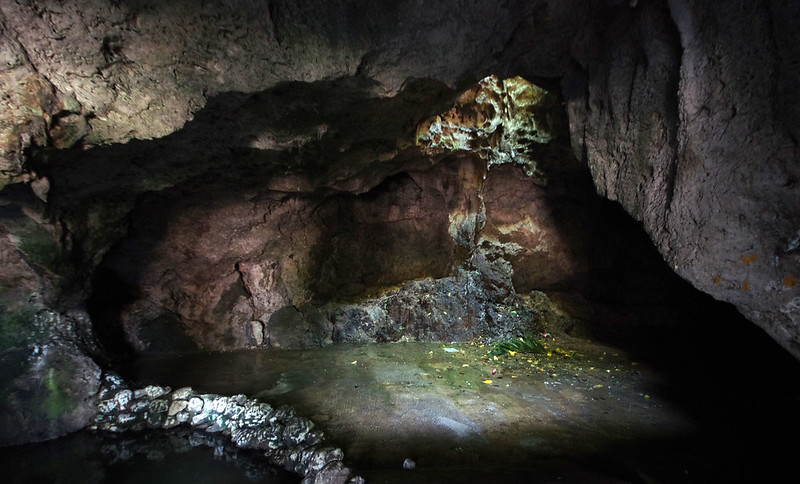 From here, I made my way to Pedro Colina Hill where I could make out some bird’s eye views of the city. Cotabato certainly seemed larger than I expected and I imagined that spot to be a perfect place to watch the sunset if only I had the time. Below the hill lies Kutawato Cave, a cave set exactly in the middle of the city. I did not bring proper lighting equipment with me and only made as far as the cave entrance but it’s entirely possible to go caving there – a unique circumstance given its urban location. It’s free as well. 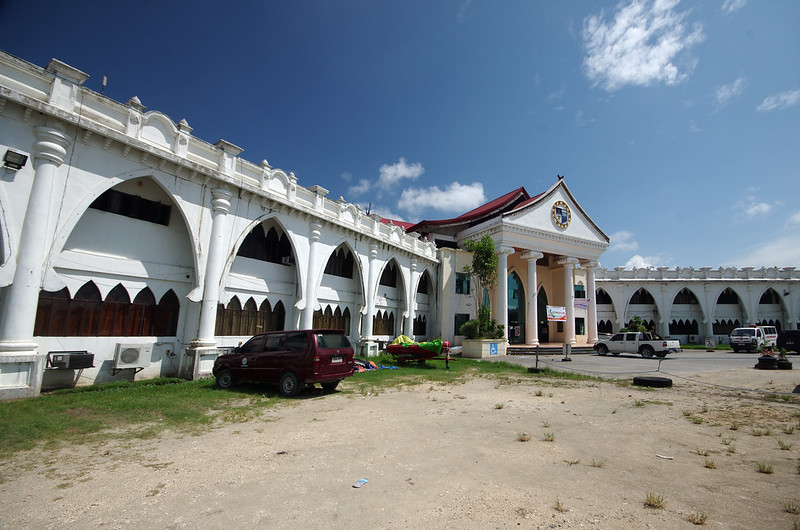 After that very brief caving experience, I returned to the city’s outskirts to visit the current city hall which locals call the People’s Palace. Compared to the old city hall, this is much grander in scale and I could see why it’s being labeled as a palace. I was allowed a look inside despite it being Sunday. It would have looked like any city hall in any part of the country with the usual offices that one expects to find like BIR and City Treasury save for the unquestionable Malay-influenced interiors. 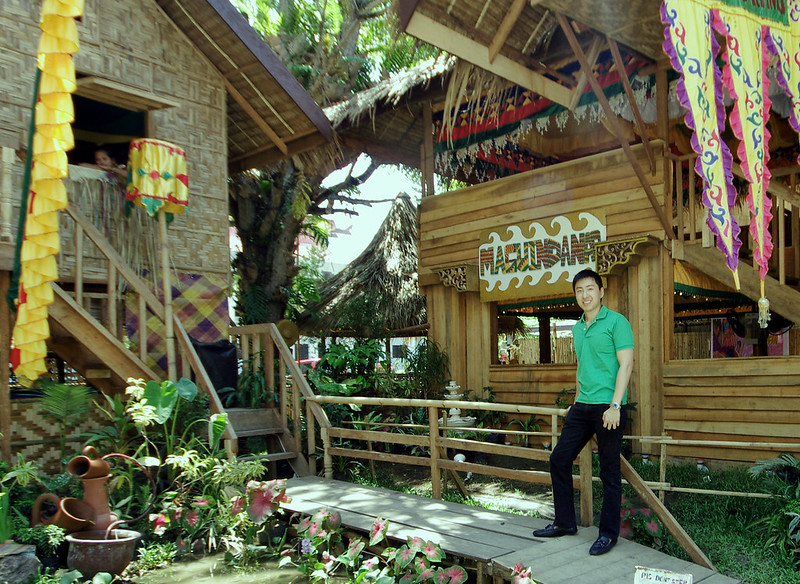 Before leaving the city, I stopped at the government offices of the Autonomous Region of Muslim Mindanao. Remarkably, Cotabato City serves as the administrative center of this region even though the city itself is not considered part of it. My visit coincided with an outdoor exhibition of native houses of the Muslim tribes of Mindanao. Featuring six tribes, the highlight of the entire exhibition was the Maguindanao section which also featured traditional weaving, brassware making and baking of local delicacies. 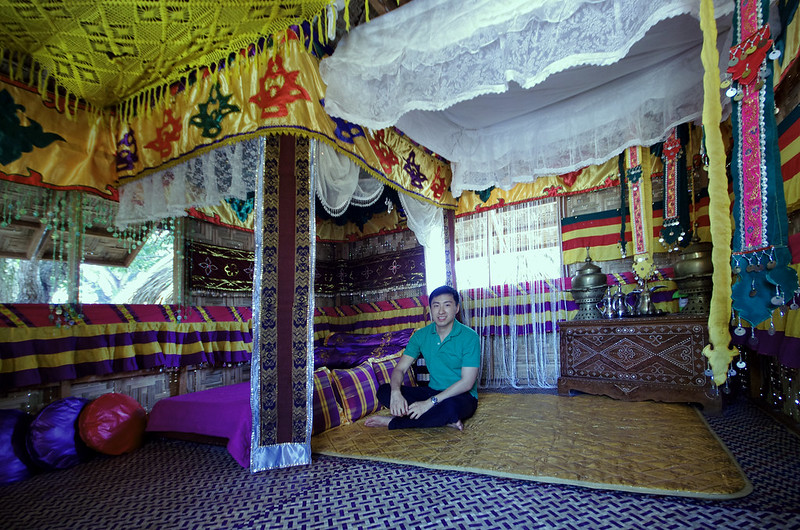 inside one of the maguindanao houses

It was here that a most amiable guide, JR Ali, toured me around the complex. I was able to witness the various facets of local life within 30 minutes, from marriage rituals to how the local sultans live. 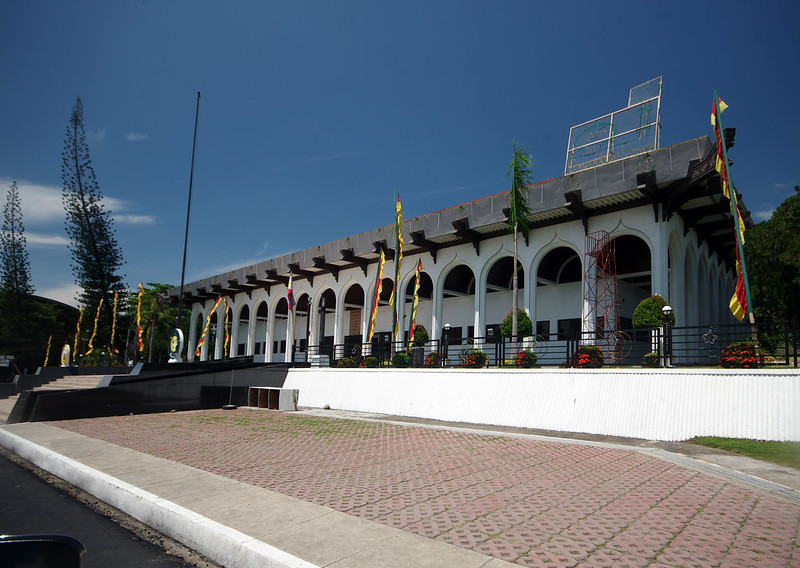 I was invited to return that evening to witness iftar or the Islamic religious tradition of breaking the fast as a community during the holy month of Ramadan. But I couldn’t stay as I was only there for a day trip and had to return to General Santos that evening. 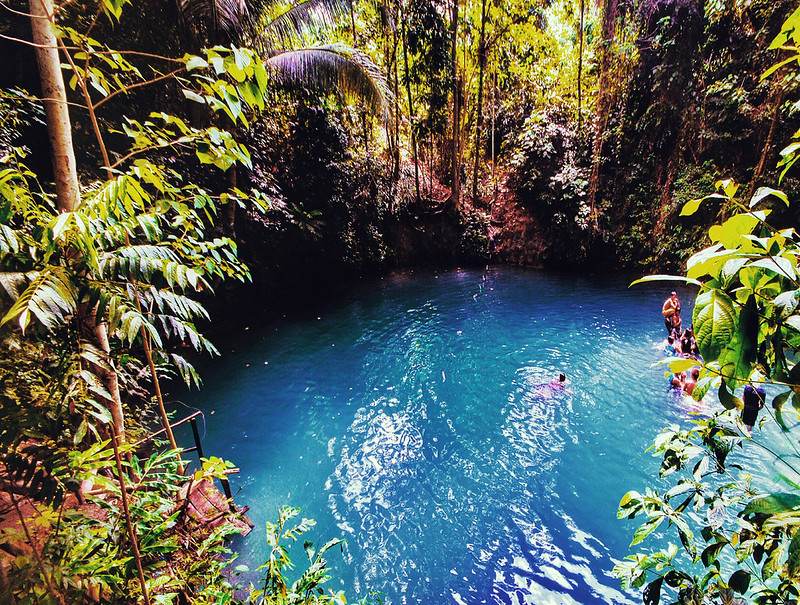 Before leaving Maguindanao altogether, I stopped by Barangay Margues in Datu Odin Sinsuat town to see what’s perhaps one of the newest tourist discoveries in the Philippines. With all the well-deserved hype around the Enchanted River in Hinatuan, Maguindanao has its own version of a deep and mesmerizing blue pool. To reach it, I just drove back along the same highway. An elementary school (Margues Elementary School) indicated that I was near. Just beside it, I found a path that led to the blue lagoon. And indeed, it was a sight to behold. What I found remarkable about the turquoise pool is how it seems to be in a body of its own, without a river or waterfall to supply water to it.

In less than a day, my excursion to Cotabato City and Maguindanao from General Santos City had ended. Contrary to what I had expected, the area did not look like a war zone. In fact, the atmosphere was as serene as any Philippine province I’ve visited, with farm animals, rice fields and village huts along the highway. But it’s always a good idea to be extra careful. I did spot several army checkpoints, though few were manned. If anything, that probably served to remind me of the volatility in the region.

Should you go to Cotabato City and Maguindanao?

Cotabato City on the surface seems like any typical city in the Philippines with life going on as normal. However, it’s always helpful to check the local situation before going. As for Maguindanao, the situation is erratic. The highways are not always safe and politically-motivated ambushes are known to occur. Foreigners are advised to go with a local if traveling to Cotabato City and Maguindanao.