We did not stay long in Tashkent before we started to make a move to one of the great silk road cities of Uzbekistan. Our first stop, and a personal highlight for me, was Khiva. The city is practically in the middle of nowhere, almost a thousand miles away from the nearest sea, lying between two deserts and lying close to the border with Turkmenistan. It is so remote that it’s an arduous 16 – 18 hour drive to the capital, Tashkent and the nearest city with at least a million people is two countries away, in Iran. It is impressive to think that this city was once part of the silk road – magic carpets could have been necessary to bring people here back then! 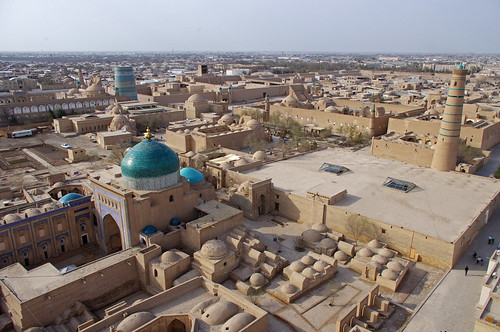 It is no surprise that this medieval desert city has been maintained very well despite the forces of time. Khiva itself is a city of 50,000 people. Though no longer as isolated as it used to be, we still had to take a 1.5 hour flight from Tashkent to the nearby city of Urgench, and then take a 1 hour car ride just to get there. 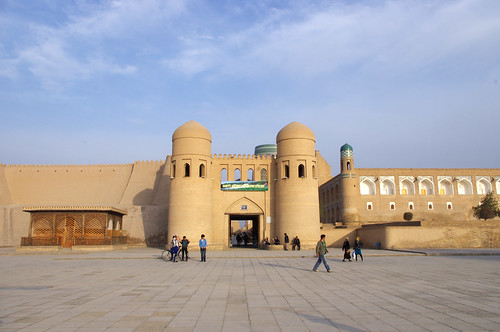 the entrance to the old city of khiva

The traditional entrance to the old city is via the East Gate (pictured above). It was once the passageway used by the silk road merchants who made Khiva as one of their pit stops. The gate is today the most preserved one in the city. 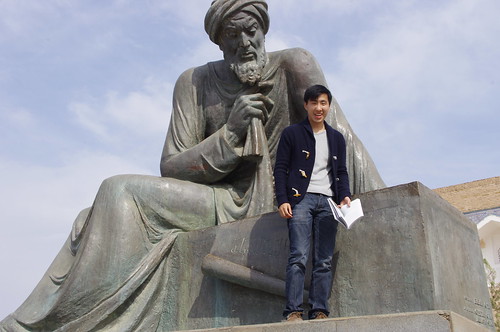 i’m no math geek but…

Just outside the gate is a statue of Muhammad ibn Musa al Khwarizmi, who is generally recognized as the founder of algebra. Math geeks may very well bow down to the said statue. The word “algorithm” was derived from his name, and also based on the region where Khiva is located (Khorezm province). Al Khwarizmi hailed from the Khiva area. 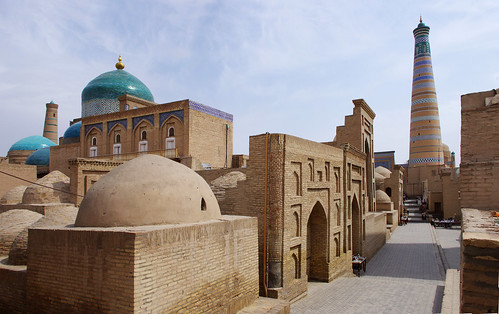 The interesting parts lie almost entirely lie within the four corners of the old city walls. The city within is also known as Itchan Kala and is today a UNESCO World Heritage Site, a living, thriving, walkable urban museum piece. Although I am no stranger to old desert cities (Yazd in Iran is another one of my favorites), Khiva certainly looked extremely well-preserved for its age and climate condition almost to the point of looking unreal. 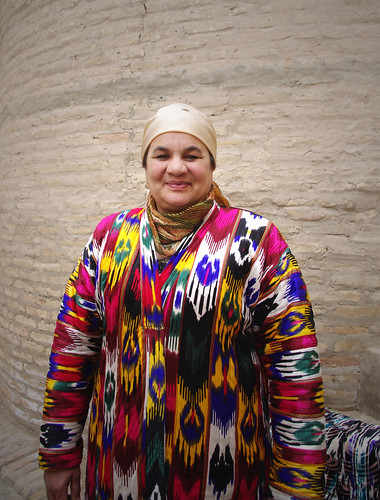 In Khiva, there are no main sights but there are tons of minor ones worth exploring. Visitors come here mainly to experience the exotic atmosphere that is almost akin to the stories in the One Thousand and One Nights. With Khiva’s turquoise domes and monochrome houses that has the same color as desert sand, one could be forgiven to think that the fabled city of Agrabah in Aladdin was set in this city despite not being considered part of the Middle East. Certainly, it is not the typical Soviet city or former Soviet city for that matter. 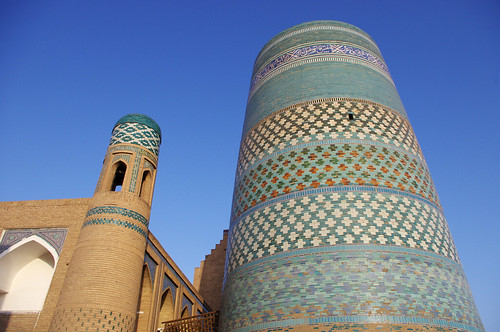 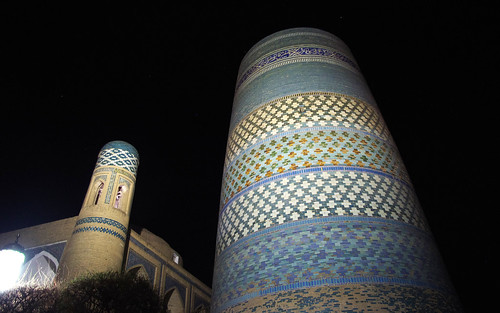 the same place at night

Our first stop was the unfinished minaret of Kalta Minor, an iconic symbol of Khiva. Lying just a few meters away from the city walls, it is a visual feast of glazed tiles that come in blue and green. Originally planned to be one of the tallest minaret in the region, it was unfinished after the original architect fled after fearing execution by the local ruler. 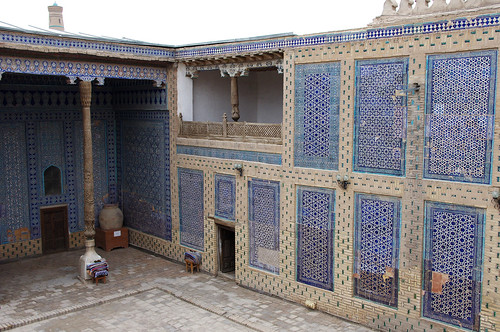 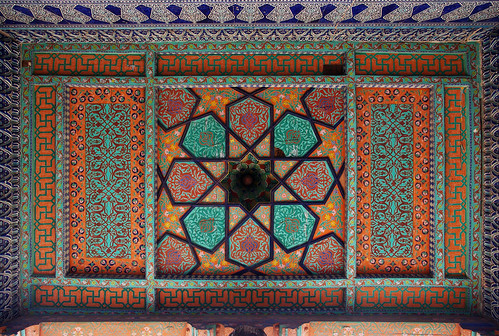 the palace of stones in khiva

We also dropped by the Tash Hauli, which literally meant “house of stones.” It was a great showcase of amazing Islamic tilework. The palace has more than a hundred rooms but the most interesting part is the Harem’s Courtyard, where the ruler’s many wives onces stayed, with its carved wooden columns, ceilings with colorful patterns and lots of carpets. 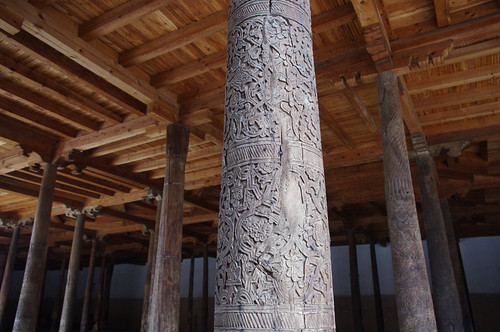 the carved wooden columns inside the juma mosque 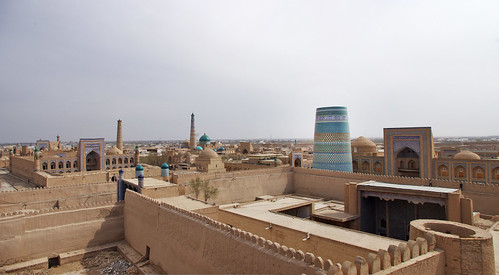 view of khiva up from kuhna ark 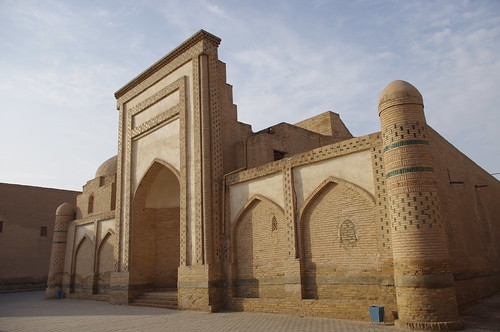 But for the HIGHEST views of the city, the best place to go to is the Islam Khoja Minaret. For around 3,000 Som (a little over USD 1.00), one can climb up the dark tower to get to the top. From here one can see far into the distance, much farther than the city and into  the desert. One can even see Turkmenistan on a clear day!

There are tons of other things we visited in Khiva but I won’t mention the rest here. These include mausoleums to various holy men, madrassas (religious schools), other mosques and the like. 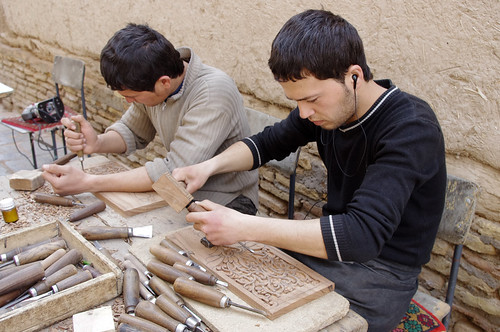 Overall, I give Khiva a two thumbs up! I was almost resigned to skipping this city during the Uzbekistan trip due to remoteness but I am glad we made the effort to still come here. Though other silk road cities had more majestic architecture, I liked Khiva’s compact, walkable and Aladdin-like old city. For those who are looking for a desert city kind of experience, this town surely won’t disappoint!

Where we stayed:
Orient Star Khiva is probably one of the most interesting hotels in town. Converted from an old madrassa, each room is technically a “cell” where Islamic scholars once stayed.  Today, one can experience that, along with modern creature comforts. Its location, just a few steps away from the East Gate, and beside the Kalta Minor, can’t be beat.

How to get there:
There are daily flights from Tashkent to Urgench, which is about an hour’s drive away from Khiva. It is also possible to fly from Moscow and St. Petersburg in Russia from where there are weekly flights.

By car, it is possible to travel to Khiva but be prepared for an 18 hour journey! 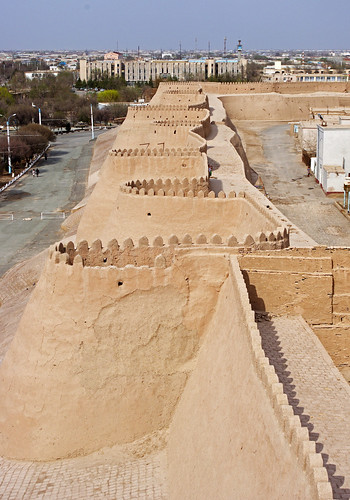 This is Part 1 of a series of posts about my trip around the great silk road cities of Uzbekistan. Click here to read about the Soviet style capital city of Tashkent, the holy city of Bukhara and the grand city of Samarkand.