“Hola!,” I awkwardly muttered to the immigration officer as I handed him my passport. Without any acknowledgement, he took a 5-second look at it, flipped to my visa page then stamped my arrival. That was fast – I was officially in Spain! In the middle of the scorching summer no less. Indeed, the warnings were very apparent, even from the beginning. August was supposed to be a bad time to visit Spain , especially Central and Southern Spain but I took it with a grain of salt. Well, I got my very first taste of the Spanish summer upon exiting Madrid ’s Barajas Airport . An oven-like heat permeated in the air. My phone’s weather app told me that it was 41 degrees in the shade. A false sense of consolation went to my head, since we were going to Salamanca , and it was only 36 degrees. 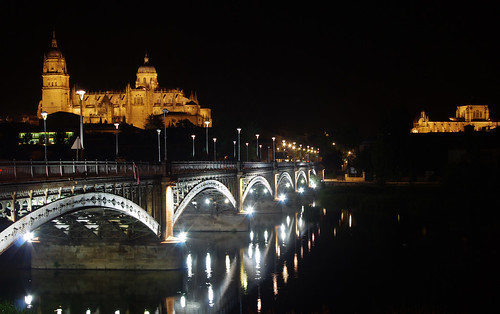 view of salamanca at night

Fortunately, there was a direct bus to Salamanca from Madrid’s airport, and the search for the bus stop allowed me to practice more Spanish than just “hola.” The trip to Salamanca lasted for around 2.5 hours. During the ride, we passed by the medieval town of Avila , with its UNESCO World Heritage city walls in plain view. Salamanca itself is not a very big town. But what it lacks in size, it more than makes up for in terms of attractions and reputation. The city is well-known as a university town and thousands of students all over the world come here to learn Spanish, where the language is considered to be in its purest form.