Novotel Melbourne South Wharf opened in March 2018 in the city’s buzzing bar and restaurant district immediately south of the Yarra River. The property is adjacent to the Melbourne Convention and Exhibition Centre and is visible even from afar. The golden glass panels of the 26 storey hotel makes it one of the more recognizable skyscrapers in the city. 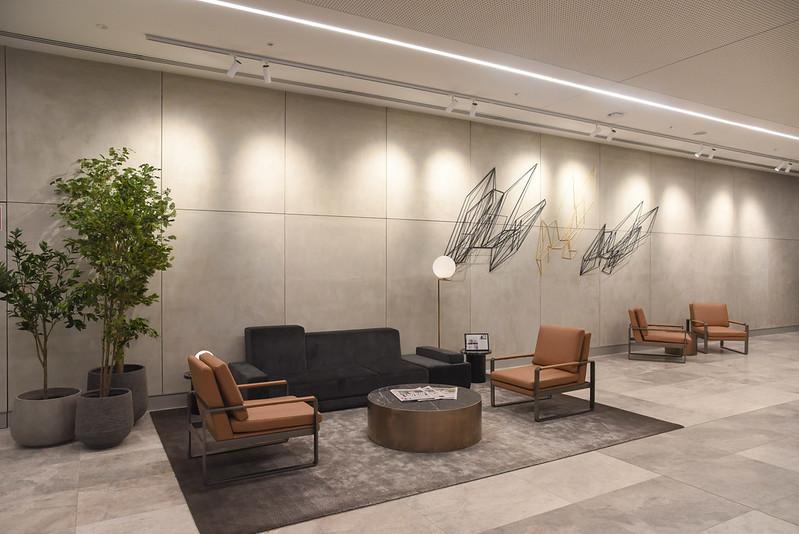 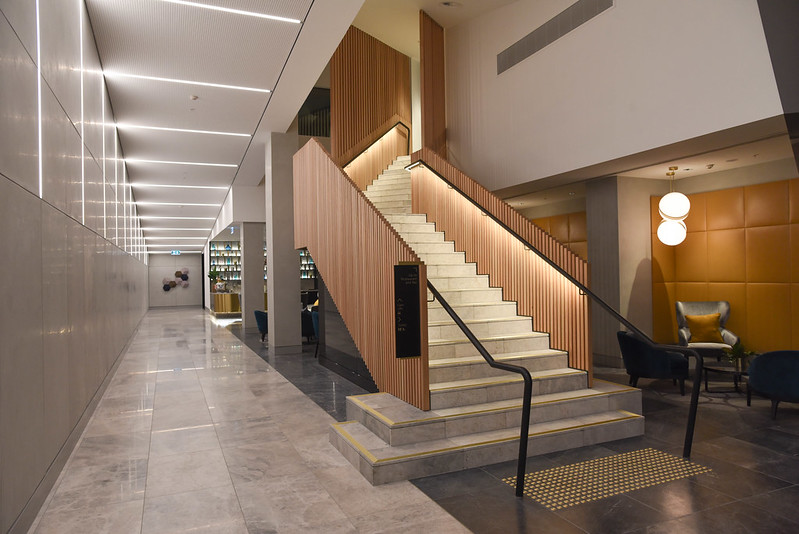 I recently stayed at the Novotel Melbourne South Wharf when I flew to the city on the inaugural Qantas flight with the Airbus A380 servicing the Singapore to Melbourne route. From the airport, the hotel is roughly 35 minutes away. While corporate guests are likely to comprise the majority here, the hotel is also conveniently located for leisure visitors. One can easily cross the bridge to catch the tram at the opposite side of the river, where rides within the city’s central core are free-of-charge.

END_OF_DOCUMENT_TOKEN_TO_BE_REPLACED

Novotel Singapore on Stevens is the latest property of Accor Hotels to open in Singapore, cementing this chain’s status as the largest in the Lion City with over a dozen hotels. The new Novotel property is located around 2 bus stops from Orchard (take the #190 bus from the Orchard Station bus stop to be exact) making the location within a residential neighborhood good for a nice escape without losing the city center convenience. 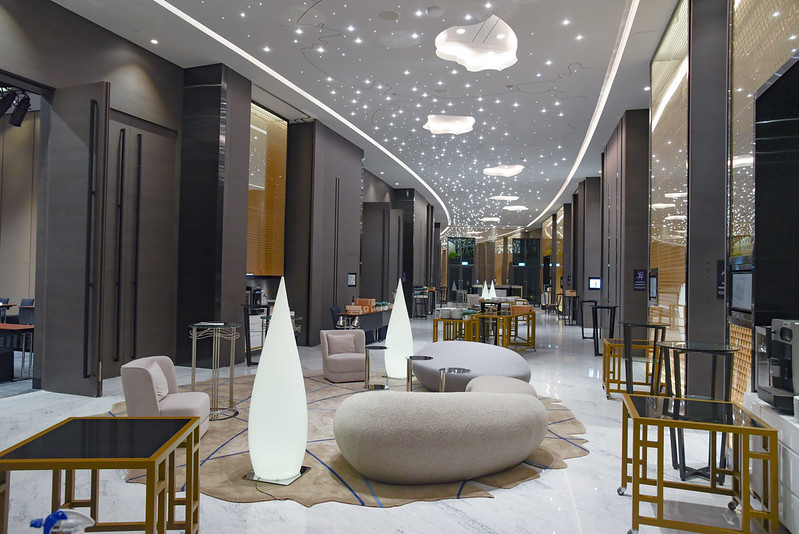 It is worth noting that Novotel Singapore on Stevens provides complimentary shuttle service between the hotel and Orchard Road. Departures occur every half hour from 10AM to 9:30PM daily with the drop-off point being the DFS Galleria at Scotts. The hotel also provides free shuttle service to the Singapore Botanic Gardens with departures at 7:30AM, 8AM, 8:30AM and 9AM from Mondays to Fridays.

END_OF_DOCUMENT_TOKEN_TO_BE_REPLACED

The Novotel Singapore Clarke Quay is located right smack at one of the most happening places in Singapore. Towering right next to Liang Court and a few steps from a number of well-known bars and clubs, the hotel is a convenient option whether or not you’re opting to dig into Singapore’s nightlife scene. That being said, Novotel has traditionally been the most business-oriented among Accor’s hotel brands and this property likewise has plenty of meeting facilities for the business traveler – including one inside the club lounge. For convenience, eligible guests at this property are also able to skip queues by checking-out online.

END_OF_DOCUMENT_TOKEN_TO_BE_REPLACED

Ever since I came home from Angkor Wat nearly 2 years ago, I’ve been dreaming of doing the major Southeast Asian temple circuit one day and visit Borobudur as well as Bagan. Well, dreams do take a long time to be fulfilled. I’ve yet to venture out into Burma and I’ve only been able to visit Borobudur last July. And the latter truly did not disappoint.

Good thing about this trip is that I had some friends who were also interested to go there. Well, they weren’t that keen at first! “Boro-whattt?” is what I heard in the beginning but after showing them some pictures of the place, it didn’t take much convincing! It was also a good thing that Air Asia started a direct service between Singapore and Yogyakarta just a few months back and the ticket prices were very reasonable. So there was really no way I would NOT go there under such circumstances! 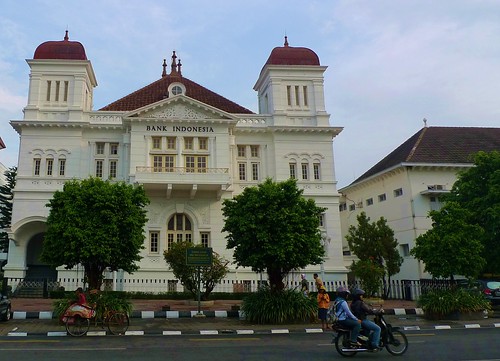 We took the two hour flight to Yogyakarta and arrived in the city at about noon. The queue in the immigration counter was very long, and each and everyone was subjected to the anti-H1N1 virus spray. After being cleansed by the spray and having our passports stamped, we boarded a taxi (fixed at IDR45,000) bound for Novotel, which was our accommodation for the trip. It was a good thing too that we got our room for only around US$55 – a steal for a hotel of its standard. After getting the keys, we basically just dropped our bags and went to have a late lunch in the mall next door. It started to rain a bit after, but that didn’t deter us from checking out the Kraton. The sultan’s palace, which is located in the central part of Yogyakarta, was a bit of a let-down. It didn’t look like a palace at all, and seemed a bit run-down. There was a tout who tried to persuade us to go to a batik showroom. We later learned that this was a common modus operandi in the area, so good thing we politely said goodbye to him when things looked suspicious. 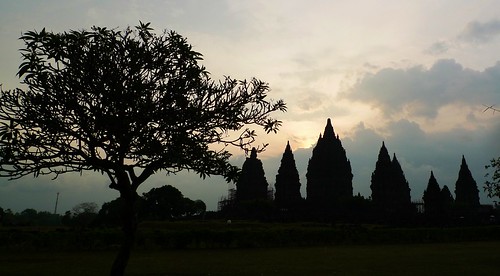 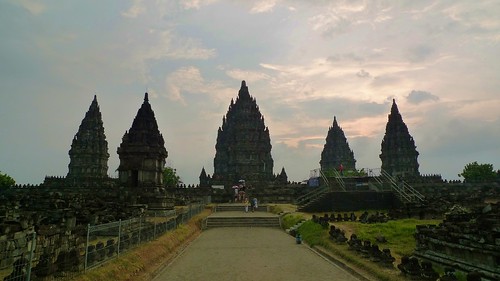 Prambanan on a rainy afternoon

Later on, we took a 40-minute taxi ride to Prambanan. The complex reminded me a bit of Angkor, although Prambanan certainly looked more well-maintained. I could see more of the finely-chiseled carvings jutting out of the temple walls. It was an amazing sight, except that the rain spoiled our view and the sky was a dull grey. We took snapshots here and there and ended up being the last visitors to leave the complex. We had to walk a long distance until we found the bus that took us back to the city. But their buses are admittedly quite clean and modern – it is also cheap! 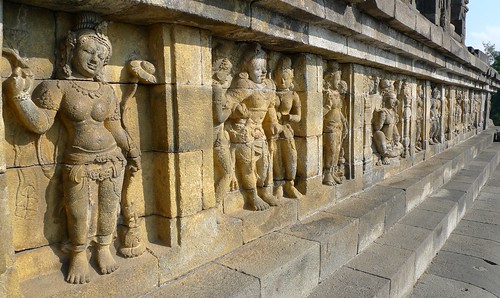 one of the lower levels of borobudur

The next morning we woke up early to venture into Borobudur. We didn’t plan on going there for the sunrise but we wanted to be there early as we had a tight schedule that day. Our driver showed up with the Toyota Innova (IDR 500,000 for the day including gas) as agreed. The drive was quite pleasant. We passed by small towns and rice fields during the 1 hour trip to the temple complex. 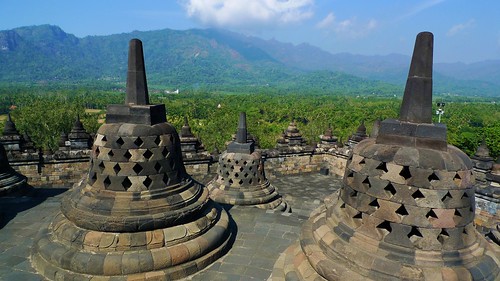 view from the top of borobudur

The first thing I noticed when I saw Borobudur was its massive size! For one single temple, it’s much larger than anything else I’ve seen. The bas reliefs were also quite detailed. Again, the temple looked more pleasing to me than the ones in Angkor. The monument has three levels – each symbolizing the 3 worlds (the world of desires, the world of forms and the formless world). It was a bit of a climb to the top, but the view was just marvelous. The highest level was filled with several stupas and one of them housed the “lucky buddha.” According to the locals, whoever could reach the buddha’s finger would be blessed with good luck. From the top, we could also see a bunch of volcanoes in the distance plus the ritzy Amanjiwo Hotel. It was a sight to behold and I could imagine what a relaxing place it could be if there were no crowds. Unfortunately, that was not the case during the time we went and almost every single corner of the monument was filled with people. It was a challenge just to take shots without anybody suddenly appearing in the corner. 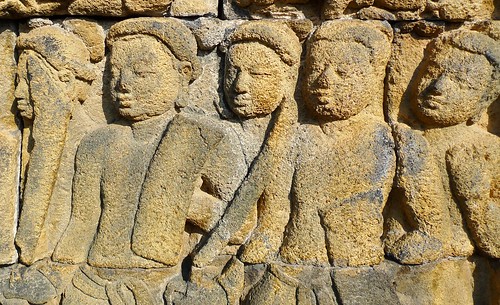 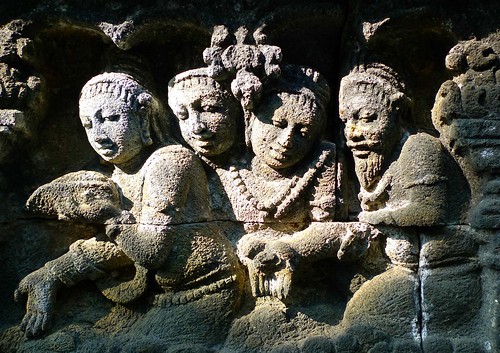 some of the bas reliefs found in borobudur

As we made our way to the exit, we were greeted by souvenir vendors who were probably the most persistent I’ve seen! They followed us all around and wouldn’t leave despite the many times I said that I wasn’t interested. My friends bought a few stuff. Come to think of it, maybe I should have brought something back, too. For what it’s worth, I was just so distracted then as my mind was occupied with the next place that we were going to. 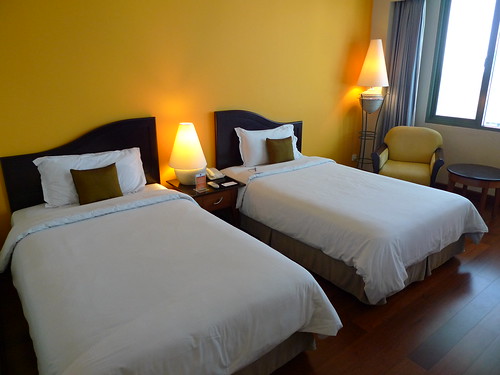 As mentioned, we stayed in Novotel Yogyakarta which cost us about US$55 which is a steal for a four-star hotel. The room was clean, spacious and painted with bright colors.