Having seen the majestic Khmer temples at Phimai Historical Park the day before, I set out to see the dramatic volcano temple of Phanom Rung and the nearby Prasat Muangtam, another highlight of the Isaan region, in Buriram province the next day. If Phimai is considered off-the-beaten path, Phanom Rung and Prasat Muangtam are considered even more so, with its middle of nowhere and hard-to-get-to location. To visit these temples, a little bit of preparation is definitely needed.

Getting to Phanom Rung and Prasat Muangtam

I was essentially looking at two ways of getting there. Via public transport, I had to get to another town called Nang Rong, a typical town in Thailand where I could catch a songthaew or minivan that goes to the temples. As I wanted to visit two temples in a day and I was coming from Nakhon Ratchasima, I decided to hire a taxi for the 2 or so hour journey.

Temple on a Volcano – The Scene Can’t Get Any More Dramatic Than This! 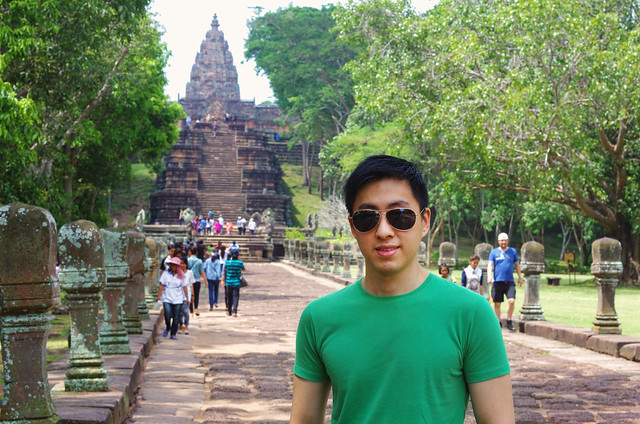 the main part of the temple is up there, on an extinct volcano

While Phimai is arguably the biggest and most extensive Khmer temple ruin in Northeastern Thailand, Phanom Rung is probably the most spectacular. The temple’s got a few things going for it. First of all, its location, on top of an extinct volcano 400 meters high is enough to draw oohs and ahs. The weather here was also markedly cooler when I came at noon, even though the temple is not really high up in the mountains.