As if a trip to North Korea wasn’t surreal enough, a standard part of every respectable “revolutionary tour” of the DPRK includes a trip down the so-called Reunification Highway for a quick visit to the Demilitarized Zone (DMZ). This very fact was all the more unreal to me, having had the chance to see the same heavily fortified DMZ, albeit from another side, some 4 years back from the south. It deeply intrigued me then. Said to be one of the most dangerous borders in the world, I saw it then as a gateway into a hermit-like nation that few people knew much about aside from its notorious reputation. Now that I was in the country with the notorious reputation, the trip down the DMZ now kind of became like a sort of irony. Instead of the DMZ serving as a gateway to the unknown, it now became that small hole into the so-called free world that I’ve been living in all my life. It was hard to believe that only some 100 kilometers away from that point where people worshipped Kim Jong Il even in his death, the streets of Gangnam in Seoul would be buzzing with Psy lookalikes and well-heeled South Koreans with the latest gadgets from Samsung.

Here’s looking at you, kid!

Rather than spend my time listening intently to the soldier talking about another one of Kim Il Sung’s heroic exploits, I spent my time making several feeble attempts at getting reception while at the DMZ (there is no roaming service at all in North Korea, and forget about the internet). And suprisingly, I did manage to get it… for a split second! So anyway, back I went to listening about the Korean War. I couldn’t help but notice how different some parts of it were to the version I heard during the DMZ Tour from the South, where an American soldier was giving an account of the same war. In the North Korean version of the story, it was the US-backed south that triggered the war by attacking first, while the western version involved Kim Il Sung making a first and bold move to recapture the entire peninsula by launching an attack. So what really happened? It’s anyone’s guess. But 60 years later, the war officially hasn’t ended yet. Only a truce was signed in 1953 and tensions have been on and off since then.

END_OF_DOCUMENT_TOKEN_TO_BE_REPLACED

Getting into North Korea is a tricky affair. Tourists aren’t allowed in except on guided tours where the guide actually follows you around the whole time! It’s also prohibitively expensive given the quality of food and lodging that you get. An alternative is to just go on a tour of the Demilitarized Zone (DMZ), which is what I did in April. It gives visitors a chance to step into North Korean territory, if only for a few minutes. There wasn’t any dramatic scenery or exotic culture to brag about, but the trip proved to be a surreal experience. 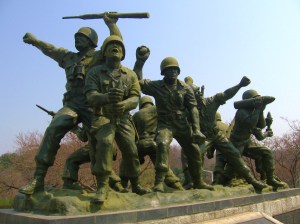 The only way to book a tour of Panmunjom from South Korea is via accredited travel agencies. We went via Grace Travel and it cost about US$45-50 per person. Basically, the tour took about 6 hours. Transportation, lunch and a guided tour was included for the price. We had to go to the Lotte Hotel in Seoul in the morning where the tour buses departed. In a mad rush, I accidentally lost my glasses on the way. But we still made it in time.

Before going to Panmunjom, we stopped by a few places including the reunification park, plus some small villages near the border. We were also shown the unused rail tracks that led all the way to North Korea. The tour itself was quite somber, with startling reminders of the Korean War and the Cold War. If I’m not mistaken, Korea remains as the only divided nation in the world – a divided nation in the sense that the Korean people are homogenous and share the same language, culture and traditions but they are split into two- and it is hard to imagine that the wealth disparity between the two countries could be any wider.

We stopped for a Korean lunch on the way to the DMZ. As usual, we were fed with an array of appetizers including the famous kimchi. Most people find Korean food to be an acquired taste but I didn’t have any problems with it. In fact, I love their cuisine. I really like their staple barbequed meats and bibimbap. Just thinking of it makes me hungry. 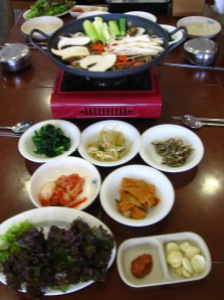 After lunch, we headed straight to Panmunjom which is the place I was really excited about. Security was tight from the time we went in. A young American soldier stayed with us the whole time inside the bus. He joked around with the group and seemed like a really nice guy. Someone in the group asked him how it was being stationed in the DMZ, and he replied that it was really boring. I’m not suprised!

We arrived at Camp Bonifas inside the DMZ and alighted in order to watch a slide show about the Korean War and a briefing about the protocol inside. We were not allowed to wave to the people in the North Korean side, make unnecessary gestures or bring cameras with large lenses. We were also given a United Nations ID in order to identify us as visitors. The whole thing really looked like a big thing to them, and anything involving North Korea was taken seriously. Of course, it didn’t help that our visit coincided with a missile test conducted by Pyongyang just a few days before so tensions were high. 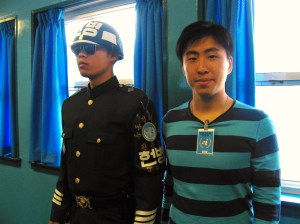 me inside the conference room

We finally arrived into the blue conference room which is divided into the North and South. It looked like a humble shack with some desks and chairs inside. A South Korean soldier was also standing guard, with a clenched fist and taekwondo pose. We were allowed to roam around the room – so for a few minutes I was technically in North Korea. From the outside, we could see the North Korean soldiers in the building on their side. They were likewise peering at us, probably wondering what sort of amusement tourists get in visiting places like these. We were also shown the North Korean ghost town, where the buildings were set up to look like the North is actually doing well. It even had a very tall flag post and a speaker blared North Korean propaganda at regular intervals. We also stopped by a monument that showed the dozen or so countries that fought in the Korean War. The Philippines was one of them, and it was the only Southeast Asian country that participated aside from Thailand. 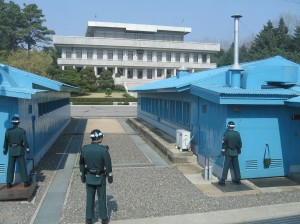 The tour ended with an obligatory souvenir store stop which to me, ruined the tension-filled atmosphere of the place. They had these North Korean banknotes for sale with the picture of Kim Il Sung, the late president of the communist North. It reminded me that my technical “visit” into that isolated country didn’t really count, and that I might come back to take another tour of the DMZ next time, perhaps from the North side. I know I will. 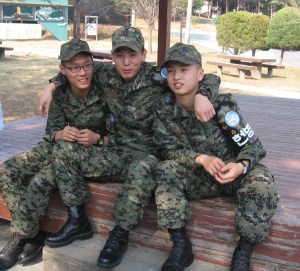