Silk Road at Amara Singapore is the property’s inhouse Chinese restaurant. The venue specializes in Sichuan cuisine but as the name suggests, exotic flavors evoking the historic trade route are also incorporated in the menu. I have heard quite a number of good things about the restaurant so I was pretty psyched to check it out when Silk Road held a media preview of its Chinese New Year menu for the Year of the Rooster (2017). 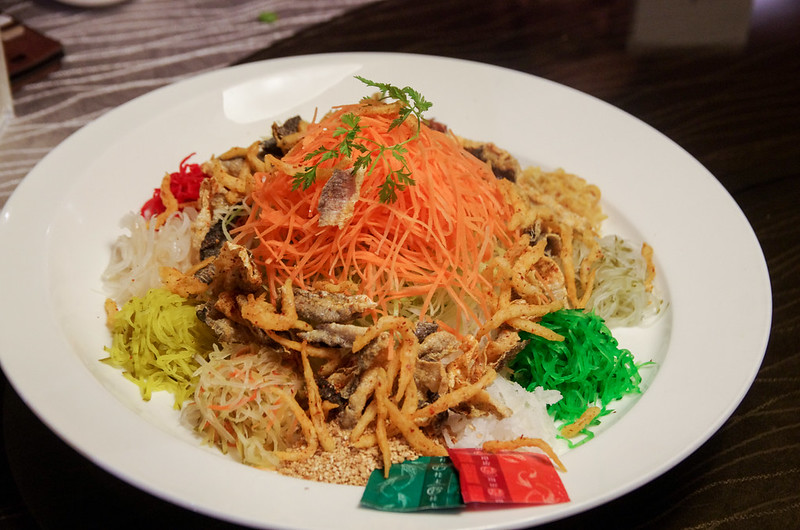 We started off with a pair of contrasting yu sheng. The first was more traditional Eight Treasure Yu Sheng with sliced abalone, crispy fish skin, golden silver fish, jelly fish, tobiko and pomelo. However, there were also slight nuances such as the usage of cured instead of raw salmon. To live up to the Sichuan proposition, the chef’s dressing was also Sichuan inspired though (thankfully for some) the spice was not overpowering. 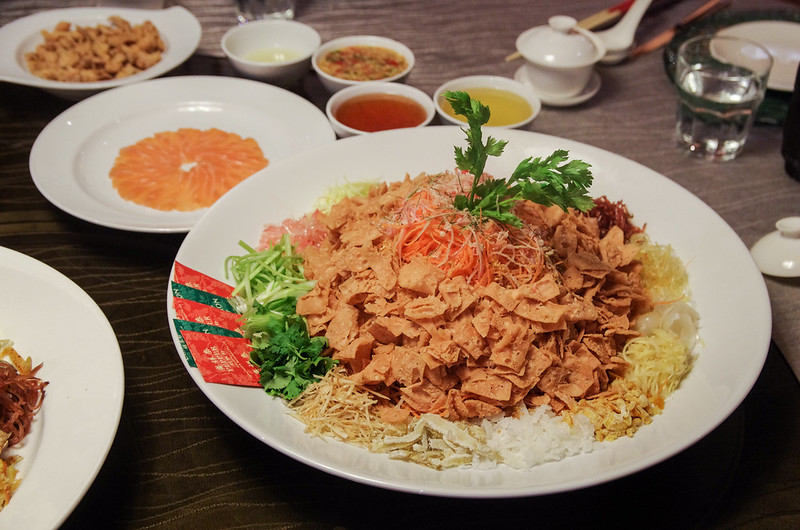 My yu sheng preference that night was leaned towards the Thai Salmon Yu Sheng which came from neighboring Thanying Restaurant. There was noticeably less meat here – the only ones being strips of chicken skin and salmon but it was compensated for by refreshing ingredients such as green mango, yam strips and fresh vegetables. The dressing comprised of a mixture of lime juice, chili padi and fish sauce. Overall, the taste reminded me a bit of Thai papaya salad with an extra crunch brought about by the chicken skin. It is definitely a dish to consider if you are tired of the usual lo hei. 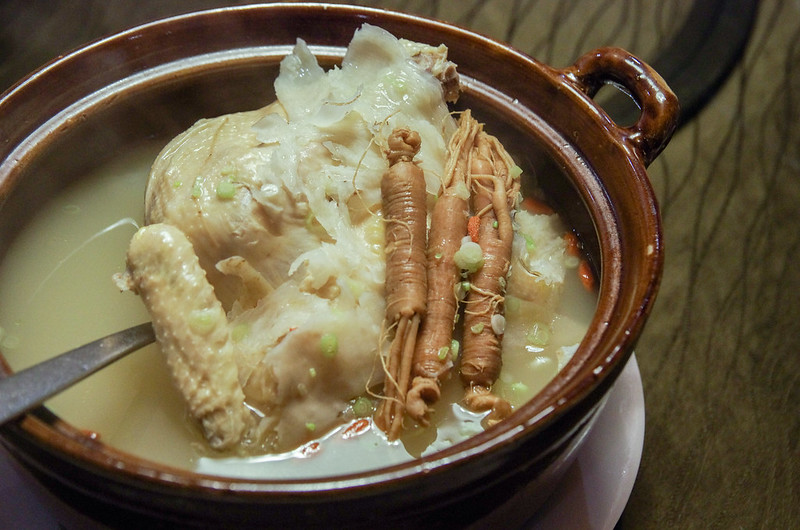 The Double-boiled Chicken Soup with Ginseng and Gastrodia Root that came next was an absolute delight. You could really taste the sweetness of the broth due to the ginseng which was provided for in generous amounts. Gastrodia root is known to have anti-inflammatory properties and I thought it provided for a nice crunch – the texture was quite similar to lotus root. 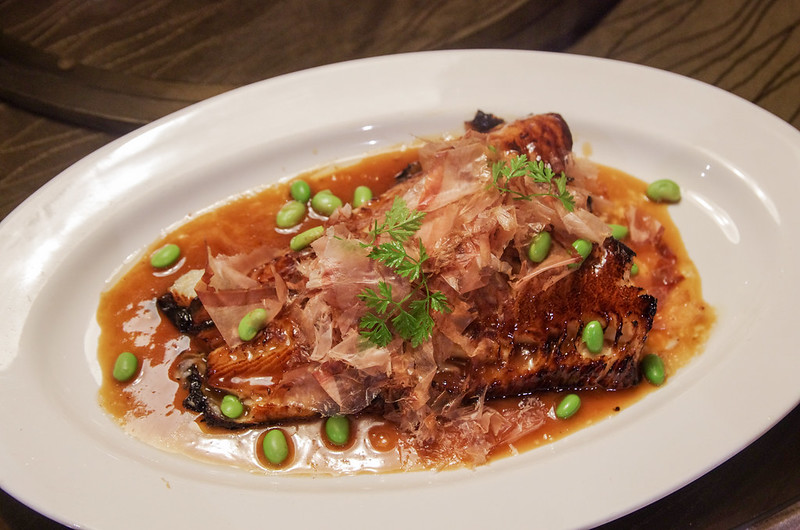 If you have read any of my past reviews featuring cod, you would know that I am quite partial to this fish. The Soy-glazed Baked Cod with Bonito Sauce was smooth, slippery and had a very soft and almost melt-in-your mouth quality. It also reminded me a bit of Gindara Teriyaki and that’s probably due to the soy base. 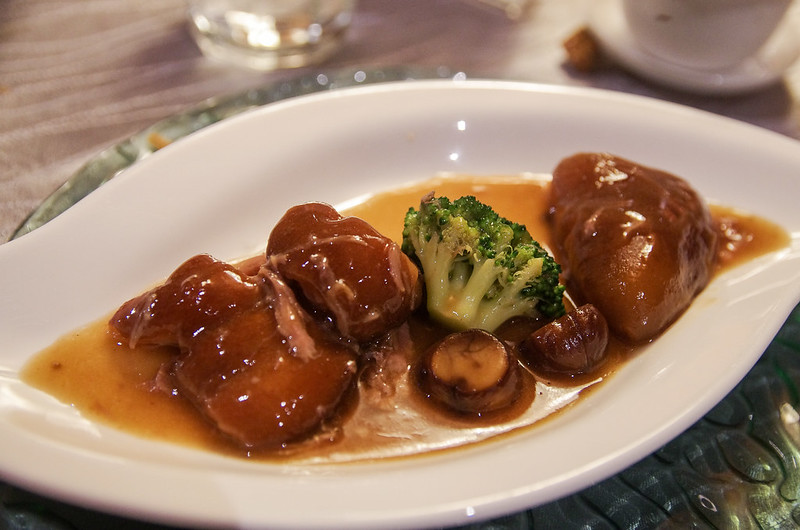 For carnivores out there, the Braised Pork Knuckle with Sea Cucumber and Chestnut was well-balanced between the meat and seafood. The pork was stewed for 6 hours over a slow fire before serving in order to ensure a succulent and tender finish and in that aspect it did not disappoint. 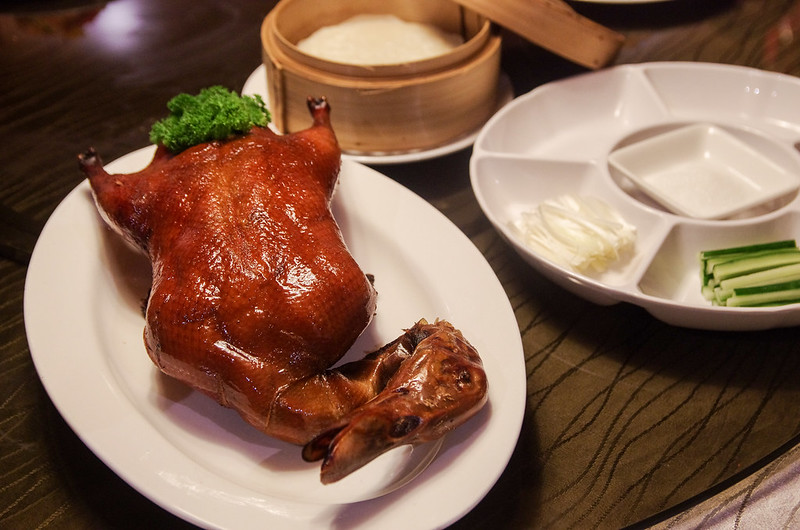 The Traditional Beijing Roasted Duck was prepared for us two ways. While it is de facto to eat the skin (soaked in a bit of sauce) in a crepe, I also managed to try just the skin with bit of sugar. While not really the conventional way of having Peking Duck, the latter allowed me to fully appreciate just how crispy the skin was. 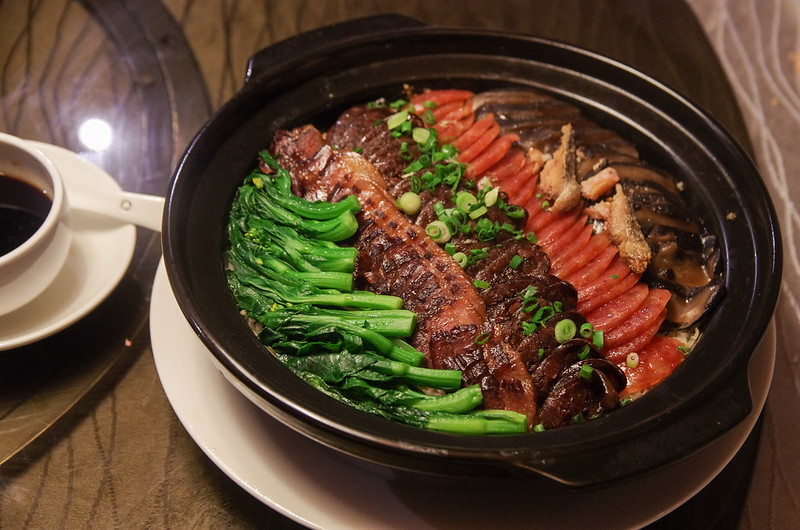 We all know that the carbohydrate dish that precedes the dessert in Chinese meals is typically meant as a filler (for people who are still hungry) but I must say I was really looking forward to the Steamed Fragrant Rice with Salted Fish, Chinese Sausage and Waxed Meat. It was served to me in a claypot and at first, reminded me of claypot rice (sans the burnt edges). The rice had an aromatic quality and glutinous texture which befitted the sausage and waxed meat. Salted fish tends to be the most prominent flavor in a dish like this but Silk Road’s version came nicely with each component making itself felt in equal measure. 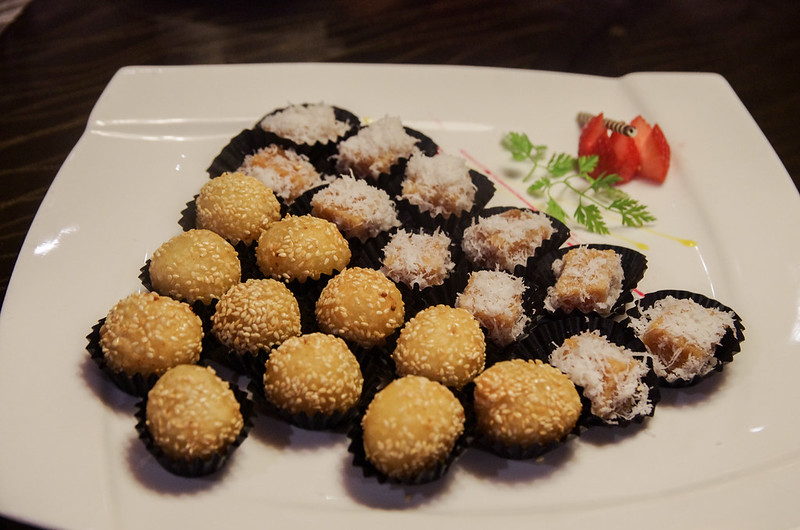 Nian Gao with Coconut Flakes and Fried Sesame Dumplings rounded up dinner. I particularly liked the crispness of the fried sesame dumplings and the warm filling within.

Not knowing what to expect initially, the Lunar New Year menu at Silk Road at Amara Singapore is probably one of the best I have tried this year. I have checked out about a dozen CNY menus so far from various hotels and I found the one here to be refreshing and creative. There was nothing outlandishly surprising about the dishes – just plain old goodness and clever use of ingredients.