Given the vastness of Russia, a visitor can come here for any number of days and find that they’ve barely scratched the surface of what this northern country has to offer. A cross country trip would easily entail a medium-haul flight so it is perhaps not surprising that most visitors concentrate in the main touristic centers between St. Petersburg and Moscow, the capital. If you are visiting Russia and have around one week to spare, here is a suggested itinerary for you to follow. 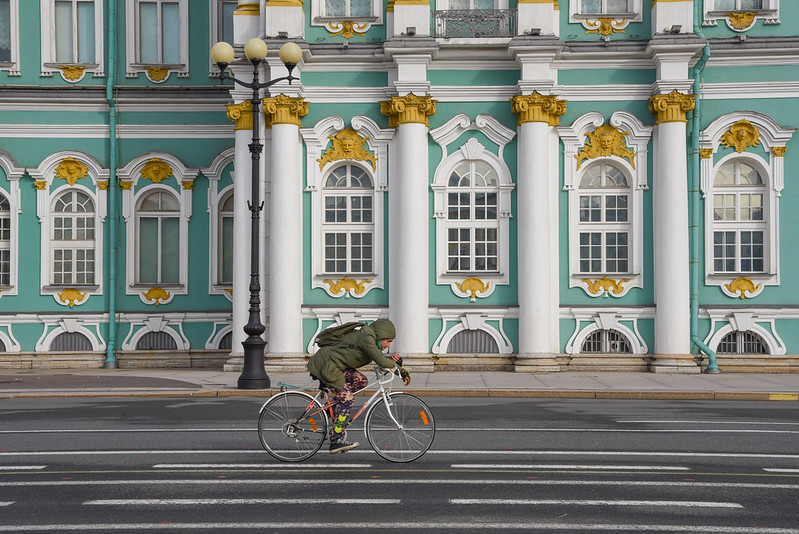 exterior of the hermitage

You could start in St. Petersburg or Moscow, it doesn’t really matter. During my trip, I entered Russia via St. Petersburg. One of the most visually stunning cities in Europe, St. Petersburg was the capital during the Tsarist era when Russia was still a monarchy. Today, remnants of these imperial splendors are very much evident through the baroque and neoclassical architecture within the city center.

Tip: Much of St. Petersburg’s historic center is comprised of small islands connected by drawbridges. These are drawn daily from around 1:20AM until just before day break. If you find yourself in one of these islands during the wee hours of the morning, you might end up getting stuck until sunrise so be mindful of the schedule.

Obtain your bearings at the Hermitage (skip queues and purchase discounted tickets here) which houses a massive collection of art from around the world. This museum houses works by Michelangelo, Rembrandt and Leonardo da Vinci among others. When visiting the Hermitage, it is advisable to purchase a ticket online to avoid the long queues. If possible, ask a local to help you book or get the hotel concierge to help you in order to buy at a cheaper rate from the Russian language version of the website. If you are a real museum buff, you can easily devote a today exploring the many nooks and crannies but if like me, you are a casual visitor then 2 hours should be enough.

A lunch option I would recommend is Duo Gastrobar (8A Kirochnaya Street, +78129945443). Do call in advance to reserve a table. My favorites include the beef tartar and crunchy pork ribs.

After having your fill in the museum, head to the St. Petersburg Mosque. Built in the Uzbek style, the mosque was patterned after the tomb of Tamerlane in Samarkand. It was closed during the communist era until Sukarno, the former president of Indonesia, requested it to be reopened during a state visit to Russia.

From the mosque, it is just a short walk to the Peter and Paul Fortress. The impressive complex houses a church containing the tombs of Russia’s czars. Entrance is free though you need to pay admission to enter some of the churches. 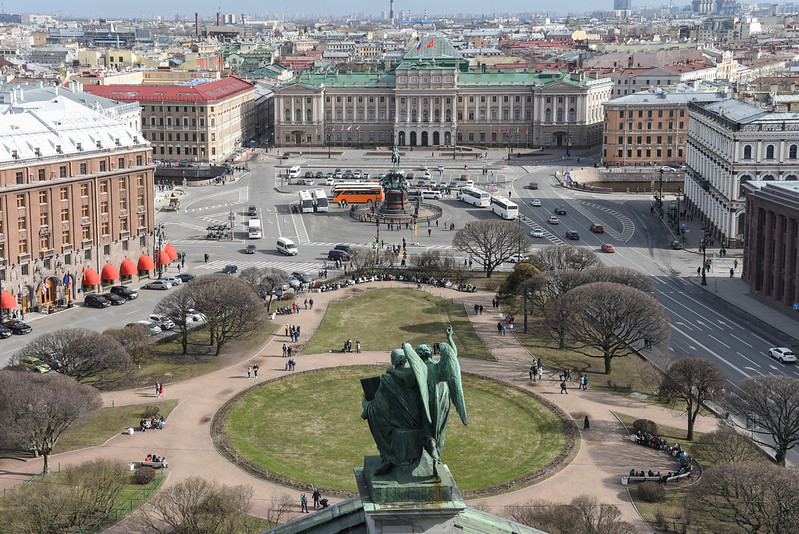 views of st. petersburg from the observation deck of st. isaac’s cathedral

Head back to the historic center by late afternoon to admire the low-rise skyline of St. Petersburg from the observation deck of the St. Isaac’s Cathedral. From there, it is a short walk to Gorokhovaya Street, the hipster district of the city. It would well be dinner time by the time you get here. A restaurant I highly recommend is Clean Plates Society (13 Gorokhovaya Street) with its delicious array of steaks, burgers and even local food. 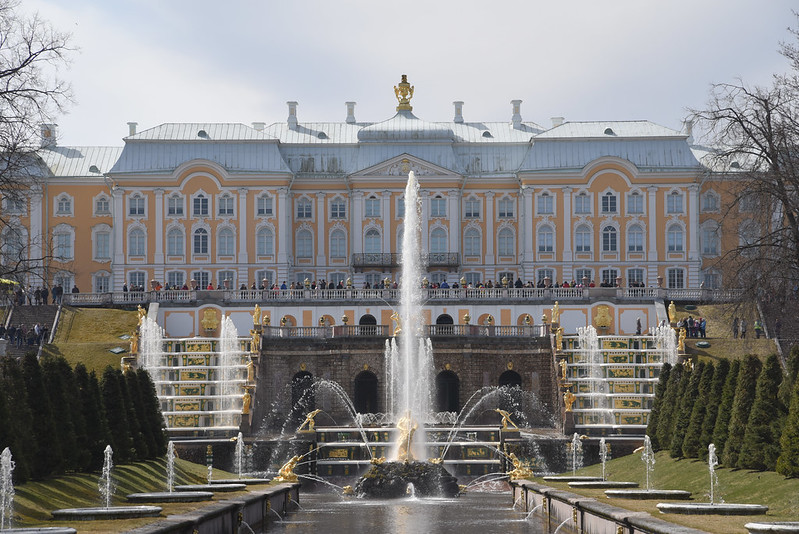 The two main day trips from St. Petersburg that most visitors take are Peterhof and Pushkin for the splendid palaces found in these towns. Peterhof (discounted tickets here) is known for the Russian-style Versailles that was built during the reign of Peter the Great. While it is possible to enter the palace, the highlight is undoubtedly the gardens featuring a cascade with golden statues and chessboard flooring. Allow at least a few hours to soak in the grandoisity of the lanscaped areas.

From Peterhof, you can easily take an UBER to Pushkin which is home to the Catherine Palace. 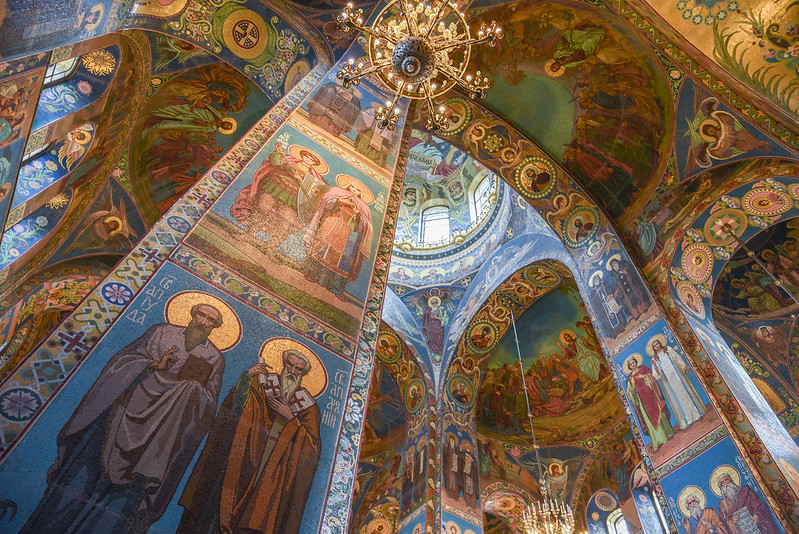 church of the savior on spilled blood

This day can be spent visiting the attractions you missed out during the previous days. A stroll through the main drag, Nevsky Prospekt, is worthwhile for the stunning architecture. You will also encounter the Kazan Cathedral and the Church of the Savior on Spilled Blood. The latter is highly recommended and well-worth the admission to enter. The interiors are as stunning as the colorful bulbous domes you see from the outside.

Although not typically included in the standard tour of St. Petersburg, a visit to Yusupov Palace is a must. Historically, the house is known as the place where Rasputin was murdered but the interiors offer a peek at how late 19th/early 20th century Russian nobility lived. The palace has plenty of impressive rooms including the Moroccan-inspired drawing room and the humongous theater.

For lunch, I suggest heading to Restaurant Schengen (5 Kirochnaya Street), a casual cafe with everything from risotto to open-faced sandwiches in a cozy atmosphere. The tables facing the floor-to-ceiling windows are the best. This is a great place to visit for lunch as you get 20% off until 4pm if coming during a weekday.

The rest of the day can be spent strolling around the historic center to admire the many churches, palaces and museums or if you’re done with St. Petersburg, hop on a train or plane to Moscow.

The frenetic megacity that is the capital of Russia could not be more different than St. Petersburg. Moscow is Europe’s largest cities and its many ring roads personally give off reminders of other megacities such as Beijing. With gnarling traffic and an overwhelming road network, Moscow takes time to appreciate. 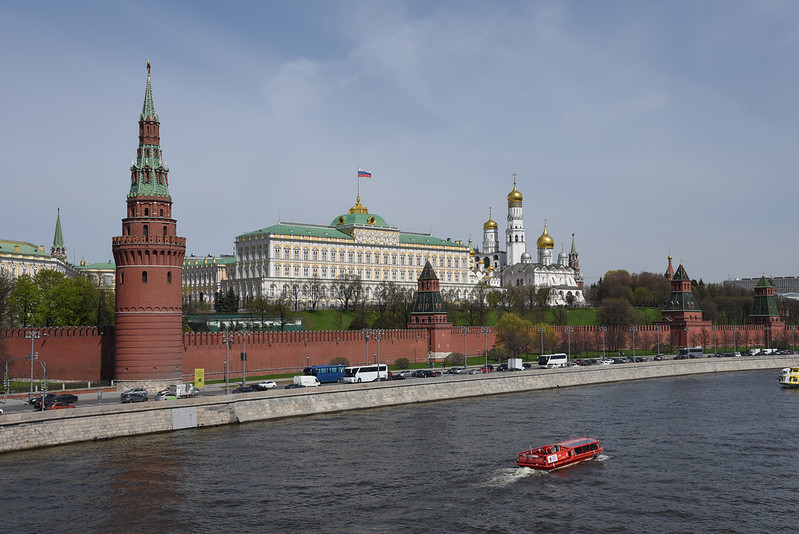 Start your trip in Moscow by visiting the Kremlin (discounted tickets here). This is Russia’s seat of government and houses a number of churches and an armory aside from the parliament buildings and the president’s residence. You will need to book way in advance if you wish to enter. 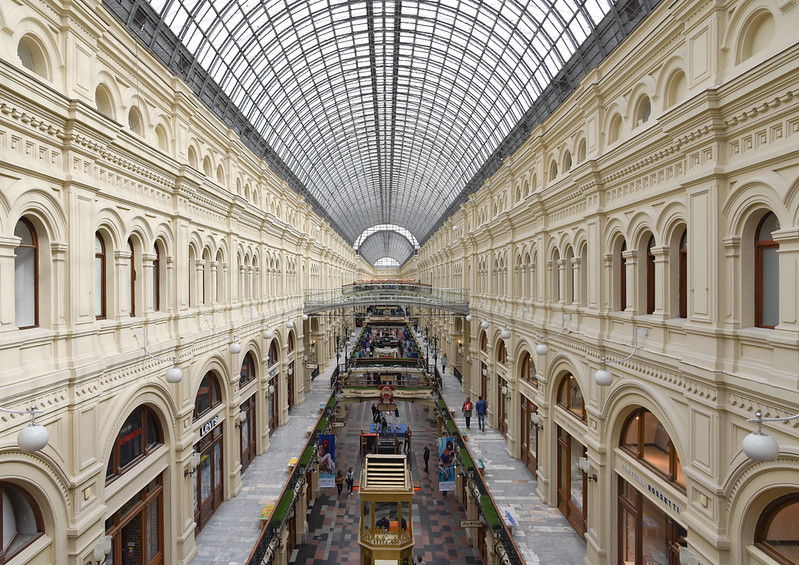 From the Kremlin, it is a short walk to the Red Square where Moscow’s famous military parades are held. During normal days, it gets overcrowded with tourists scrambling to get a shot of the colorful St. Basil’s Cathedral. The nearby Lenin’s Mausoleum has free admission and is opened daily except for Sundays, Mondays and Fridays. Venture into the upscale GUM with its impressive architecture. The caviar shop at the ground floor is a popular place to bring pack some premium gifts for loved ones. For a bird’s eye view of the city, head up to the rooftop bar of Ritz Carlton Moscow called O2 Lounge. The drinks and bar food are pricey but the views are sublime. 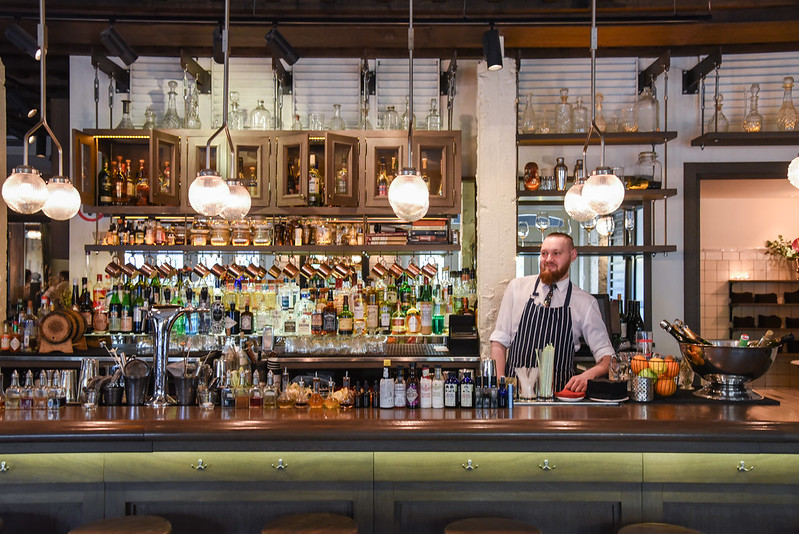 Walk up Tverskaya Street to do some window shopping. This is one of Moscow’s main shopping streets and you can easily spend hours here. End the day at Patriarch’s Ponds just west of Tverskaya. The area offers a slower pace of life than what its downtown location suggests and in recent years, has become a magnet for hipsters. You will find no shortage of hip and happening bars and restaurants in this area but one I would recommend is Saxon + Parole (12/9 Spiridon’yevskiy Pereulok).

Walk by the riverside until you reach the Cathedral of Christ the Savior. This relatively new construct was rebuilt only in the 1990s after the fall of the Soviet Union, with the original church blown up on Stalin’s orders. This is the tallest Orthodox church in the world. From the pedestrian bridge leading to it, you can get some sumptuous views of the Kremlin.

From the cathedral, take either bus #255 or M3 towards the direction of the Novodevichy Convent. Its location just next to a pond makes it a wonderful photo opp especially with the convent’s array of towers and bulbous domes. 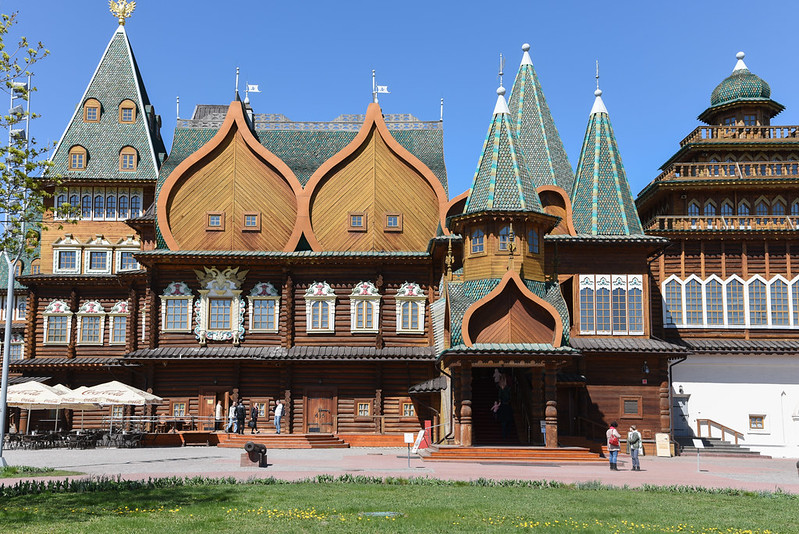 the wooden palace at kolomenskoye park

Among Moscow’s many parks, my favorite (aside from Patriarsky Ponds) is Kolomenskoye Park. Make no mistake about it – this is not your ordinary walk in the park! What makes the place special is the fairy tale-like wooden palace that was originally constructed during the time of Tsar Alexis I. It subsequently fell into disrepair and the current one you see is a reconstruction from 2010. Apart from this palace, the Ascension Church located within the park is also worth a look. It has been inscribed as a UNESCO World Heritage Site. To get here, the nearest train station is Kolomenskaya. 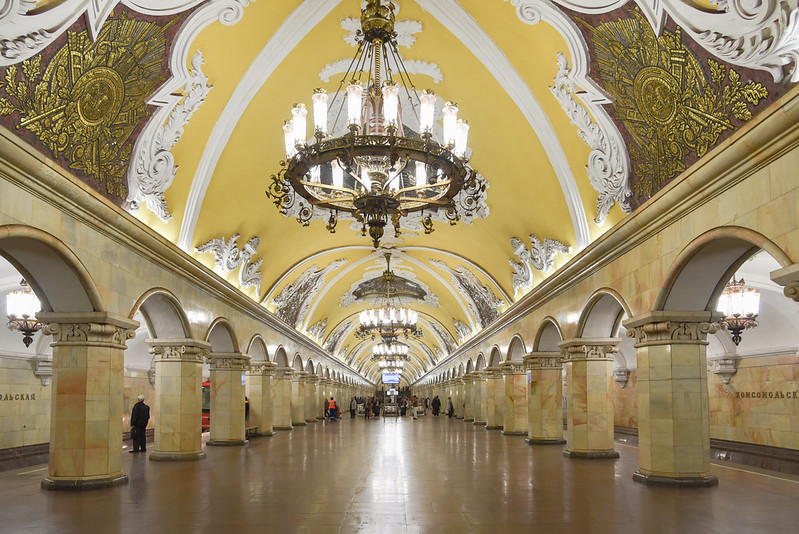 A trip to Moscow is not complete without exploring its marvelous metro stations. Visiting these stations on your own can be daunting especially if you don’t know how to read the Cyrillic alphabet. The major stations near the tourist spots have Roman alphabet as well but those outside the center usually don’t.

You can easily spend half a day exploring the metro stations which have some distinctive designs but if you need to cut it down to a few, you’ll need to check out the following: Mayakovskaya Belorusskaya, Prospekt Mira, Novoslobodskaya and Komsomolskaya with the last one being the grandest of all. 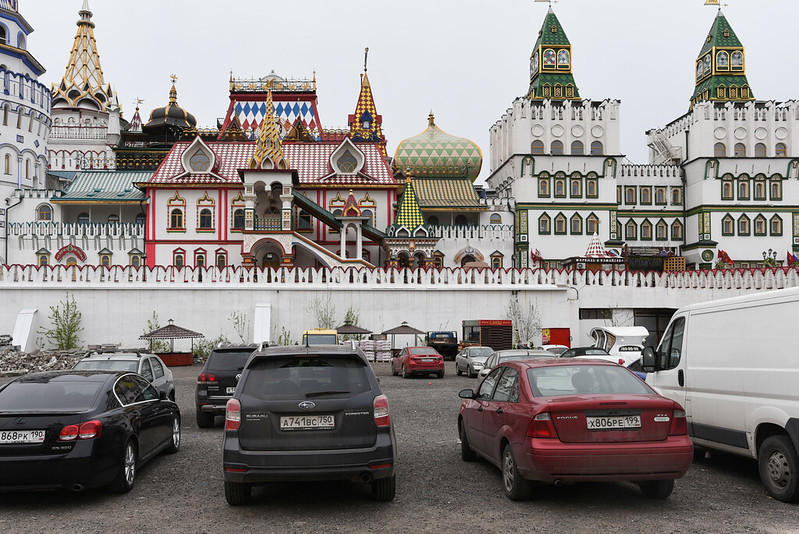 One of the most outrageous examples I’ve seen of Russian architecture is the Izmailovo Kremlin located in the east. Although looking more like a theme park these days, the buildings inside are colorful and instagram-worthy. You’ll also find a wooden church within the complex. 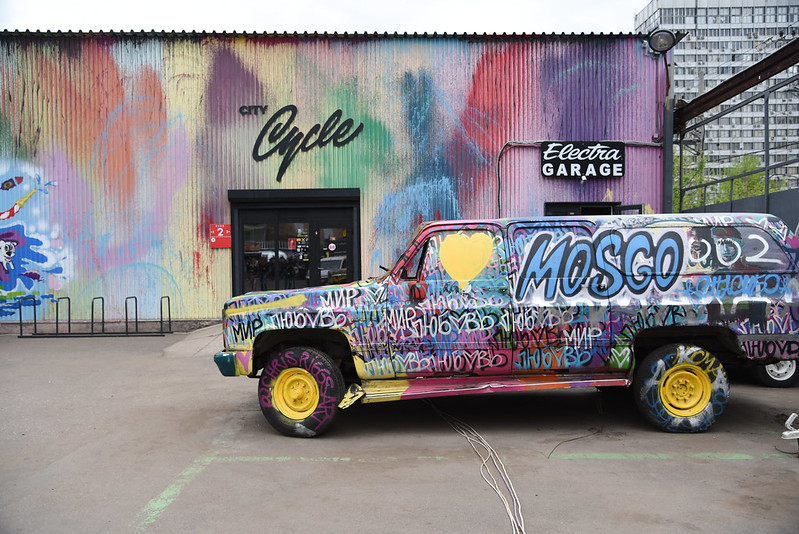 To check out where Moscow’s hipsters hang out, you’ll need to venture to Flacon, a series of warehouse converted into shops, art galleries, cafes and clothing stores. You’ll find plenty of brands here that are sold nowhere else in the city. Alternatively, you can also trying making the trip to Vinzavod in the Basmany District for its eclectic art galleries.

One of the poshest places to eat in Moscow is Cafe Pushkin and this is where most high end tourists go but I would suggest going instead to Bolshoi Restaurant (Petrovka Ulitsa) if you are seeking for a fine dining place. The food here is loads better and less pretentious. It’s also around 30% cheaper than Cafe Pushkin without scrimping on the ambiance.

Tips for Traveling Around Russia

Where to Stay in Russia

St. Petersburg – The Crowne Plaza St. Petersburg Ligovsky is very convenient with its located just across one of the biggest shopping malls in St. Petersburg. Nevsky Prospekt is also just a short walk away. Rooms are decked in palatial decor without losing out on modern creature comforts. Prices are also reasonable.

Moscow – I particularly liked the InterContinental Moscow Tverskaya as the service there was the best I’ve encountered in an InterContinental hotel. Breakfast is overwhelming with plenty of choices while the location right smack in Tversakaya and a short walk from bus stops and the metro makes commuting extremely easy.