The humble, newly proclaimed city of Balanga is probably not a place where one would expect to find a boutique hotel of international standards. Relatively untouristed, Balanga has a population of less than 100,000 and is often a transit point for those heading to the tourist attractions of Bataan. It was actually by accident that I discovered The Plaza Hotel in Balanga, Bataan. I was reading about how the plaza mayor or the central square of Balanga, Bataan was being spruced up to look similar to those in Spain when I chanced upon the property. Located right smack at the plaza mayor, the hotel facade was constructed in the Spanish colonial style and looks especially atmospheric in the evenings when floodlit. 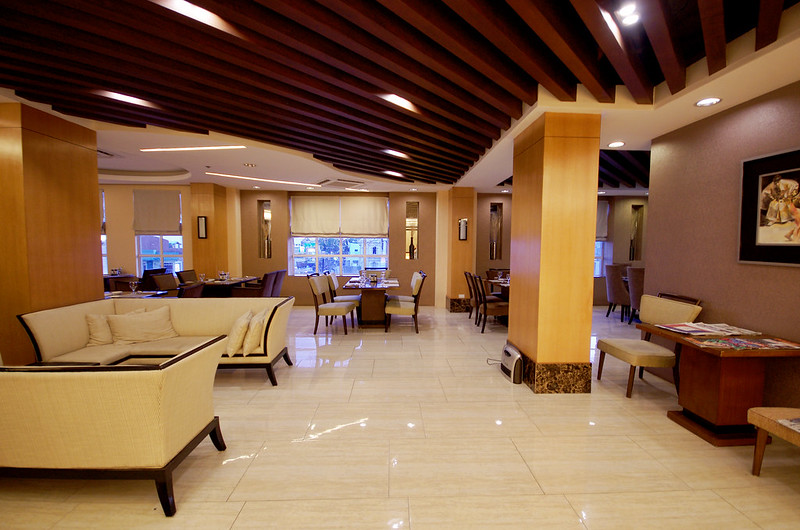 During a short trip to Bataan, I decided to check out Balanga and in turn, stayed overnight at the Plaza Hotel Balanga. The first thing I thought of when I arrived at the property was the plaza mayor of Salamanca in Spain which it has an uncanny resemblance to. Even the hotel looked similar in style, with the lobby at a higher (3rd) floor. The elevator however, was more modern at The Plaza, with touch sensors to  navigate between floors. 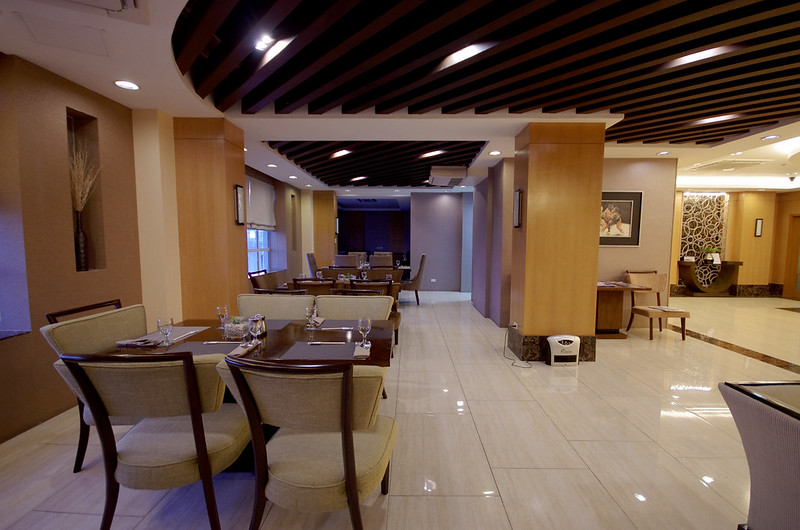 The main area of The Plaza Hotel Balanga is located at the third floor. This is where the lobby as well as the in-house restaurant, Cafe Kyoto, are located. I had booked for 4 rooms and my check-in experience was pretty quick. We were given our keycards within a few minutes. 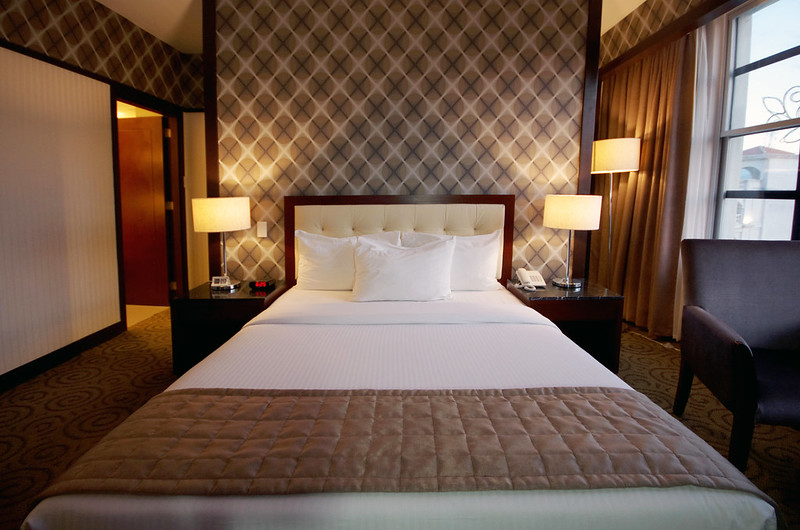 I had the Maria Clara Suite as my room during my stay. Overlooking the plaza mayor, it was considered a suite due to its relatively bigger size, at 34 square meters, compared to the normal rooms which average at 24 square meters. For a room that’s truer to the name, the hotel has the Presidential Suite which has a separate living area. 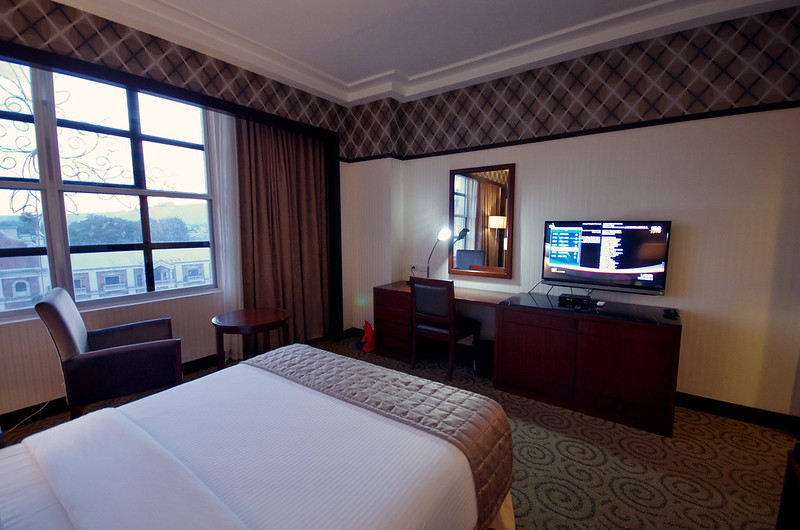 My room featured understated tones and exuded a tinge of Euro grandeur with crosshatch wallpaper, neutral colors and relatively modest lighting. The Maria Clara Suite has a divider between the bed and the closet area which features plenty of space to store one’s clothings as well as a counter to make coffee or tea. I was particularly pleased with the in-room entertainment options. While flat-screen TVs are practically the norm these days, there was plenty of specialty channels to watch including sub-channels from HBO which are rarely found. 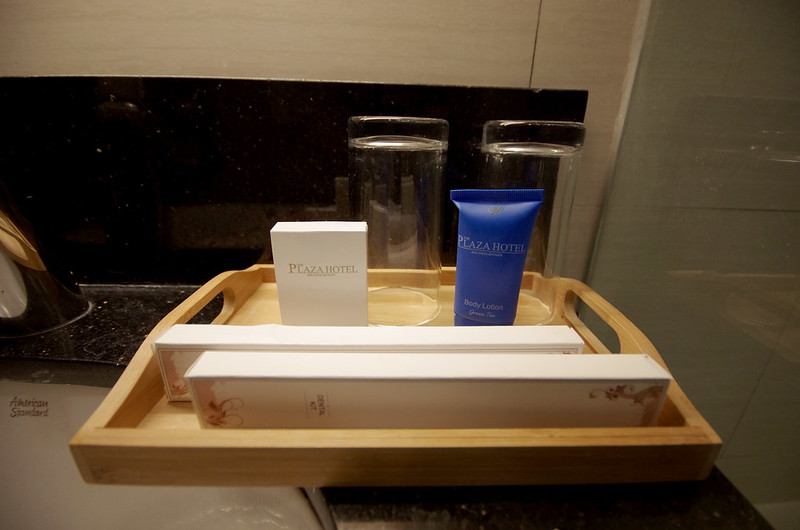 The bathroom contained a tub which would have been nice for a soak if I stayed longer. Nevertheless, I was pleased with the quality of towels used, the thicker variety that can absorb moisture quicker similar to those found in more upmarket properties and which seems to be a rarity in hotels in the Philippine provinces. 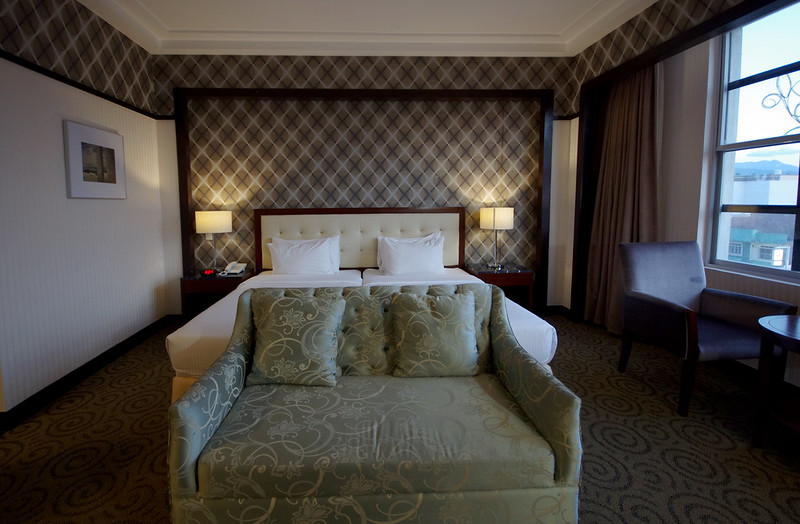 a peek at the plaza view junior suite

I got to check out some of the other rooms while I was there. The Plaza View Junior Suite deserves a special mention for having the best balance between value and ambiance. It’s similar in size to the Maria Clara or Ibarra suites but is slightly cheaper per night due to the absence of a tub. If you don’t plan on having a soak during your stay, do consider booking this room.

Being a boutique hotel, the property has no swimming pool. However, there is a balcony on the 6th floor which makes for a good rooftop bar. There are sweeping views of the plaza mayor below which as I’ve mentioned repeatedly is especially wonderful to look at during sunset when the buildings start getting floodlit. 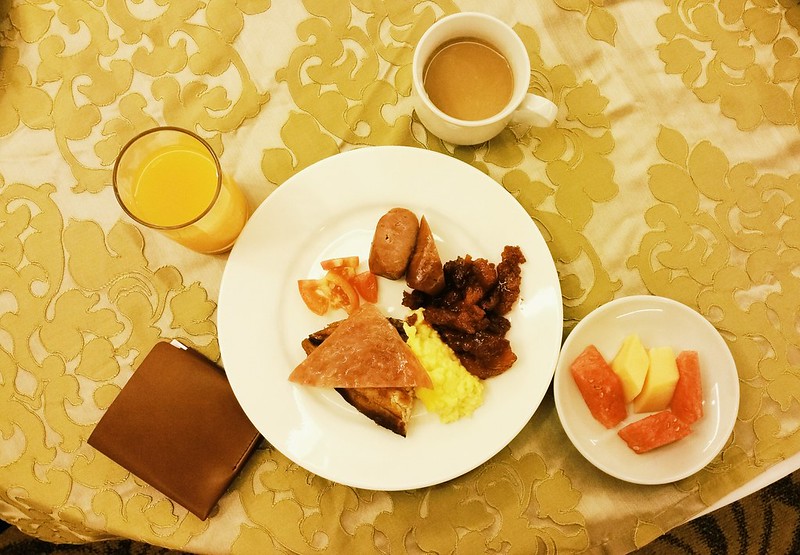 breakfast at plaza hotel balanga, with my grandee by anma gosling wallet

My stay came with breakfast which depending on the occupancy, is either the ala carte or buffet type. As I was there during a national holiday, the hotel decided to hold a breakfast buffet at one of the function rooms. The dishes on offer were in line with other hotels of similar class – tocino, scrambled eggs, longganisa (Filipino sausage), ham, dried fish, fruits and vegetables. While the variety was meagre, the buffet was surprisingly good.

After we had checked out and departed from Balanga, my father mentioned that he left his shirt behind inside the closet of our room. A prompt SMS message to the hotel reception sorted it out. The staff took the shirt for safekeeping and when we returned to Balanga a week later, it was handed back to us with no fuss.

Outside of Manila and the major tourist centers, the quality of accommodation is often seriously lacking. It was thus a pleasant surprise to find a property that not only looks good in terms of aesthetics but also gets the F&B and service aspects right. Undoubtedly the best hotel in the province of Bataan, the Plaza Hotel Balanga is a rare gem that other provincial hotels can learn a thing or two from.