Wandering through the streets of Phrae in Northern Thailand, I could not help but get a sense of deja vu as I surveyed the walled old town and the many photogenic temples, teakwood mansions and museums dotting the enclosure. My guidebook described Phrae as having similarities to Luangprabang in Laos and surveying the sights around me, I’m inclined to agree. Phrae to most is a rather unknown place, even for Thais as its namesake province only came into Thailand’s (then known as Siam) control around a century ago and its relative “isolation” is part of the charm. 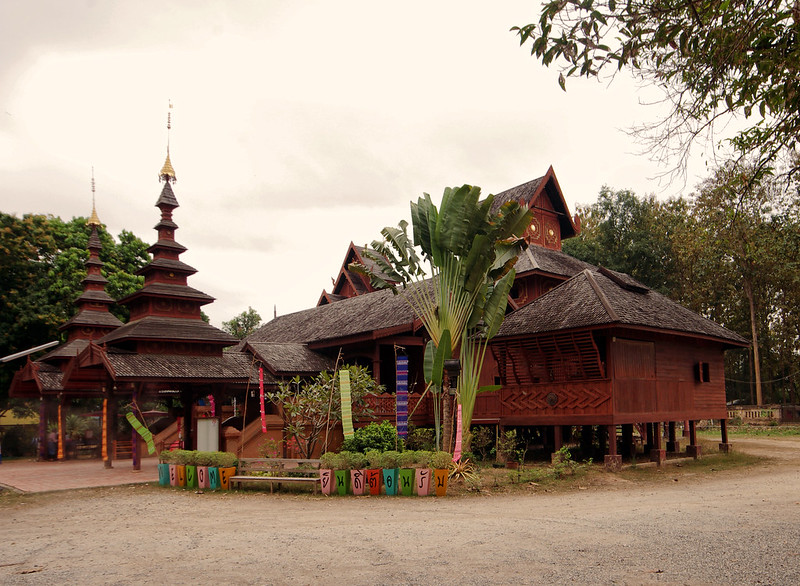 With a population of slightly less than 20,000, Phrae is a rather quiet town with its tourist attractions concentrated mainly inside the walled city. I had visited during a weekend but found other tourists sparse, local weekenders included. After getting off the bus from my 2 hour journey from Nan, I immediately walked towards Wat Chom Sawan which is just a few blocks away. I was struck by the unusual architecture of the main prayer hall. departing from the Lanna style that I see all over these parts. Most guidebooks describe the style of Wat Chom Sawan as Burmese, but having visited Burma a couple of times before, I really could not see the similarity. The temple is noted for the heavy use of wood and multi-tiered roofs, a style which is pretty unusual for Thai temples. 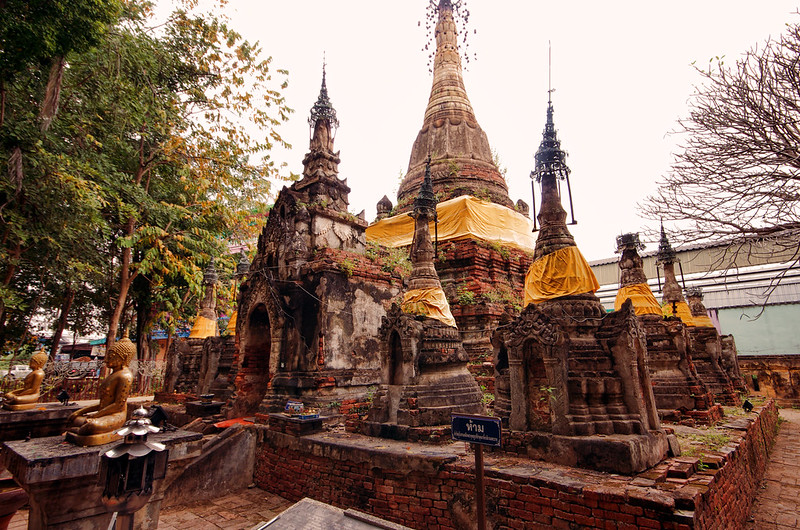 From there, I walked towards the old city. Walking in Phrae, I found, was a lot more pleasurable than walking in other Thai cities. The roads are rather narrow but the lack of cars on the road, especially inside the walled city, made walking here a relaxing activity.

After making my way inside the old town, I stopped by Wat Phra Bat Ming Muang Worawihan – the first temple that one usually sees when entering the walled enclosure. It’s not the most atmospheric of temples. The number of buildings in the area and cars on the parking lot make it appear a lot busier than it really is. 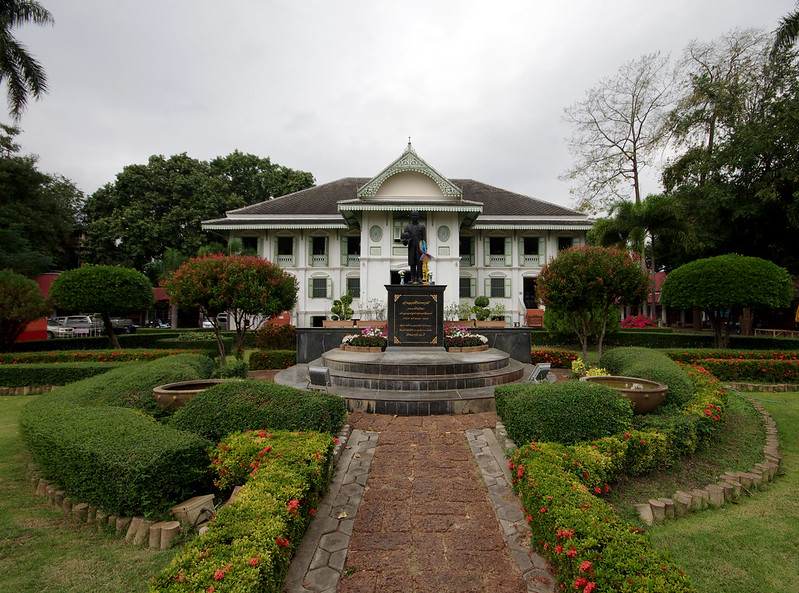 From there, it was a short walk towards the scenic roundabout where many of the town’s attractions are situated. The Old Governor’s House, an antique mansion with a tinge of European influence, is situated just west of the roundabout. There’s no admission to be paid to enter the building where the King and Queen of Thailand once stayed when they visited Phrae. The things on display here give visitors a glimpse of life during the turn-of-the-century. For those feeling adventurous, they can enter the dungeon which is locatated by the basement. There are some graphic details there on how they used to torture deviants back in the day. 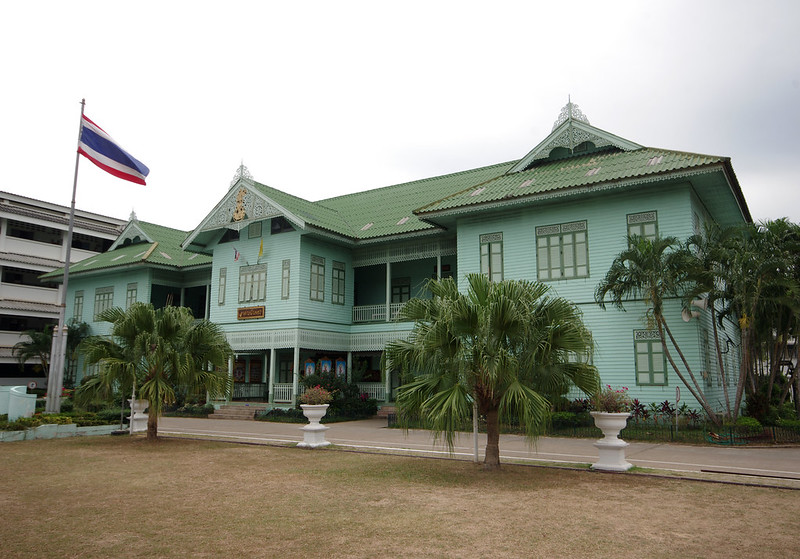 Some of the government building here carry a colonial vibe, including the school situated just opposite the mansion which is still in use today. 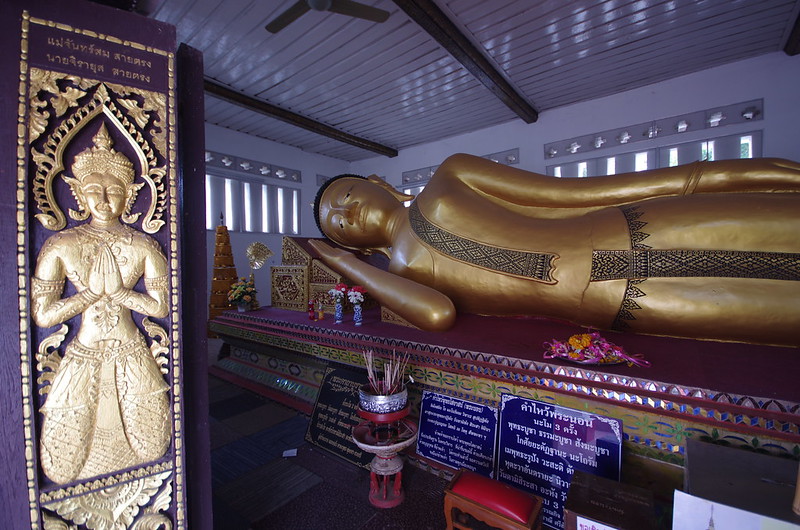 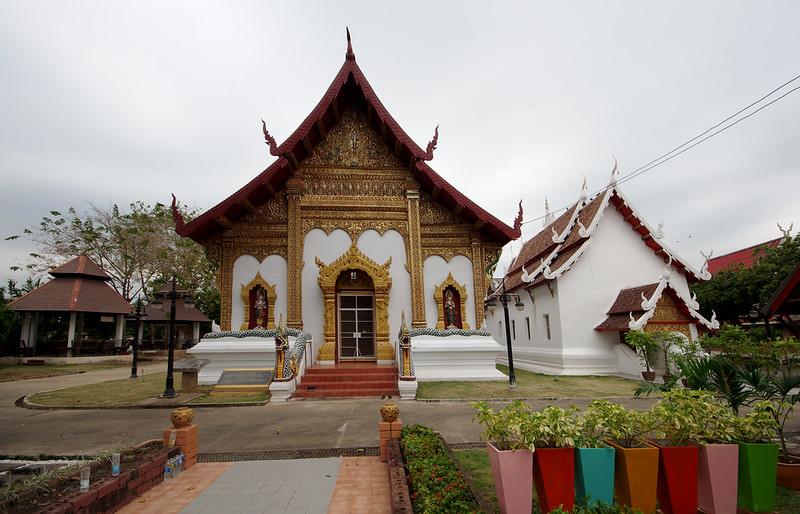 From there, I checked out a couple more temples, including Wat Phra Non with its reclining Buddha, Wat Pong Sunan with an even bigger reclining Buddha and the town’s oldest temple, Wat Luang. 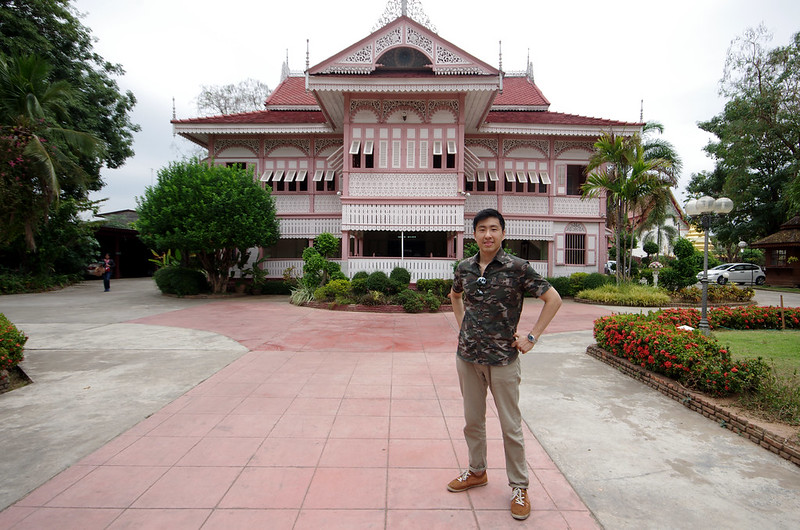 The most famous among Phrae’s antique houses is perhaps the pinkish Vongburi House (admission: 30 Baht) which again has displays and artifacts from the late 19th/early 20th century. Although it was actually built by Chinese artisans, the design carries a strong European influence. Of note are the intricate carvings on the gables which reminded me in some ways of the mansions found in Louisiana in the United States. 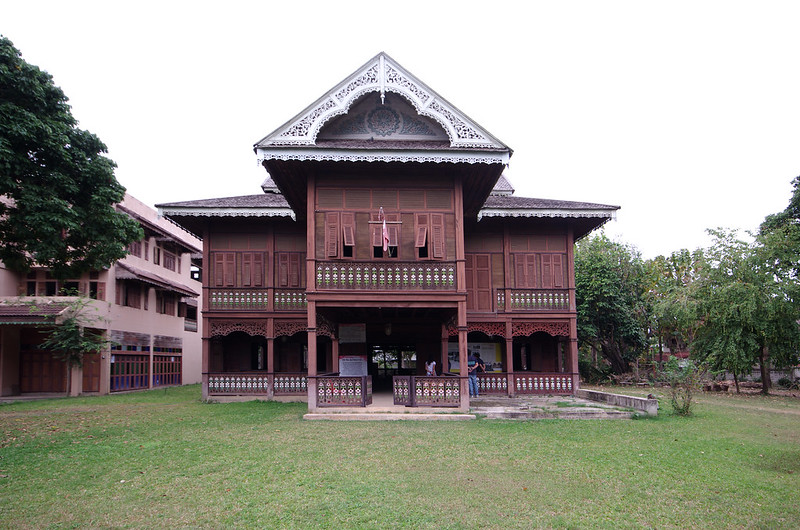 Another one of the town’s mansions – the Vichairacha House was empty on the inside, save for some dioramas that describe the mansion’s history. 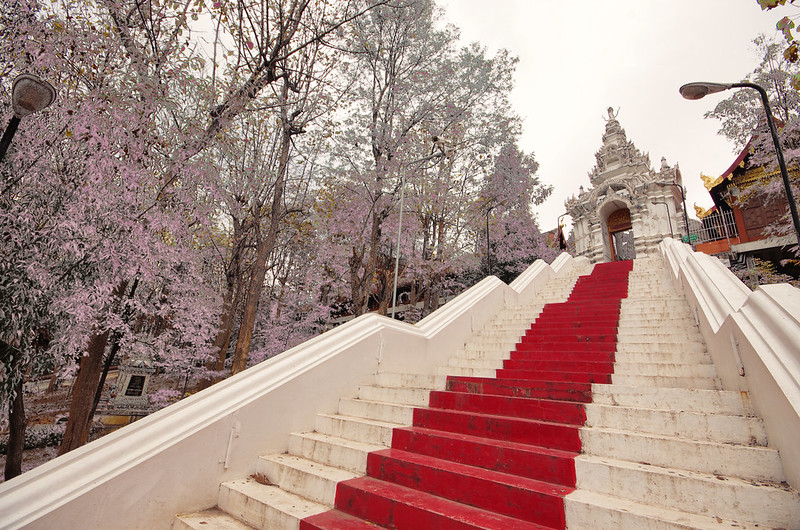 the steps leading up to wat phra that cho hae

Before calling it a day, I hired a car to take me to two places in Phrae that was not reachable by foot. These were Wat Phra That Cho Hae and Wat Phra That Suthon Mongkhon Khiri. 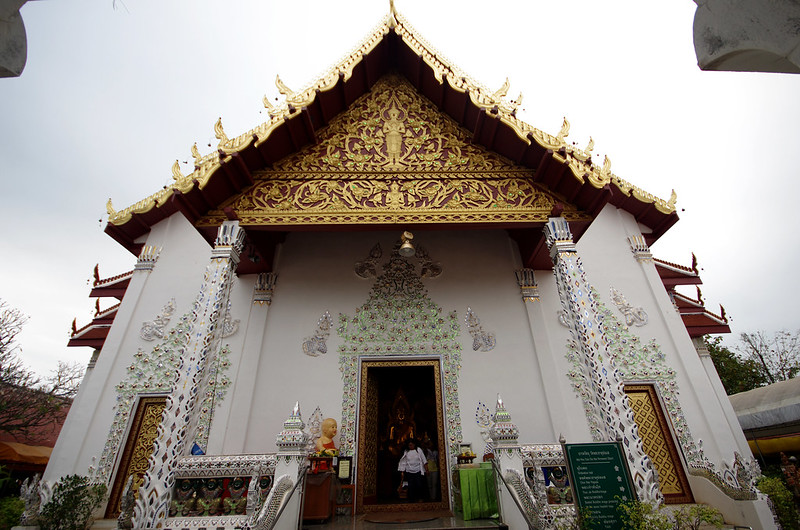 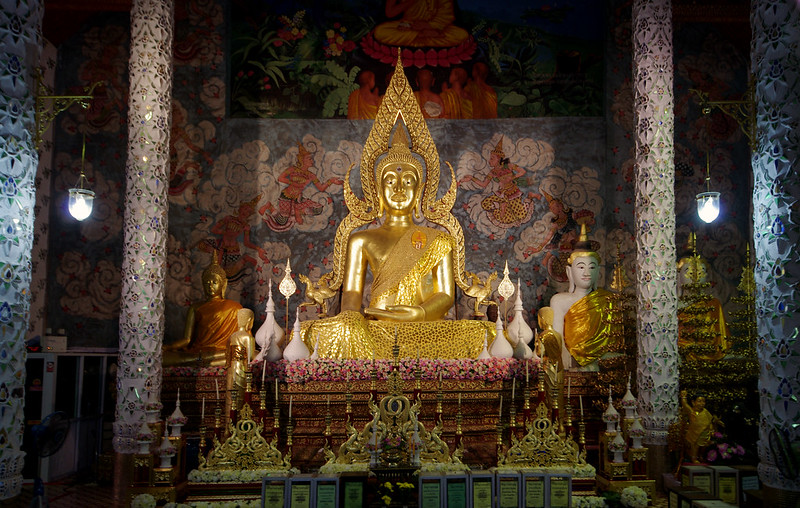 inside the wat phra that cho hae

The former’s the most famous among Phrae’s temples, and it clearly showed during my visit as it was the only one filled with people. The main stupa was being renovated when I visited but I thought the grand staircase that led to the temple on a hill was quite imposing and made the 3 kilometer trip to see this temple worth it. The Buddha image inside the prayer hall was also quite impressive, as it’s set against a wall of murals. 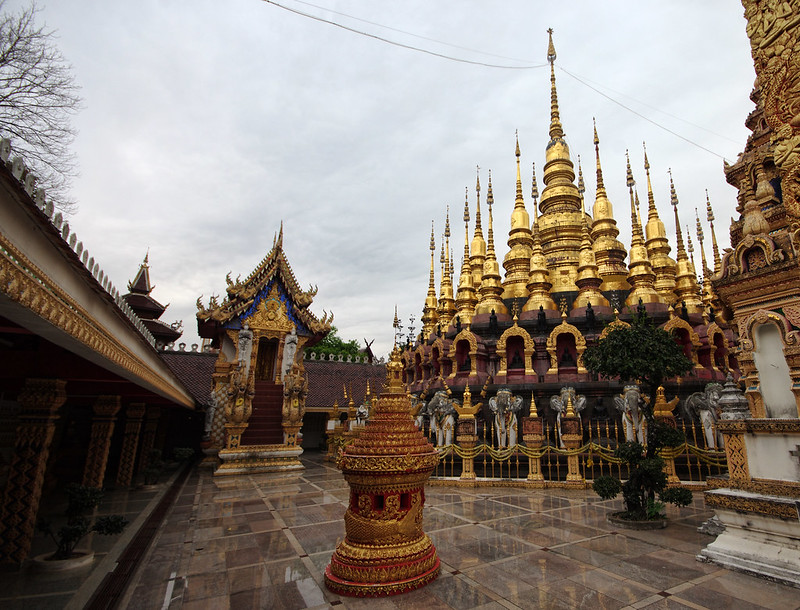 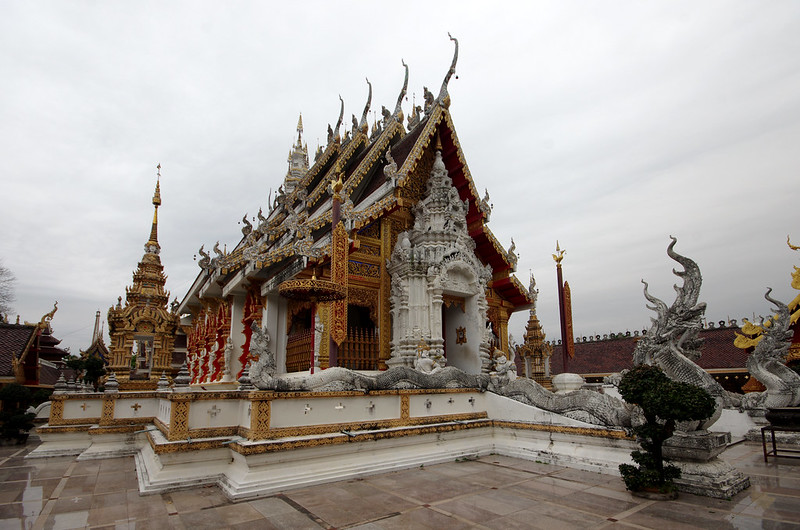 The other temple, Wat Phra That Suthon Mongkhon Khiri is not at all listed in the guidebooks but it was to me, one of the most impressive temples that I had ever seen in Thailand. It is situated 12 kilometers from town, on the highway going to Lampang. Never mind that it was dark and overcast when I visited, the stupa, consisting of several small golden towers, was a sight to behold as was the glittering main prayer hall. The temple itself is made up of several buildings and is a mixture of architectural styles.

How to Go to Phrae

I got to Phrae by bus from Nan (a 2 hour journey). Otherwise, there are domestic flights from Bangkok via Nok Air.

Where to Stay in Phrae 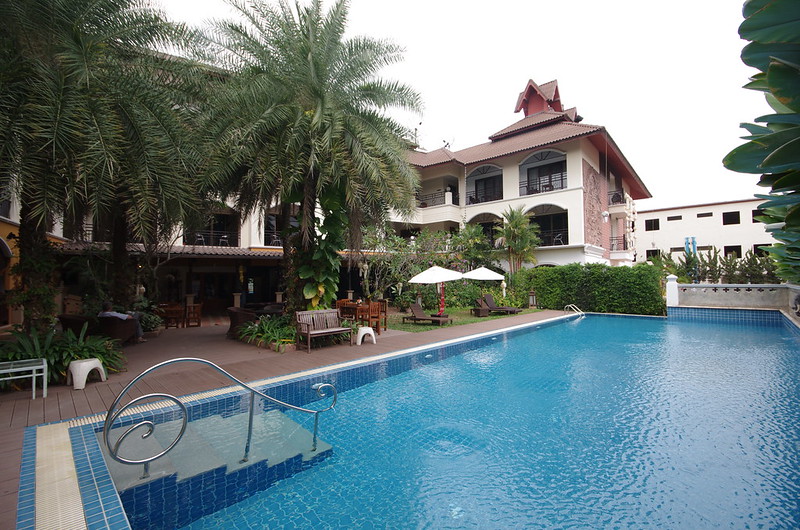 I stayed at the Phoom Thai Garden Hotel, a well-appointed option around 10 minutes walk from the walled city. They provide free transfers to/from airport or bus terminal and room rates start from 1,300 Baht per night. The hotel has a nice swimming pool and some rooms have connecting terraces. While there is no concierge per se, I found the front desk to be highly helpful and spot on in recommending places especially on places to eat and transport options. You can comparre the best prices for this hotel HERE.