The Mid-Autumn Festival in 2018 occurs on the 24th September and this year, hotels are once again showcasing some fancy flavors to top each other for the season. As early as June 2018, I am already starting to see hotels in Singapore announcing their best mooncake line-up so for everyone’s benefit, I am listing the unique flavors here for traditional mooncakes, snow skin mooncakes and even durian mooncakes as and when I receive information on them so do check this page regularly for more updates! 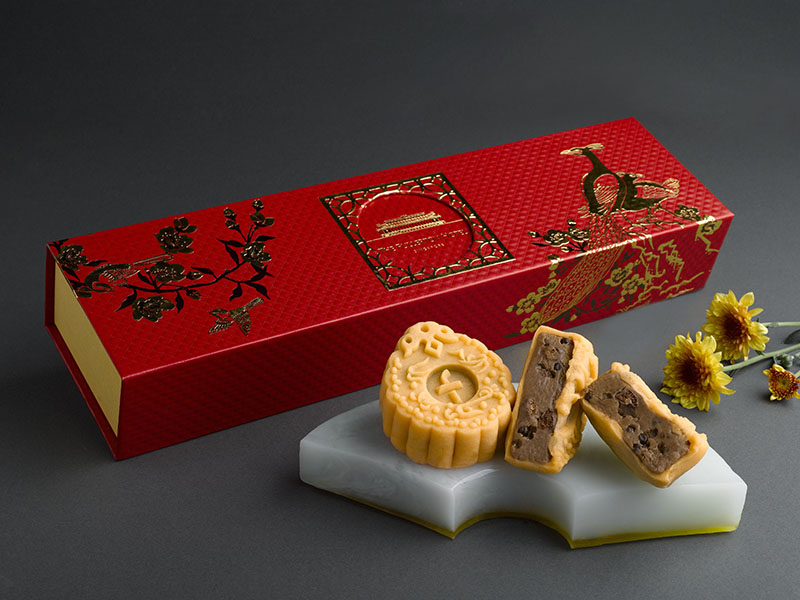 Beyond the hotel’s stately facade, The Fullerton Hotel Singapore has been consistently launching unique mooncake flavors each year and for 2018, it has the “Mile Zero” Milo Dinosaur Snowskin Mooncake which is comprised of a smooth milk lotus paste and crunchy pops of milo.

Order HERE (you will need to change delivery date to between 11th August to 24th September 2018 to access the mooncakes in the website. Alternatively, call +65 6877 8943 for orders) 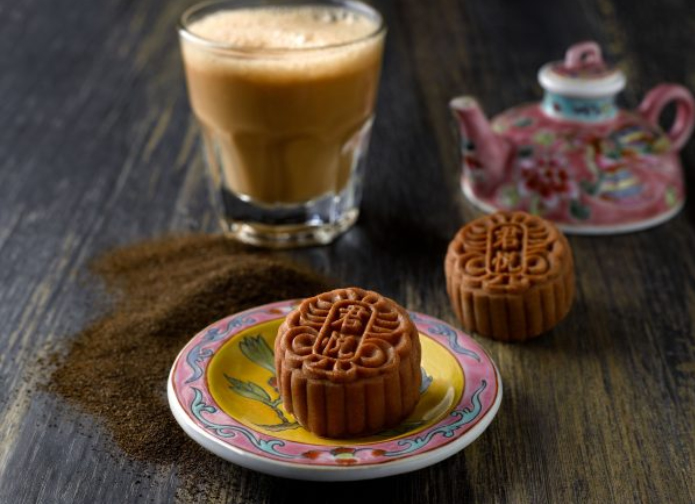 For a touch of local sensibilities, the Teh Tarik and Chocolate Truffle Snowskin Mooncake is a decadent option with its rich and creamy aroma derived from the teh tarik and enhanced with the fragrance of chocolate truffles. Other interesting flavors include Green Apple and Basil with Trigona Honey Truffle as well as Black Sesame with Walnut Truffle.

One of the most well-known hotel to roll out its mooncakes year after year, the current renovations aren’t stopping Raffles Hotel Singapore from rolling out a new flavor this year. The Acai Berry and Chia Seeds Snowskin Mooncake is definitely one-of-a-kind, taking advantage of the acai berry’s reputation as a superfood for a delicious and nutrition-packed confectionery to have during the mid-autumn festival. 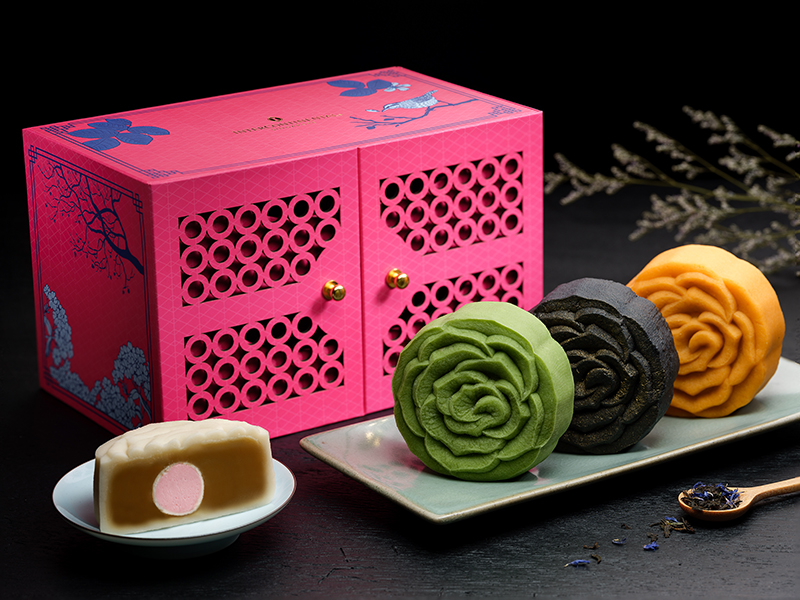 The hotel focuses on tea-themed flavors this year with a selection that drawns inspiration from tea blends at Man Fu Yuan. The new mooncake flavors include Black Sesame with Ambrosial Osmanthus and White Lotus with Mandarin Peel. These snowskin mooncakes are shaped in Man Fu Yuan’s trademark floral pattern which is the case for their snowskin mooncakes each year. Boxes come in blue or pink.

Personal Pick: Among mooncakes I’ve tried this year, I prefer these mooncakes from InterContinental Singapore (Man Fu Yuan) due to the authentic tea-infused flavors. Their boxes are also among the nicest ones this season – reusable too. 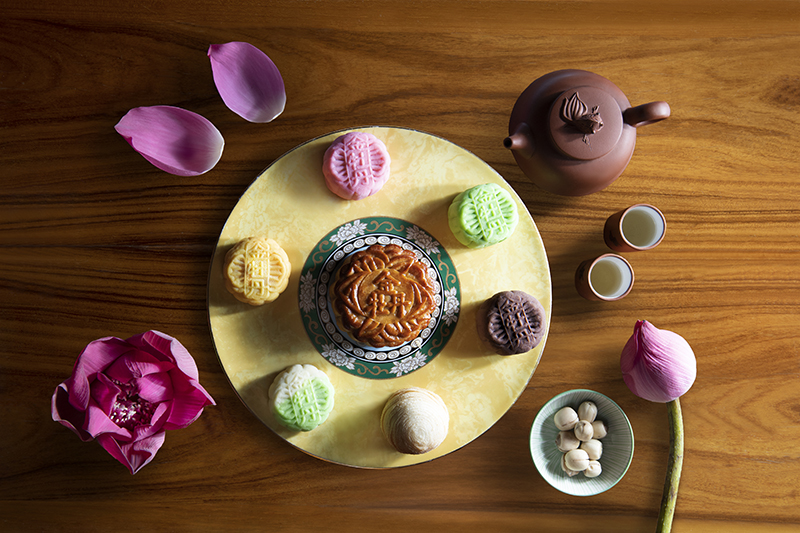 This year, the hotel is launching a couple of mooncake flavors including the Durian Snowskin. The most unique one from their side is the Ondeh Ondeh Snowskin which comes with gula melaka and fine coconut bits – a very localized flavor for a seasonal Chinese treat. 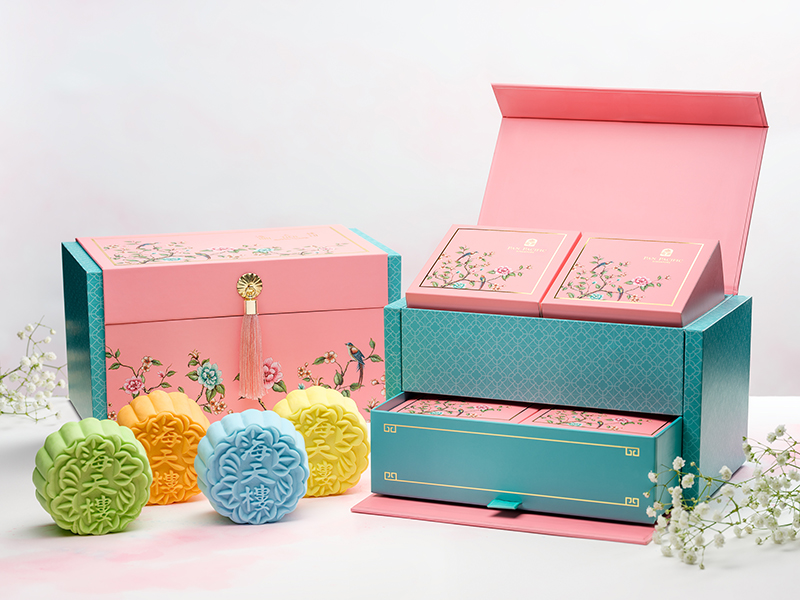 Usually the first hotel in Singapore to come up with their mooncake offerings each season, Pan Pacific Singapore this year has a tropical theme to its snowskin mooncake collection. Flavors include the Durian Mao Shan Wang, Durian Gula Melaka, Cempedak and Lychee & Soursop. 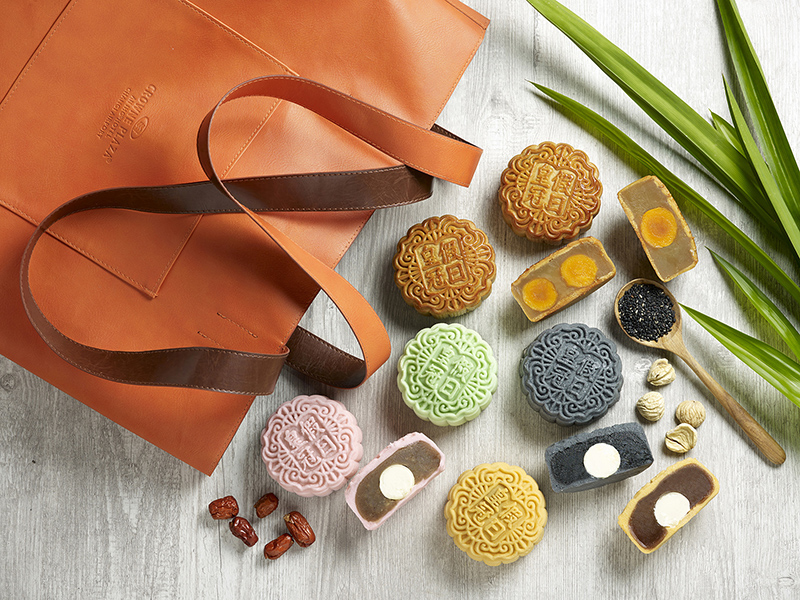 It is no secret that many people buy mooncakes in order to collect the beautiful, often handcrafted boxes. While Crowne Plaza Changi Airport has a good selection of flavors including the Black Sesame, Pandan, Chestnut and Red Date Champagne Truffle, the hotel has been known for its practical boxes. I still remember their mooncakes last year which came in mini suitcases. For 2018, every box of mooncakes purchased will come with a limited edition reversible leather tote bag. 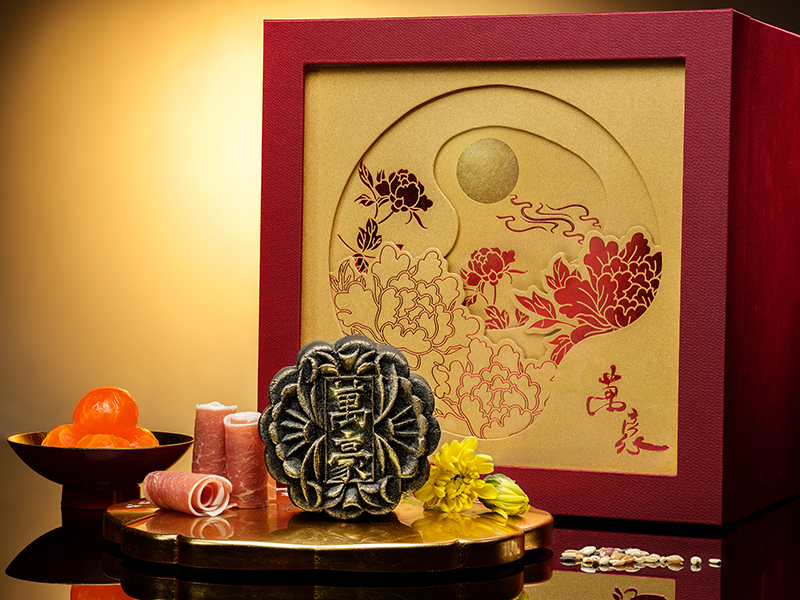 Singapore Marriott Tang Plaza Hotel usually has some of the most unique baked mooncakes each season and this year it does not disappoint. Some of this season’s highlights include the Gold-dusted White Lotus Seed Paste Baked Mooncake with Chrysanthemum, Mixed Grains, Serrano Ham and Salted Egg Yolk which can be ordered along with a limited edition box with a bottle of Amarone wine (S$238 per box). Continuing on the tradition of meat-infused mooncakes, the Chicken Bak Kwa Baked Mooncake with Assorted Nuts is another interesting concept this year. Within the snowskin variety, the hotel also has the Mango Yoghurt Snowskin with Lime Margarita Truffle, Mocha Snowskin with Milk Chocolate Royaltine and White Lotus Seed Snowskin with Salted Egg Truffle.

Order HERE (site will be available from 23rd July onwards) 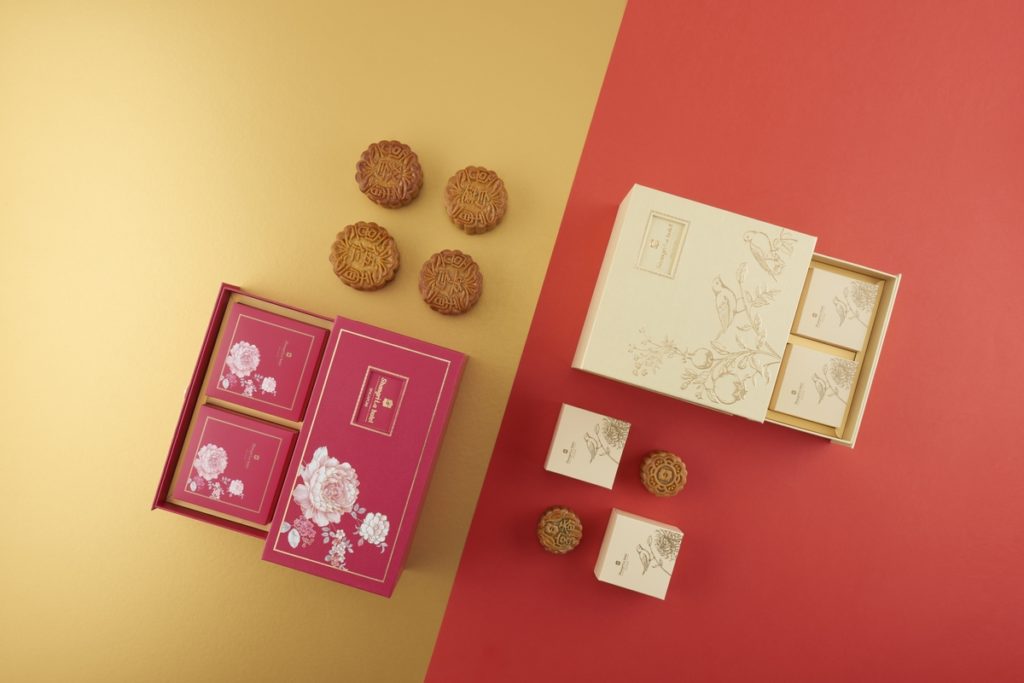 Shang Palace at Shangri-la Singapore will offer some of the most decadent flavors this season. As with last year, folks can look forward to the Mini Baked Custard with Bird’s Nest which are presented in handcrafted royal red and champagne gold boxes. Aside from this, most of the baked mooncake flavors this year come in a reduced sugar version as well, making for a more guilt-free snack this Mid-Autumn Festival.

A flavor that graces Four Seasons Singapore’s mooncake brochure each year is the beguiling Smoked Duck Mooncake which is inspired by the inhouse Chinese restaurant, Jiang Nan Chun. This year, the popular smoked duck mooncake will come with assorted nuts and lime. The baked mooncakes this year are also notable for being made with silver lotus, a variety of lotus that requires less oil and sugar to craft the mooncakes.

Durian lovers are in for a treat with the popular Xin’s Peranakan Durian Snowskin Mooncake which will reappear this season. The luxurious durian filling will be encased in a purplish blue soft skin case, naturally colored using the Blue Pea flower. The snowskin mooncakes come in two sizes, with 4 large pieces or 6 small ones in a box. 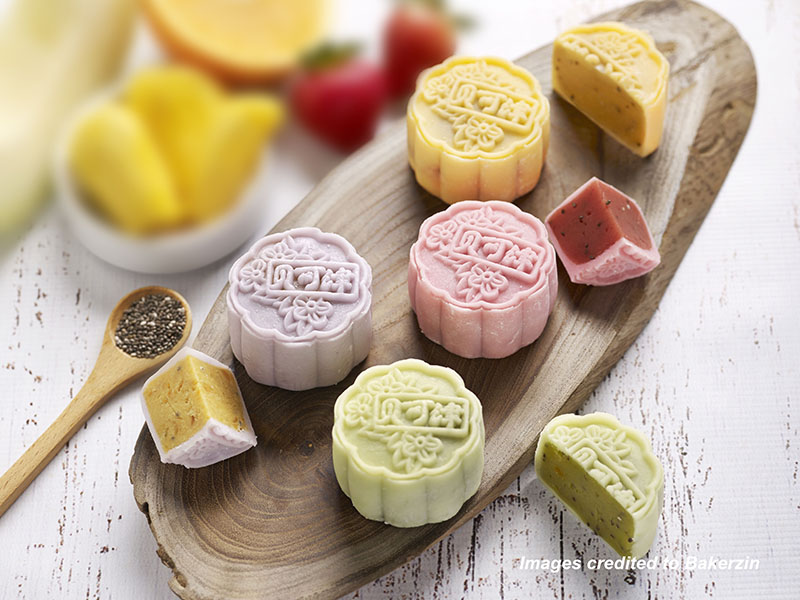 Given the focus of its business, Bakerzin has been offering one of the most reliable collections of mooncakes each year. For this season, it has one of the most number of flavors among any mooncake provider in Singapore with no less than 17 snowskin variants. Fruit flavors include Cempedak, Honeydew, Orange or Strawberry infused with chia seeds while alcohol lovers can also indulge in snowskin mooncakes with Bailey’s Irish Cream or vodka. 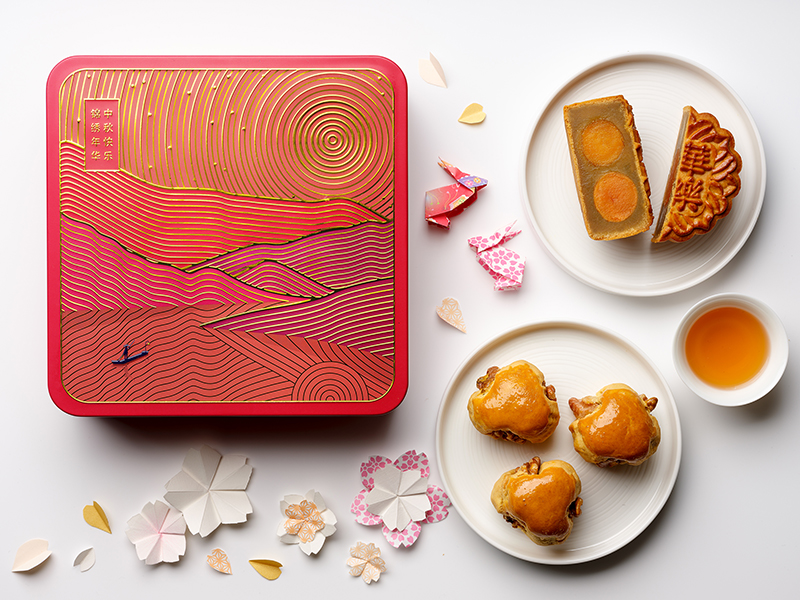 A spin-off from the popular chocolate cake from Carlton Hotel’s inhouse Tuxedo Cafe, the Mini Tuxedo Snowskin are among the hotel’s highlights this year with its rich Valrhona chocolate sponge cake filling and crunchy chocolate balls. A perennial best-seller is the Mini Walnut Moontarts which will again make an appearance this year. 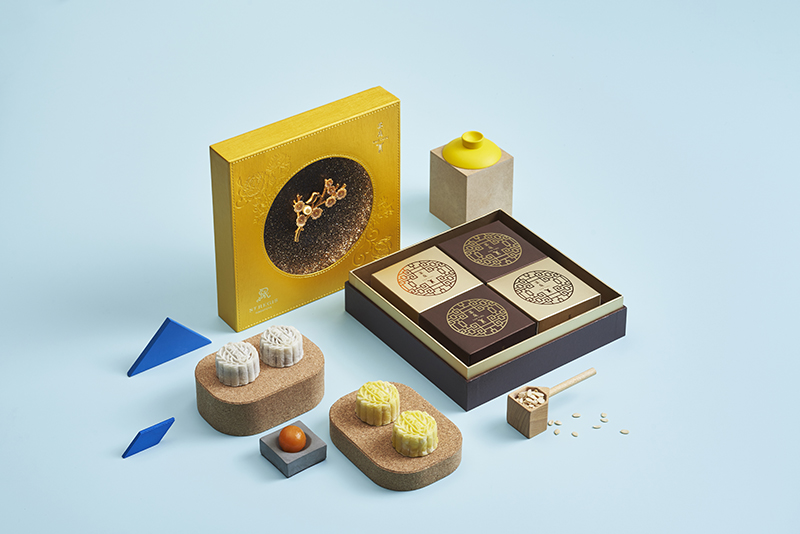 There is a special tone to this year’s mooncake offerings by St. Regis Singapore as the hotel has collaborated with San Francisco-based Michelin-starred pastry chef, Melissa Chou for its flavors. These include the Black Sesame Paste with Salted Peanut Truffle Snowskin and the Jasmine Tea Paste with Salted Egg Yolk and Melon Seeds Snowskin. For durian lovers, St. Regis Singapore also has the Pure Mao Shan Wang Durian Snowskin which contains nothing but premium-grade durian chunks inside. 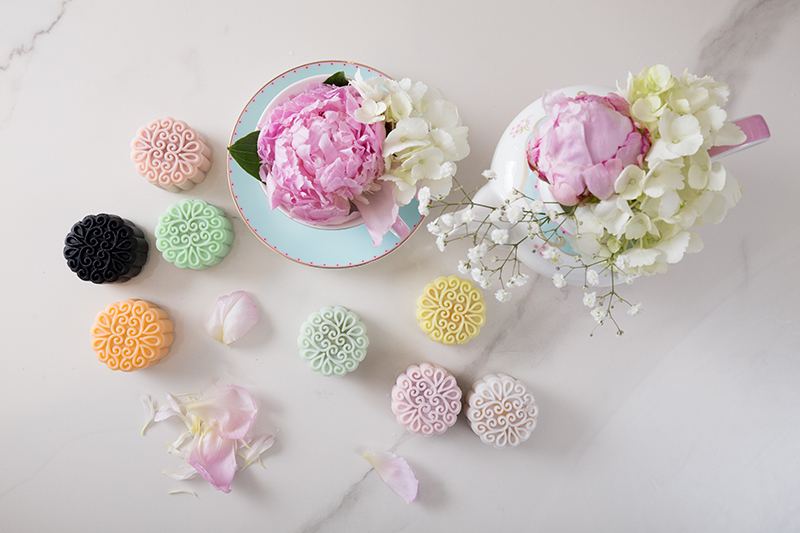 For the first time, The Marmalade Pantry is launching an exclusive collection of snowskin mooncakes. Available in both alcoholic and non-alcoholic variants, flavors include Strawberry Rose, Yuzu with White Chocolate and Honeydew with Dark Chocolate. The alcoholic versions will include the likes of sake, vodka, dry gin and whiskey inside. 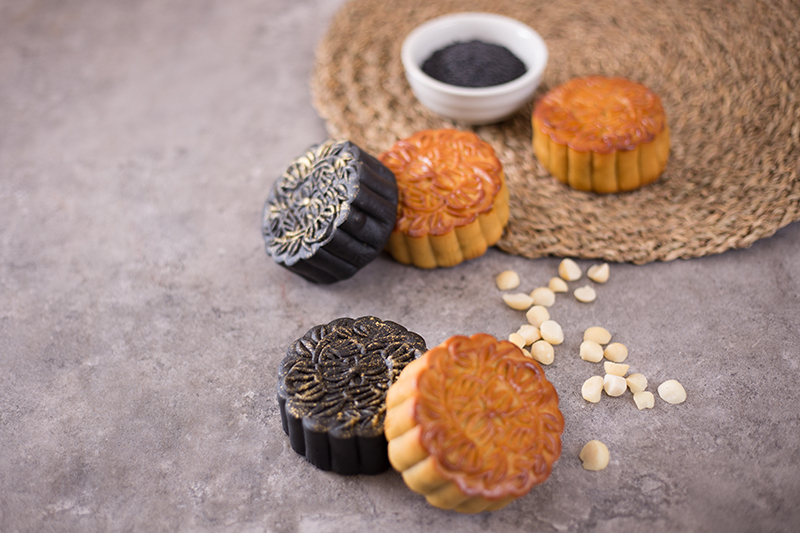 Out with a selection of baked mooncakes this year, Dean & Deluca has the likes of the low-sugar Pandan Paste Mooncake with Single Egg Yolk and a Charcoal-baked Black Sesame Mooncake with Melon Seeds among its flavors. 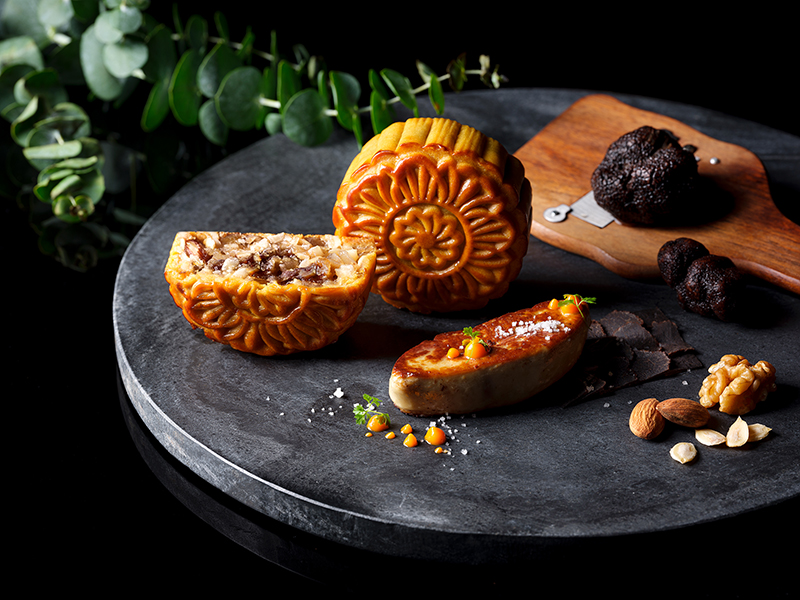 Marking its mooncake debut, the new hotel is infusing French and Chinese sensibilities into its mooncake collection this year. One of the most unique flavors to come out among all mooncake providers this year is this hotel’s “The Luxe” which is comprised of foie gras and truffle oil. For more traditional tastes, there’s also The Oriental with green tea paste and melon seeds or The Traditional with lotus paste. 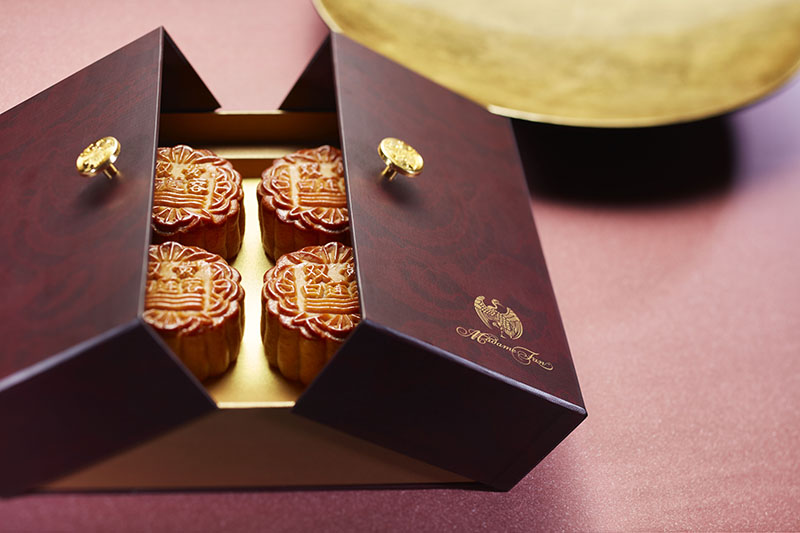 The hotel, thru its Chinese restaurant, Madame Fan; is making its mooncake debut this year with a promising collection of traditional and snowskin mooncakes. Aside from the usual lotus paste variant that everyone else is offering, Madame Fan will have a Pu’er Mooncake to pique the interest of tea lovers. Among snowskin mooncakes, there will be flavors like Cempedak, Creamy Durian Paste and Matcha Paste. Perhaps the best thing about their mooncake collection this year is the elegant crimson red latticed box (pictured above) that can go well as a fine jewelry box.