Measuring just 316 square kilometers, Malta punches way above its weight in terms of attractions and activities. As a year-round destination, this tiny island nation in the Mediterranean certainly surprised me when I visited. Coming from Singapore, a city state which is actually more than twice the size of Malta, I was taken aback by the abundance of open spaces, distinct villages as well as the number of natural attractions. Malta certainly seems much larger than its actual size suggests.

When I visited Malta, I allotted only 3 days to explore the the two main islands of Malta and Gozo (three if you also count Comino) Knowing the size of the country beforehand, I thought 3 days would actually enable me to fully explore the islands plus allow for a lot of free time. After my first day, it dawned on me just how much there is to see and do that I felt the need to plan the remainder of my trip carefully. Eventually, I was able to cover the interesting points in the islands within 3 days, including some Game of Thrones filming locations, and here I will share with you just how to do the same. If you are in Malta for an extended weekend, this is an itinerary that you can follow. 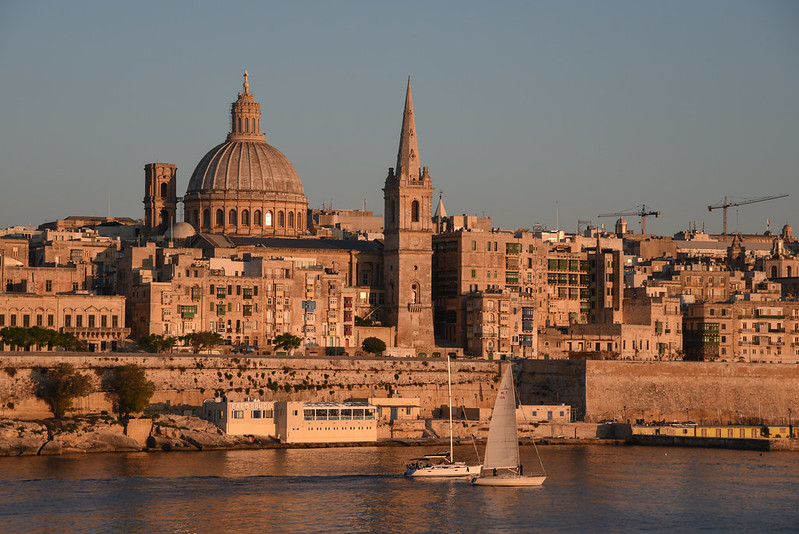 Arrival. The Malta International Airport is located in the southeastern part of the country, near the town of Luqa. The main areas where tourists stay in, namely the capital, Valletta and the harbor town of St. Julian’s, are around 9 to 12 kilometers away. This is a relatively short distance but do note that roads in Malta are relatively narrow. If you opt to take the public bus (Bus #X4 drops you off at the gate at Valletta or #X2 to St. Julian’s), do note that it can sometimes take more than hour to make that 9km journey. Alternatively, you can take the official airport shuttle.

Drop your bags at the hotel and start your sightseeing in Valletta. Sitting prettily on a hilly peninsula that juts out from the main island, the lilliputian capital of Malta is easily walkable. If you are taking the public bus, chances are you’ll be dropped off just outside the city gates. This is the perfect spot to start your tour of Valletta. 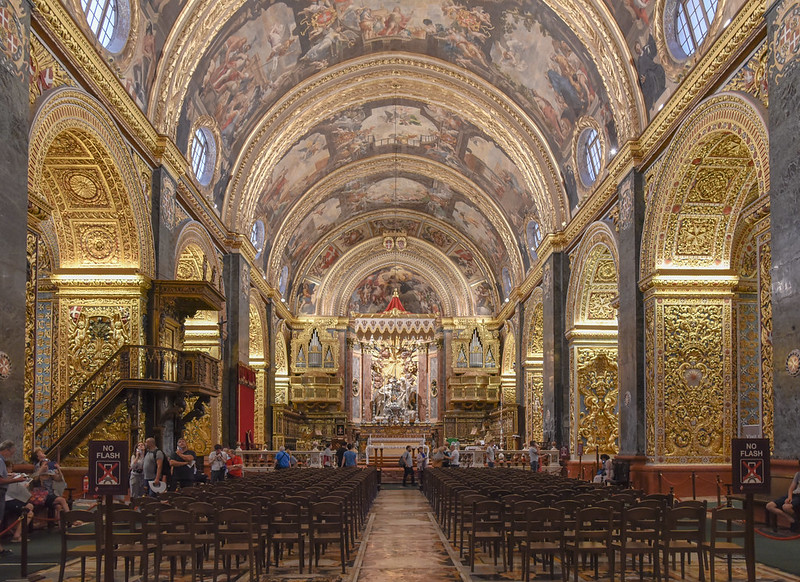 inside st. john’s co-cathedral in valletta

Orient yourself by walking down Triq-il-Repubblika, Valletta’s equivalent of the main street. Many attractions are also situated here, such as the impressive St. John’s Co-Cathedral and the Palace of the Grand Masters. You can budget around 1.5 to 2 hours in total exploring these two attractions before heading to the beautiful Manoel Theater. You can access it by watching a performance there or you can check their website HERE for tour schedules. 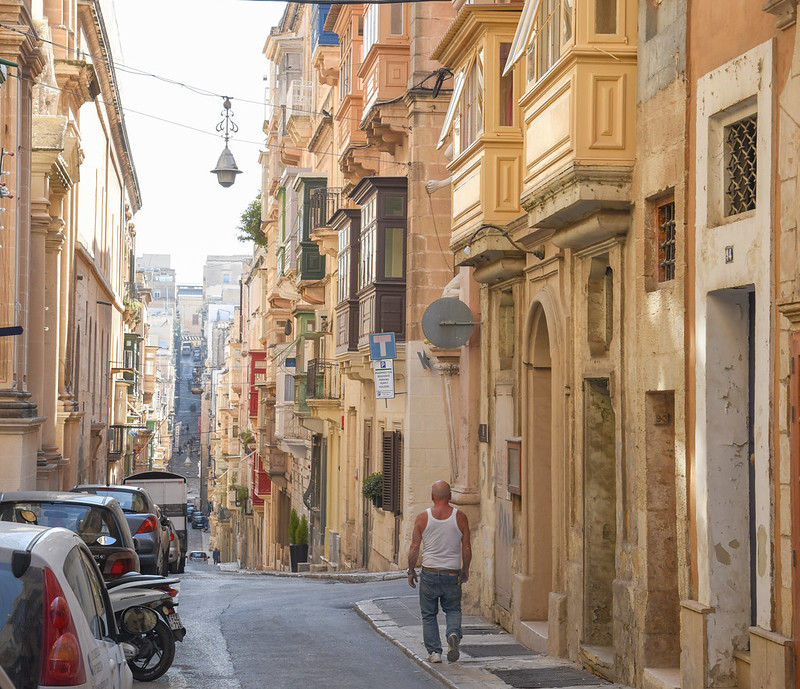 walking down the narrow streets of valletta

For a glimpse of Valletta’s impossibly picturesque street scene, I recommend walking down the relatively steep and less touristy Triq San Pawl and St. Ursula Street. Finish off your exploration of Valletta at the Upper Barrakka Gardens where you can have majestic views of the Grand Harbour as well as two of the “Three Cities” – Vittoriosa and Senglea. You’ll get to really appreciate the laidback Mediterranean vibe of the city while enjoying this panoramic view. Perhaps it is no surprise that Valletta ranks as one of the popular retirement places in Europe.

Devote an entire day exploring the other islands of Gozo and Comino which can be combined together in a single journey if you make it to the right boats. Do note that these islands tend to get busier during the weekends so if your trip cuts across Saturday and Sunday, try to head to these islands during another day (even Friday is better) for less crowds. 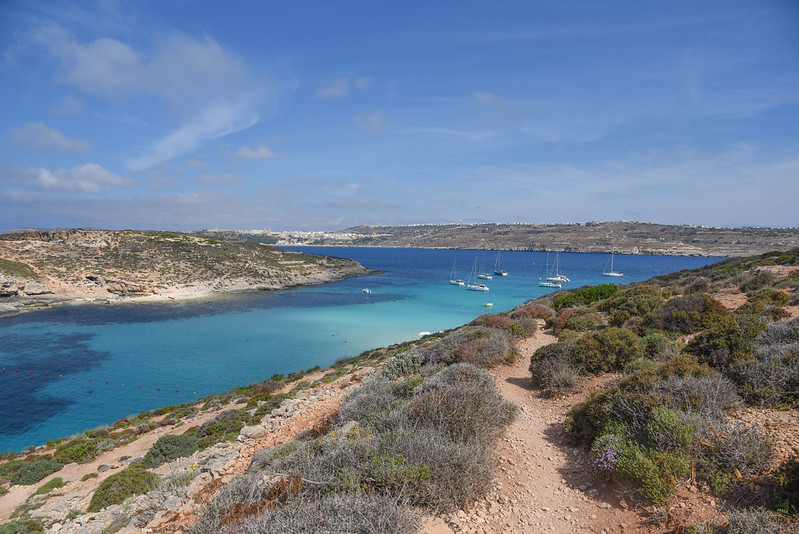 the blue lagoon in comino

The logical starting point for any trip to Gozo and Comino is at Cirkewwa, at the northern tip of the island of Malta. I took Comino Ferries as they have departures from Cirkewwa to Comino and they also have trips originating from Comino to Gozo. This allowed me to go to the two islands without having to go back to the main island of Malta each time. Note: Owing to the current situation, frequencies have been reduced so it’s best to check the website for the latest schedules. 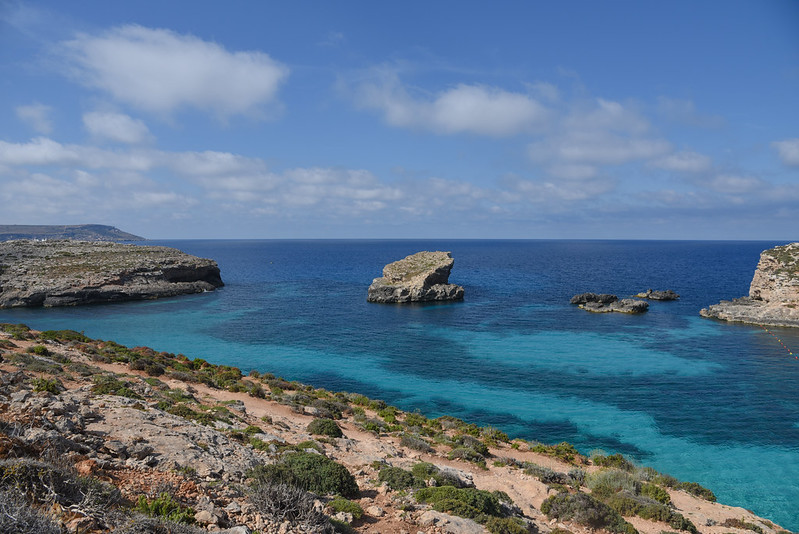 another view from comino

Take the first boat out (9AM departure) to Comino and spend a couple of hours there before taking the other boat to Gozo. Comino is a relatively barren island that is famous for the Blue Lagoon (well worth the trip!). You can either sunbathe and swim in the lagoon or walk around the relatively flat island. I spent around 1 to 2 hours in Comino before heading to Gozo. 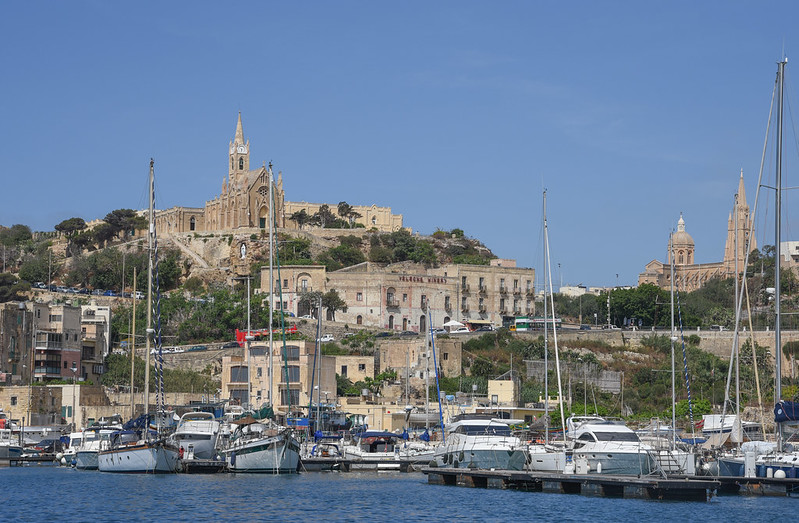 The drop-off point in Gozo is at the town of Mgarr which is picturesque in itself. Upon arriving in the island, the first thing you’ll probably notice is how less dense it is compared to the main island of Malta. Gozo takes up around 22% of the country’s area but less than 10% the population. Getting around the island is pretty simple. You can either take the public bus or join one of the bus tours or hire your own taxi to take you around the island for a day tour. If you want to see as much as possible in your own pace but don’t have a car, I recommend joining a tour.

The tour can take you to the highlights of Gozo which includes the following: 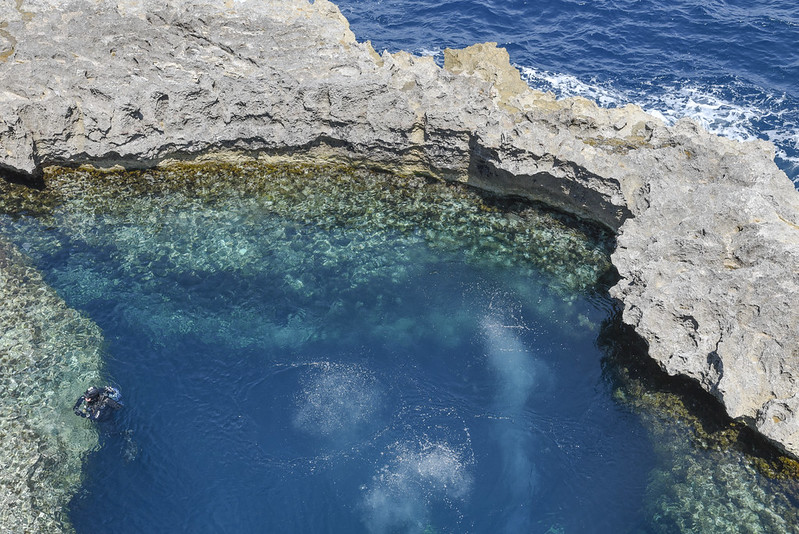 The Azure Window and Blue Hole in Dwejra are two of the most iconic sights in all of Malta. Sadly, the Azure Window has disappeared but the place is still worth a trip for the unbelievable color of the Blue Hole. It is also a short walking distance from here to the Inland Sea where you can hire boatmen to take you around the underground cavern. 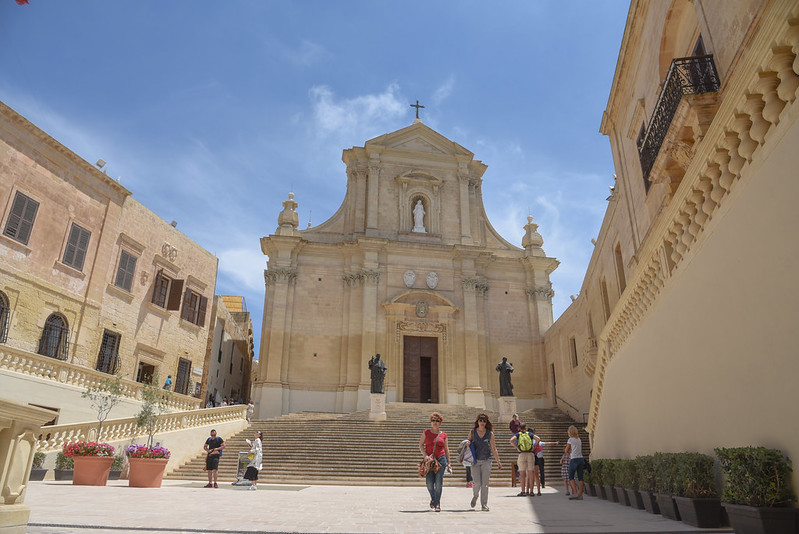 the citadella in victoria

The Gozitan capital of Victoria (Rabat) is also a must-see for its hilltop Citadella. It’s worth a walk for the impressive views of Gozo. Here, you can also see the Victoria Cathedral, the Museum of Archeology and the Old Prison.

Marsalforn – Situated along a small bay, the tourist town of Marsalforn is worthwhile for a quick lunch stop. The beach though not spectacular, seems to be popular with tourists. 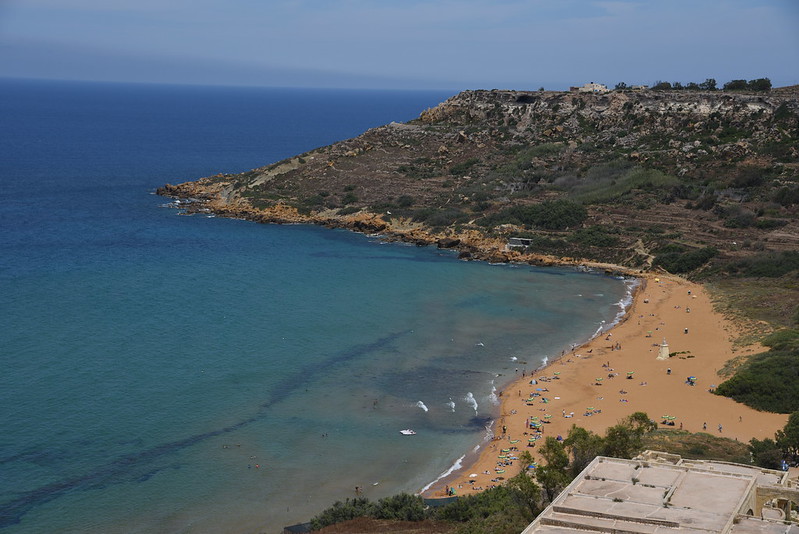 Calypso Cave – You can still enter this attraction although the actual cave is closed. Nowadays, people come here to get a bird’s eye view of Ramla Beach. 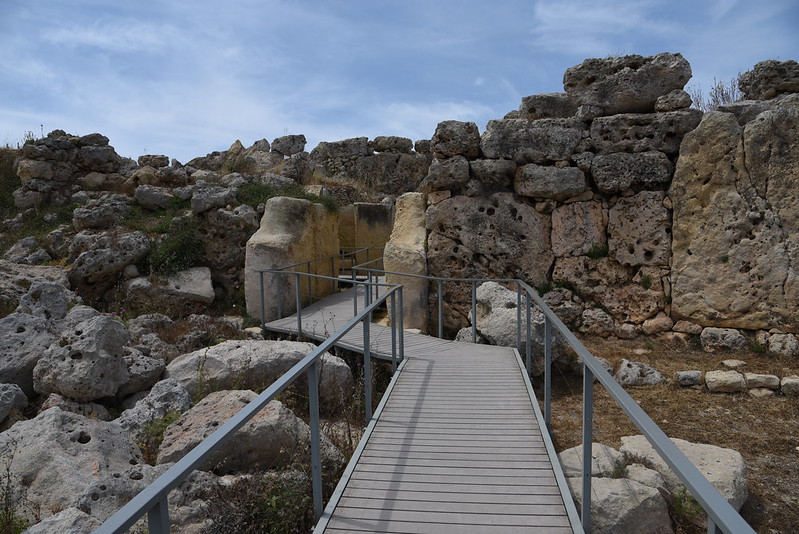 Ggantija Temples – a UNESCO World Heritage Site, Ggantija is the earliest of Malta’s Megalithic temples. The structures date back to more than 5,000 years. Opening hours: 9am to 16:30PM, Admission: EUR 10 for adults

After you’ve had your fill of Gozo, head back to Mgarr and catch the ferry back to Malta. 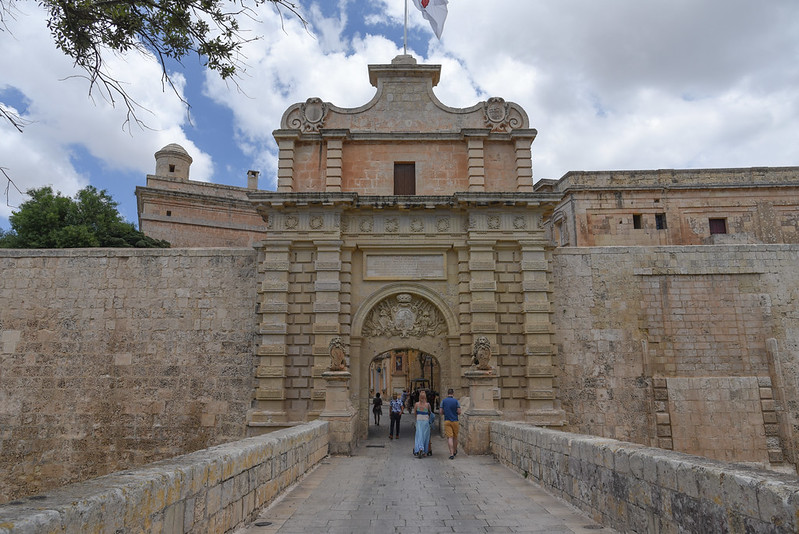 My personal favorite place in Malta is the walled city of Mdina. Don’t skip this town even though it’s relatively out of the way. I boarded the #202 direct bus from St. Julian’s which took a little over an hour to get there (it’s about 30 minutes by cab from Valletta or St. Julian’s). If you are coming from Valletta, you can take buses #51, 52 or 53. 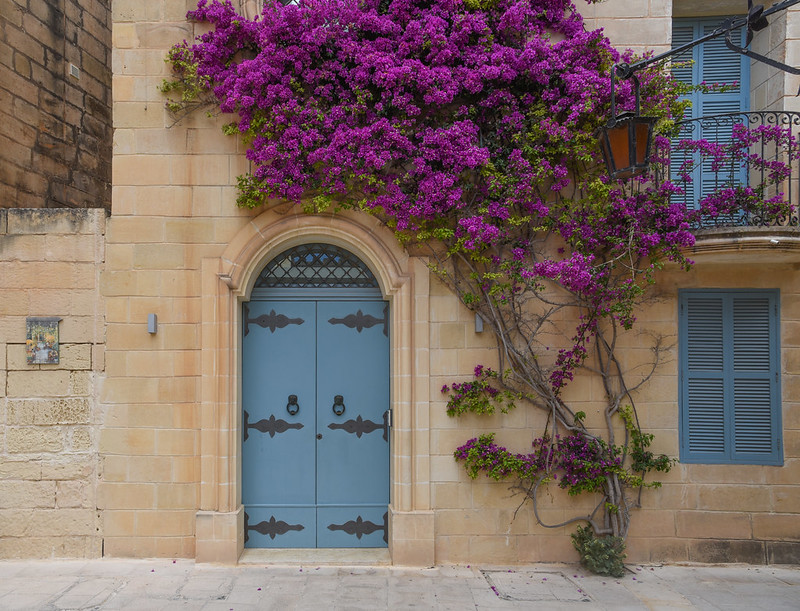 For fans of the TV show Game of Thrones, the walled city of Mdina was actually used for the fictional “King’s Landing” in the first season. Walking around the quiet alleys away from the main street transports one back to the medieval ages when Mdina used to be the capital of Malta. No cars are allowed within the walled city of Mdina which is also known as the “silent city.”  For a guided Game of Thrones tour around Malta, you can check here.

Tip: Mdina can get a bit overwhelming with tourists especially at midday. To get around this, consider visiting early in the morning or stay overnight. Most visitors are there for only a few hours anyway and you’ll find entire alleys all to yourself late in the afternoon.

The town of Mdina is now part of a larger town called Rabat (not to be confused with Victoria in Gozo which is also called Rabat). Rabat is also worth the short stroll from the walled city. The St. Paul’s Church is apparently the place where St. Paul lived in Malta after he was shipwrecked. Another notable Game of Thrones filming location, the St. Dominic’s Convent, is also located in Rabat. 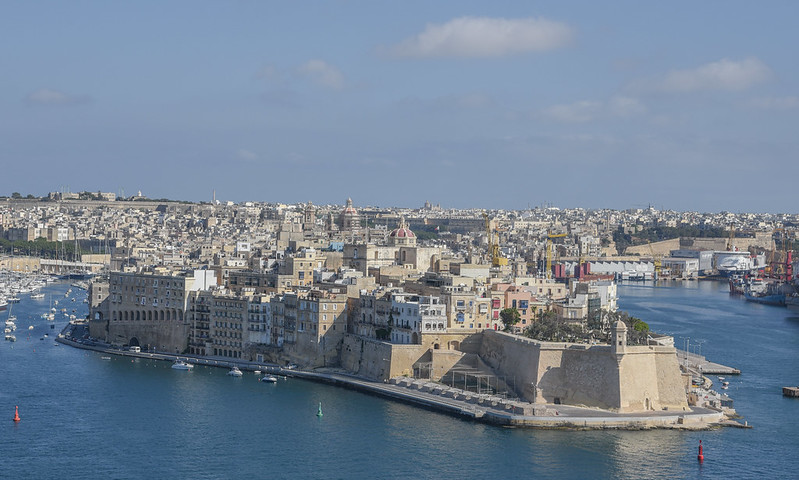 view of the three cities

If you still have time after this, head to the three cities of Vittoriosa, Senglea and Cospicua. Although not short on sights, these “three cities” are bit like Valletta with the narrow and hilly streets, picturesque windows as well as fine views over the harbor. The St. Michael’s Bastion is worth a look while the views from the Gardjola Gardens (both places are in Senglea) are worth a look.

Alternatively, if you are flying out that day, you can consider heading to the seaside town of Marsaxlokk to check out the St. Peter’s Pool (a beach/lagoon) and have a late seafood lunch near the fishing village before heading to the airport.

Where to Stay in Malta 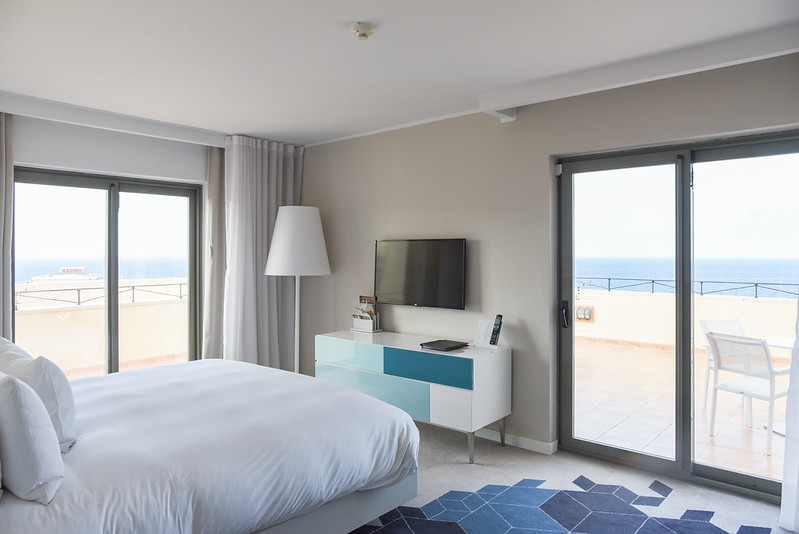 my room in hilton malta

My favorite place to stay in Malta is the newly-refurbished Hilton Malta located by the bay in St. Julian’s. Rooms are decked in cooling white. Highly convenient, bus stops that lead to several points in the island such as Mdina and the capital, Valletta, are only a block away from the property. You can also check out other Malta hotels here