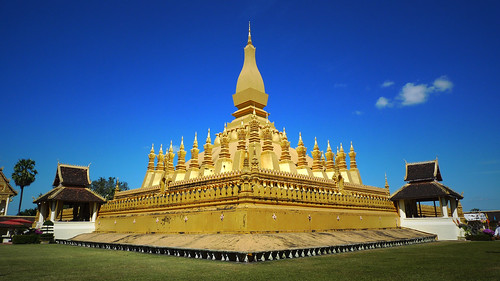 basking in the golden sunlight – Pha That Luang

Ahead of my November visit, I was told by all the guidebooks to expect a very sleepy town in Vientiane considering that it is the capital of a country with fewer people than Singapore but 300 times the size. The first encounter I had with the city was on arrival after an annoying flight delay due to rain in KL, during the night before our bumpy trip to Luangprabang. I did not really expect much in terms of fun things to do in the capital.

Vientiane is a town in many sense of the word. It is compact, no tall buildings and still quite provincial. But by no means was it sleepy… or did I miss anything? 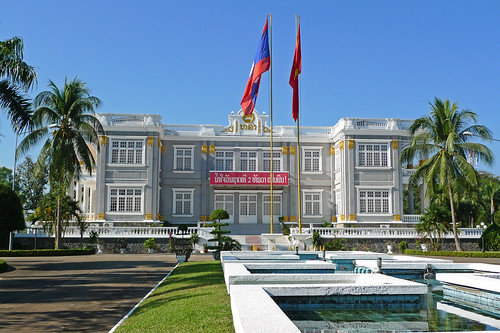 The place was international enough for my taste. There were plenty of excellent French restaurants, and during our first night in Laos, we got to try some. It was sumptuous – from our humble salad to the delectable apple tart. I wouldn’t be surprised if Laos has the cheapest gourmet French food in Asia.

Vientiane was also surprisingly wired, though not in the literal sense of the word. There was wifi connection in most places – including most cafes, restaurants, hotels – even the food courts in the shopping centers! The best thing about it was that it’s free. Maybe Suvarnabhumi Airport can learn a thing or two from its humble neighbor up north.

Last but not the least – as a tourist, a town would not be worth visiting if it were not for its attractions. I must say, though most guidebooks favor Luangprabang heavily over Vientiane, I am slightly tipped for the latter as there are just more things to do. 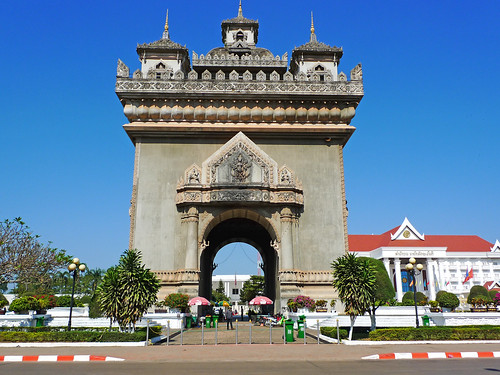 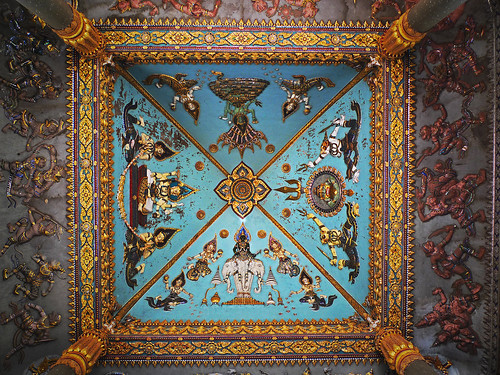 ceiling of the patuxai

The Patuxai is often regarded as a kitschy remake of the well-known Arc de Triomphe in Paris, and it is quite clear to see why… but only when you’re standing within 5 meters of this cemented creation.  From far away, it does appear commanding, and looks even better at night when it is all lighted up. Those desiring a better view of Vientiane can climb to the top for a nominal fee to enjoy a good view of the mainly low-lying cityscape. 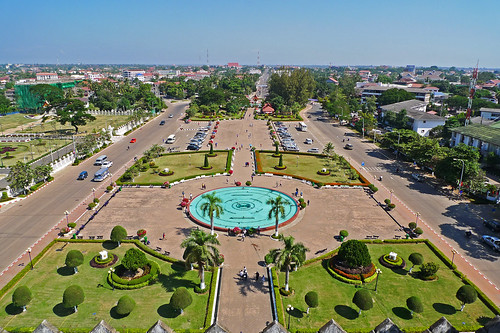 the view from Patuxai

Vientiane is also home to the Pha That Luang which is regarded as the national symbol of Laos. We visited during the sweltering heat of midday when the sun was shining directly down on the golden stupa. 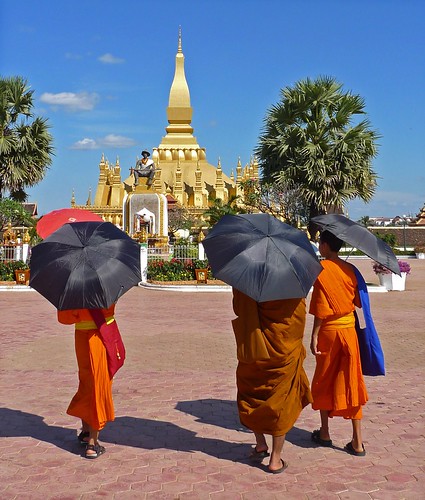 Vientiane is also home to a number of temples. There were already 3 temples within a 250 meter radius from our hotel alone! But the best showcase of traditional Lao design would be Wat Si Saket and Haw Phra Khew where the original emerald buddha in Bangkok was supposed to have come from. 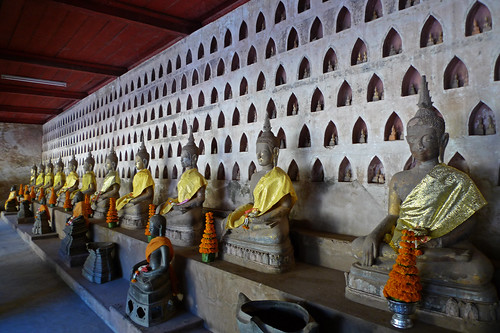 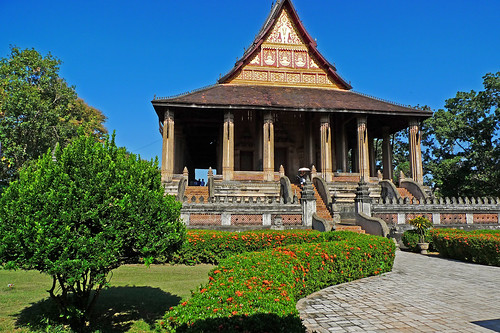 Haw Phra Kew – the original home of the “emerald buddha”

We managed to cover all the city sites by midday. For the rest of the day, we decided to go to Buddha Park which is outside the city. To get there, we hired a van from the Talat Sao bus station. It was extremely hot by this time and we didn’t want to take a tuktuk. Since there were 4 of us, we managed to get a good deal for a van, which was a good thing too considering that the Buddha Park was almost an hour away. We passed by some notable buildings along the way, including the Lao Stock Exchange which had yet to open when we passed by. The Lao equities market is as frontier as frontier markets go — it has only 2 listed stocks! But I digress. 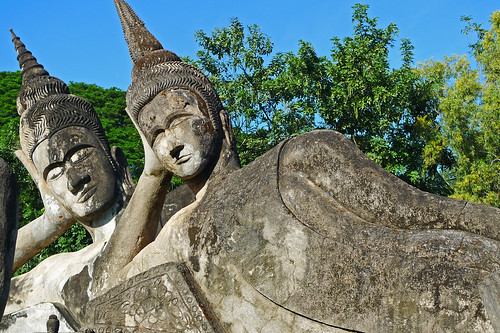 We finally arrived at the gaudy-looking Buddha Park. Honestly, I thought it would be much larger. But in reality, it’s more like a garden/park filled with Buddha statues of various shapes and sizes.  There were many bizarre representations of the Buddha, but I found the reclining Buddha to be quite imposing.

We ended the day back in Vientiane, on a park right by the Mekong. As it was a cloudless day, the sunset was nothing short of spectacular. Have a look below and see if you agree with me. 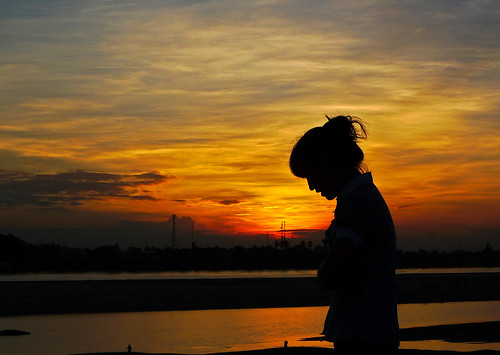 We stayed at Sinnakhone Hotel. We got upgraded into a triple room and paid only USD 21 per night! A steal! The room rate also comes with free breakfast. 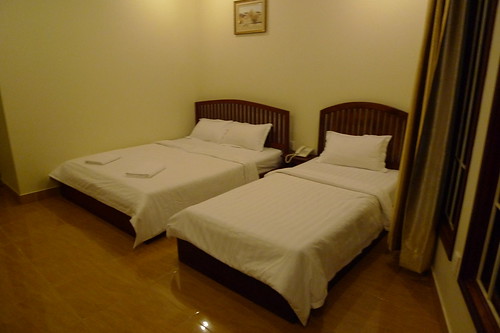 the triple room in Sinnakhone Hotel

How to go to Vientiane: Owing to its small population, there are few air connections between Vientiane and other destinations. Most common air link is to Bangkok where Thai Airways and Lao Airlines have direct flights. A bit farther away, AirAsia’s Kuala Lumpur link is the only budget airline connection to Laos. For land journeys, your best bet is to take an overnight sleeper train from Bangkok to Vientiane.

Getting around: Vientiane is fairly compact and walkable. Most of the major sites are within walking distance of each other. The only exceptions are Pha That Luang which requires a short tuktuk ride (short hops for about US$1 per person) and Buddha Park which is outside of Vientiane, near the border crossing with Thailand.