Crowne Plaza Changi Airport recently unveiled a new 243-room extension to complement its current structure, bringing the total room number to 563. It has been two years since my last stay at Crowne Plaza Changi Airport (to read my review of the main wing, click here) and I remember my first experience there to be wonderful – among the twelve best staycations I’ve had in Singapore. I totally loved the resort vibe, spacious rooms and soundproofing done on the property. Recently, I was invited by the hotel to return for a staycation to have a look at the new rooms. 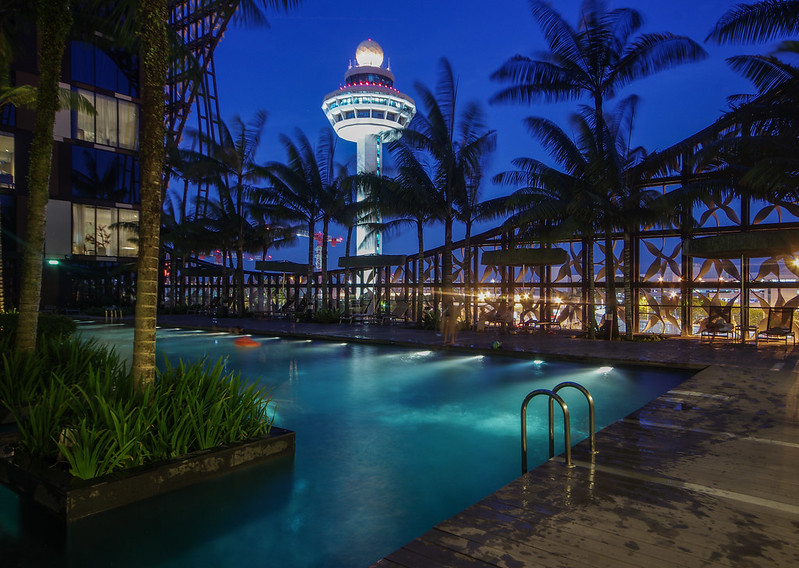 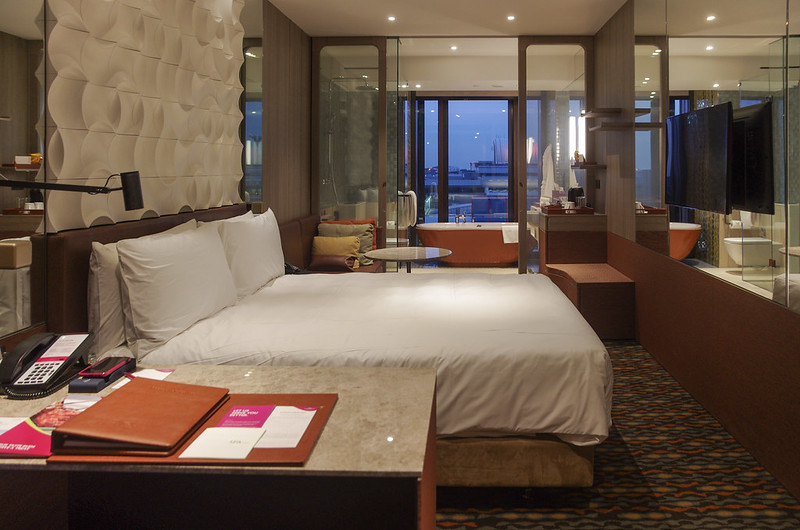 Entering my Business King room for the first time, I was immediately struck by the standalone tub located by the window (but more on that later). The room setup in the new wing is highly rectangular which is in contrast to the square-ish layout in the older wing. The layout for the Business King is also slightly different from the usual one I encounter in hotels. The bathroom is located at the far end of the room rather than somewhere near the entrance. As such, the natural light source also comes from the bathroom as that’s where the windows are. That being said, the bedroom area still gets a lot of light due to the see-thru panels separating it from the bathroom. 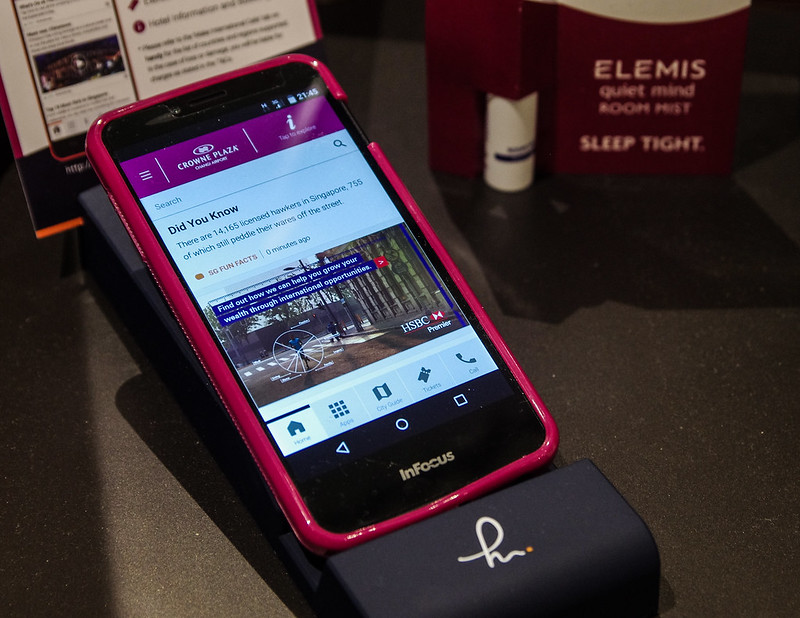 The difference between the main wing and the new wing became clear as I surveyed the rest of my room. One could now think of Crowne Plaza Changi Airport as a serious business hotel. The number of power outlets, USB charging ports and complimentary usage of a mobile phone were glaring manifestations of this new positioning. The writing desk – perhaps the single most important piece of furniture for business travelers – is thankfully wide and together with the Herman Miller swivel chair, make working a tad easier to the physique. 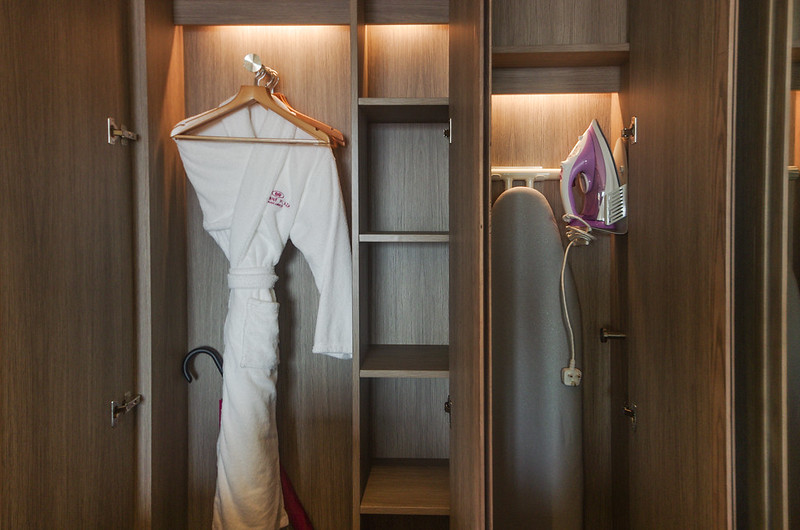 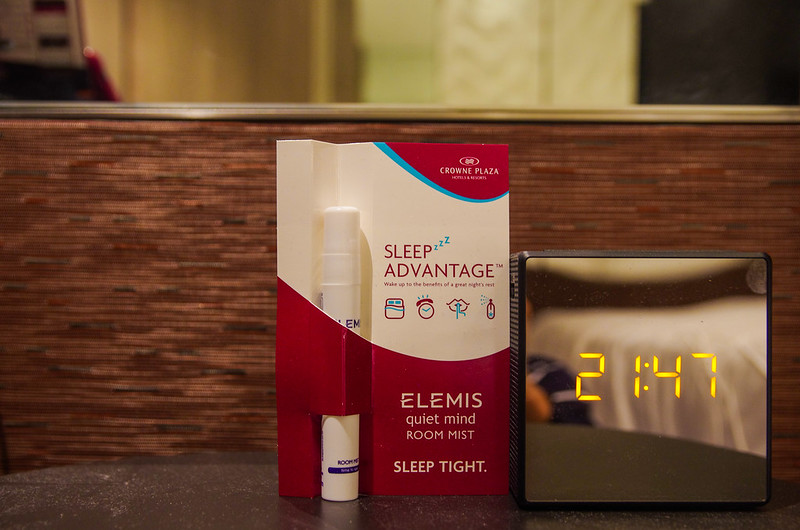 Rooms at the new wing get to have a complimentary “Sleep Advantage” kit to help promote a restful stay. Other than the ergonomically designed bed, a standard inclusion with every stay here is a sleep spray from Elemis. 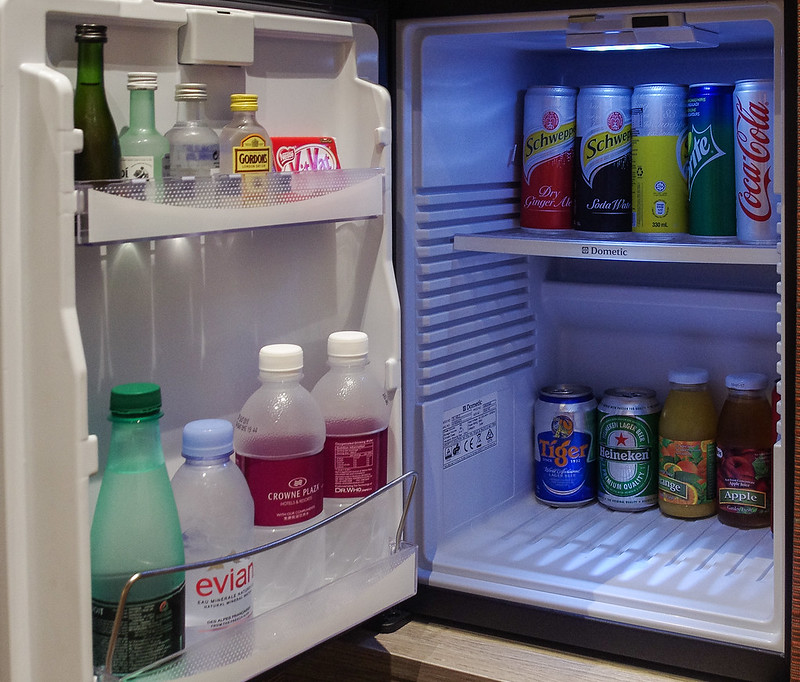 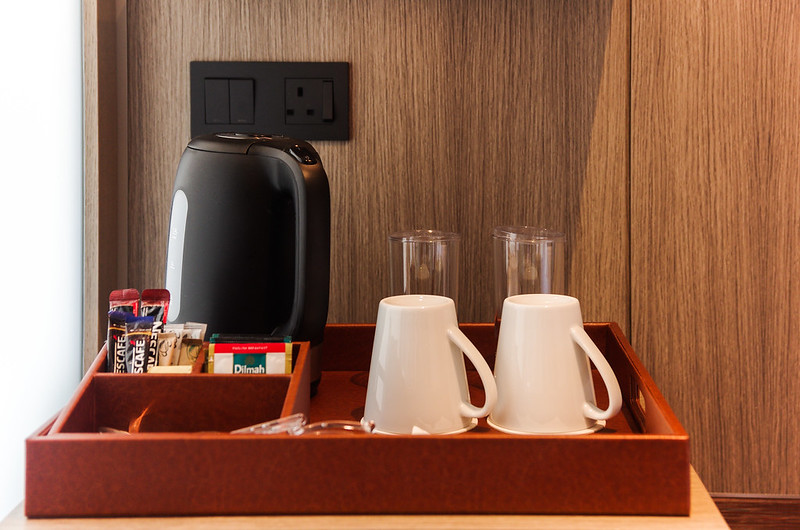 The hotel itself is just a short walk from Changi Airport and it’s quite convenient to head down there for any late night hunger pangs. If you’re too sleepy to head down, the room comes with a decent drinks-centric minibar. 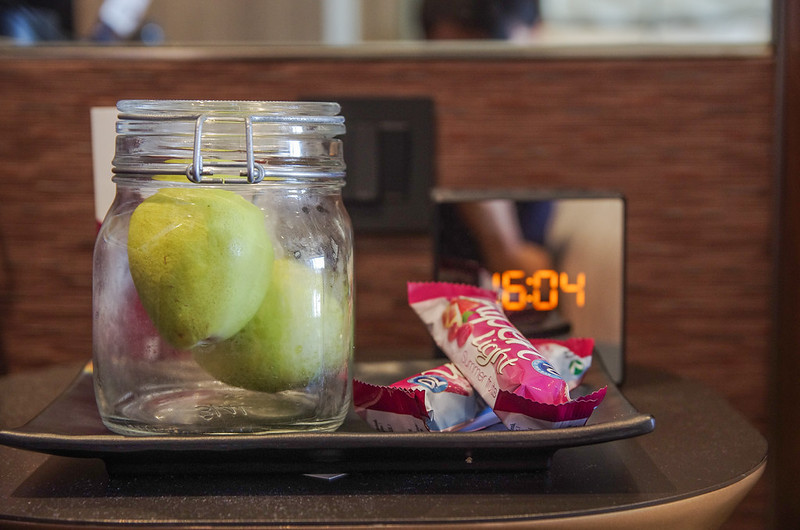 As an IHG Rewards Club Elite member, I was given a welcome amenity in my room shortly after I checked in. It consisted of some granola bars and two pears in a glass jar.

Due to the room layout, the glass panels separating the bedroom and bathroom are made with polymer dispersed liquid crystal (PDLC) film. This allows the panel to double as an extension of the bathroom window for natural light to come through and also as a privacy screen whenever one needs to do his business in the bathroom. 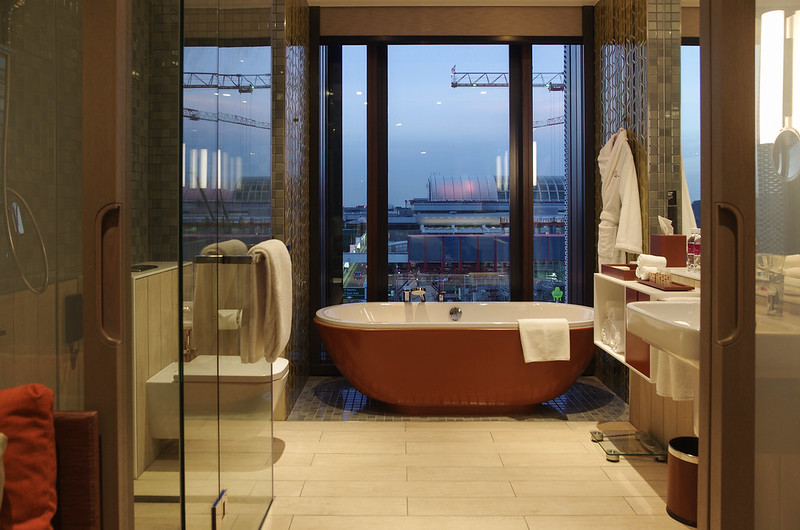 check out that bathtub 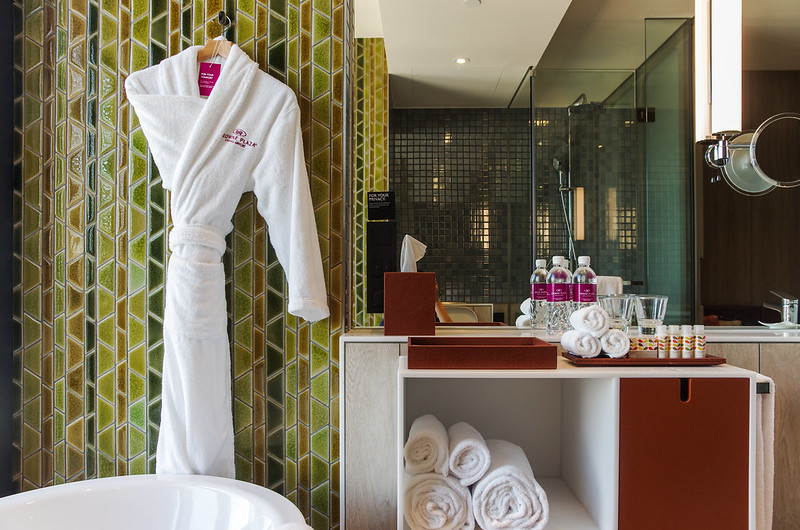 Considering the room size, I was pleasantly surprised to find a standalone tub. I have a hard time naming another hotel with a comparable room size that also comes with a tub (perhaps there is none!). This to me, is the most special thing about the room – the tub is attractively made and comes with a nice view of the future Jewel Changi Airport. While the airport view is a rare one to have in Singapore, it would be wise to draw down the curtains when taking a bath as I was told the windows are not glazed from the outside. A sign by the bathroom mirror also advises guests to do the same. 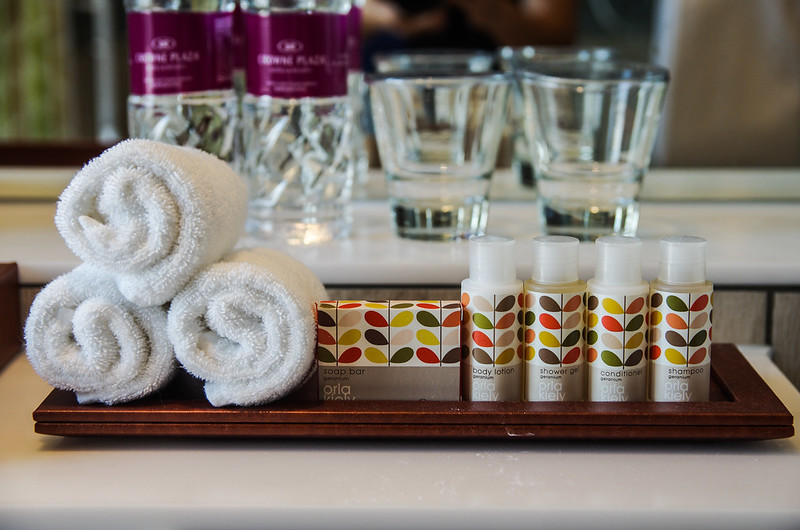 Those who have previously stayed in the main wing will be pleased to note that they use a different toiletries brand here. Bathroom amenities come from Orla Kiely which is a refreshing departure from the in-house brand. Having stayed in almost 60 hotels in Singapore, this is also the first time I’ve encountered Orla Kiely in a hotel in the Lion city. 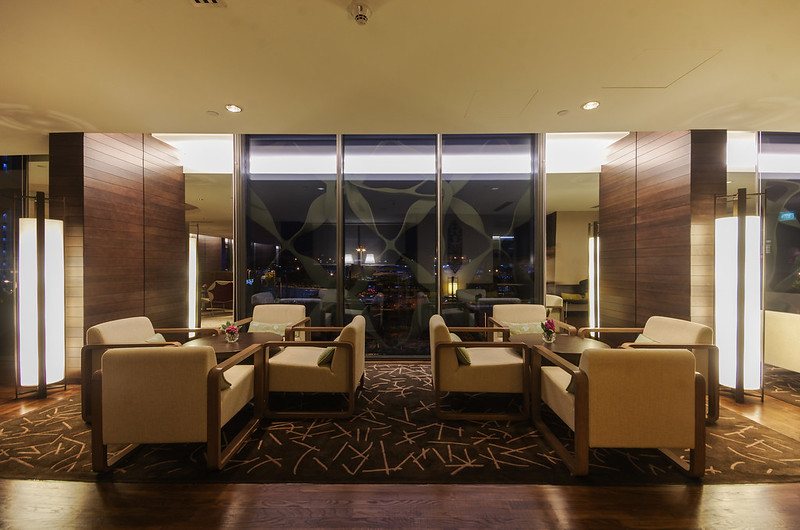 One of the things I was really looking forward to during my return to Crowne Plaza Changi Airport was the club lounge. While it does not boast of the most extensive evening cocktails in Singapore, I love it for its pool view as well as L-shaped layout that offers a number of quiet corners as one catches up on some weekend reading. Most importantly, I’ve never found the club lounge to be terribly busy – not during my first time and certainly not during my return visit. 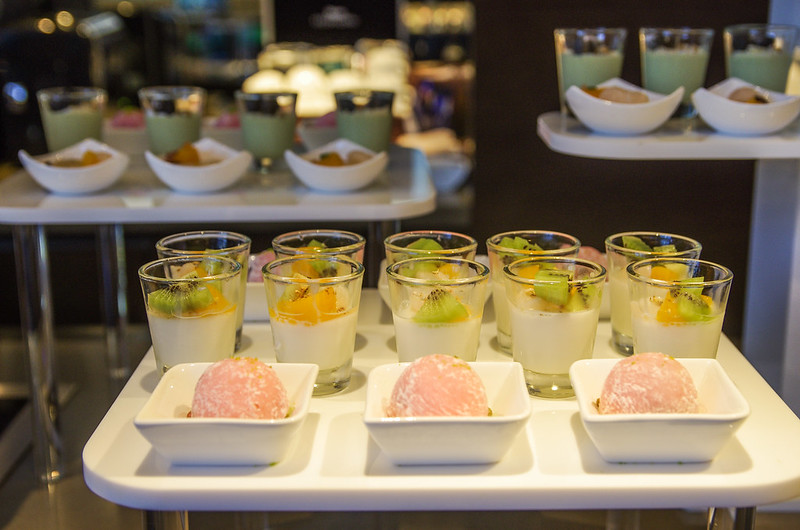 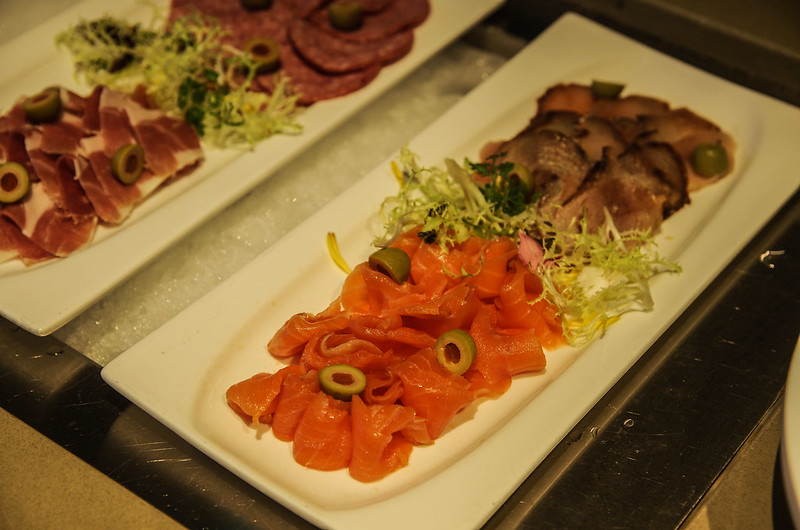 evening cocktails at the club lounge

Evening cocktails at the club lounge starts at 5:30PM for drinks while the small selection of food is served starting at 6:30PM. This is slightly different from other hotels where drinks and food would be served simultaneously during cocktail hour. Canapes were meticulously prepared, similar in style to what I remember from my previous stay here. While the spread probably won’t suit for dinner, it makes for a good pre-dinner affair especially when paired with one of the cocktails which staff members are happy to make for guests. 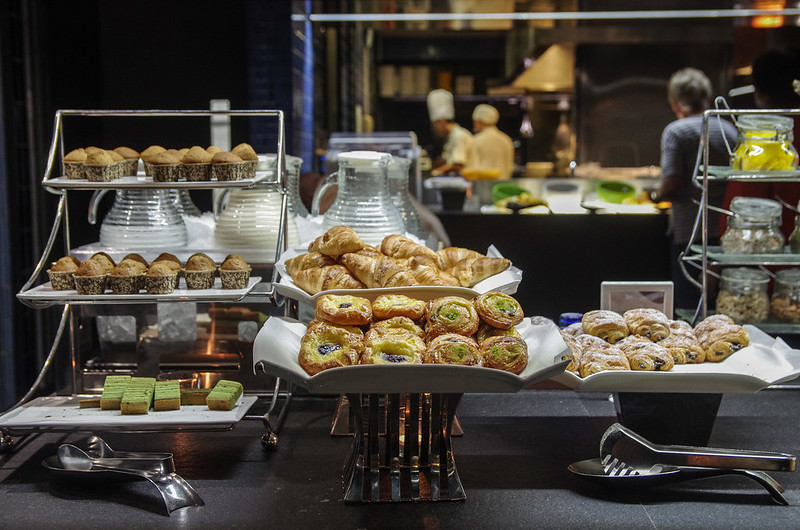 With my club lounge access, I could choose to have my breakfast either at the club lounge or at Azur, the all-day dining restaurant. As I was feeling particularly hungry that day, I chose to have my morning meal at Azur which turned out to be a great decision. The buffet spread here is intuitively arranged – with the Asian section comprising of local, Chinese and Indian dishes in one side of the buffet line and the Western section comprising your bacon, sausages and egg station in another side. 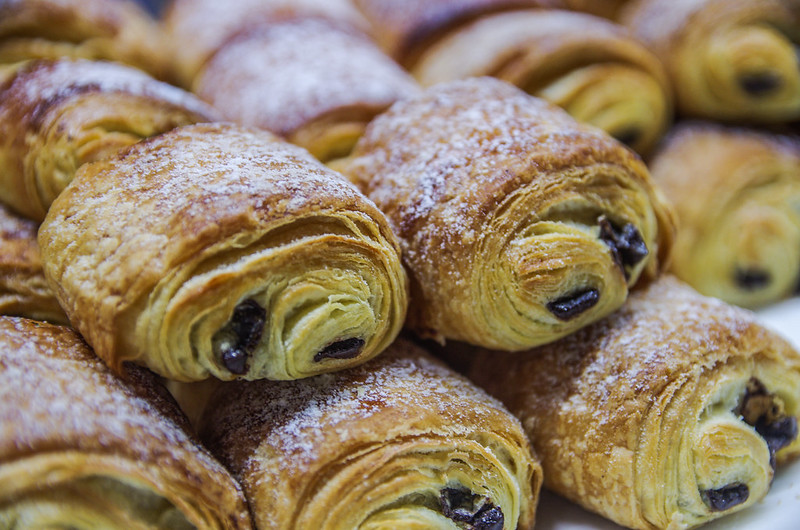 There is also a relatively good array of pastries here and if you like to have a good serving of pains aux chocolats for your morning meal, Azur is a great place to do it. Do note breakfast hours at Azur are from 6AM to 10:30AM Mondays to Fridays and 6AM to 11AM Saturdays and Sundays.

I was hosted by the property. However, all opinions are my own