Hotel Fort Canning is one of the most atmospheric boutique hotels in Singapore. Sitting prettily on a hill right in the middle of the city’s bustling CBD, the property has all the trappings of a heritage hotel even though its history as a place for lodging is fairly recent. The building housing it dates from 1926. It used to be the administration building of the British Far East Command HQ but was later occupied by the Japanese during World War II. The area surrounding the hotel, Fort Canning Park, is also known as the place where Singapore was surrendered to the Japanese in 1942. 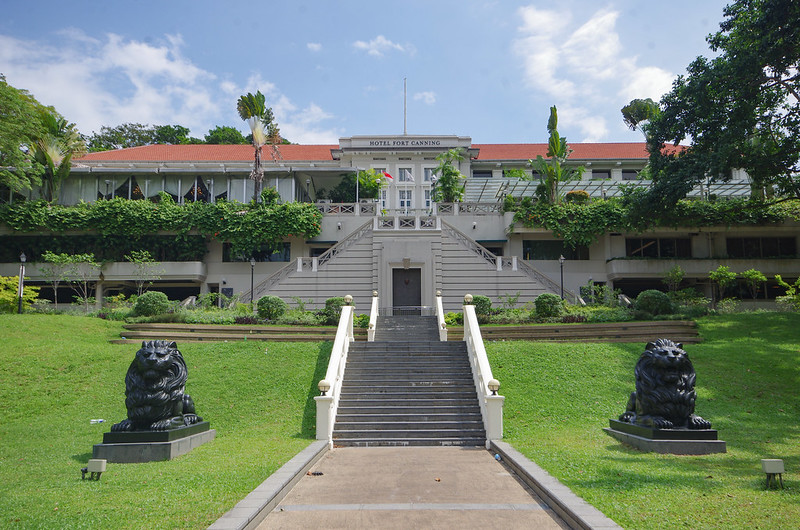 The building was finally turned into an 86-room hotel back in 2011. While the exterior evokes colonial splendor, the hotel is surprisingly technologically-forward, as I would later find out. I have personally been quite curious about this property since I first heard about it back in 2011. As someone who has a thing for heritage hotels, I was also quite excited when the opportunity to come over for a staycation came up.

Tip: While Hotel Fort Canning is geographically near Dhoby Ghaut MRT, it is probably not advisable to walk to the hotel if you are coming for the first time. You’d need to climb a flight of stairs – difficult if you are bringing luggage with you. 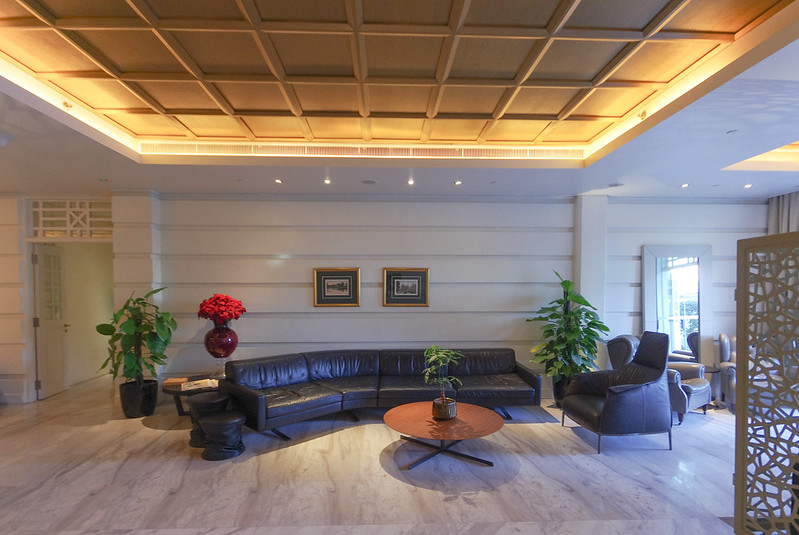 The lobby of Hotel Fort Canning is not particularly huge and in fact the construct reminds me of hotel lobbies like the Capella Singapore, where the lobby is housed in a heritage building, and the Villa Samadhi Singapore, which has a similar concept. However, Hotel Fort Canning seems to take it up a notch with its presentation of four archaeological pits housing artifacts from both the 14th and 19th centuries. The 14th century ones consist of items used by the royal household of the Majapahit kings while the 19th century ones are items associated with British colonial rule and Qing Dynasty wares. Apparently, the Fort Canning Park area used to be known as Forbidden Hill as the former kings and colonial rulers lived there. Today. there’s nothing forbidden about that place as it’s a popular place for a visit among locals, joggers as well as the odd history buff. At its peak, Fort Canning Park reaches an altitude of 61 meters above sea level, making it the highest natural point in the CBD. 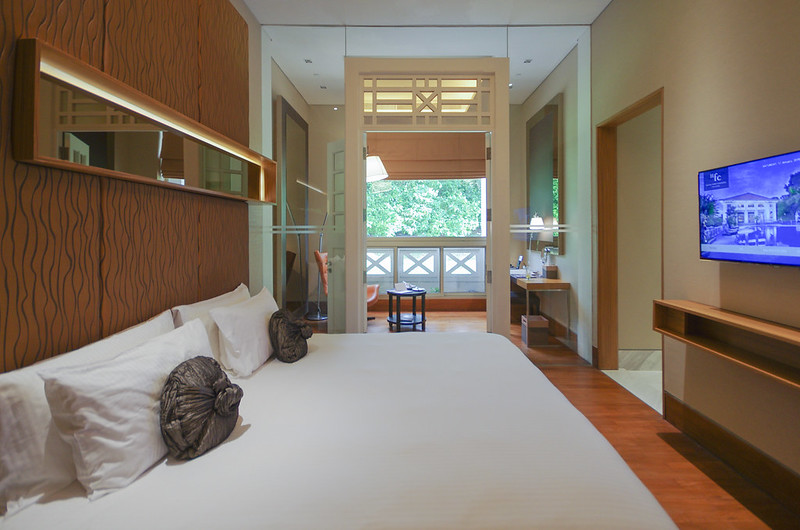 For an 86-room property, Hotel Fort Canning has no less than 6 room types. For this instance, I stayed at a Premium Room which is two notches above the base level Deluxe Room. 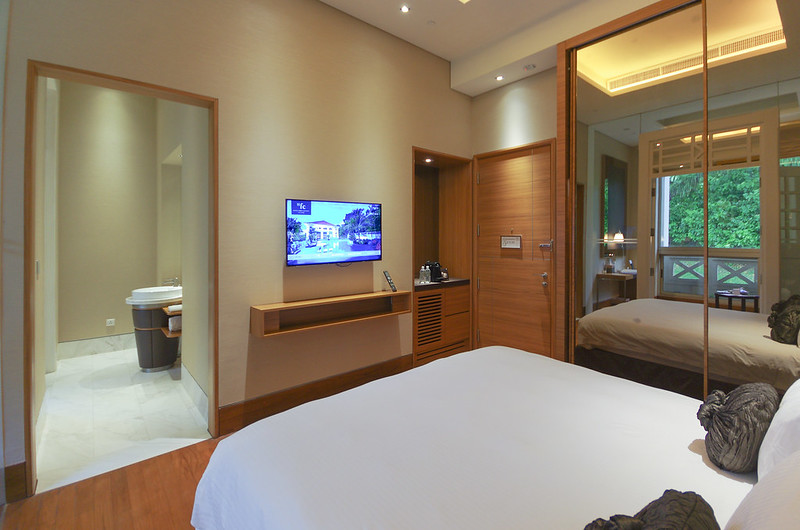 Measuring roughly 39 square meters, the configuration of the Premium Room shows how the property thoughtfully incorporates the existing infrastructure into the room design. The concept here is thoroughly modern, with sleek furnishings from Italian designer Poltrona Frau and fabrics from Jim Thompson. The room can roughly be subdivided into three portions – the first is where the bed and wardrobe are, the second is the naturally-lit working space which originates as a veranda back in the colonial era and the third is the bathroom which also used to be part of the veranda. 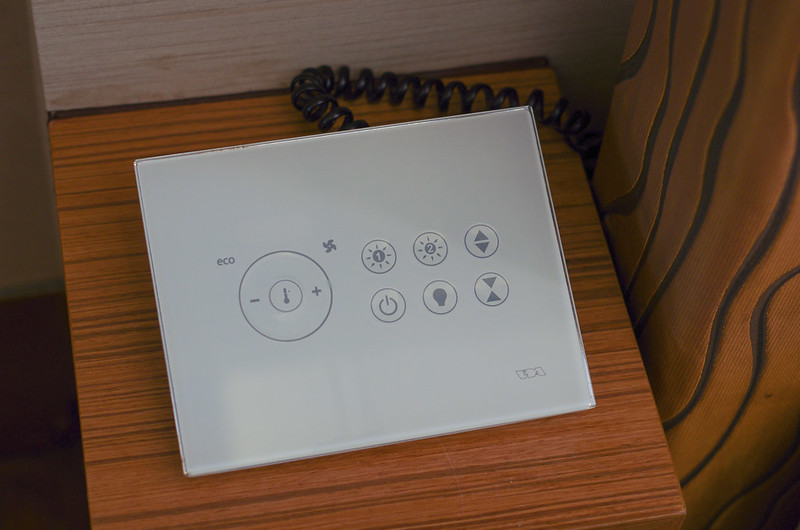 Any guest checking-in at the Hotel Fort Canning will be shown personally to the room by the front desk. Other than presenting the hotel as service-oriented, this gesture is also necessary in a way. The technology behind the room controls is relatively advanced and some guests may need help in being shown how it works. Aspects such as the room temperature, curtains and mood lighting can be controlled through a remote set beside the bed. 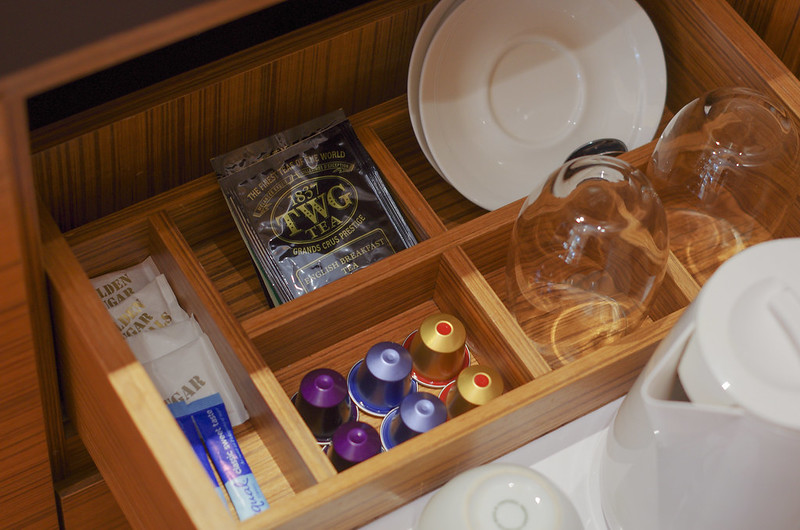 All rooms at Hotel Fort Canning come with a Nespresso machine and the hotel thoughtfully includes 6 coffee capsules as part of the complimentary beverages at the minibar. The teabags come from TWG. 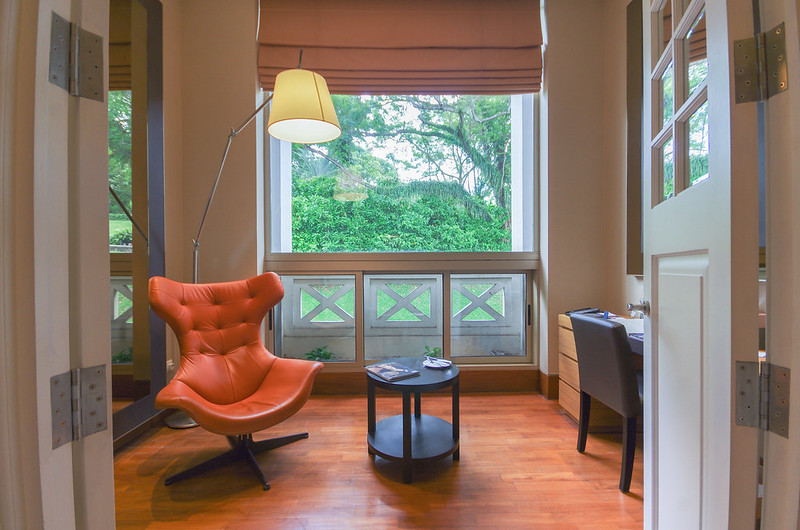 My favorite part of the room is perhaps the lounge/working area. Back in the colonial era, this used to be the veranda. To this day, one can still see reminders from this era especially when one looks out from the window and see an early 20th century style balcony. The Italian design is very much evident here especially with the funky lounge chair and the adjustable floor lamp. Mirrors are heavily used throughout the room to create a sense of space. 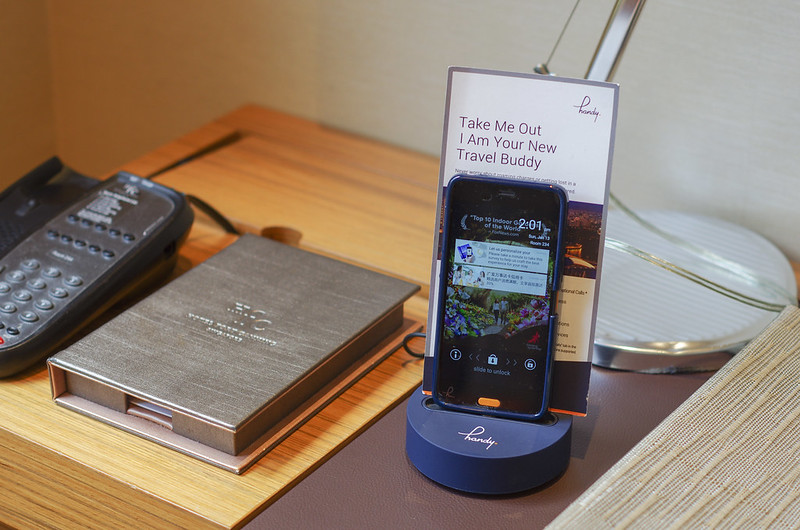 An increasingly common fixture in Singapore hotel rooms these days is the Handy Phone which allows for free local calls, international calls to some countries as well as mobile data. There is one, too, at Hotel Fort Canning. 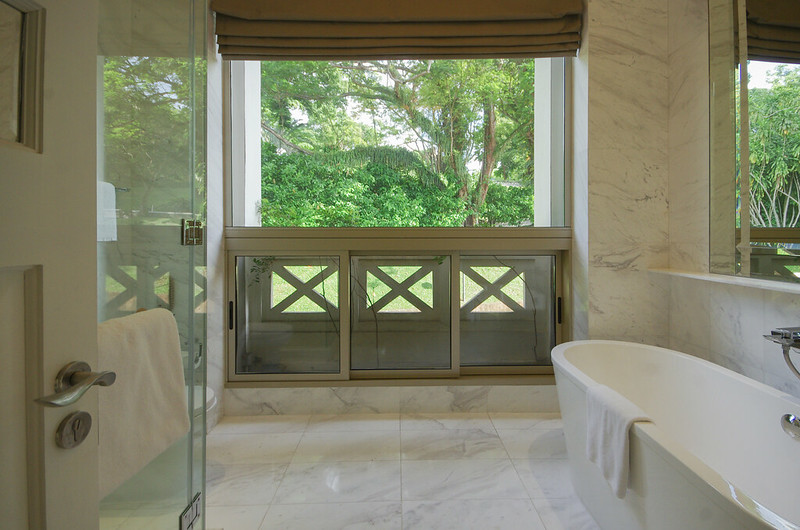 bathroom of the premium room at hotel fort canning

A short corridor leads the way to the bathroom and what a marvelous bathroom it is. There’s nothing like one decked in white for that luxurious feel. Naturally illuminated in the day, the bathroom comes with a separate shower stall and a bathtub. The only inconvenience here is that, as the building is only 3 floors high, the bathroom directly faced a pathway of Fort Canning Park. If any consolation, the path is partially covered by shrubbery but it’s still a good idea to draw the curtains when doing one’s personal business. To my understanding, those rooms facing the city don’t have this problem as the hotel is situated high up on a hill. 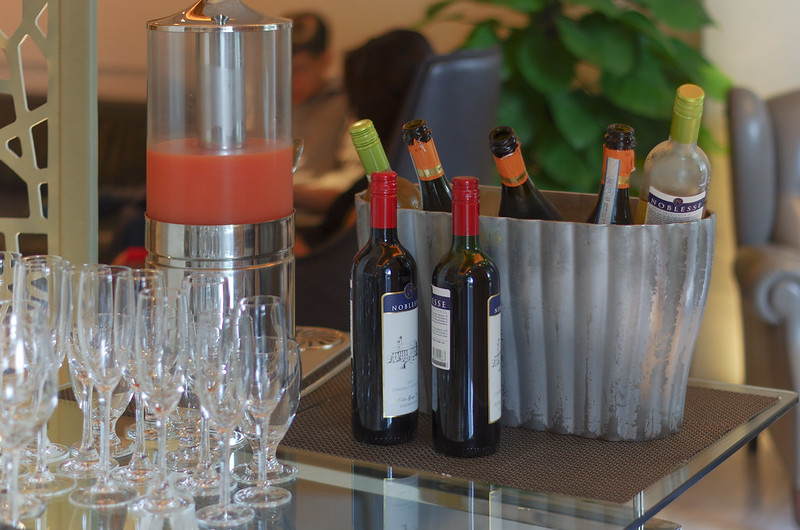 One of the unique selling points of Hotel Fort Canning is its aperitif hour from 6PM to 7PM which staying guests get to enjoy. There is no club lounge here so this in a way replaces that. For an hour, guests get to have free-flowing alcohol plus some canapes. 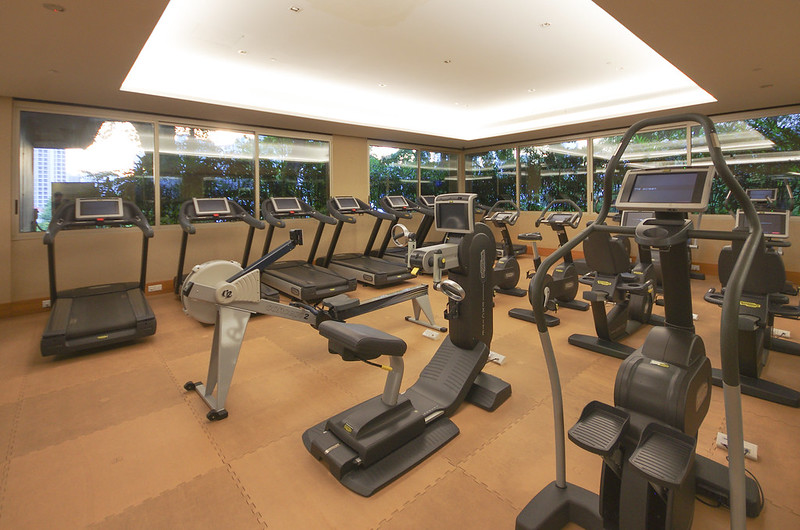 In terms of facilities, the hotel has more in common with large chains as one finds everything from swimming pools, to a gym and even a spa. The property is part of a wider complex that includes a country club called The Legends Fort Canning Park so some of the facilities are shared. I dropped by the fitness centre for instance and found that the venue could very well qualify for a full-fledged gym. It has the complete set of equipments that one would probably need for a long-term exercise regimen. 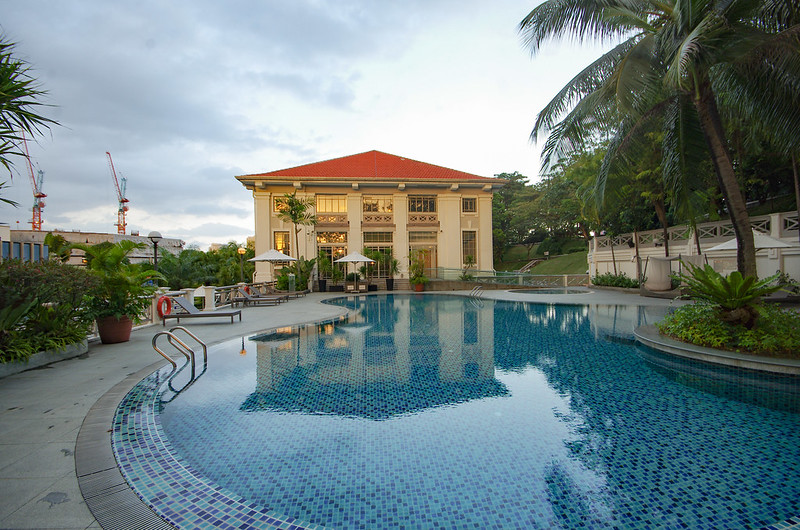 Hotel Fort Canning also has not one but three swimming pools. For a property with just 86 rooms, this means guests will never find it too crowded at any time of the day. Those with sensitive skin like myself will also be relieved to know that the water used in the pool is chlorine free. 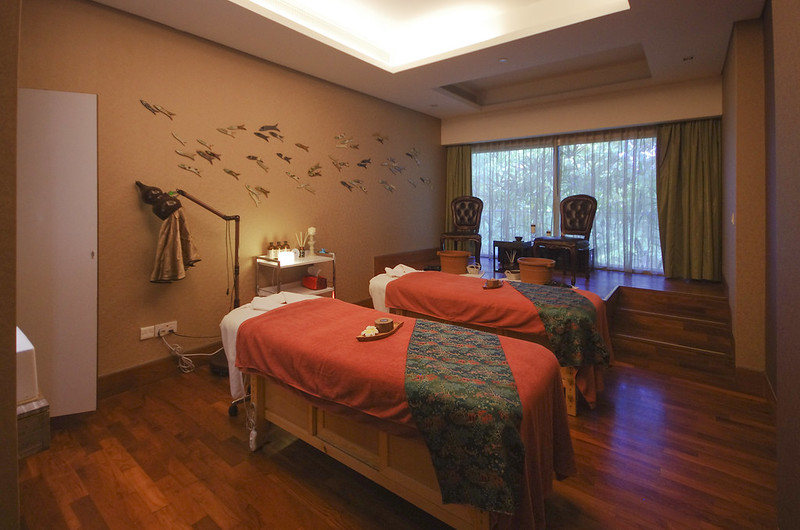 The spa called Chinois Spa is actually a third party with branches elsewhere in Singapore. However, the outlet at Hotel Fort Canning works closely with the hotel for tie-ups. One thing I noticed about Hotel Fort Canning is that it’s very popular among couples looking for a romantic getaway. The hotel has a tendency to offer room packages with spa treatments or spa credits built in, as with their Valentine’s room promotions for instance. During my stay, I managed to try their Fusion Massage which incorporates the best of a sports massage as well as that of an aromatherapy massage. The result was a deeply relaxing treatment where the therapist also worked to make sure any knots and fatigued muscles were relieved. 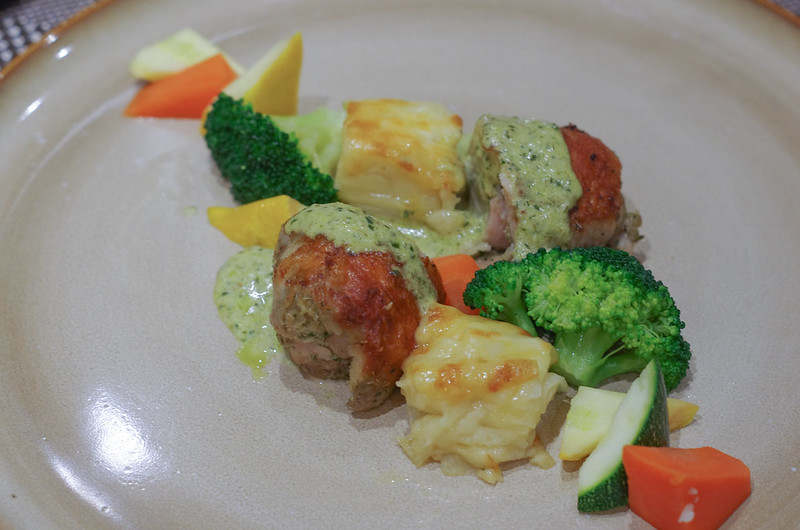 chicken roulade at the salon

The Salon is Hotel Fort Canning’s sole restaurant. Breakfast is served here and the venue is also open for lunch and dinner. I got to try the food at The Salon on two occasions, for breakfast (as part of the room stay) and for dinner. Outside of breakfast hours, The Salon presents an eclectic menu with both local dishes as well as international ones. House specialties include the Lobster Nasi Lemak, Chicken Roulade while desserts like the Chocolate Lava Cake prove to be popular among the mostly local clientele. Lunch and dinner sets with a main and dessert or appetizers are also available for S$34++. 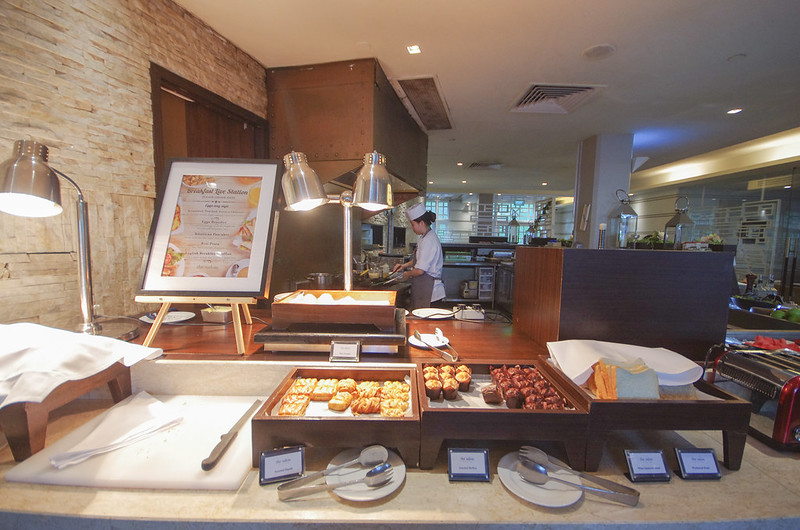 The breakfast spread here is relatively modest but most dishes were of good quality. I personally found it well suited to my own taste bud. On one hand, I can have local favorites like nasi lemak but I can also opt for healthier alternatives such as steamed broccoli if needed. 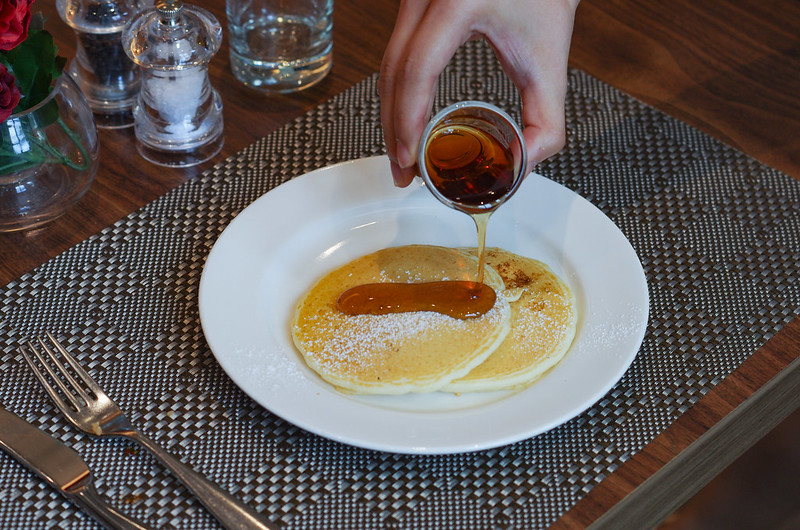 Eggs are made to order. I love to have pancakes during breakfast and thought it was a delight to see it as part of the made-to-order menu. This ensures this breakfast staple reaches my table hot.

For a boutique hotel, the Hotel Fort Canning pleasantly provides a comprehensive hotel stay experience. No wonder then that the property is so popular among leisure travelers and locals for staycations. Its location within the Dhoby Ghaut area also makes it accessible while its hillside location affords an “away-from-it-all” kind of vibe. For locals looking for staycation ideas, this hotel’s 6 eclectic room types means that there’s always a different experience to be had with each stay.

Hotel Fort Canning has a number of staycation packages being offered starting from S$339 net and inclusive of a stay in a Deluxe Room with breakfast. Other variations are also available including a picnic basket set which you can enjoy on the lawns of Fort Canning Park. This property also accepts usage of the SingapoRediscovers vouchers. You can book here.