The building where the Holiday Inn Singapore Atrium

now stands in Outram Road is no newcomer to the Singapore hospitality scene. It was previously known as Glass Hotel and subsequently the Concorde Hotel. Its latest incarnation as a property under the IHG Group has greatly increased its visibility in recent years and its latest refurbishment in 2014/15 has made it a 4-star hotel offering value that is hard to beat in a city where hotel rooms are notoriously expensive. A couple of weeks back, I checked out the hotel via a weekend stay. 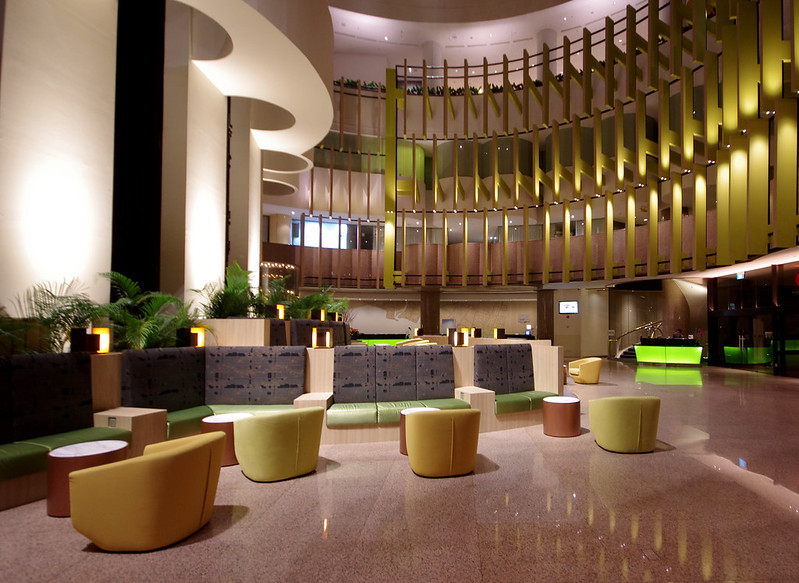 As an IHG Rewards Club elite member, I was given a coupon for welcome drinks upon check-in. What was particularly surprising that day was that the hotel had a special lucky draw which I’ve not encountered before. They asked me to pick a card which contain varying rewards. The one I picked awarded me with 500 points. Not a lot, but the surprise was certainly pleasant. I was also reminded that as a hotel guest, I could enjoy 25% for any meals I have at the in-house restaurants. 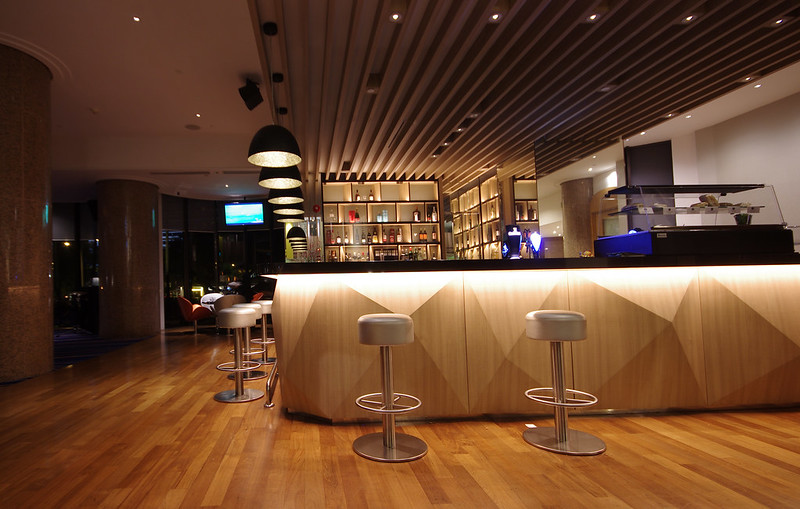 Having stayed at the Holiday Inn Singapore Atrium some years back, I noted how the lobby has been transformed to look a lot more inviting than it was previously. The light green color which is a hallmark of the Holiday Inn brand featured prominently in new panel fixtures meant to accentuate the hotel’s atrium concept. 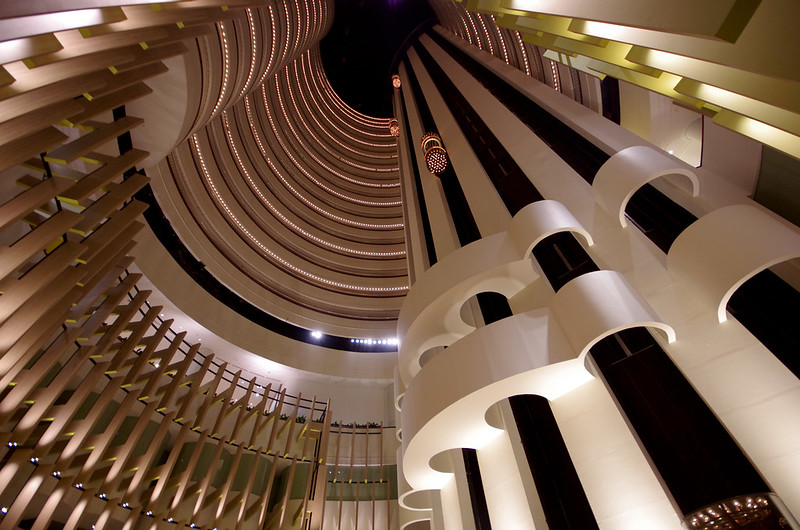 I love how futuristic the hotel looks when you view the atrium from the lobby. 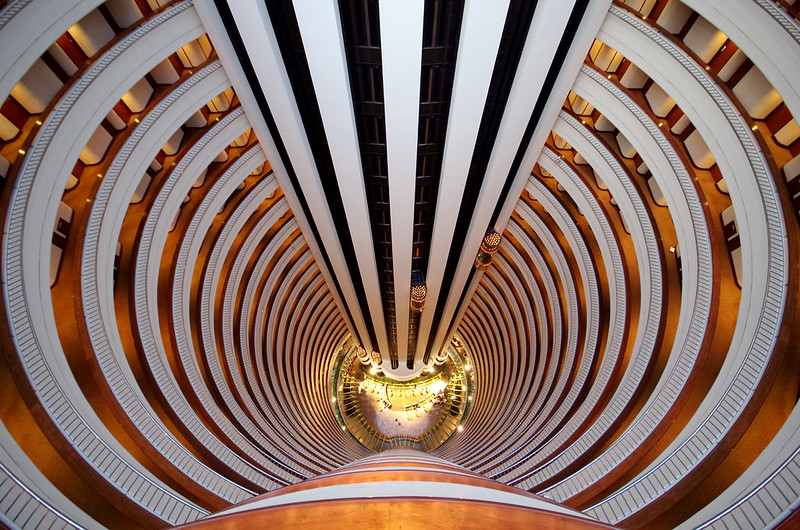 It has a different but likewise futuristic effect when viewed from the upper floors as I went to locate my room. 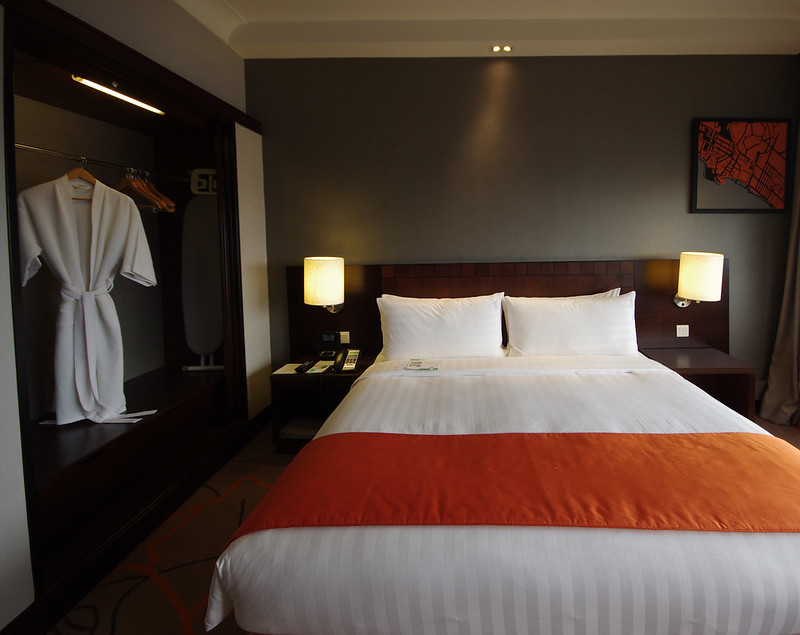 I was billeted at an Executive Room for this stay at Holiday Inn Singapore Atrium which essentially meant that my room was in one of the two highest floors of the hotel. Having stayed at this hotel previously, I could still tell exactly what changed with the refurbishment. While it was not a total makeover – certain elements such as the cabinets in the executive rooms were kept in the same state – the refresh was more in keeping with the standard Holiday Inn look that permeates the chain’s newer properties. 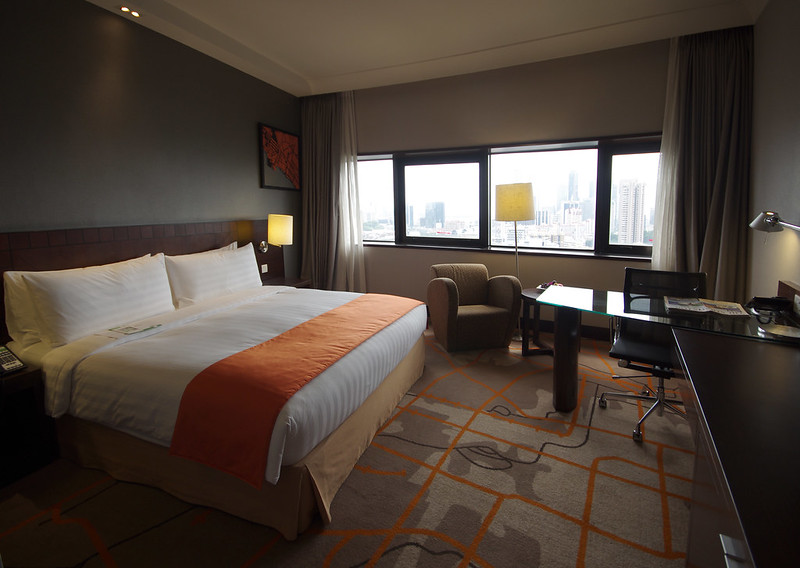 That being said, the wallpaper, carpet, bedding, painting on the wall and bathroom were new. As is my experience with Holiday Inn and Holiday Inn Express properties, pillows were labeled “soft” and “firm” while the bed was a delight to sleep in. 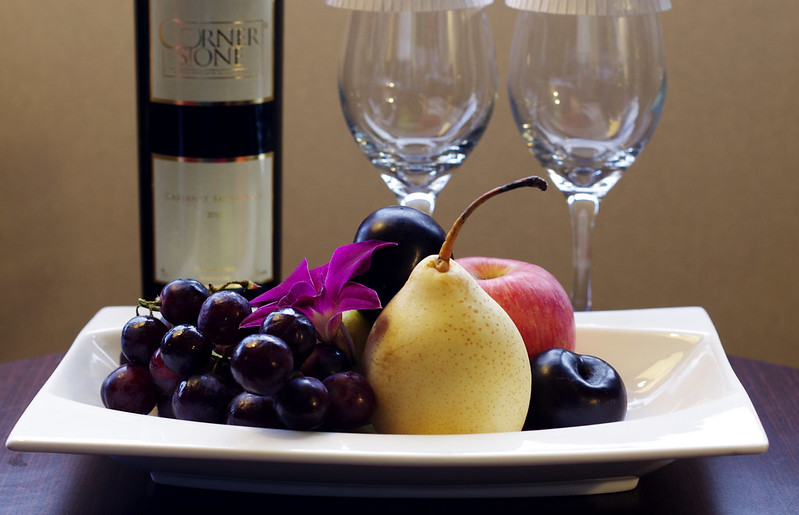 As was my experience way back, I was given a fruit basket due to my IHG Rewards Club status but what I did not expect was the bottle of wine they delivered to me which seems to be a new thing the hotel is giving out to elite members. 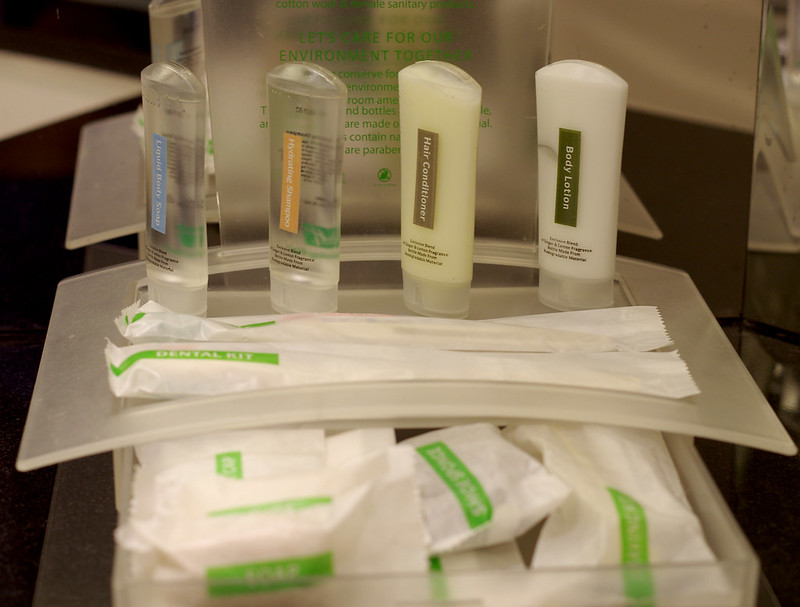 As I mentioned previously, the bathroom was refurbished. Gone were the small flesh-colored tiles. The color scheme had been transformed to a sleek black and white. That being said, toiletries were provided as copiously as I remembered from my last stay. If you have stayed at a Holiday Inn hotel before, particularly in Asia, you would be no stranger to their bar soap with oat meal bits. Just one of the little fun quirks in an otherwise standardized product. 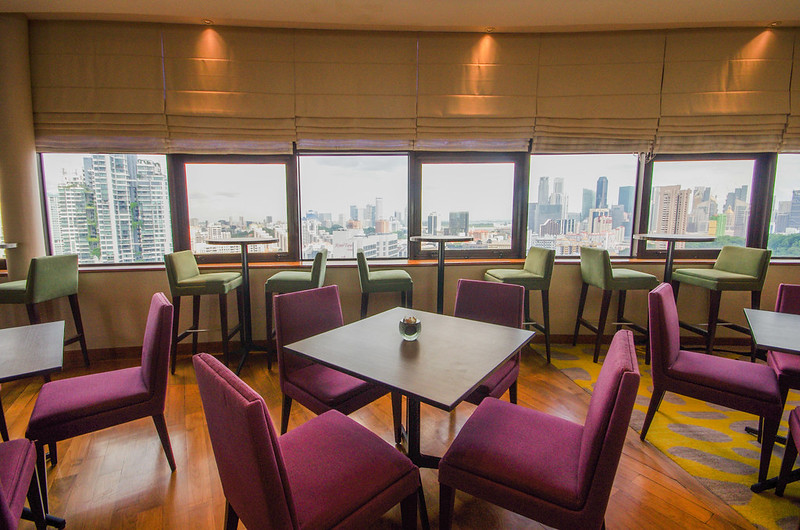 I paid the Executive Lounge of the Holiday Inn Singapore Atrium a visit later that day. I must say they did a good job in updating the interiors. Gone was the tacky flooring and it now sported a contemporary look. The lounge area was also extended during the renovation – one of the rooms adjoining it had been cleared to become part of the lounge. 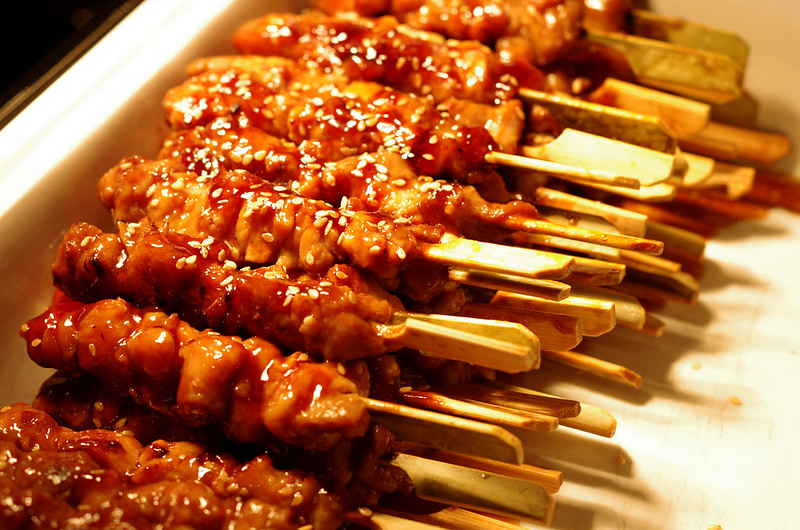 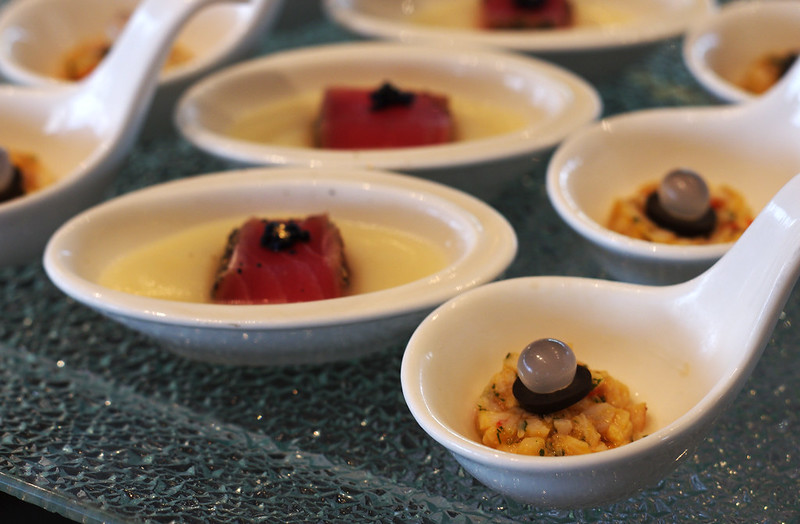 At 6PM, they served evening cocktails with a range of drinks, hot items and canapes. While the cocktail offerings were rather modest, I did find them to be of value when compared against the property’s price point. At the time of my visit, I chanced upon some delicious yakitori, a decent cheese selection, and seared tuna canapes among others. Though positioned as a 4-star hotel, this property’s executive lounge staff were among the most proactive I’ve encountered. They kept approaching me to ask what I wanted to drink and cleared my plates as soon as I finished my food. 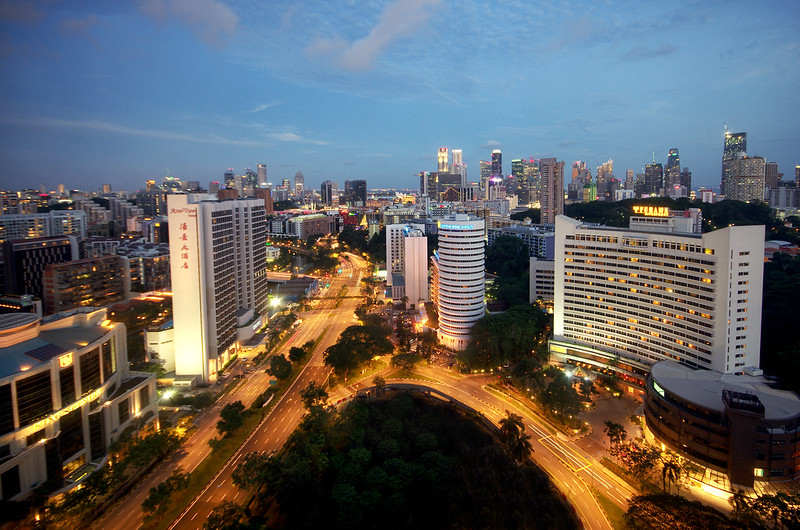 the view from the lounge

If you do find yourself without a smartphone or laptop during your stay at the Holiday Inn Singapore Atrium, the executive lounge has a PC for guest use. The business center downstairs is also open for all guests (regardless of lounge access). 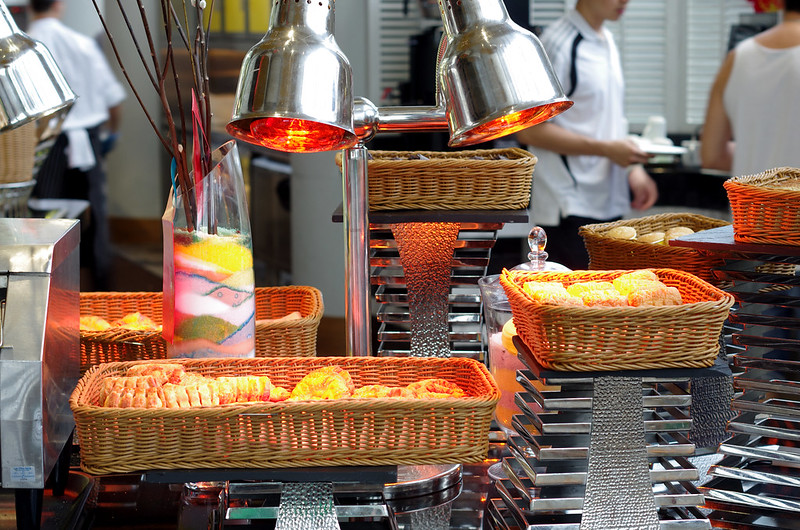 Due to my Executive Lounge access, I could choose to have my breakfast either at the lounge or at the all-day dining restaurant, Atrium Cafe. Experience dictates that the all-day dining restaurant would have the larger spread so I ended up having my breakfast there. As with any hotel though, it usually gets busy during Sunday mornings so I made sure to go down for my morning meal before 9AM. 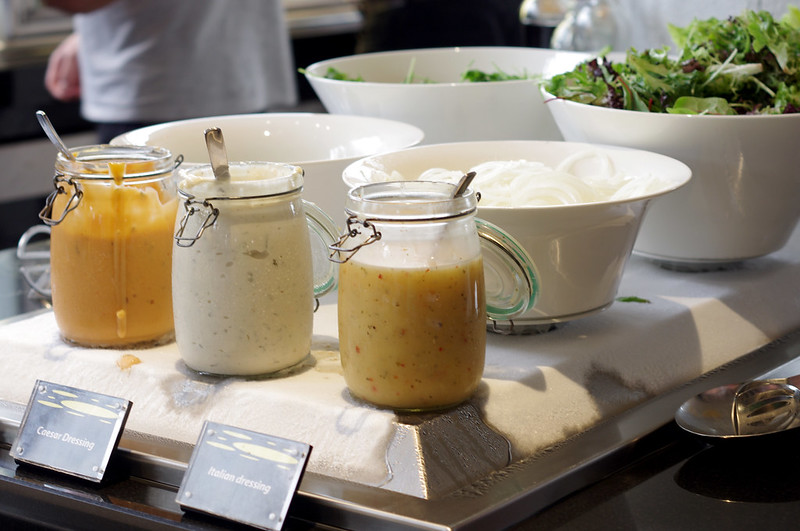 The spread was reasonable for a hotel of this category, with the usual mix between western offerings such as bacon, croissants, salads, cold cuts and scrambled eggs while I also did spot some local and Chinese staples such as siu mai and porridge. What I particularly liked about the breakfast at Atrium Cafe was the open setting which allowed a lot of natural light to come in.

has been my go-to hotel in Singapore as it offers value without sacrificing on the creature comforts of a 4-star quality property. I am glad to see that even after the refurbishment, the hotel still manages to retain that value with room rates that are sometimes even cheaper than its sister hotel, Holiday Inn Express in Clarke Quay just down the road which theoretically is a notch lower in terms of star rating. The refurbishment may not have encompassed the entire hotel infrastructure but then again, it did not have to.