Ho Chi Minh City is the commercial hub of Vietnam. Although less traditional than the capital, Hanoi, and possessing less potential in terms of outdoor activities compared to Central Vietnam; the city which is also still called Saigon to this day offers a lot of diversions to keep the traveler busy. From quirky concept cafes to marvelous architecture as well as ultra-happening rooftop bars, Ho Chi Minh City is perhaps better thought of as the place to go in order to experience modern pleasures. If you are making your way around the country, this city is a nice complement to the other parts and personally, I would think of Ho Chi Minh City as the best place to end a trip around Vietnam.

Other than that, if you are here just for a short getaway, Ho Chi Minh City also has plenty of activities to keep you preoccupied for 2 or 3 days. This Ho Chi Minh City itinerary shows you where to go and the places to eat during that jaunt.

Tan Son Nhat International Airport is the gateway to Ho Chi Minh City and is the busiest airport in Vietnam. Its location is pretty close to the city center, often requiring just a 15 minutes drive if there is no traffic jam.

Start the day in the Notre Dame de Saigon 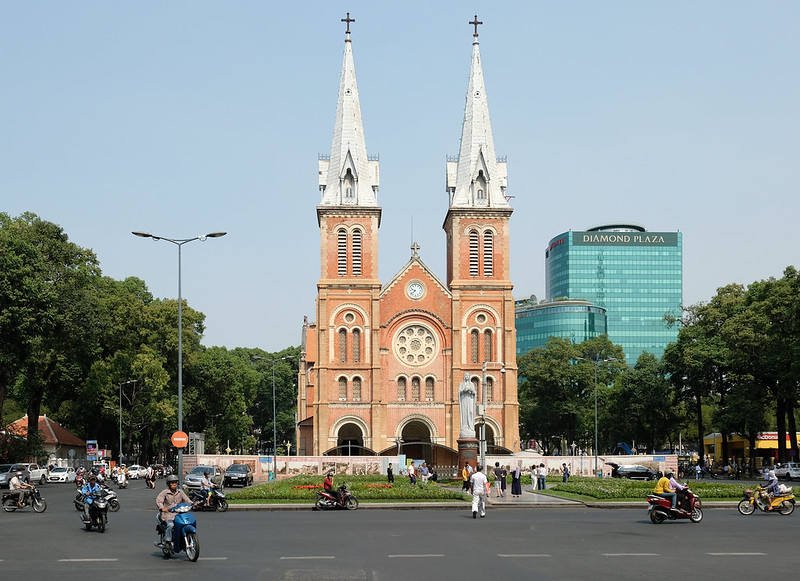 One advantage of Ho Chi Minh City is that many of its tourist attractions are close to each other, in District 1. Sidewalks for pedestrians have improved greatly the past decade, and it’s often quite pleasant to walk around District 1 assuming it isn’t too hot. Assuming you arrive in Ho Chi Minh City early in the morning, you can still beat the crowds if you make Notre Dame de Saigon (daily, 8AM to 5PM) as your first stop. Most people end up taking selfies or capturing shots of the cathedral from the outside, but if you can, check out the interiors as well. The stained glass windows, which were imported from France, are noteworthy.

Marvel at the interiors of the Central Post Office 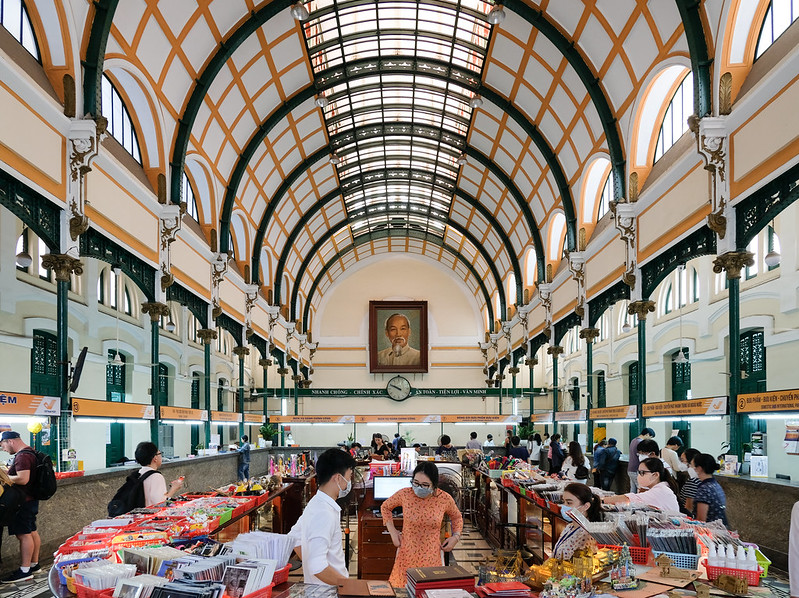 Early morning is also an excellent time to check out the Central Post Office (daily, 7AM to 9PM) next door. You’d still be able to snap a photo of the gorgeous hallway with Uncle Ho’s portrait in the middle without other tourists in the shot. The main draw here is the arched ceiling and the colorful tiled flooring. Completed in 1891, the post office building dates back from French colonial rule and was designed by Alfred Foulhoux.

Relive the 1970s at the Reunification Palace 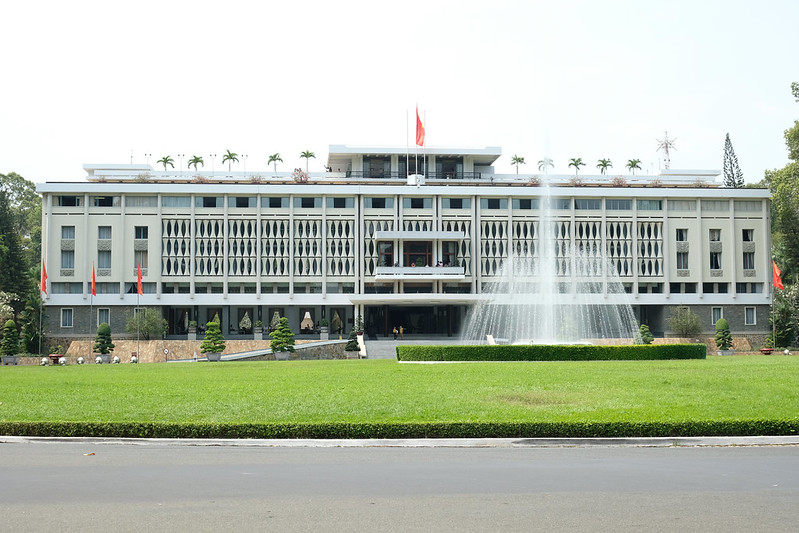 From there, it is a few minutes walk to the Reunification Palace (daily 8AM to 11AM, 1PM to 4PM). Formerly the palace of the President of South Vietnam, this gigantic building was converted into a museum after the end of the Vietnam War. The interiors are left as they supposedly were back in 1975, with vintage sofas and other decoractive items dating back from the 1960s when the palace was constructed. If you are feeling peckish by this time, there’s a cafeteria to the left side of the palace grounds which serve pho at an inexpensive price.

For a more intense look at the war, check out the War Remnants Museum (daily 7:30AM to 12PM, 1:30PM to 5PM) which is located just a block away from the Reunification Palace. It has been over a decade since I have been here but the memory of seeing those gruesome depictions of torture has been hard to forget. 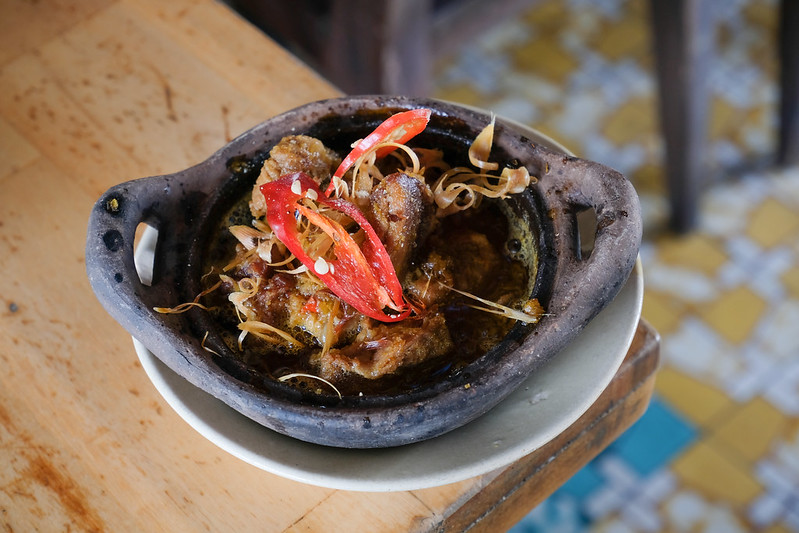 For a late lunch, I recommend heading to Secret Garden (daily 11AM to 10PM) which is just a short walk from the palace. The “secret” is really apt to this eatery’s name as you have to enter through an unassuming apartment complex and climb a few flights of stairs to get there. This rooftop restaurant is sheltered but is partially open so don’t come here expecting airconditioning.

Bitexco Tower and the air up there 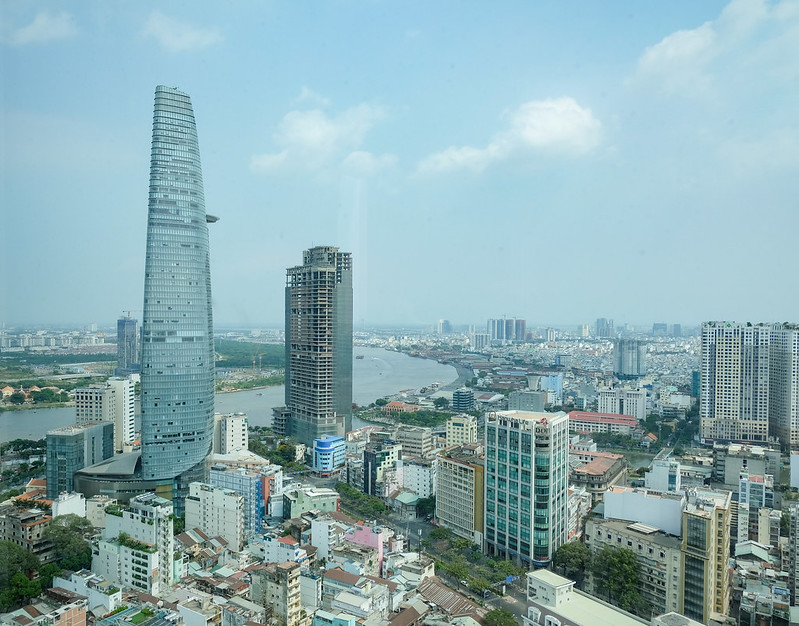 By early afternoon, it would be too hot to check out any of the outdoor attractions so the timing is just apt to climb up to one of the city’s tallest buildings – the Bitexco Tower. Here, you can find the Sky Deck (9:30AM to 9:30PM) from where you can survey the awesome view from this 262-meter tall building. The Sky Deck in itself is located on the 49th floor while the restaurant on the 50th/51st floors offer a nice atmosphere in the evenings.

Selfies Galore at The Cafe Apartments 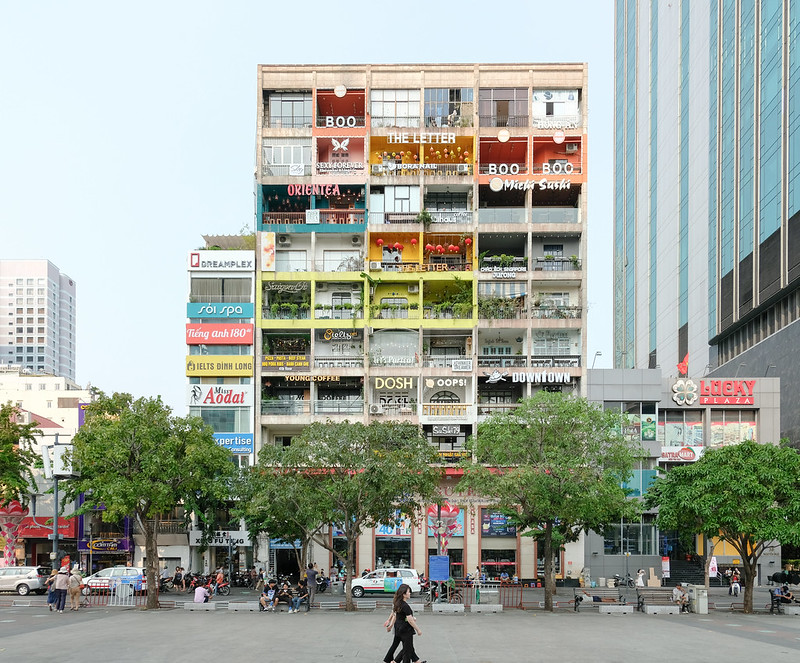 When it cools a bit, you can resume your exploration of Ho Chi Minh City’s outdoor attractions. The city center in particular, has an array of eclectic buildings ranging from French colonial grandeur to modernist constructs. Not far from Bitexco Tower is Nguyen Hue, an avenue with a wide pedestrian walkway in the middle. You will find a lot of locals hanging around here, especially towards late afternoon and evenings. One of the more iconic spots here is The Cafe Apartments. It is essentially one building with one store occupying each window and each one proudly displaying its logo. From afar, it makes for quite a photogenic spot to take a selfie. The Cafe Apartments is undoubtedly the most instagrammable spot in Ho Chi Minh City. 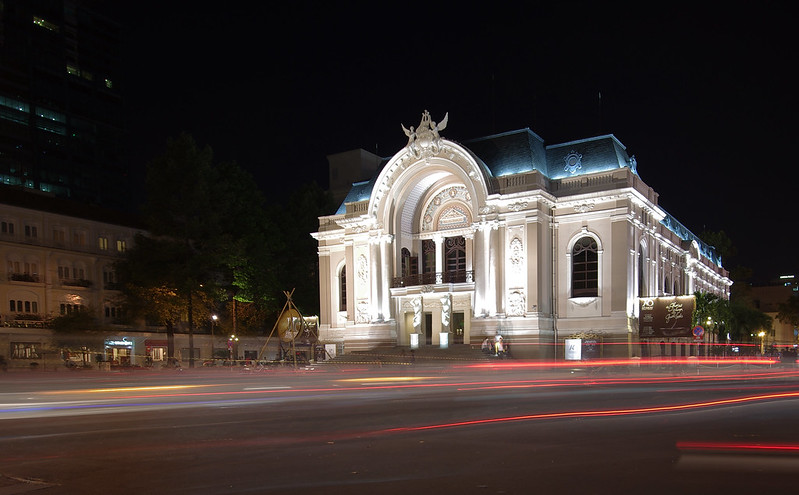 the city’s colonial building are also worth checking out at night!

At the northwestern end of Nguyen Hue is the City Hall or also known as Hotel de Ville. Prior to the instagram age (and the development of The Cafe Apartments a few blocks down), this was the most iconic spot in the city. The classic European style of this building coupled with Ho Chi Minh’s statue in front makes it a favorite for photos, even though casual visitors are not allowed to enter. As an added tip, come back during the evening when the exterior is floodlit. It’s a totally different sight from the day. Also nearby is the Opera House, another fine example of colonial architecture. The inside is even more impressive but visitors are only allowed to enter if they are watching a show. 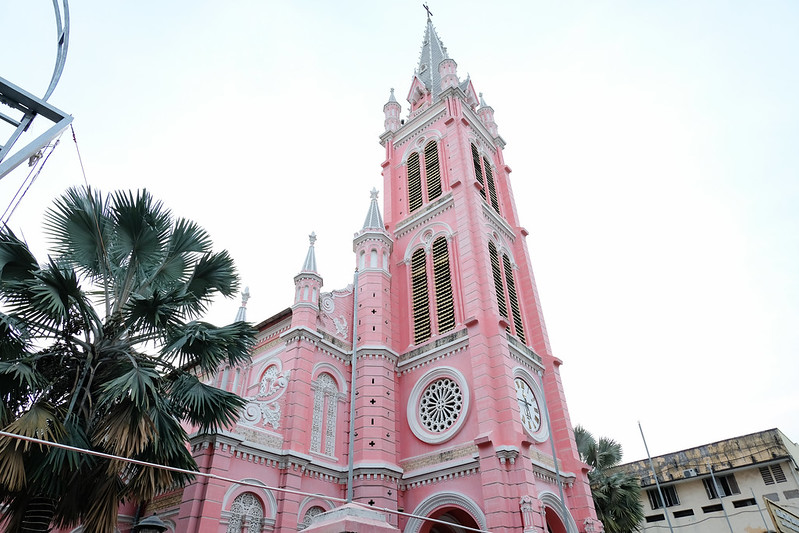 Before heading to dinner, check out the striking Tan Dinh Church. Dating back from the 1870s, the structure is known for its bright pink hue and makes for one of the city’s most photogenic buildings. The architecture here is a mix of Gothic, Baroque and Romanesque styles and in my view, is even more beautiful than the Notre Dame de Saigon. 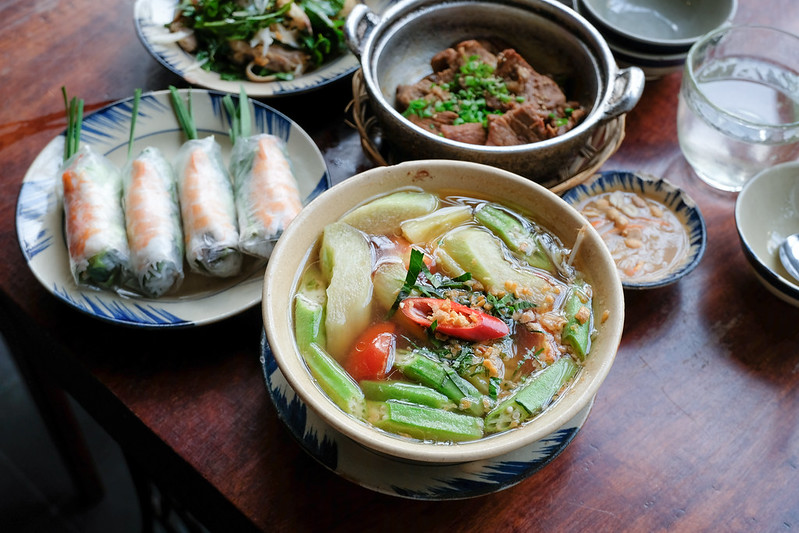 For dinner, check out Cuc Gach Quan (daily 9AM to 11:30PM) for its voluminous menu of local dishes. Set in a mansion with a lush garden, the dishes here evoke family-style cooking. Even the menu gives you much flexibility, often listing only ingredients and allowing for much customization in terms of the cooking and preparation. 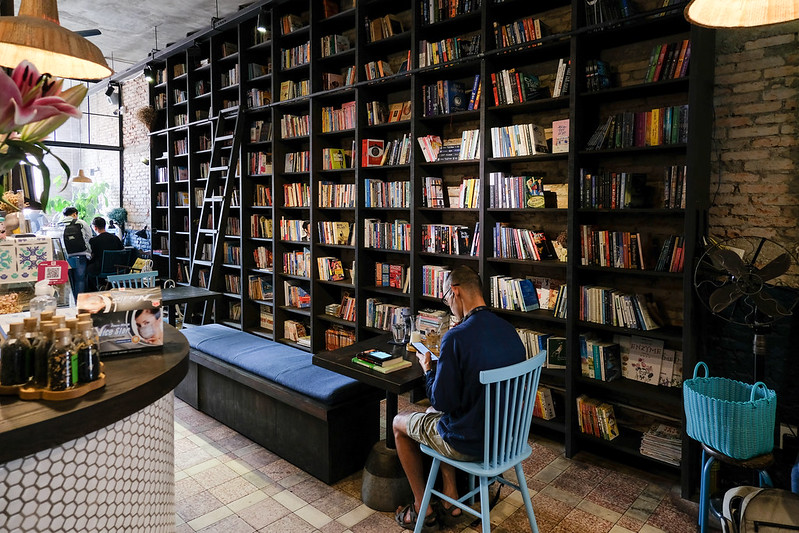 Start the day in one of Ho Chi Minh’s many cafes. The enterprising mindset coupled with the coffee loving culture of the Vietnamese has led to a wide array of concept cafes in Ho Chi Minh City. And indeed, there are too many of them that it’s hard to pack in more than 3 during a short visit to the city. One that is quite unique and also near many of the tourist attractions is Soo Kafe (open daily 8AM to 11PM) located just a few steps away from Ben Tanh Market. This is a favorite tourist hangout with its set up similar to a library. Customers can browse through one of the books on the shelf as they enjoy their espresso or latte. Do note that due to its popularity, it may be difficult to find a seat especially in midday / early afternoon when it’s especially hot outside. You also can’t go wrong with the ubiquitous Cong Cafe which has branches all over Vietnam. I particularly liked their coconut milk coffee. If you have more time for cafe-hopping, also check out The Workshop Coffee (daily, 8AM to 9PM) which has a distinct Brooklyn vibe. They specialize in cold brews.

Explore one of the city’s sprawling markets 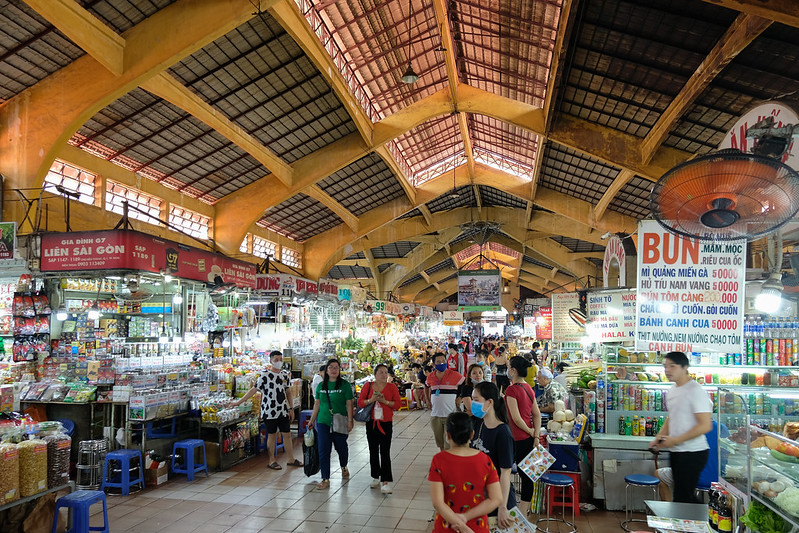 Everyone knows about Ben Tanh Market – Ho Chi Minh City’s main market located in District 1. It’s filled with shops selling apparel, food and even souvenirs. Given the rise of tourism in the city, all sections except those dealing with fresh food have become tourist-oriented and the price has become significantly higher than other markets in the city. I particularly like chewing on the local snack called “mang cau” or soursop candy. All in all, it’s up to you to weigh the cost – like is it worth taking a GRAB ride to a less touristy market for a few dollars in savings? If you prefer something more localized and authentic, I can suggest heading over to Cholon for the Binh Tay Market. You’ll find many of the goods there at a markedly lower price, and you get to check out Saigon’s version of the Chinatown, too.

Afterwards, check out a modern and more prosperous side to Ho Chi Minh City by visiting the city’s model community, Vinhomes Central Park. You’d feel as if you stepped into a different place altogether as you leave the city’s frenetic energy behind for some upscale condominium towers and chain stores. The country’s tallest building – the Vincom Center Landmark 81 – is also located here and it has its own observation deck open to visitors. 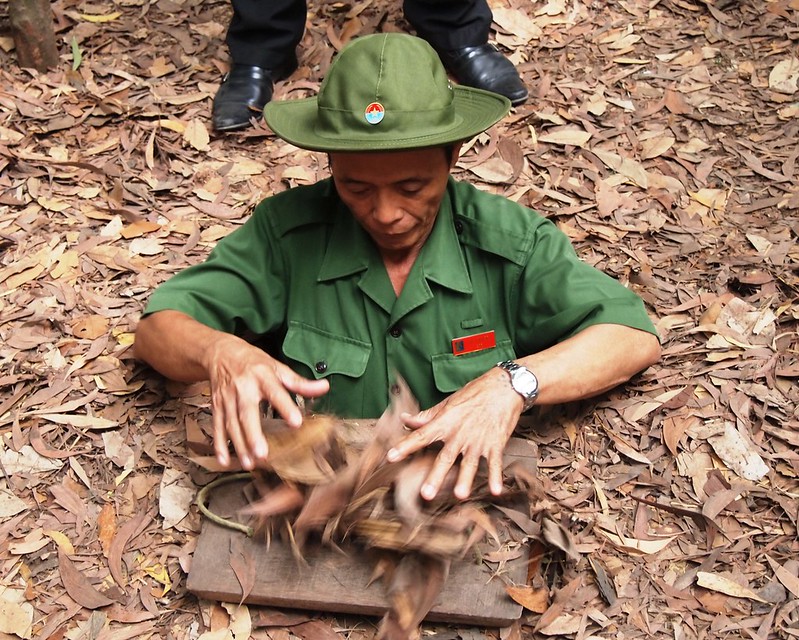 For the afternoon, you can join a half-day excursion to the Cu Chi Tunnels. The tunnels are an elaborate network used during the Vietnam War to transport goods and people. One of the most memorable parts of the tour is the revelation of one the hidden trap doors used during wartime to get to the tunnels. Visitors can also check out the booby traps used back then. 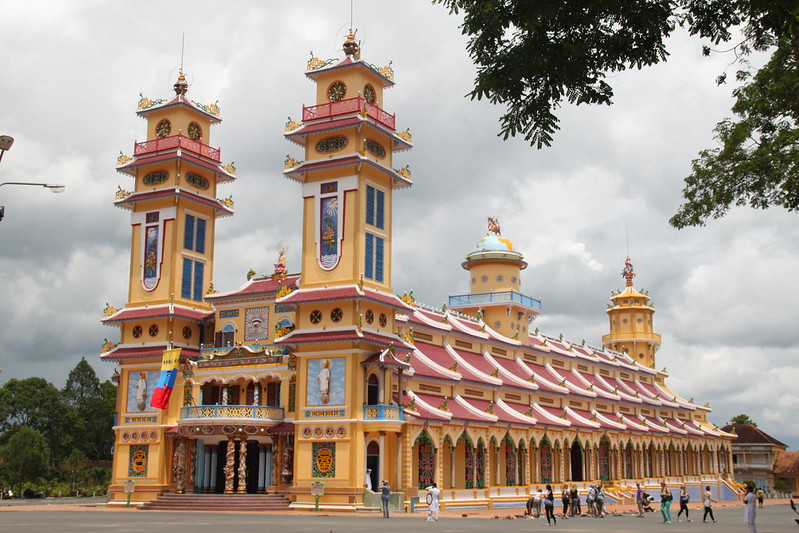 Depending on the time you can spare, and especially for full-day tours, the excursion to Cu Chi Tunnels may also include a stop at the photogenic Cao Dai Temple. The religion called Caodaism started here in Southern Vietnam back in 1926 and can be thought of as incorporating both Buddhist and Christian elements. This is especially evident in the temple where one can see dragons and architecture resembling a Chinese temple but with statues of Jesus Christ. It’s quite a unique and interesting place to check out especially on the way from Cu Chi Tunnels back to the city.

Where to Stay in Ho Chi Minh City 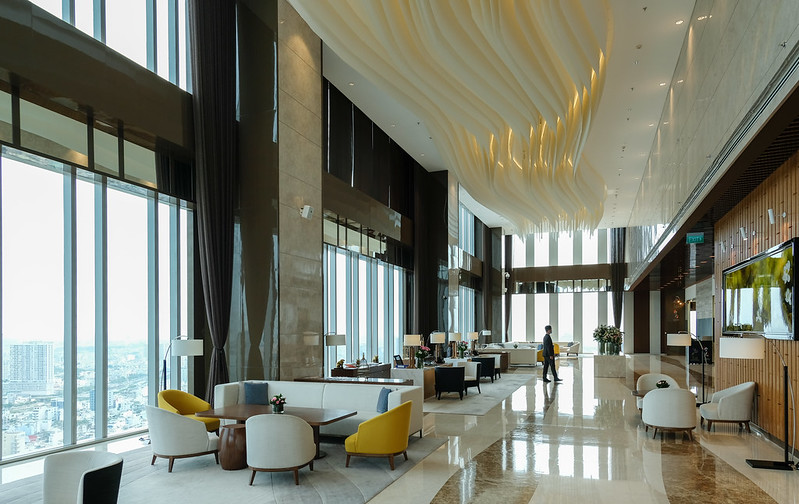 Budget – The Akoya Central Saigon Hotel offers immense value for the $30 to $40 it usually charges per night. Situated just a few steps from Ben Tanh Market and practically within walking distance to many tourist attractions, it sometimes feels incredible to think that rooms here also include a free minibar.

Midrange – Located right smack in the center of Ho Chi Minh City, the Liberty Central Saigon Citypoint boasts of a rooftop pool as well as modern and well-appointed rooms. It is practically within walking distance to many of the city’s attractions