It has been a long while since I’ve gone for the Halloween Horror Nights at Universal Studios Singapore. I went for the first one in 2011 and remember being awed by the visual effects and dedicated actors who made the haunted houses as spooky as possible. This wasn’t the usual amusement park scary house as I soon discovered. I went for my second one in 2016 and the enjoyment was not at all diminished despite being five years older.

This year’s Halloween Horror Nights is a play on Asian horror. There are Malay, Chinese and Japanese themed horror houses that complement a Netflix tie-up, Stranger Things. In total there are 5 haunted houses, 2 scare zones and 3 live shows this year. 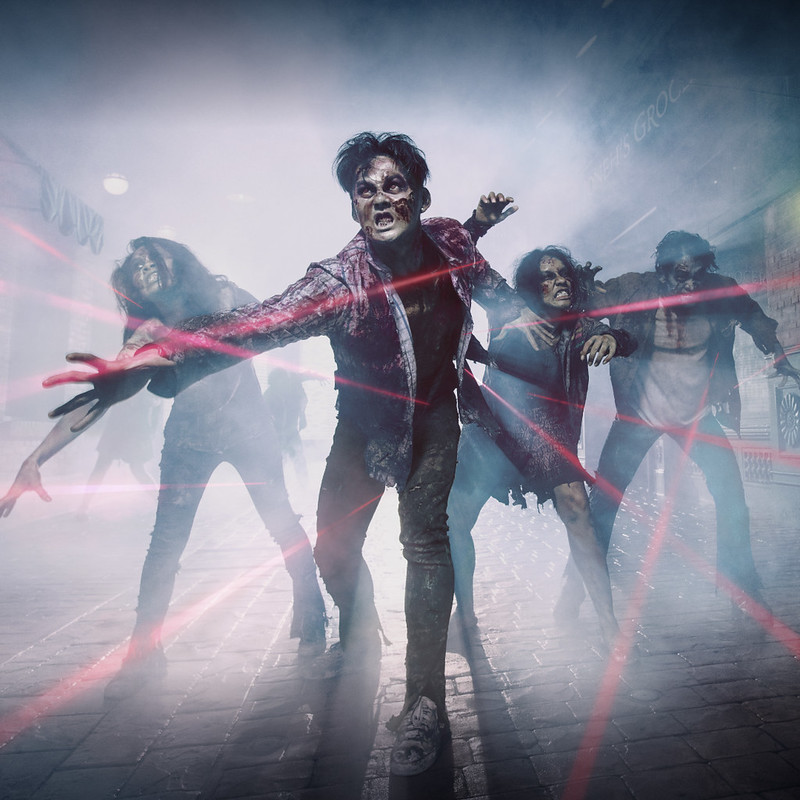 This has been my third visit to Halloween Horror Nights at Universal Studios Singapore and what I noticed is that the crowds initially gather at the haunted house nearest to the entrance (the one near Mel’s Diner) especially right after opening time at 7:30PM. As an added tip, try to venture to the farthest one first (located near Waterworld) and make your way gradually closer to the houses near the entrance as the night progresses.

Here are my impressions of the five haunted houses: 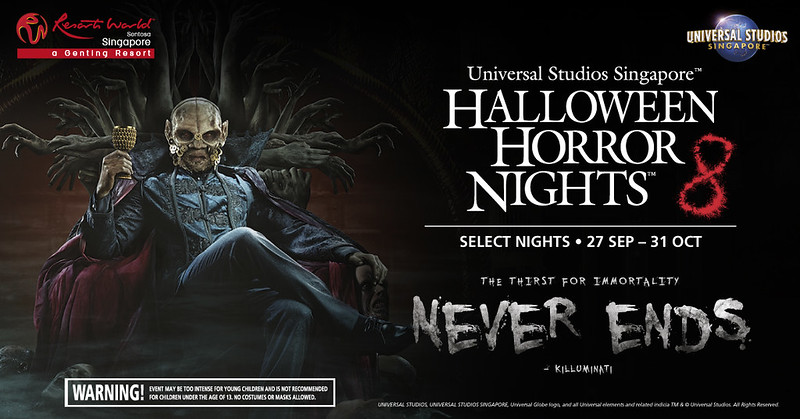 The house nearest to the entrance this year is Killuminati which is somewhat based on secret societies but with zombies and ghouls added in. This is one house that you’ll need to enter twice in order to get the full experience. There are two possible entrances here – I entered through one that revealed a live cabaret show made up of monsters. It’s a bit more interactive than the usual houses I’ve been to as it allows certain guests to even go up to the stage (if they dare).

The Haunting of Oiwa 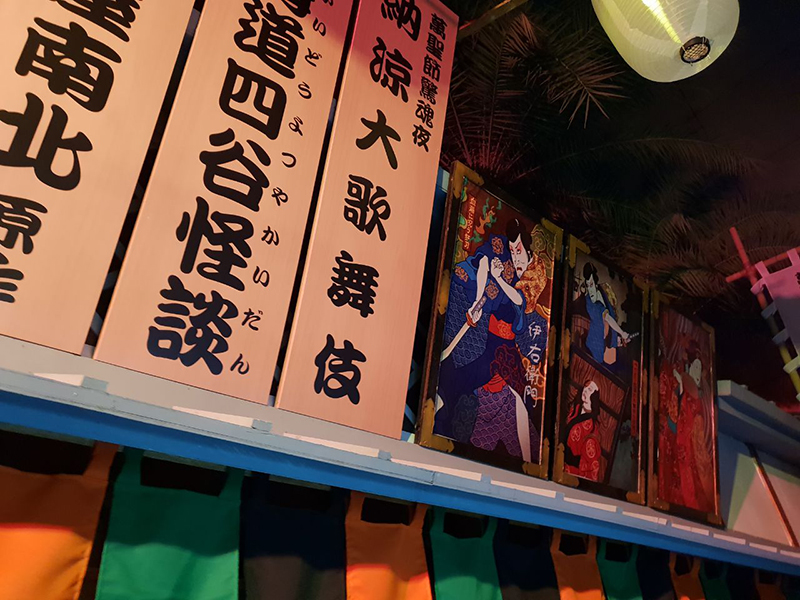 This is the first time I’ve seen a Japanese-themed haunted house here at Halloween Horror Nights and I must say the Haunting of Oiwa does not disappoint. There’s a certain eeriness I typically associate with Japanese horror movies so seeing a scary Japanese house in front of me certainly gave me the chills. The house is loosely based on a marriage gone wrong. Some of the creepiest parts here include walking on a long and pitch black corridor and having to go through a warped version of the usual zen-like atmosphere of a Japanese garden. 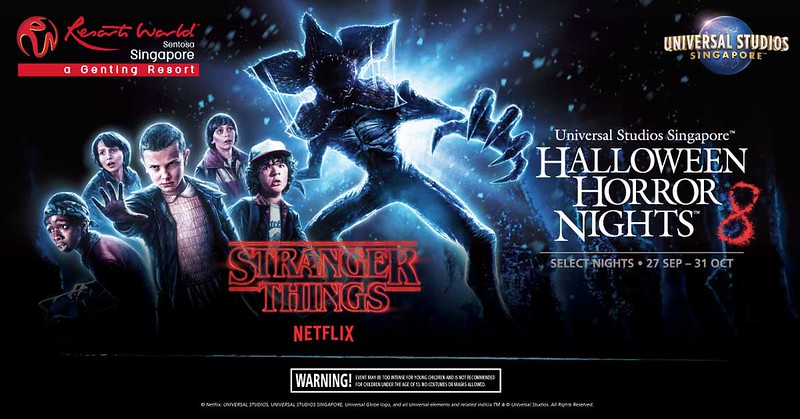 While it is probably the most visually elaborate set among the five, I did not enjoy the interpretation of Stranger Things as much. Perhaps it’s because I’ve never watched the popular netflix series or it could have been because the crowd moved at a snail pace during my time there, but I didn’t feel creeped out at all.

The main cast from the Stranger Things series are played by live actors in this haunted house. In total there are 12 scenes from the series that are enacted here. 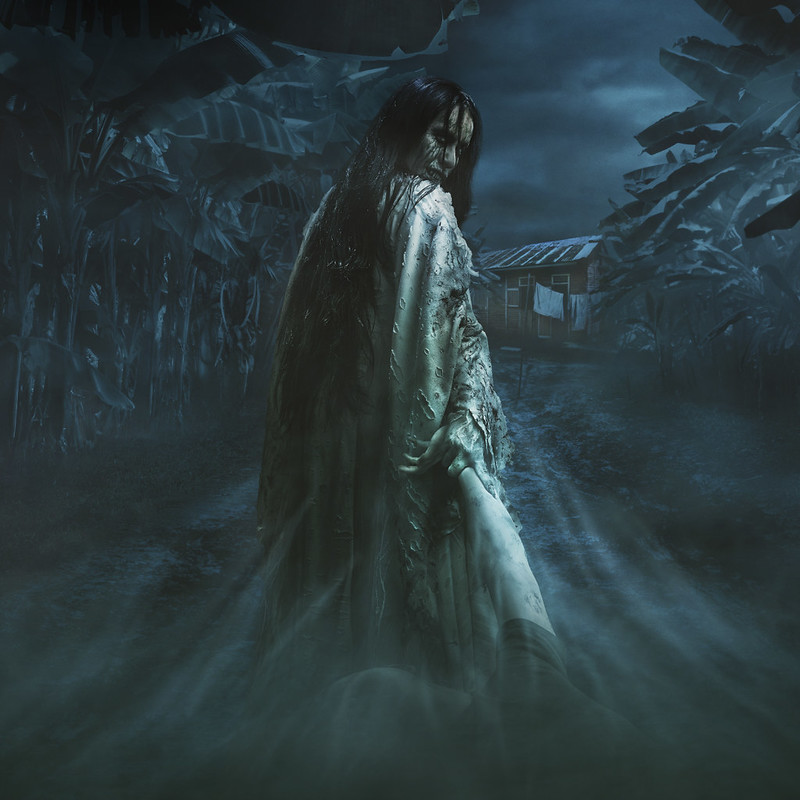 The pontianak has appeared in past episodes of Halloween Horror Nights in one way or another but this year this ghoul takes center stage with a haunted house of its own. Designed as a traditional Malay village gone haywire,

Another house that I found scary is the Pagoda of Peril which is based on Chinese folklore. Just seeing a creepy old temple replete with monsters in 19th century costume, incense sticks and scenes of torture was enough to keep my guard up. 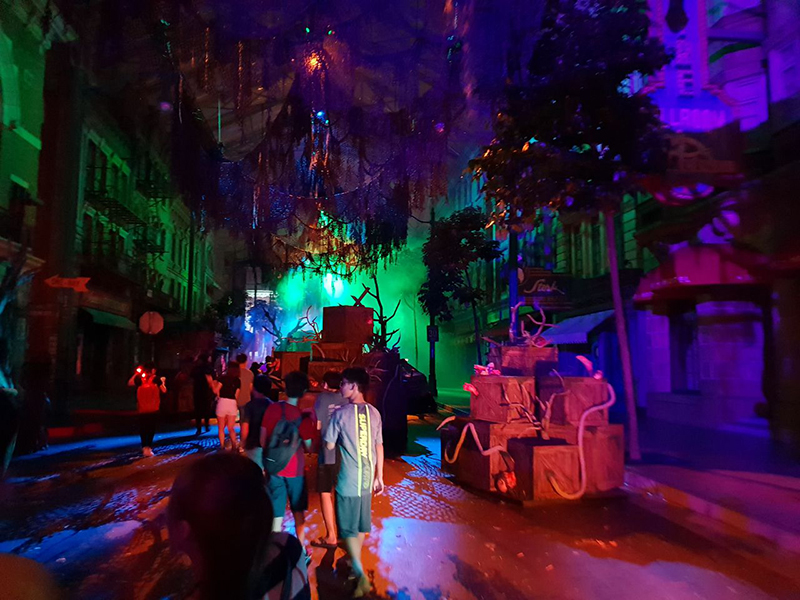 Apart from the five haunted houses, there are also two scare zones this year – Cannibal and Apocalypse Earth. The former is self-explanatory, with actors playing the roles of man-eating tribesmen. Passers-by can even glimpse upon people locked up in cages supposedly waiting to be devoured! The Apocalypse Earth on the other hand, is a highly atmospheric reenactment of a doomsday scenario. While zombies are probably the most popular way to show the apocalypse, it is portrayed here through the terrifying forces of nature. 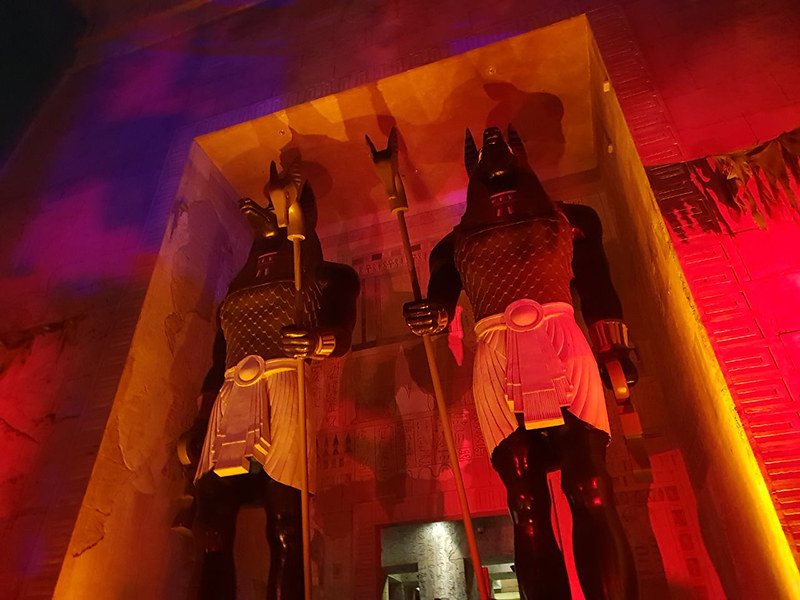 A couple of Universal Studios Singapore rides are also open during the Halloween Horror Nights and these include King Julien’s Beach Party Go-Round, Scared Shrekless, Enchanted Airways, Puss in Boots’ Giant Journey, Revenge of the Mummy, Accelerator, Transformers and the two Battlestar Galactica rollercoasters. As most guests were busy queuing at the haunted houses, I didn’t have to wait to get to the rides, even without making use of my express pass. I managed to do Revenge of the Mummy, Transformers and Enchanted Airways.

Even as a 30-something, the Halloween Horror Nights at Universal Studios Singapore still manages to impress. The level of detail in the production has no equal where scare houses in our little red dot is concerned. As someone who has been to this seasonal event the past few years, I love how Universal Studios Singapore manages to keep the concept fresh. The only thing I didn’t like so much is the long queue. I feel that the numbers need to be controlled in some way as it’s virtually difficult to complete all the houses plus rides in one evening without getting an express pass.

I booked my tickets to Halloween Horror Nights here