Many of Singapore’s old-school hawker centers in the city area were established to resettle pioneer hawkers that used to ply the streets of the older parts of town. One such hawker centre is Golden Mile Food Centre which was built in 1975 to resettle the original hawkers lining nearby Jalan Sultan. Today, Golden Mile Food Centre is a haven for those seeking traditional hawker fare such as claypot rice, grass jelly, chee cheong fun as well as more innovative dishes catered to younger folks. Here, I aim to present some of my favorite stalls.

Do note that Golden Mile Food Centre is a standalone hawker center that is different from the Golden Mile Complex at the opposite side of the road. 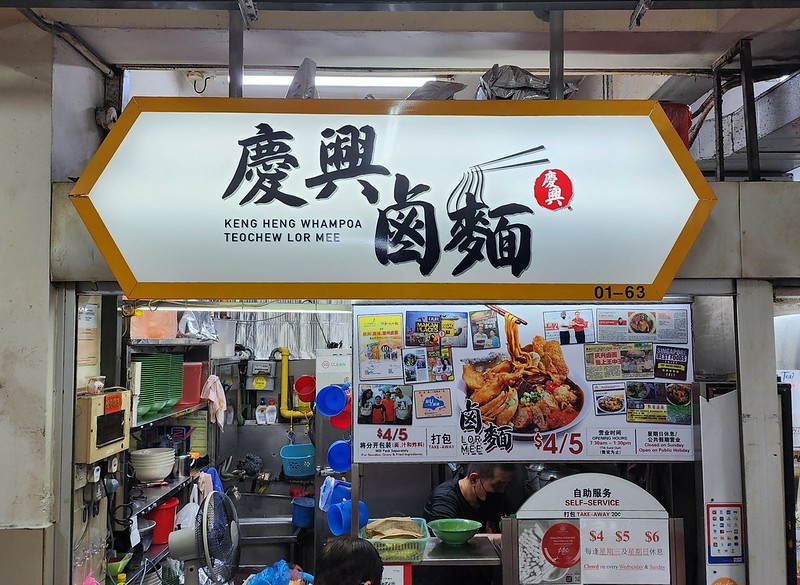 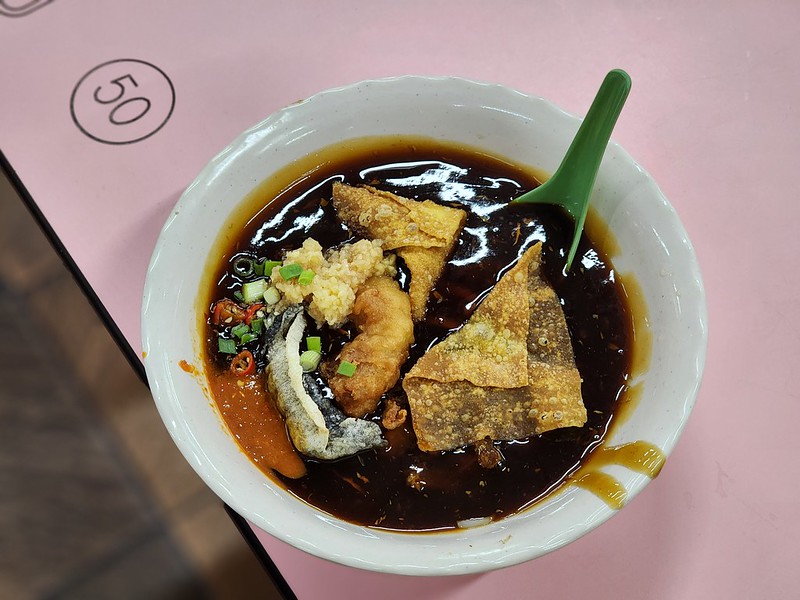 A contender for the most popular food stall in Golden Mile Food Centre, Keng Heng Whampoa Lor Mee offers piping hot bowls of reliably starchy and thick gravy lor mee at a good value, with bowls starting from S$4. I chanced upon the store one morning when the queue was not particularly long and ordered myself a mid-sized bowl (S$5). The serving size was huge and I can’t imagine what the large bowl (S$6) one might look like. It probably would have been good enough for two. My bowl came with relatively hefty portions (1 pc each) of ngoh hiang, pork belly, potstickers, fried fish, fish cake and even fish skin. The broth was notably thick and dark, one of the darkest I’ve seen for a bowl of lor mee. 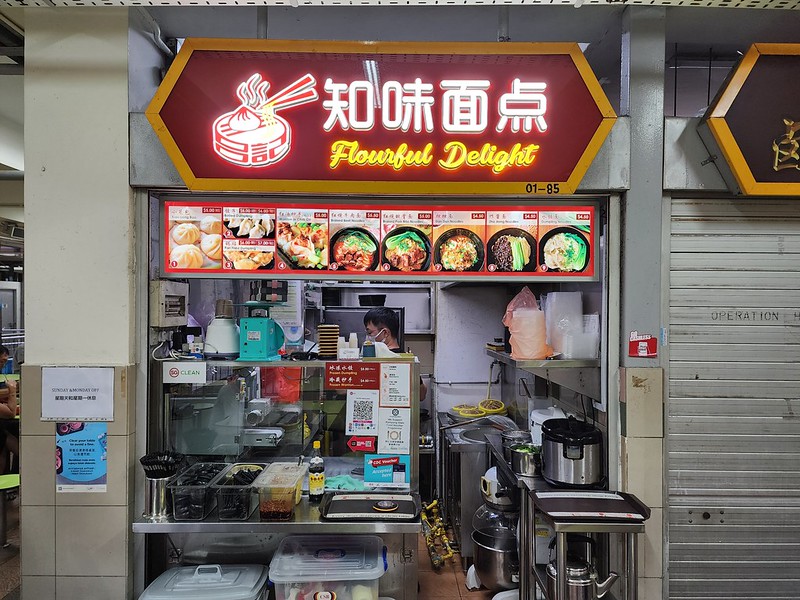 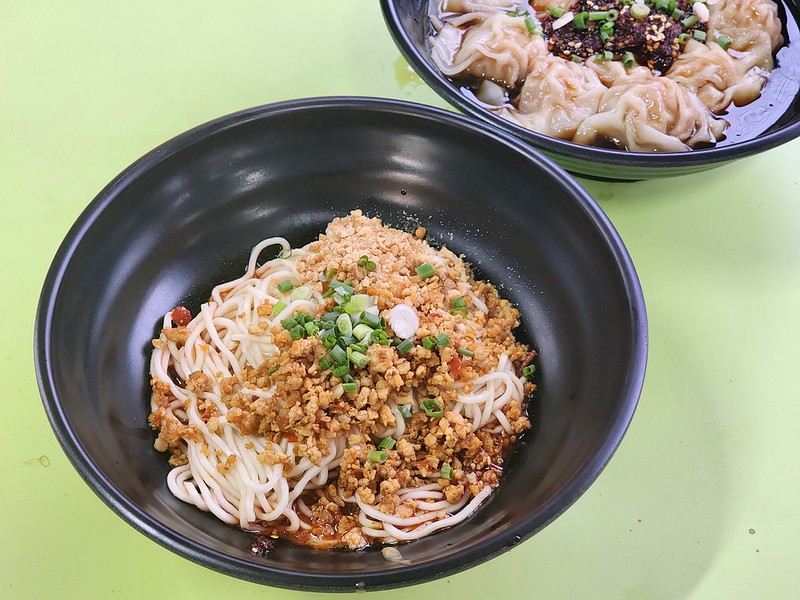 My go-to spot whenever I have cravings for Zha Jiang Noodles or Dan Dan Noodles, Flourful Delight makes their noodles inhouse and each strand is super chewy and bouncy. The flavor profile of the peanut sauce in the Dan Dan Noodles is especially prominent which makes it my go-to dish here. They are also known for their dumplings. I especially like their Spicy Sichuan Dumplings which are filled generously with ground meat.

Opening Hours: Daily except Mondays, 11AM to 2PM, 6PM to 8PM 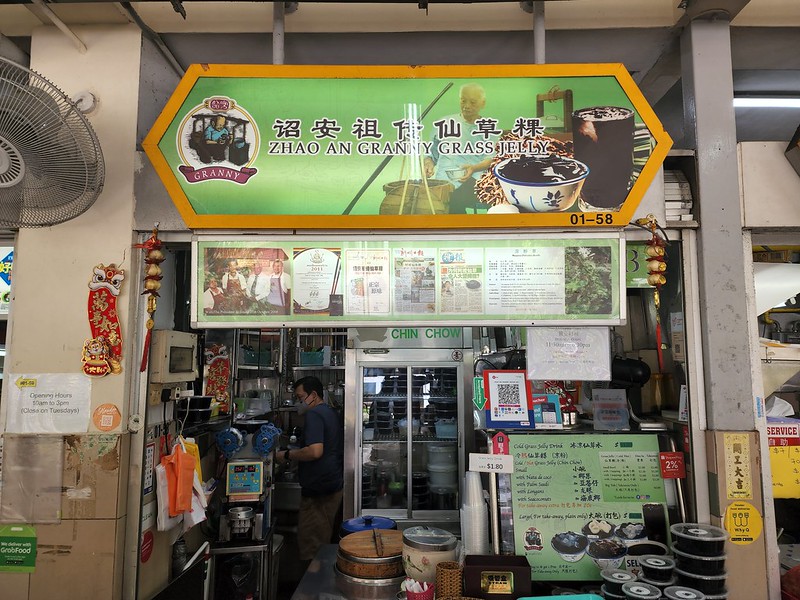 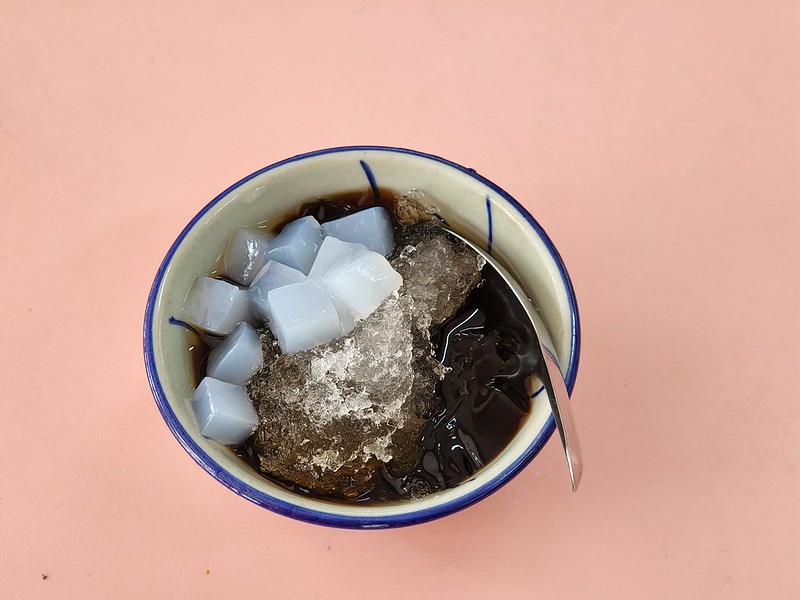 While grass jelly is a popular drink and dessert in most hawker centers, you won’t find another stall that specializes in this refreshing treat in the way that Zhao An Granny Grass Jelly does. The establishment has been around for decades. Customers have the option to top their grass jelly with nata de coco, sea coconut, attap seeds or longan. There’s a slight feeling of nostalgia here as each order is served in a traditional porcelain bowl. 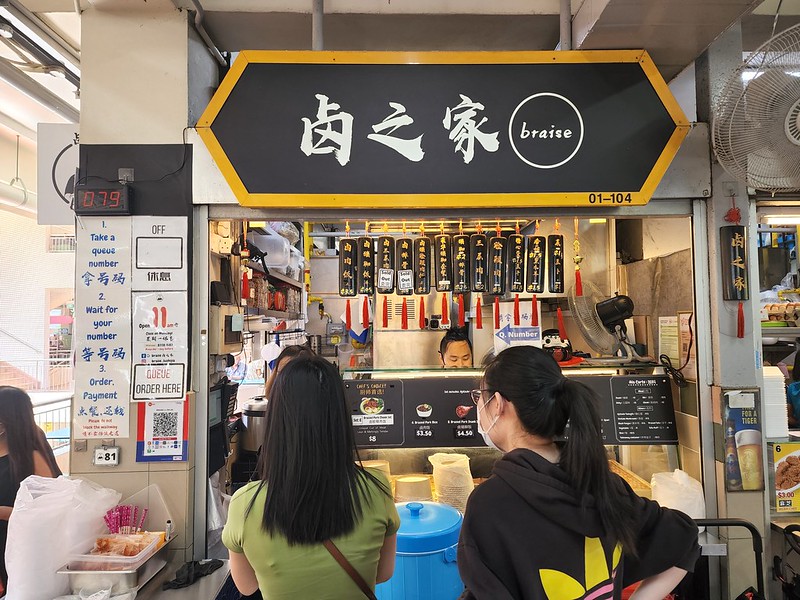 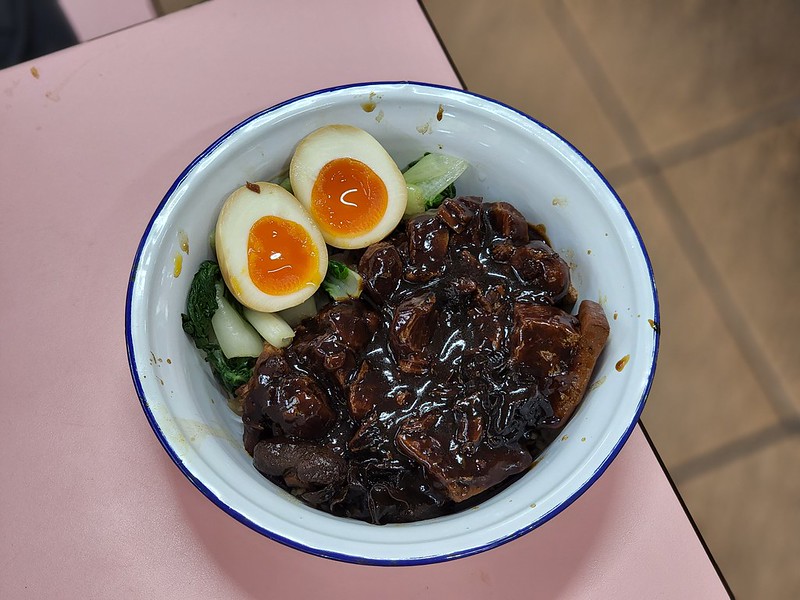 Opening Hours: Wednesday to Sunday, 11AM to 3PM 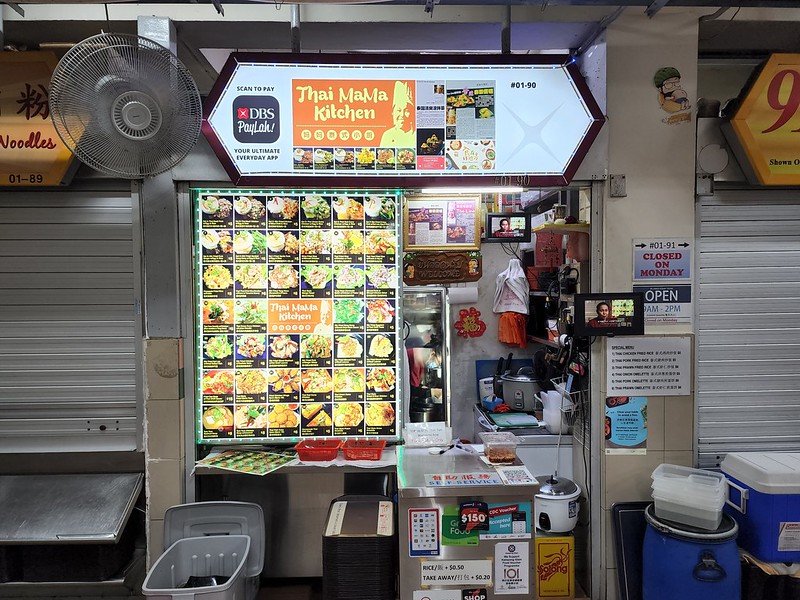 Thai Mama Kitchen is the stall to turn to for reliable and affordable Thai fare. What sets them apart from the other Thai stalls in Golden Mile Food Centre is the sheer number of dishes they have. Choose among their range of curries or staples like tom yum and pad thai. My favorite dish to order here is the Garlic Pork Rice which always comes reliably crunchy. 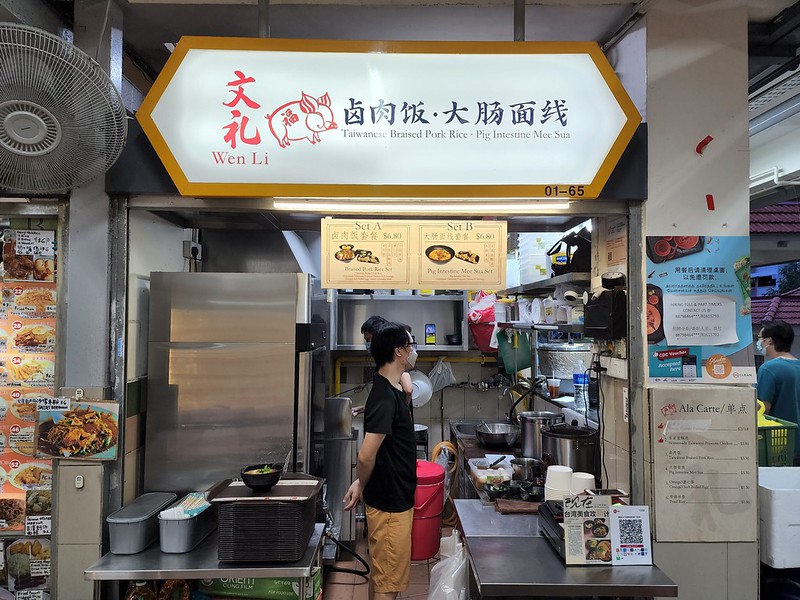 The Taiwanese atmosphere is palpable the moment one approaches the stall to order. The guy running Wen Li speaks with a palpable Taiwanese accent (I was to learn later that he is actually from Malaysia). One can expect affordable Taiwan staples here including Braised Pork Rice, Popcorn Chicken, Pig Intestine Mee Sua and more. Customers can also order the dishes as a set with either the Braised Pork Rice or the Mee Sua as the main followed by a couple of sides. I ordered their Braised Pork Rice and noted that it was on the leaner side, just the way I like it.

Opening Hours: Daily except Monday, 11AM to 8PM 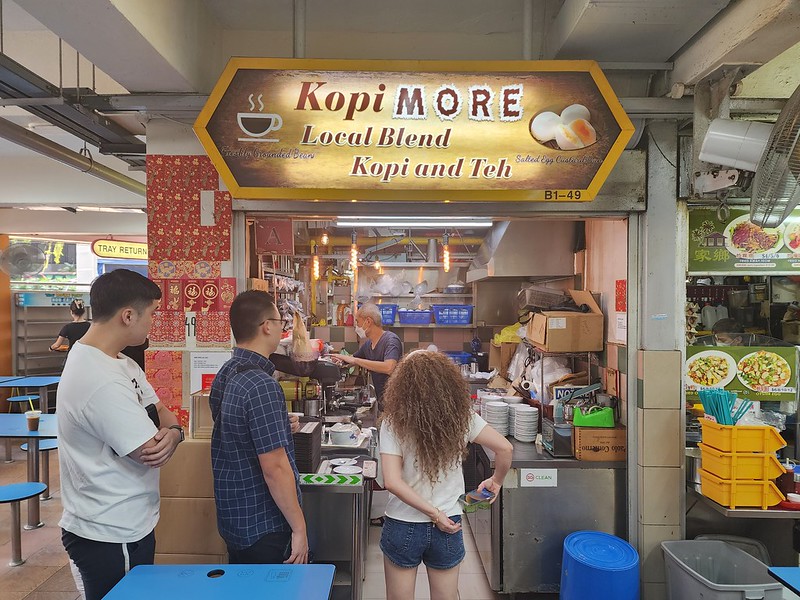 Although it opens relatively late for a coffee / drinks stall, Kopi More never fails to attract quite a queue in the few hours that it is open each day. The uncle who runs the stall sells local kopi made using western techniques. This includes grinding the beans and preparing each cup using a barista coffee machine. The drinks menu is a simple one with a selection consisting of kopi/kopi o, teh/teh o and yin yang. The stall counts some celebrities as its loyal customers including Chen Yixi and Henry Golding. Compared to typical local kopi stalls, the price here is roughly double though still lower than what barista-style coffee places charge. At the time of my visit, my cup of kopi o was priced at S$2.40. Having gone thru an espresso machine, my kopi o had a noticeable layer of froth on top and brownish hue.

Opening Hours: Daily except Monday, 11AM to 4PM 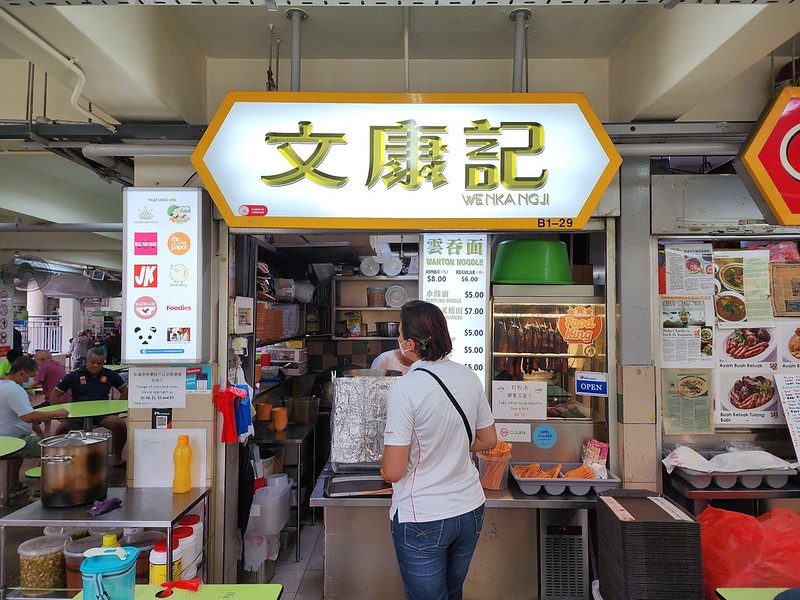 Located deep within a corner in the basement of Golden Mile Food Centre, Wen Kang Ji serves excellent Wanton Noodles. The highlight in each plate are the well-caramelized char siew – plump and generous in serving. The wantons that comes in the accompanying soup are also filled with good portions of meat, prawns and black fungus. They have attracted quite a following despite being one of the newer establishments in Golden Mile Food Centre, opening a second outlet in Joo Chiat.

Opening Hours: Daily except Tuesday. 9AM to 5PM 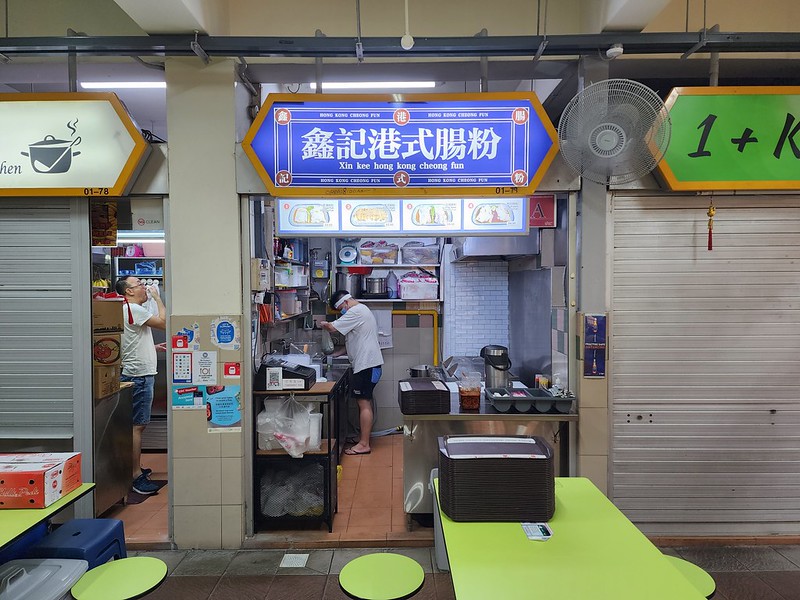 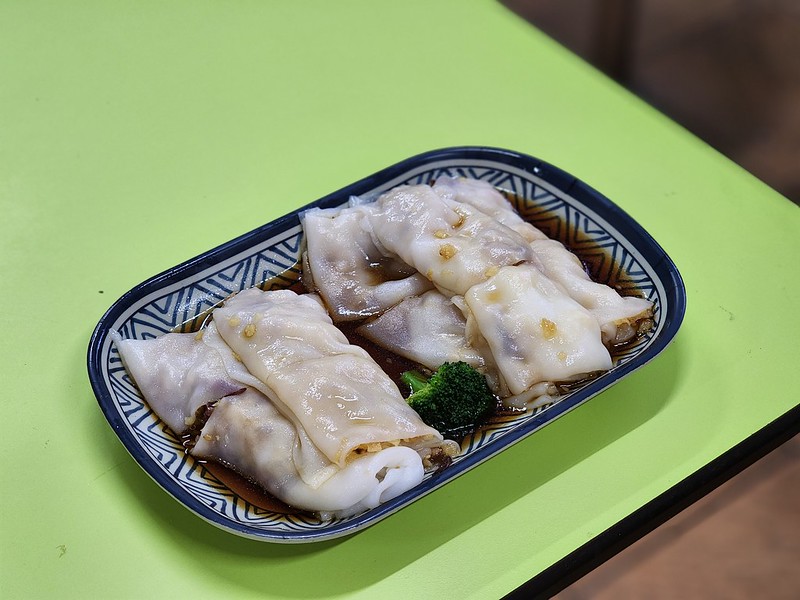 This relatively new stall in Golden Mile Food Centre was opened during the second half of 2022. Chee cheong fun lovers can rejoice in these breakfast staples – all made-to-order in an affordable setting. Their chee cheong fun is made Cantonese style, with thin and slippery rice rolls enveloping fillings such as chye poh, prawns and pork char siew. The Chye Poh Chee Cheong Fun intrigued me in particular as one doesn’t usually see this flavor elsewhere. The paper thin rolls easily disintegrated with just one bite while the amount of chye poh within was just enough to be quite perceptible in flavor.

Opening Hours: Daily 8AM to 3PM 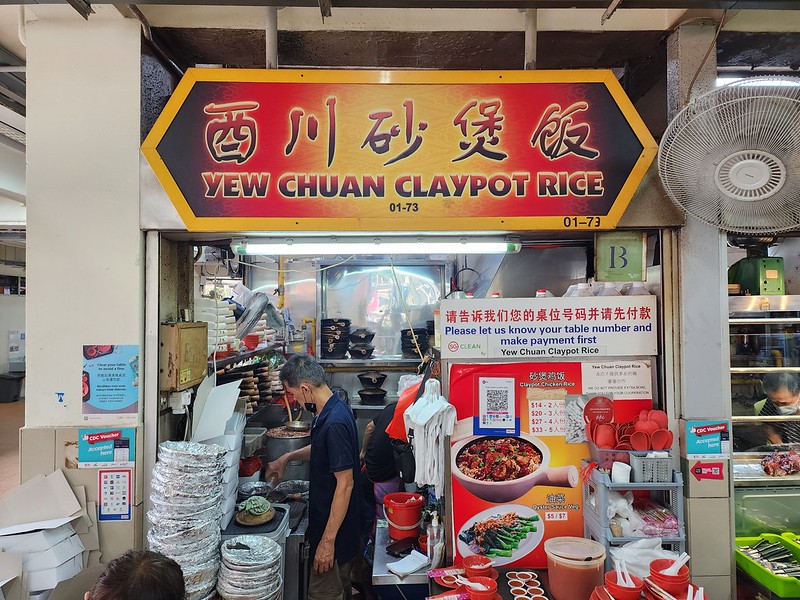 Yew Chuan Claypot Rice is perhaps the most well-known stall in Golden Mile Food Centre and comes with the longest wait as well. Their main dish is the Claypot Chicken Rice which is sold in a variety of sizes. Do note that when it’s busy (usually at night), they don’t serve the solo sized portion. The claypot rice comes fragrant with the right amount of char, pork sausage (lup cheong), liver sausage, generous portions of chicken as well as salted fish. Diners are given a sauce dispenser as well so one can opt to put as much (or as little) of the sauce as desired. I have had varying experiences during my visits here. The wait tends to be long during dinner time and the guy taking orders can be quite grumpy on occasion. However, the claypot rice is consistently good throughout all my visits.

Opening Hours: Daily except Monday and Thurday, 12PM to 8PM (until 8:30PM on Saturdays) 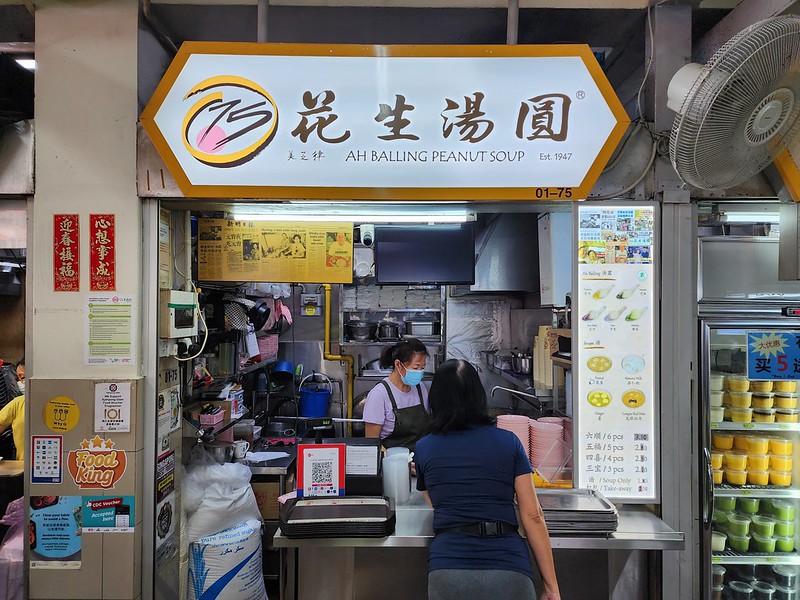 One of the oldest stalls to operate in Golden Mile Food Centre, 75 Ah Balling Peanut Soup is run by 3rd generation hawkers. This is perhaps the most well-known establishment specializing in glutinous rice balls or tang yuan in Singapore. While they no longer make their rice balls inhouse (production is done in a factory for consistency), the establishment attracts a loyal following due to their myriad of flavors including peanut, black sesame, red bean, yam and matcha. I usually get my desserts here whenever I am dining in Golden Mile. Although I find the taste and texture similar to the tang yuan you can buy from the supermarket, I enjoy trying their more unusual flavors such as the matcha which comes naturally bitter. They still make some of the soups inhouse and diners can choose between peanut soup (their signature), almond milk, ginger and longan red date. 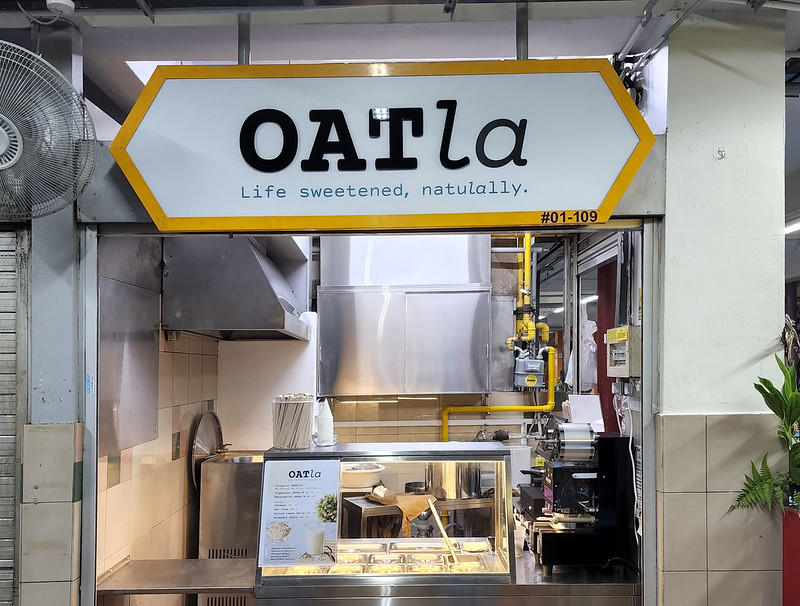 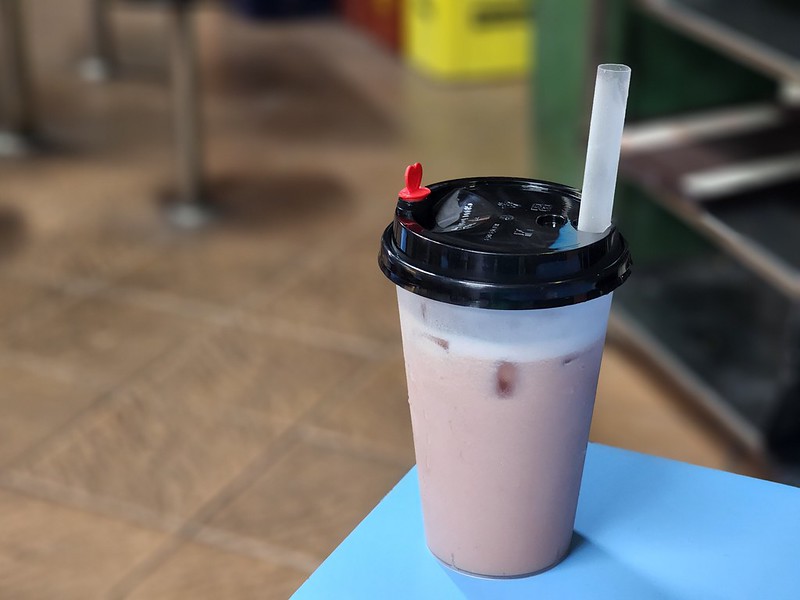 Oatla is quite a novel concept to open in Golden Mile Food Centre in 2022. The drinks menu feature oat-based drinks with the stall owner making his own oat milk concoction rather than using the usual carton oat milk. They pride themselves in their oat milk with no sugar added and reflected through signature drinks such as their Original Oatmilk and Watermelon Oatmilk. I’ve tried their oat milk myself and found it naturally sweet which was pleasantly surprising due to their “no added sugar” promise. I also like how their oat milk is more watery than the ones you can find in the supermarkets – indicating the lack of unhealthy vegetable oil that’s typically added in those carton oat milks for viscosity.