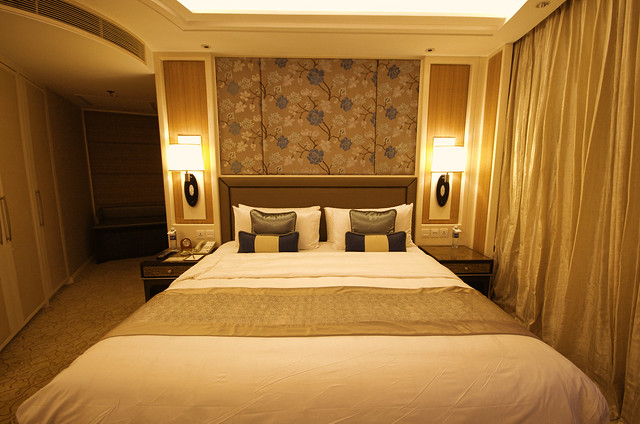 For over twenty years, the EDSA Shangri-la Manila has been a formidable force among Manila’s luxury hotels. Since it opened its doors in 1992 as the first Shangri-la hotel in the Philippines, this property has become an institution, and has often been cited by respected travel publications as one of Manila’s best hotels. In fact, Edsa Shangri-la traces its origins to the rise of Ortigas Center as an alternative to the Makati CBD. SM Megamall and Shangri-la Plaza had both opened for just about a year when the Ortigas Center’s first luxury hotel was completed. Personally, this hotel was my introduction to the Shangri-la brand. It was the first Shangri-la property that I stepped foot in when I was a kid attending wedding parties!

Little did I imagine that some 20-odd years later, I would find myself staying in EDSA Shangri-la Manila. Just last week, I was hosted by the hotel for a weekend stay, to experience a classic EDSA Shangri-la Manila staycation. Ever since the hotel opened, it has appealed massively due to its appealing promotions for hotel rooms and special rates for locals. During weekends, it’s common to find families lounging about in the pool area. I wouldn’t be surprised if more locals actually stay in this hotel than foreigners. 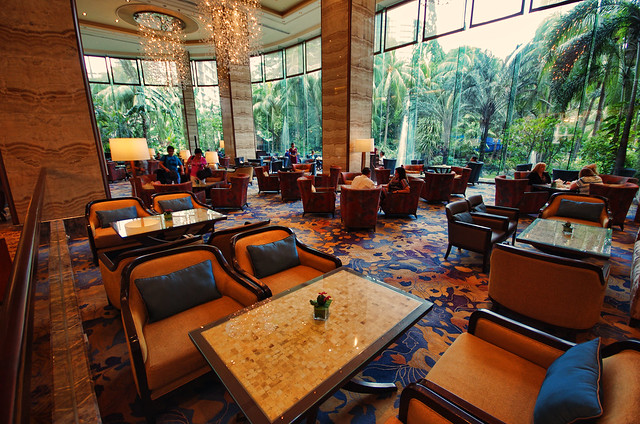 The hotel is at the tail-end of a massive renovation project at its flagship Tower Wing. During my stay, I could still see traces of this, as the main lobby was still being spruced up. Check-in was a breeze. I arrived in the late afternoon and there was no queue. As with my experience with Shangri-la hotels elsewhere, I was personally shown to the room by the front desk staff. 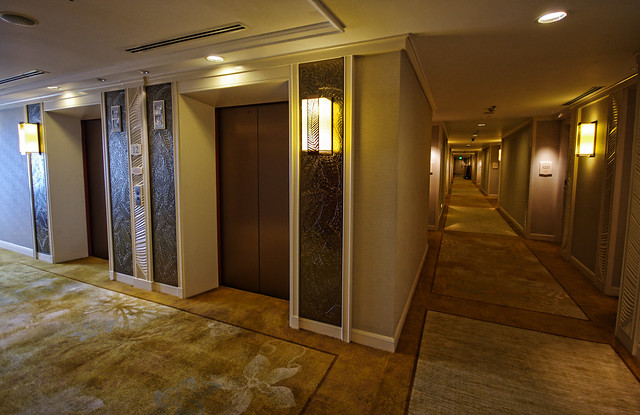 The renovation on the Tower Wing has given the room corridors a semi-resort type of feel. Unlike what is usually seen in most luxury hotels, the corridors are brightly lit and the walls are painted in warm colors. The carpets, wall and lighting fixures are dominated by floral and palm motifs. Newspapers are also conveniently placed by the lift lobby of each floor for guest consumption. 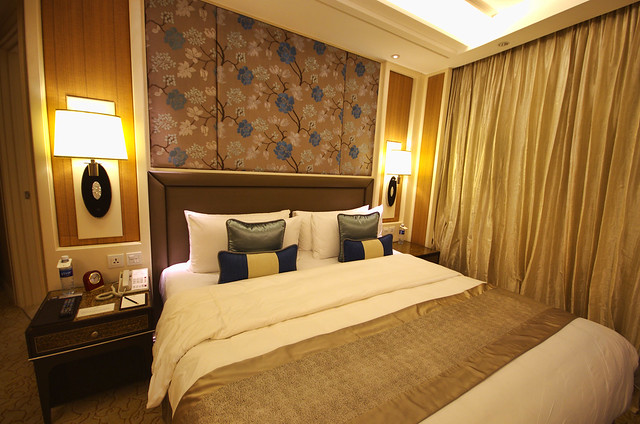 The room that I was shown to was the Tower Premier Room and it was one of just 25 such rooms in the hotel. At 46 square meters, my room was a notch above the Deluxe Rooms of the Tower Wing. As it was also a corner room, the shape was slightly curved and had a fantastic panoramic view of the Ortigas skyline. The room’s overall look was predominantly European, marked by the blue pillows and warm lighting. Gone are the previous oriental touches, originally driven by the inspiration behind the hotel’s branding. 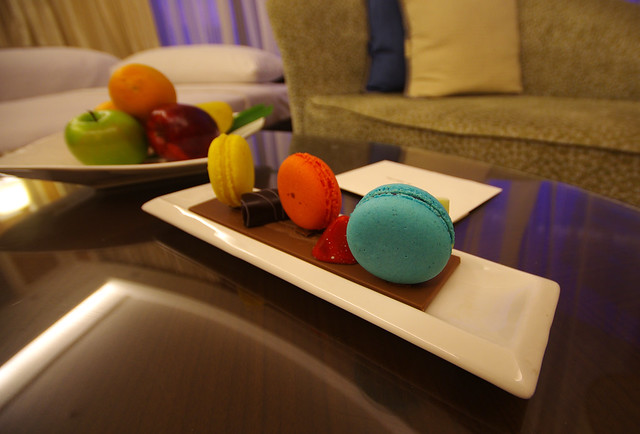 When I entered, I found a note from the hotel’s general manager, a fruit plate and some macarons. If there’s anything that highlights the overall lightness and European feel of the room, the plate of macarons simply brings this point home. 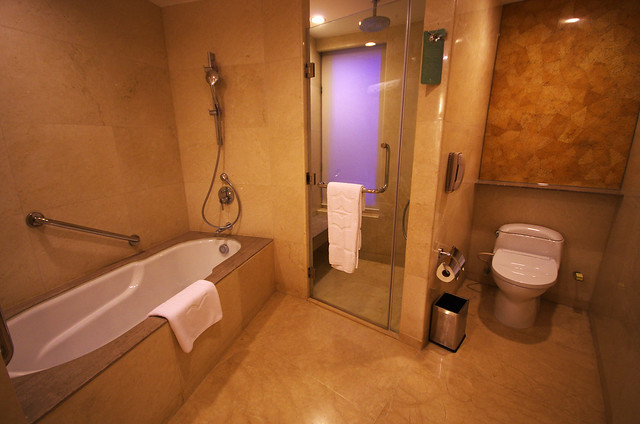 The bathroom had all the trademarks of a Shangri-la hotel. Marbled floor and walls, separate bath and shower areas with rainshower, and copious amounts of in-house branded toiletries and amenities. There was also a set of speakers installed in the bathroom that connected to the television in the room, making sure guests don’t miss out on whatever they’re watching during their pee breaks. 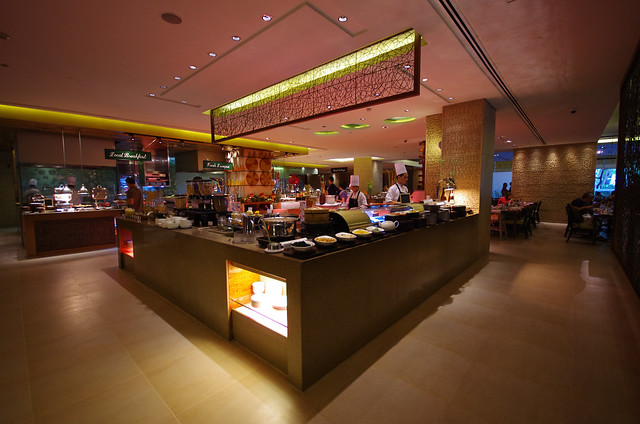 My stay came with breakfast buffet served at the all-day dining restaurant, Heat. As is the case with the breakfast offerings in Shangri-la hotels, the buffet spread here was as diverse as the hotel’s guest list and included Filipino, European, American, Indian, Japanese and Chinese fare. I especially liked the Filipino corner which was particularly extensive and featured classic favorites such as longanisa, tocino, pork adobo and even pastries such as sapin-sapin and puto. The smoothies selection here which are made of fresh fruits is also highly recommended for a healthy start to the day. 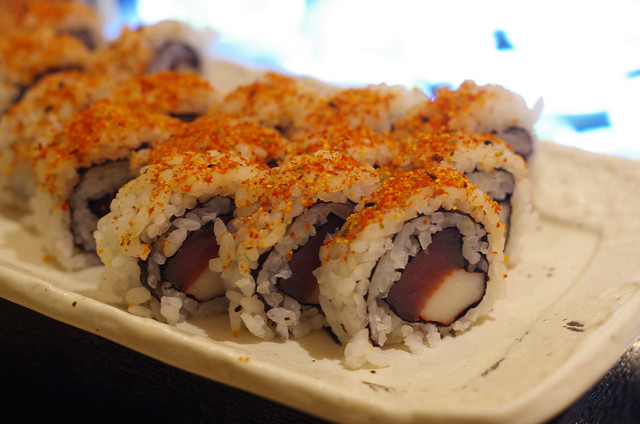 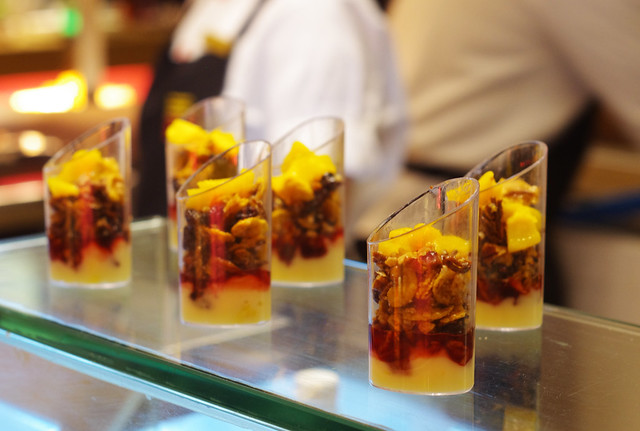 Those with a sweet tooth will be pleased to find a waffle station here, manned by cheerful staff who are flexible in preparing waffles or crepes to guest desires. I had mine with a most unusual pineapple sorbet!

Aside from Heat, the hotel has a few other well-known restaurants catering to various cuisines. These include the Japanese restaurant, Senju; Italian fine-dining, Paparazzi; and for Cantonese lauriats, Summer Palace. I tried the set dinner and dimsum menu at Summer Palace, which warrants a separate post. 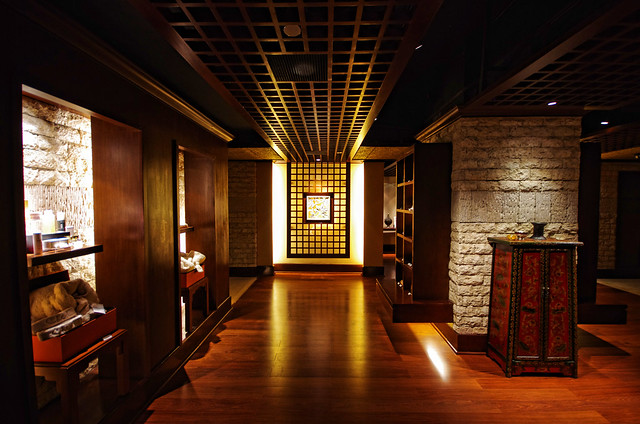 I had a taste of the “Philippine hilot” at Shangri-la’s trademark Chi spa during my stay, an authentic massage focusing on ancient methods passed down through generations of Filipino culture. Before the massage, I was given a serving of piping hot ginger tea to soothe the nerves. Afterwards, the masseuse greeted me at the waiting area and showed me to the locker and shower area. The massage started promptly afterwards, with the whole procedure lasting about an hour. It was a welcome respite to have this towards the end of a very hectic week. I was deeply relaxed by the end of the hilot. 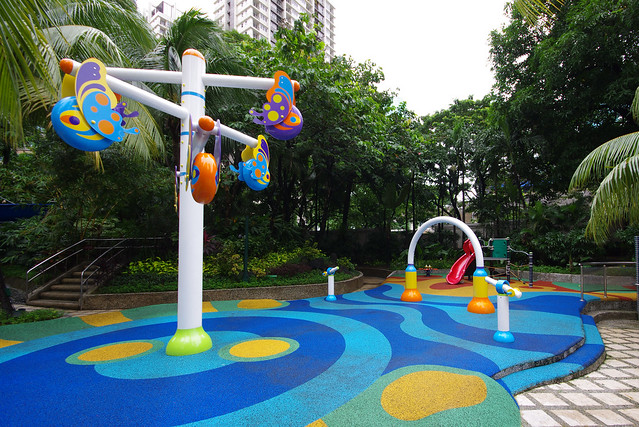 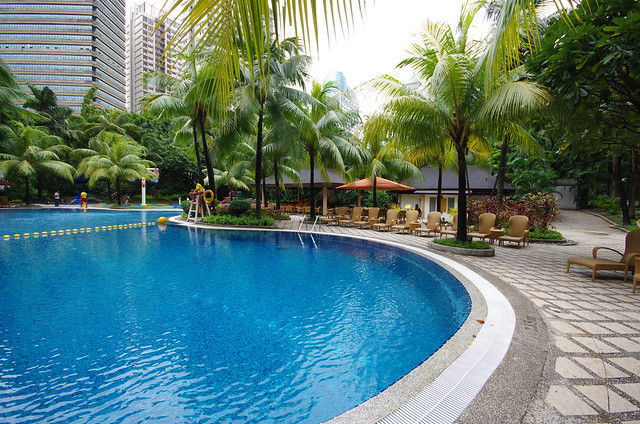 EDSA Shangri-la places heavy emphasis on being child-friendly, especially in the pool and recreational areas. There is a dedicated playground of sorts right next to the pool, not to mention a water slide that will appeal to kids (and kids at heart), I’m sure. During the weekend, I could also see dedicated staff distributing cookies and juice to kids all over the hotel.

It’s little wonder that EDSA Shangri-la is such a popular staycation hotel in Manila. In a frenzied metropolis such as the Philippine capital, this hotel offers an oasis of sorts – being tops in lodging, F&B and service. Recently spruced up malls such as Shangri-la Plaza and SM Megamall are also just next door for those looking for the best of both worlds. Many new hotels have moved in to the Ortigas area since EDSA Shangri-la opened more than 20 years ago but it remains to be the preeminent hotel in the district, a distinction that is reinforced by its multi-million dollar refurbishment. I had a relaxing time at EDSA Shangri-la and the garden resort atmosphere put me in a state of mind that I never expected to receive from what I initially perceived to be a strictly business hotel. This being said, the hotel knows how to put on its business hotel hat when the week starts, with a transformation that is at once palpable as it is subtle – I witnessed this transformation in reverse when I stayed on a Friday up to Sunday.

Tips for enjoying a staycation in EDSA Shangri-la Manila

1. Go for the newer Tower Wing to maximize that resort feel

2. The hotel’s restaurants have been widely cited as being some of the best in the country for their respective cuisines. Try one out during your stay.

3. Try to avoid peak weekends or days – this includes Holy Week and weekends that coincide with holidays. For weekend stays, a Friday-Saturday stay is less hectic than a Saturday-Sunday stay.

4. If your stay comes with breakfast at Heat, try to have it early at around 8AM or before especially during Sundays. For all other days, the timing isn’t that important – you can come as late as you want but do note breakfast is only until 10:30AM.

I was hosted by EDSA Shangri-la Manila during my stay. However, all opinions are my own.