Refurbished in 2015, the British Airways Lounge in Singapore Changi Airport Terminal 1 has always piqued my curiosity. It’s located along the same stretch as the Qantas Singapore Lounge, the SATS Premier Lounge and the Thai Airways Lounge and while these lounges look more subdued from the outside, the BA Lounge demands attention with the sparkling blue decor that is visible from the glass door.

The opportunity to use it has always eluded me. While I love traveling to Europe; I have for no apparent reason than the desire to explore new cities left off London from my recent trips so I have to say that until now, I’ve never flown with BA. That only leaves the other Oneworld carriers but Qatar Airways (which I love) is in T3 and I tend to take the evening flight to Doha after work which leaves me with little time to go to the other terminals. Cathay Pacific is in T4, a terminal not connected to the rest. 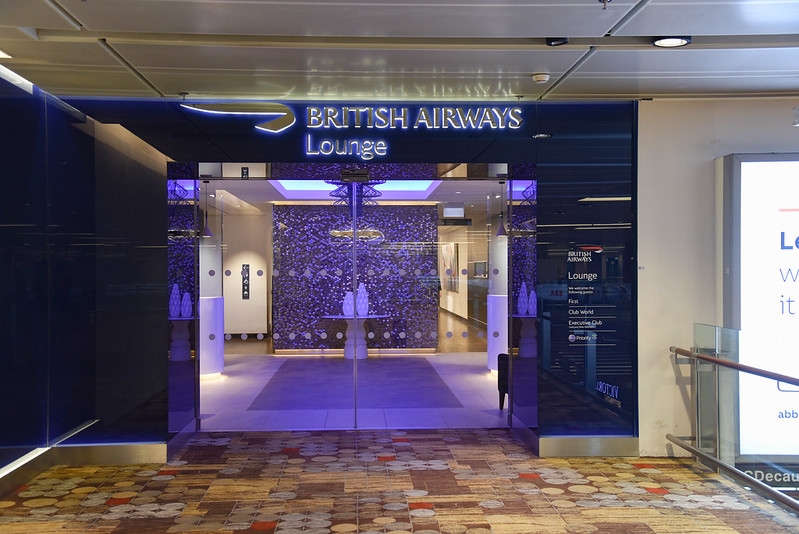 Finally, the opportunity came during my first class flight with Qantas. Don’t get me wrong, Qantas has a solid lounge in Terminal 1 and the made-to-order food concept is hard to beat but the British Airways Lounge is just next door. Since both are Oneworld alliance members, it’s worthwhile to check both out. 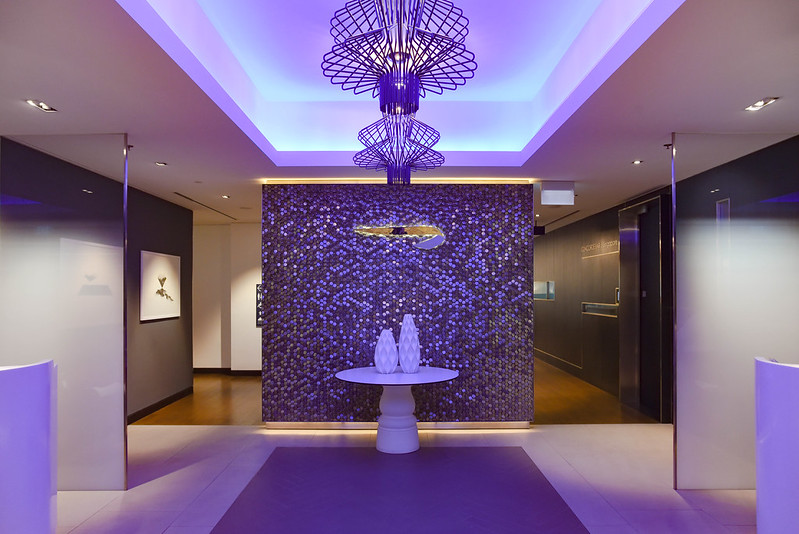 The British Airways Lounge in Changi Airport opens at 3PM and closes at around 11PM when the last BA flight departs. I arrived at around 4PM to find myself being one of only two passengers inside the 220+ capacity lounge. Having been used to lounges that were full to the brim, I found the serenity to be a big plus. 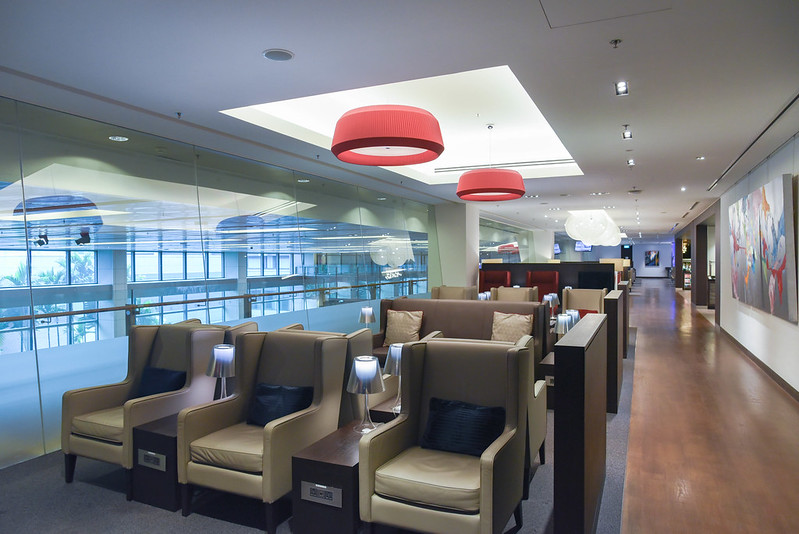 The interiors are stunning and if that were to be the sole measure of a good lounge, the British Airways Lounge just might be the most appealing one in Changi Airport. There are plenty of artworks on display by both British and Singaporean artists. The color scheme is a mix of both earthy and bold colors. Beige is the predominant color but you’ll also find portions in red and blue. 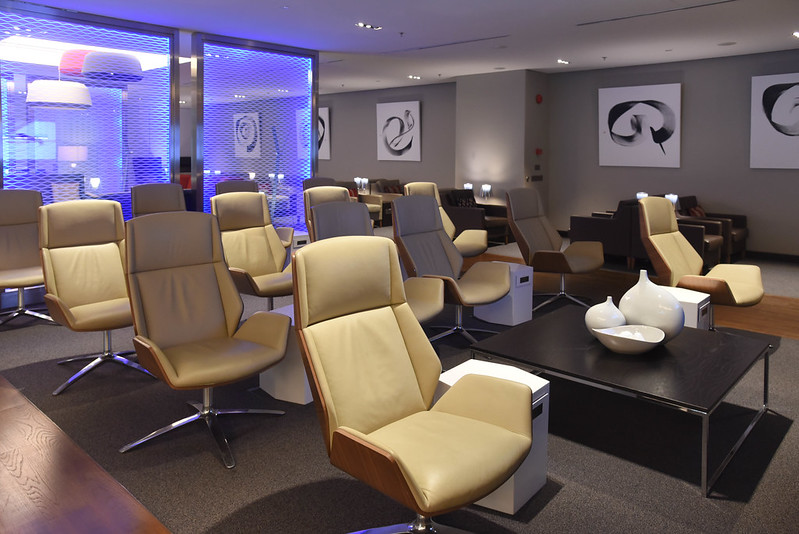 There are a variety of seating options available and the British Airways Lounge is superior in this aspect. Armchairs of various shapes and sizes suit those looking to just sit and perhaps enjoy a drink or two while catching up on the latest news before their flight. These come with a divider fitted with power and USB outlets plus a table lamp. 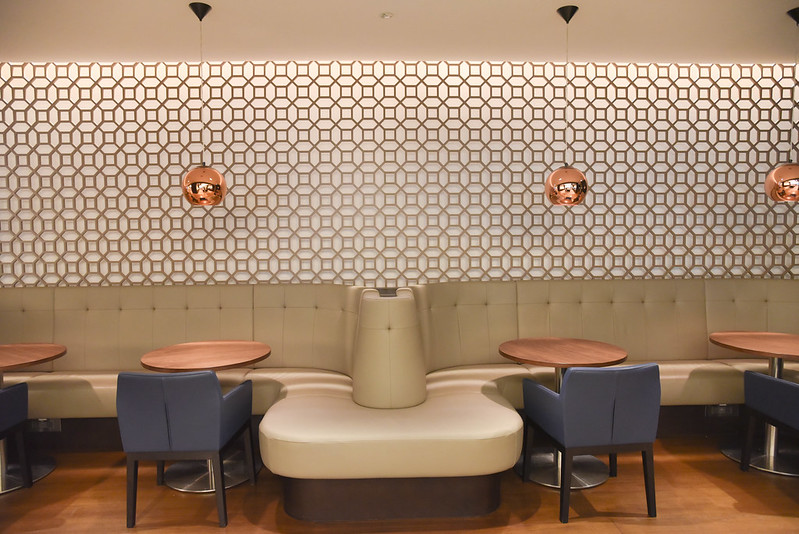 There is also a nifty booth style seating area at the other side of the lounge. I love the design of the furnishing which is curved in contrast to the more boxy setup of traditional booth seating. 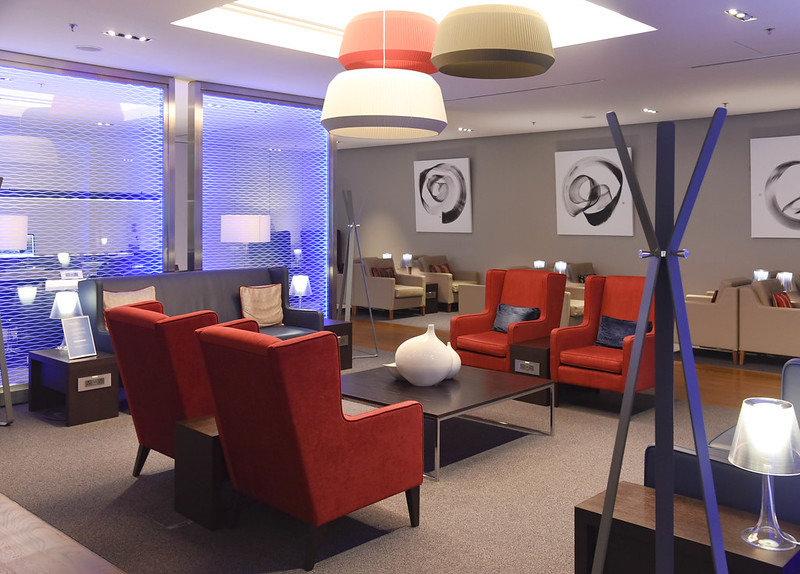 Parts of the lounge look akin to the living room of a fancy apartment. With the sheer number of seats available, I doubt the place ever gets full. 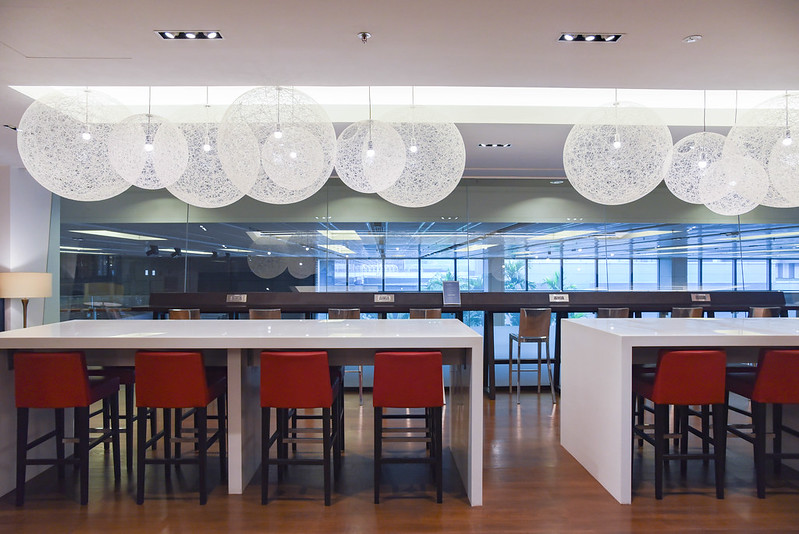 In my view, the most visually appealing of all the seating formats is the communal counter-top seating. I thought the lights enclosed in large spheres hanging from the ceiling were absolutely stunning. 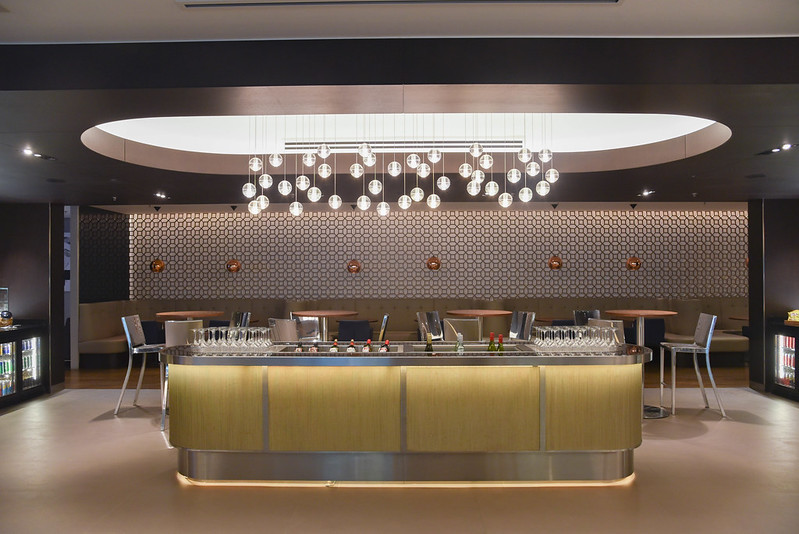 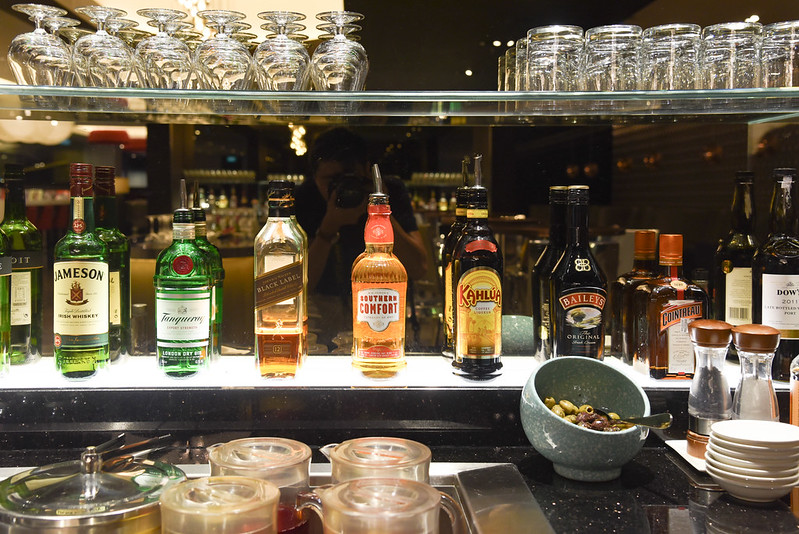 Just across that communal table is what BA describes as its signature champagne bar. I tried to look through every nook and cranny and while there were plenty of different wines, liqueurs and spirits available; I could not find a single bottle of champagne over there. Perhaps it’s upon request. Nevertheless, the bar looked stunning as well and the way the bottles were displayed at either side of the bar gave the area a somewhat dreamy effect. Apart from this watering hole, first class passengers also get access to the Concorde Room which is tucked away near the entrance of the lounge. It is accessible only through a passcode. 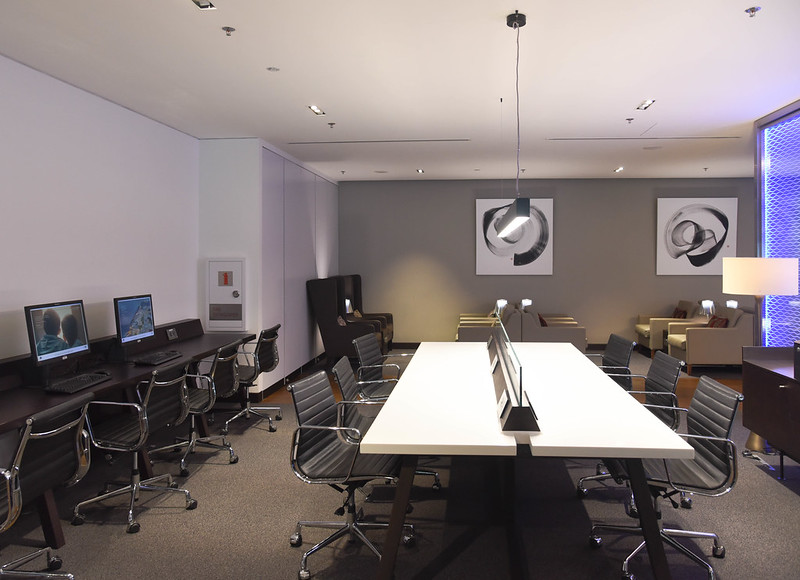 At the far end of the lounge is a communal workstation plus a couple of computers from where passengers can surf and perhaps print some documents. 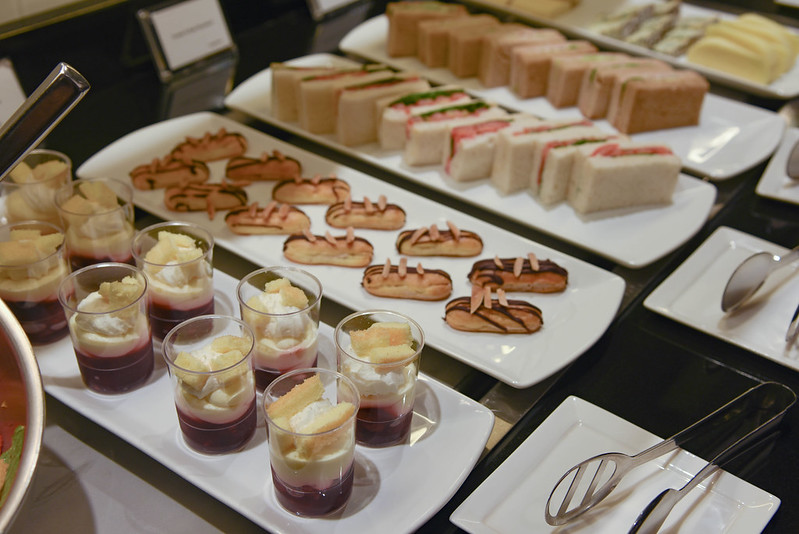 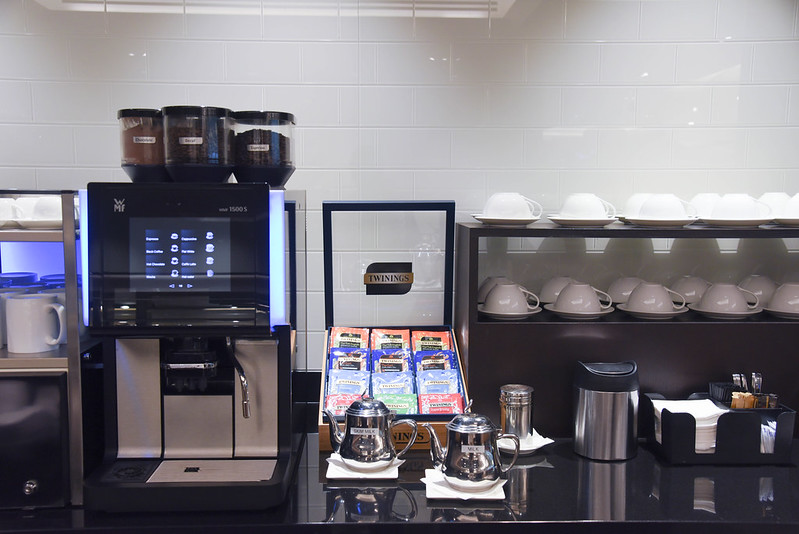 As I was there at around 4pm, the only food available were desserts, sandwiches and some nuts. Juices, coffee and tea (from Twinings) were also available. I was told the buffet starts at 5pm. 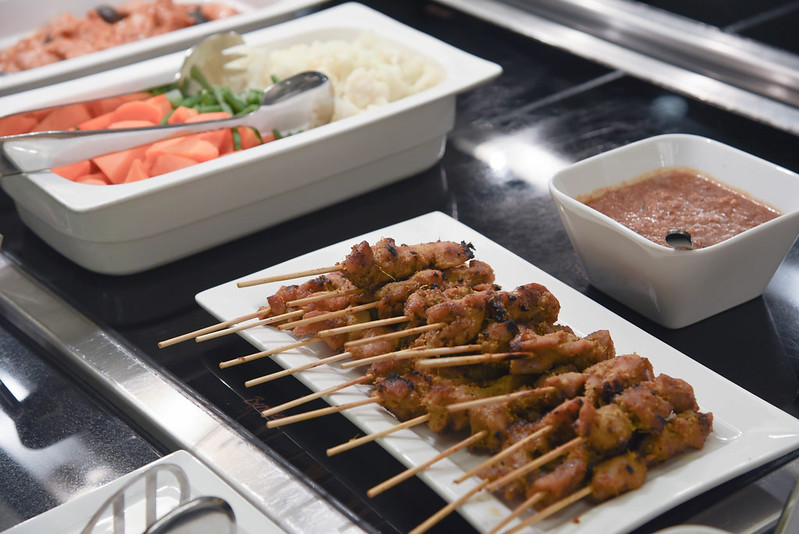 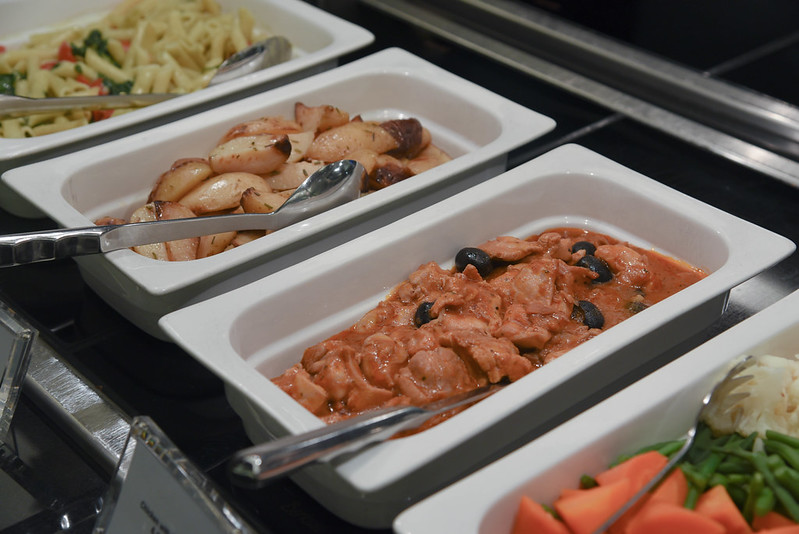 Indeed, at around 5pm, the buffet table was starting to get filled. In total, there were around five dishes and soup. At the time of my visit, there was satay, chicken stew, pasta, potato wedges and mixed vegetables. There’s also a modest salad and cheese section while the desserts section was upgraded with a fruit platter on top of the cakes and puddings I saw earlier. Overall, I thought it was in line with what the usual lounges offered in terms of variety. 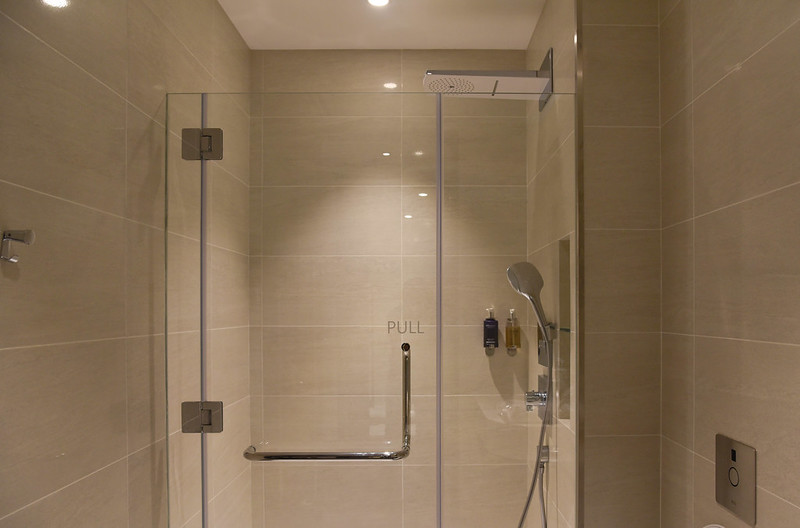 I wasn’t really looking to shower as I came from home but I went to check out the shower facilities. Each “suite” (there are around 6 or 7) came with a sink and its own toilet, roughly similar in size to the ones I’ve seen in the SilverKris Lounge but a tad smaller than the ones in the Qantas Singapore Lounge. Toiletries come from Elemis.

Overall, I loved the refurbished British Airways Lounge in Changi Airport. The peace and quiet situation is definitely better here than the lounges surrounding it (at least that’s what I could see when I was there from 4pm to 7pm) while the ambiance is a step up even when compared to other other venues. This lounge has been around for nearly three years now but everything seemed brand new. Finally, the food and drink selection is quite decent too and while you won’t find the artisanal coffee, made-to-order cocktails and special menus from the neighboring Qantas Singapore Lounge (can’t really compare because the Qantas Lounge is managed by Accor Hotels); I still find BA’s offerings to be a step up from other prominent airport lounges like the SilverKris Lounge.