Ayutthaya or Sukhothai? I had the same question myself when I was planning my past trip to Thailand. These two ancient Thai cities, remnants of former capitals, are about 350 kilometers apart. Both are UNESCO World Heritage Sites and are said to be must-sees in Thailand especially if you like ancient Buddhist temple ruins. If you have time for only one, as I had during my earlier trip to Thailand, which one should you choose? Here are some comparative points to to help you decide.

Located some 80 kilometers from central Bangkok, the former Siamese capital city of Phra Nakhon Si Ayutthaya is home to Ayutthaya Historical Park. But don’t be fooled by the designation, the park actually consists of dozens if not hundreds of ruins scattered all over, and in some cases, beyond an island enclosure. For a time during the 17th to 18th centuries, Ayutthaya was a major trading hub and was one of the largest cities in the world. This ended in 1767 when the Burmese invaded Ayutthaya and almost destroyed the city. 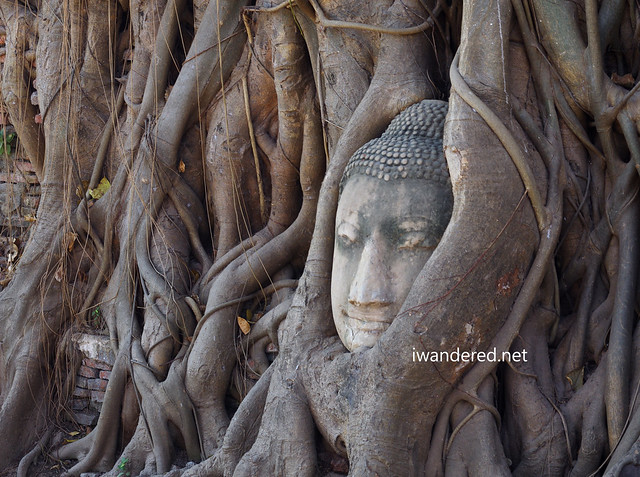 Today, many of the old buildings in Ayutthaya are still standing, albeit in ruins, and the greatest concentration of this is in the island enclosure. The mainland, which it is connected to via a bridge, also features some outstanding temples such as Wat Chaiwatthanaram and Wat Yai Chai Mongkon.

Where I stayed in Ayuthaya: I stayed at Iudia on the River which is a wonderful boutique resort-like property within a short distance away from the temples. One key amenity they had was free bike rentals. I liked it for its unique rooms and chill atmosphere. You can also book this boutique hotel here. 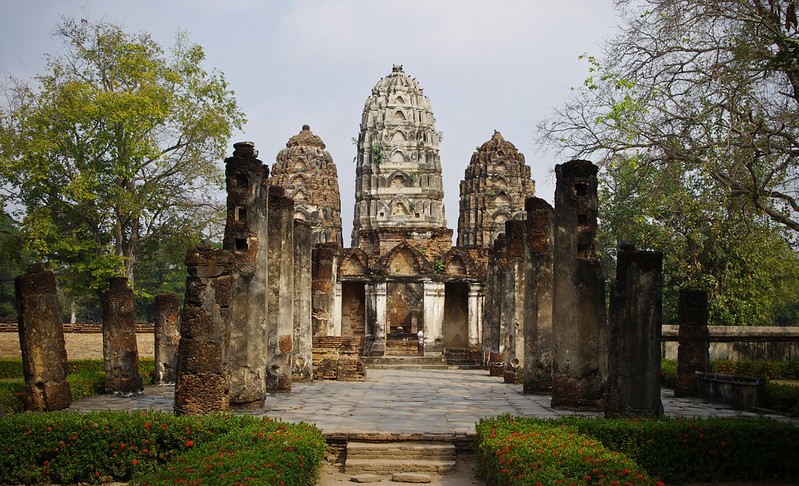 The capital that preceded Ayutthaya, Sukhothai sits at the lower part of Northern Thailand. The major temple ruins that resulted from that era have been grouped together to form Sukhothai Historical Park, a wide expanse of 5 different zones covering an area of 70 kilometers. Compared to Ayutthaya, Sukhothai is definitely a lot more spread out especially if you have plans of visiting all 5 zones but the bulk of the more interesting temples are in the leafy and pleasant central zone. I only managed to go to 3 zones during my visit to Sukhothai last year, which I thought was enough to cover the highlights.

Where I stayed in Sukhothai: As I wanted to be close to the temples, I opted to stay at Thai Thai Sukhothai Guesthouse, which offered excellent value. I got a well-appointed airconditioned room all to myself with buffet breakfast all for approximately 1000 baht! You can also book this guesthouse here and compare for the best rates.

Verdict: Ayuthaya or Sukhothai, which one is better?

While I think both Ayutthaya and Sukhothai are must-sees in Thailand; if I had to choose between the two, I would choose Sukhothai. The ruins just seem more vivid here, and its setting in a rural area only adds to the allure of being in an archeological site.

My main consideration back then (I chose to go to Sukhothai first) was the ease of getting there. I decided to go to Sukhothai as it was harder of the two to get to while Ayutthaya at the very least could be done as an easy day trip from Bangkok. That’s another way you could look at it to help you decide.

If you are adamant about visiting both Ayutthaya and Sukhothai, it’s also possible. From Ayutthaya, you can take a train to Phitsanulok and from Phitsanulok, take an approximately 1 hour bus ride to Sukhothai.

You can easily visit both Ayutthaya and Sukhothai if you have the time as there are daily bus departures between the two points. The ride takes approximately 4.5 hours each way. You can check tickets here.

Have you been to Sukhothai or Ayutthaya? What are your thoughts on either?