Celebrity Chef Jereme Leung is no stranger to the world of hotels. Many of his restaurants around the world are likewise located in luxury hotels so it is probably only apt that he chose Raffles Hotel as his base in Singapore. 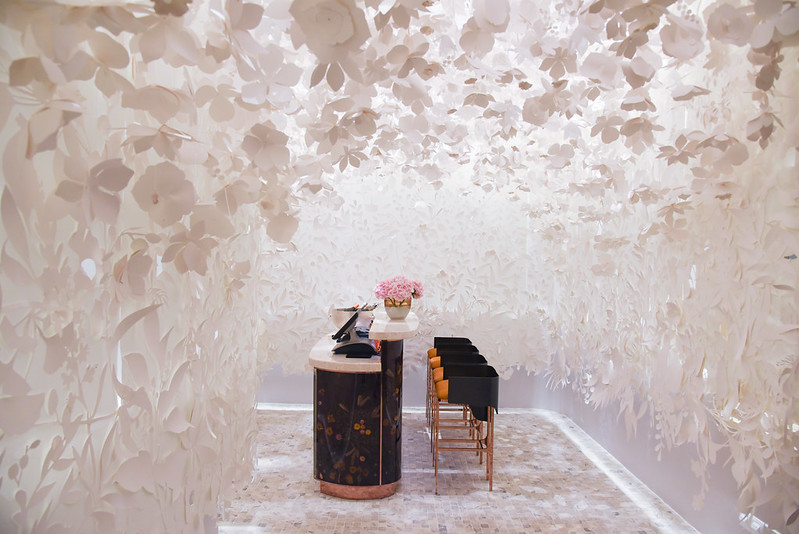 藝 yi by Jereme Leung is a modern take on provincial Chinese cuisine. Chef Jereme Leung himself states that the dining experience at the 111-seater venue need not be so formal and even encouraged the raising of rice bowls while eating one’s meal in traditional Chinese custom. The ambiance on the other hand, is undeniably upscale. Even the entrance alone takes one on a whimsical journey with elaborate paper flower cutouts hanging from the wall and the ceiling. 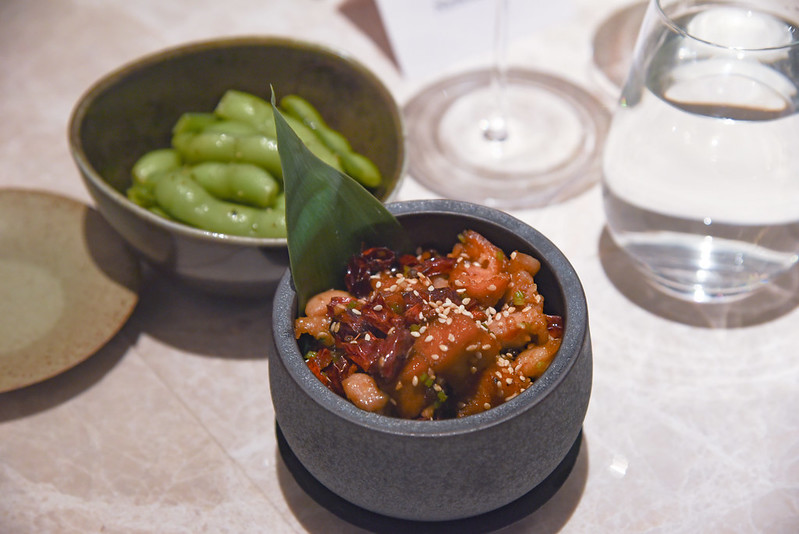 The very first dish I tried here, the Sichuan Spicy Chicken with Luncheon Meat (S$10) was a slight departure from everyone’s favorite Sichuan dish with soft luncheon meat competing with the smoky/spicy chicken for top billing. For people like me who can’t really tolerate extremely spicy food, I found the spicy chicken here to be on the mild side. For something with more of a kick, I’d recommend the Sichuan Style Chicken with Peanut Sesame Chili Dressing (S$26) instead. Do note that it generally takes a while for the spiciness to hit. 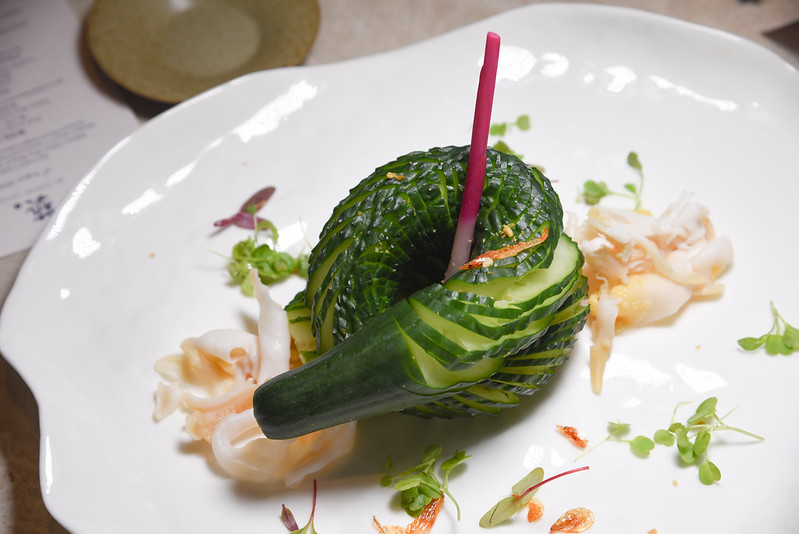 One normally wouldn’t think much of cucumbers. After all, these are usually used as decorative items in Chinese dishes. However, there’s something addictive about the Hundred-ring Cucumber with Poached Sea Whelk (S$26). The cucumber is cut into small pieces while still retaining its wholeness – resulting in a kind of crispy texture that I normally don’t associate with the gourd. I could not control myself from eating quite a few! It comes lightly soaked in Chef Jereme’s secret sauce and is served with sea whelk on the side. 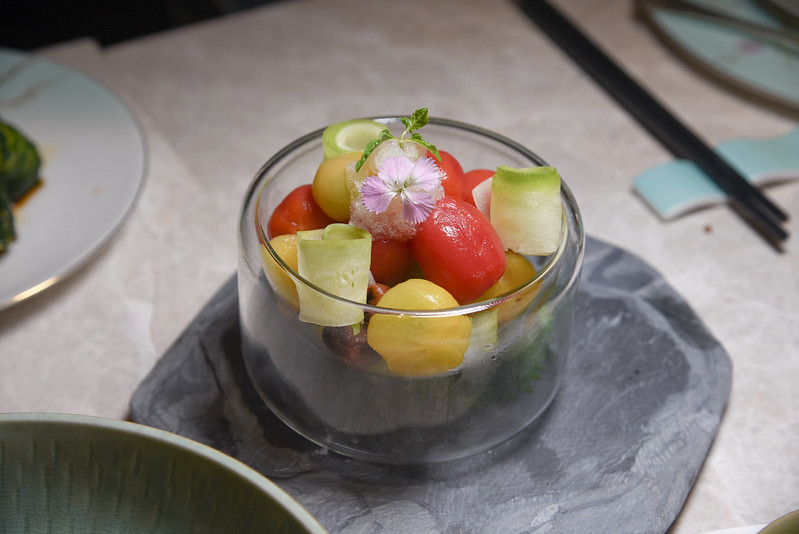 The Plum-pickled Tomatoes, Crunchy Turnip and Sweet Vinegar Vegetables (S$18) is one of Chef Jereme Leung’s signature dishes. I’ve also tried it in Conrad Manila’s Chinese restaurant, China Blue, which is also by Chef Jereme Leung. Fine enough to eat on its own but even better when served right after one of those Sichuan dishes. The tomatoes here are delightfully sweet and serve an almost fruity purpose.

The Smoked Honey Soy Mackerel and Savoury Pickled Cabbage (S$26) is another excellent choice before delving deeper into the mains. The fish was firm and retained a nice crisp as a result of being deep fried (they will only fry it upon somebody ordering the dish). Served in fillet style, the fish was also distinctly sweet. I ended up mindlessly munching on quite a few pieces. The sour pickled cabbage that came along with it was an excellent contrast to the sweetness of the fish. 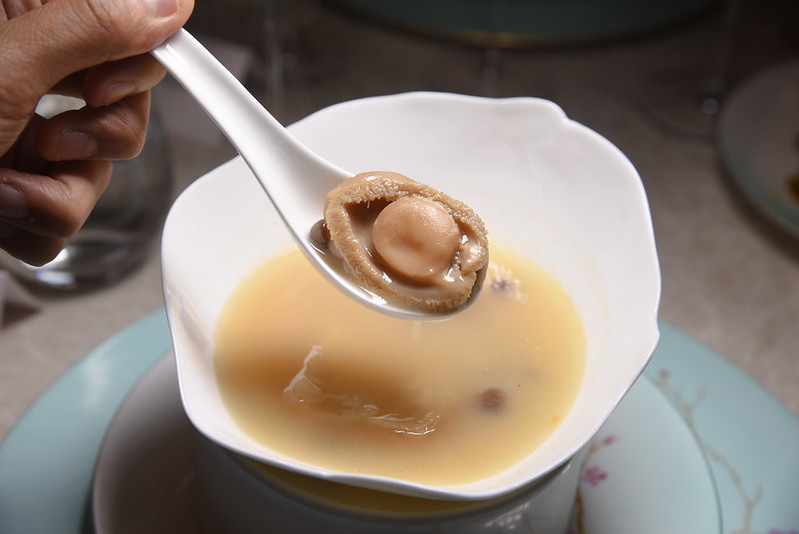 The Fish Cartilage Soup with Abalone, Fish Maw and Crab Claw (S$28) was brimming with so much collagen that Chef Jereme joked that everyone who drank it will leave the dinner with rejuvenated skin. Having been boiled for hours, the broth was delightfully nourishing and also carried a herbal flavor that I normally don’t perceive in chicken stock. 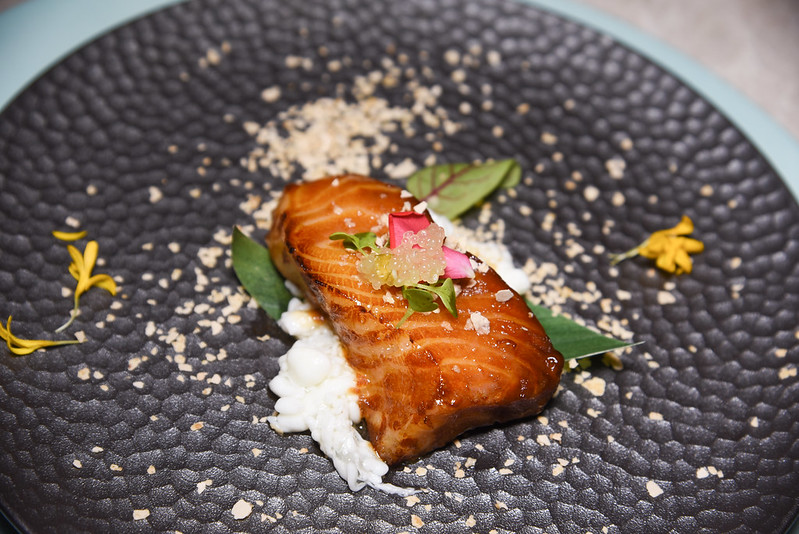 A safe choice for a seafood dish is the Baked Cod with Wild Honey and Soy Sauce Reduction on Salted Egg White (S$32 per serving). Delightfully plump and oh-so-tender, this was perhaps the most conventional among the dishes I tried. The cod was ever reliable with its slippery and melt in your mouth texture. Even without the wild honey and soy sauce combo, it would have still tasted good on its own. 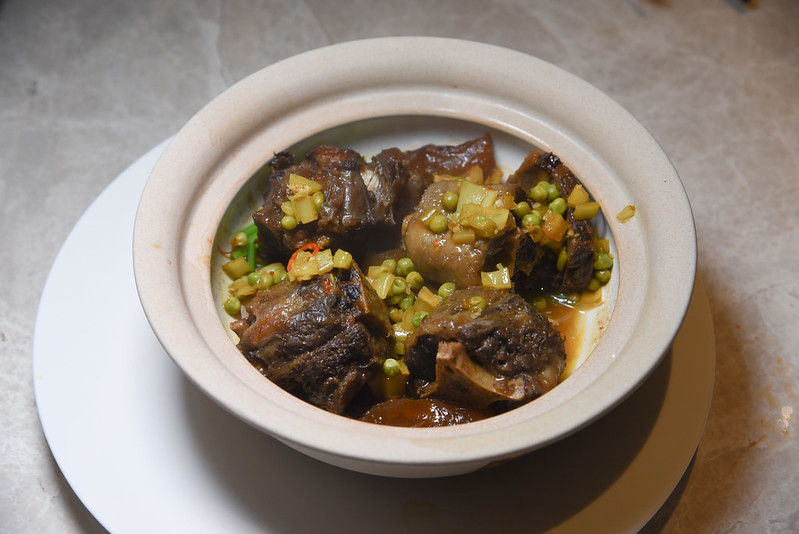 One of the crowd favorites that evening was the Beef Cheeks, Tendon, Ox Tail with Sorghum Grains and Wine (S$42). You know a dish is good if it’s addicting enough to make you want to soak it upon a whole bed of rice. That’s exactly how it should be eaten in this case – with the sauce penetrating the rice grains and alternating with the juicy meat – the type with the fibers collapsing easily as it enters one’s mouth. Chef Jereme Leung was also quick to emphasize how the restaurant makes it a point to serve rice piping hot by delivering our rice straight from a rice cooker – pointing to a general trend these days by restaurants of pre-cooking rice for an entire day’s supply, 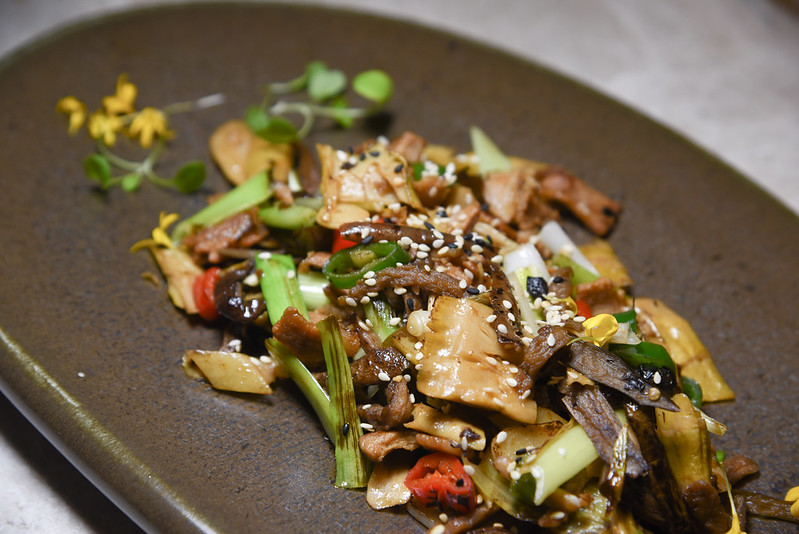 What held the Stir-fried Pork Belly and Air-dried Bamboo Shoots and Eggplant (S$24) together in my view was the well-textured and delightful bouncy bamboo shoots. It’s complemented by an earthy array of greens which together create a flavorful aroma that rivals some of the other meat dishes. 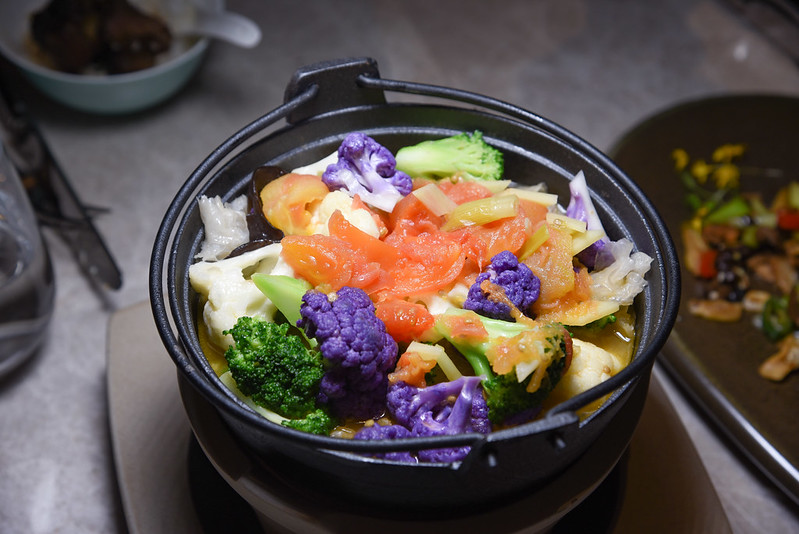 A continuation of a string of excellent vegetarian dishes, the Rainbow Cauliflowers and Black and White Fungus in Tomato Broth (S$26) is undoubtedly one instagrammable dish with its contrasting purple, red and green shades. The purple comes from the cauliflower – truth be told, I’ve never devoured purple cauliflower before. This is one instance where eating one’s broccoli will actually bring pleasure. I particularly enjoyed the soup here – sweet and nourishing after having absorbed the powerful nutrients of the cauliflower/broccoli/tomato combo. 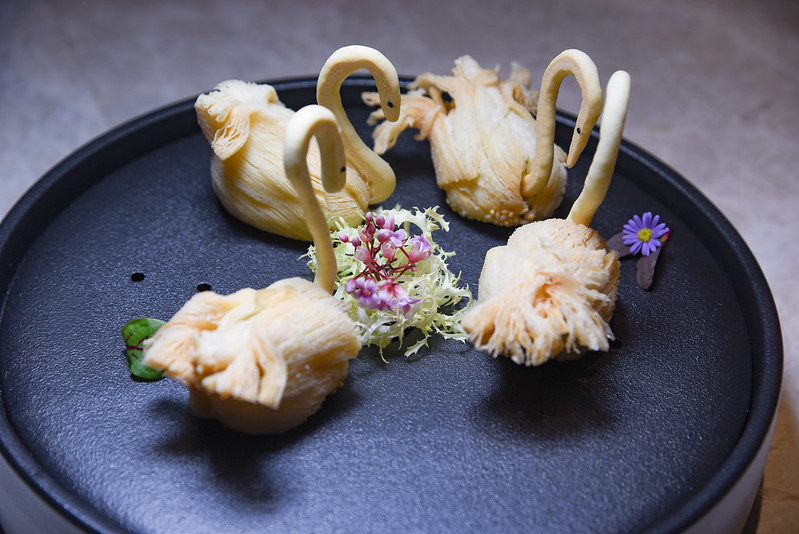 Throughout the entire evening, Chef Jereme Leung reminded us that he is half Singaporean and as an ode to his heritage, the restaurant serves an especially photegenic Swan shaped Durian Pastries (S$12) as a sweet ending. 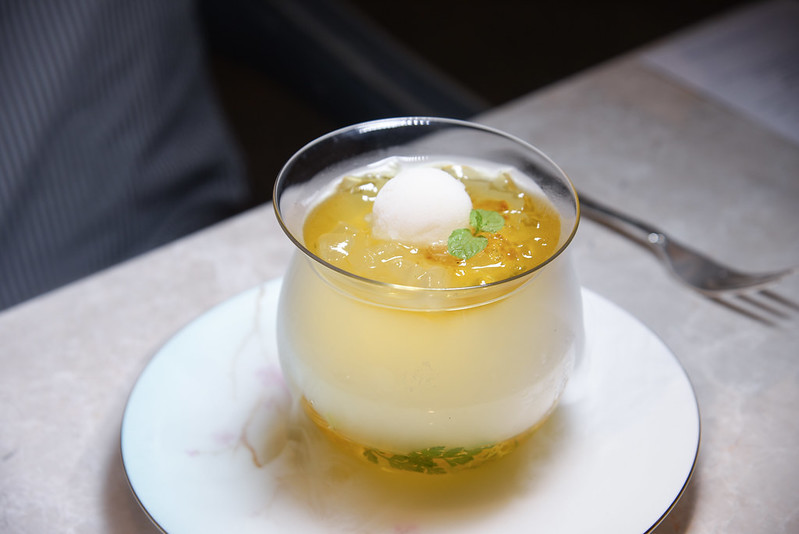 For those who don’t take durian, a preferable dessert option is the refreshing Soursop Sorbet with Peach Gum and Lemongrass Jelly (S$10). Taking into account Singapore’s warm clime, this is just the right kind of ending that one should have before stepping out and facing the sweltering heat of the Lion City.

藝 yi by Jereme Leung is a place I’d return for its varied Chinese cuisine. Indeed, it plays on this diversity with its carefully curated selection of dishes from all over the massive country (and they take the effort to bring in some of these ingredients as well). Dining here, one can sample a number of dishes that are not found elsewhere in Singapore. Price-wise, it is rather erratic. For a place like this, it’s not consistently on the high side either. While the dimsum selection here is pricier than elsewhere, many of the classic dishes are rather well-priced and even the elaborate desserts are priced lower than in other hotel Chinese restaurants.