I had my first taste of Peruvian food more than a decade ago as a student in San Francisco. Having returned to Asia since then, I could not really find a Peruvian venue that was as compelling. That is, until Tono Cevicheria came along in Duo near Bugis. Conceived by Chef Daniel Chavez who also owns Ola Cocina del Mar in Marina Bay Financial Centre, Tono is quite possibly the only full-fledge Peruvian restaurant in Singapore today. While it is touted as a “cevicheria,” it does not mean they serve only ceviche. On the contrary, there are varying dishes – from small plates to meatier mains. I was recently invited to Tono to check out the food and I must say it ticked off my checklist for authentic Peruvian cuisine.

We started off with the iconic dish – ceviche. In Tono, the dishes are reflective of the various nationalities living in Peru. Some dishes come with Japanese nuances which they call “Nikkei”, owing to the large Japanese community there while there is also “Chifa,” another category which carries plenty of Chinese influences. 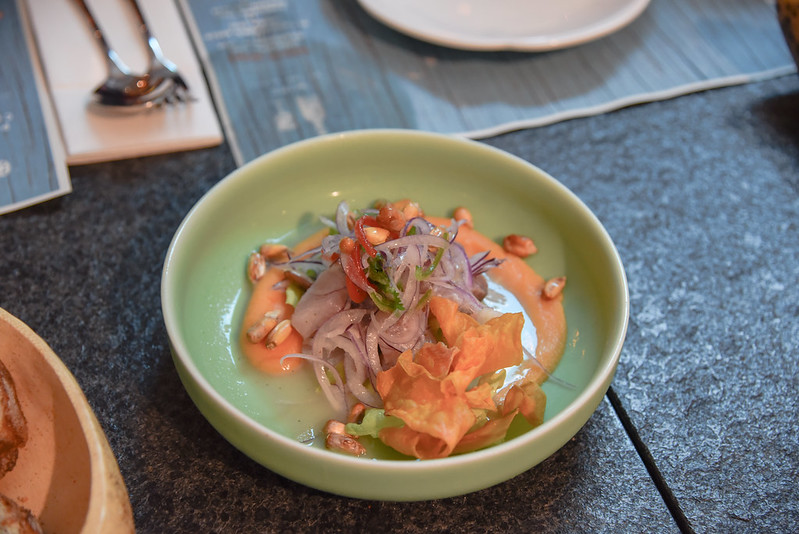 The venue has plenty of types of ceviche and I got to try two. The first is the Clasico ($25) – the regular type of ceviche which people who have had exposure to Peruvian cuisine would most likely have tried. Wonderfully sour, the clasico comes with plenty of lime juice slathered over the raw white fish. The onions and coriander give the dish an added fragrance and complexity. 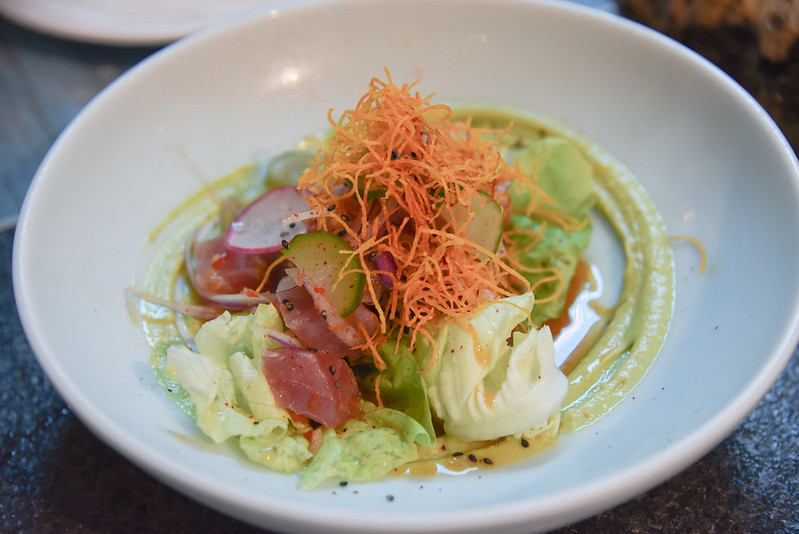 Next came the Nikkei version of the ceviche ($24). The Japanese influence becomes palpable with one bite as the mirin and hondashi become apparent to the tastebud. While there is more complexity in taste in the Nikkei version of the ceviche, I would recommend ordering the Clasico instead. The Nikkei ceviche tastes quite close to what some poke bowls may offer, understandably due to the raw fish and Japanese seasoning combo, thus reducing the uniqueness factor. 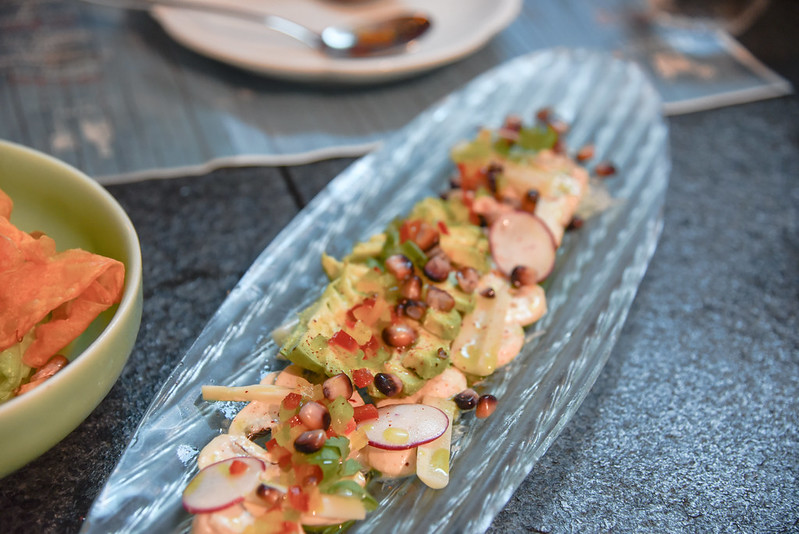 Next came the Avocado ($22) which is a vegetarian style Tiradito (Peruvian appetizer / salad). One interesting ingredient here is the palmito or the heart of the palm tree which gives off a similar chewy texture to bamboo shoots. 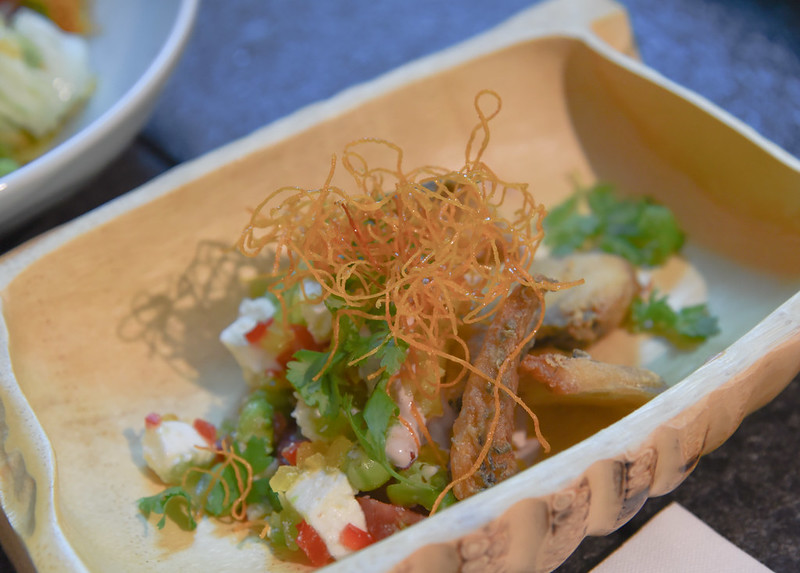 The Solterito ($24) is another interesting dish. Placed inside an elongated wooden platter, the dish is made up of fish slices fried to a crispy texture yet still retaining the juiciness within. Potato mash, fava beans, feta cheese, black olive mayo, tomato and canchitas round up the dish. The latter is notable for it is the only ingredient that Tono actually imports from Peru. The Andean nation is more than a day’s flight away and it is not really practicable to import much else. 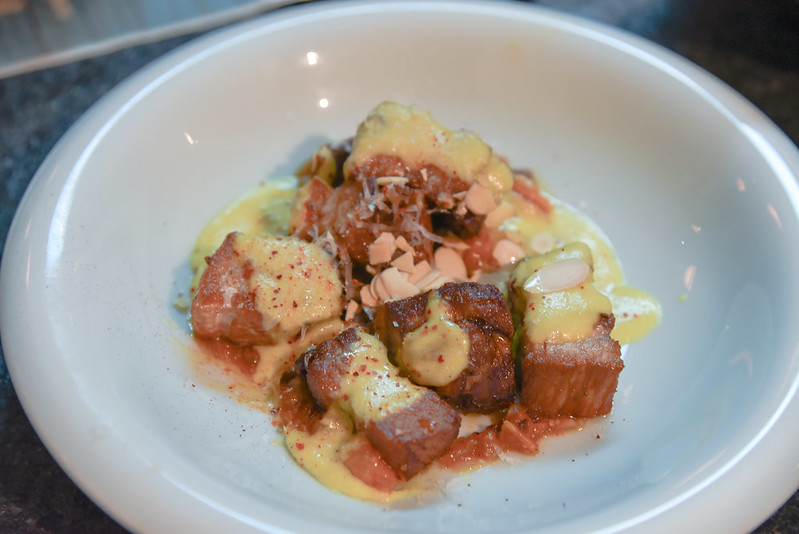 Continuing on with another crunchy dish, the Chicharron ($28) stands well as a crispy pork belly dish. The amarillo sauce which it comes with gives this familiar dish a Latin vibe. However, if you are looking for something special to try in Tono, your tummy space would do well with other hard-to-find dishes in Singapore that they do so well carry. 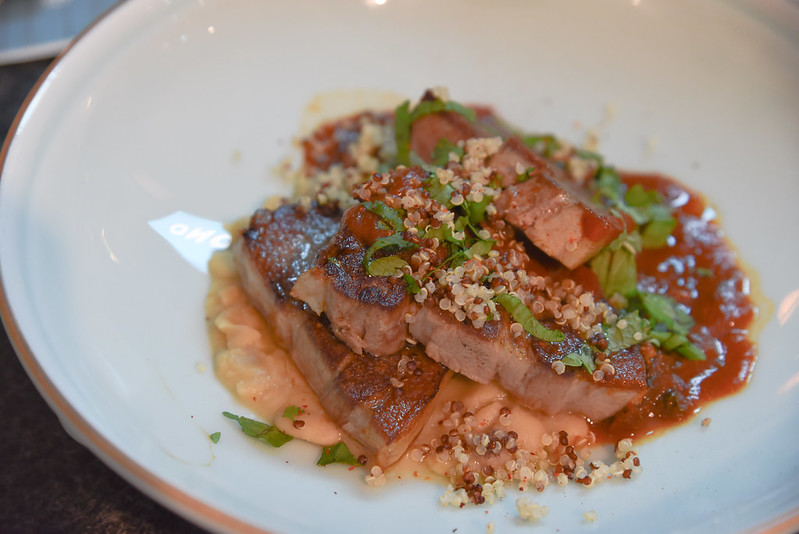 For a pork dish, I would recommend the Huaita ($32) instead. It’s slow-roasted pork with mint and coriander sauce. It comes with bean stew for a distinctly Andean vibe. 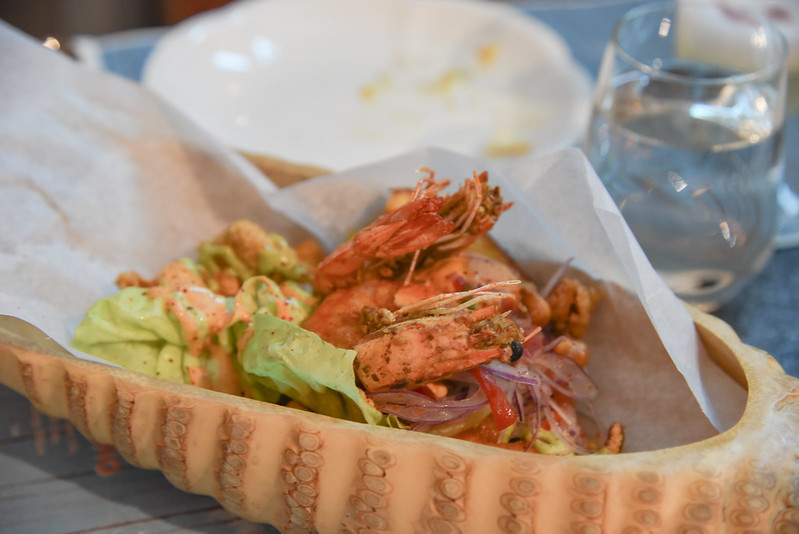 The Jalea ($32) is just the type of dish I would imagine would go well over drinks – some beer perhaps after work. It is one of the quintessential light bites – fried seafood – a cornucopia of calamari, octopus, prawns and tapioca chips – with a distinctly smoky flavor due to the version of chili mayo used. Slather the slice of lime over it for an added zing. 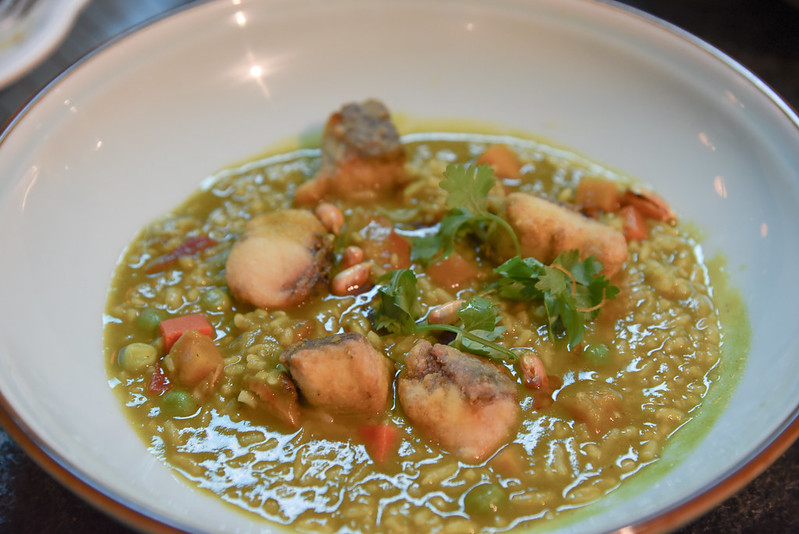 A faint reminder of gumbo, the Aguadito ($28) is a Peruvian stew filled with crispy fish, chicken, canchitas in a coriander / cumin soup base. The pumpkin gives it an added yellowish shade. The dish also comes with long-grain rice so if you are looking for a carbohydrate option or simply something heavier, this is a plate to consider. 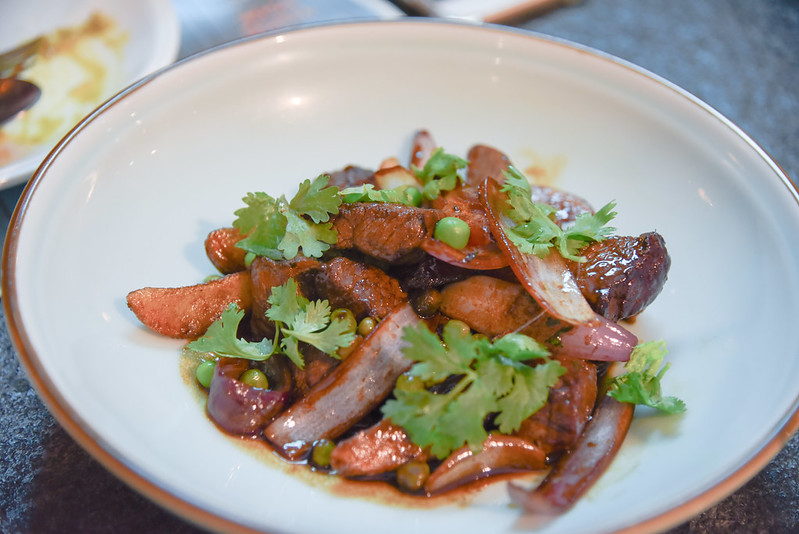 I have mixed feelings about the Lomo Saltado ($40) that came next. An example of “Chifa” or Chinese-influenced Peruvian food, the stir-fried beef was delicious and especially tender. I really loved it and helped myself to quite a few servings while everyone else in the table seemed to be already full with the plates that preceded it. That being said, I thought it was a tad pricey. 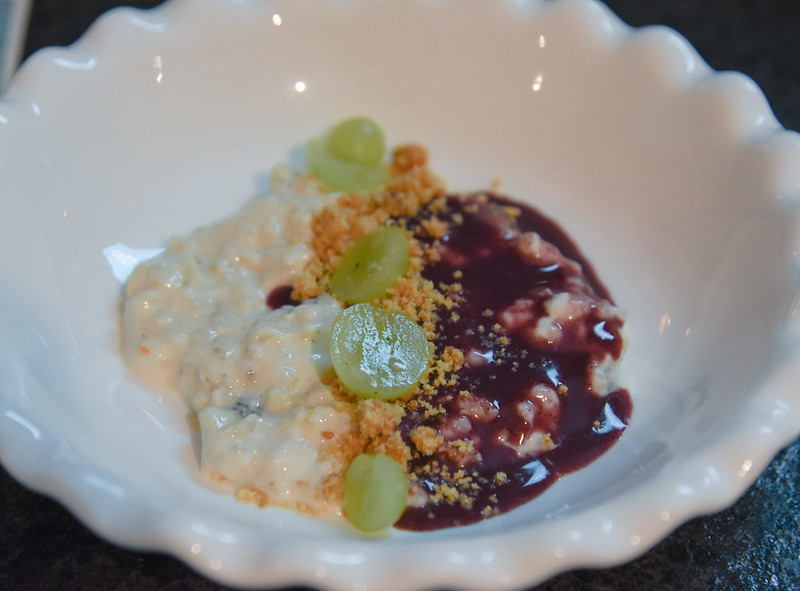 We ended the meal with two desserts – the Combinado ($12), essentially a 2-in-1 dessert. Neatly divided into two with rice pudding on one side and mazamorra on the other, the former consists of bomba rice cooked with milk, cream, sugar, orange peel and vanilla, with coconut puree added at the very end. The darker half is the mazamorra which is made with ground purple corn boiled with pineapple skin, cloves, star anise, apples and quince. It’s quite a special dish and reminds me of sweetened porridge. 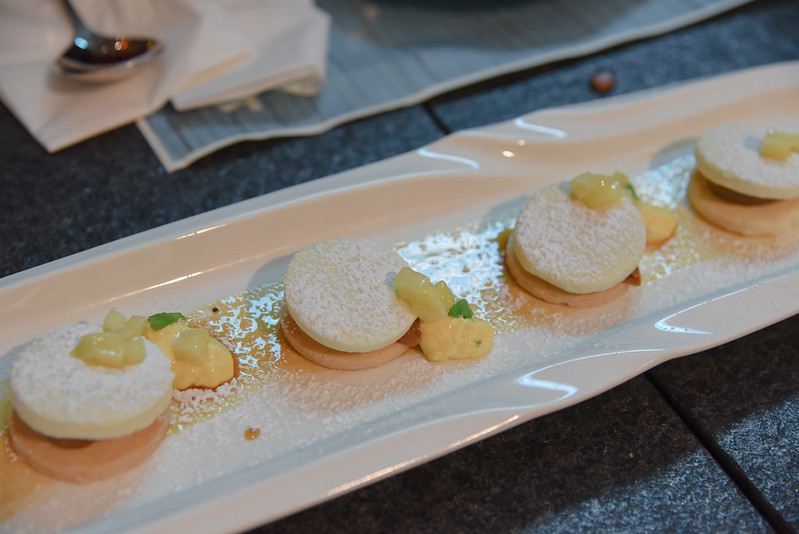 The Alfajores ($12) that followed was especially delicate. Looking like a cross between macarons and cookies, it’s especially difficult to lift up without breaking the crust.

All in all, I quite enjoyed the food at Tono. The concept is something refreshingly new in Singapore and I thought the execution was done excellently. I will be back!