If I were to base my travel decisions solely on the opinions of the people around me, I probably would not have gone to Iran. To say this country has a bad reputation is a gross understatement – it probably ranks near the bottom among countries in terms of public perception. Of course, it does not help that its government once voiced its wish to have “Israel wiped off the map” but then again, as in most countries, the overwhelming majority of the citizenry does not share the same sentiments as with its leaders. A country like Iran deserves more than just a second look. What if instead of Iran, we call it by its former name, Persia? Would thoughts of nuclear programmes and hard-line Islam suddenly switch to dreams of an ancient civilization, ornate palaces and a forward-looking populace? Indeed, this country’s current standing is perhaps a juxtaposition of these two worlds. To dismiss Iran merely due to the negative perception would mean foregoing the opportunity to (1) meet the friendliest and warmest people on earth, (2) see some amazing ancient ruins and stunning architectural works, (3) try some great and varied activities such as skiing, cycling, etc at a fraction of the cost and (4) perhaps have one of the most fulfilling travel experiences ever. 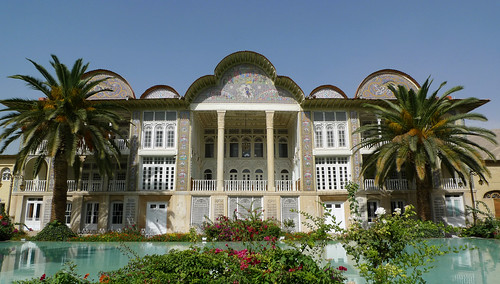 if you though iran was a big bomb site, you're wrong... that's iraq

During the days leading to my departure, almost everyone who learned about my trip thought that I was mad or some kind of a weirdo. I had only told a handful of people about my trip but this seemed to have spread all over, as I suppose there is a tendency for people to spread around rumors that someone had gone cuckoo. My friends, family and colleagues were genuinely concerned for my safety. “Please come back in one piece” was something I heard often, as if I was going to a war zone. The only people who didn’t think so were the ones who had been to Iran previously, and they were the ones who steadfastly vouched for the safety over there. These people had fondly shared with me memories of their trip to Iran and their wish to go back sometime in the future. Many of those who have been there actually rank Iran as one of their favorite countries, travel-wise.

Indeed, Iran has to be seen to be believed. All the bad press surrounding this country center on the nuclear program and its much-maligned relationship with the United States which in recent years also involved the detaining of some American travelers accused as spies. Perhaps it also does not help that it shares borders with real hotspots such as Iraq, Pakistan and Afghanistan, and that some people may equate Iran with Iraq due to the similar-sounding name. But outside of this, we don’t really hear specific news of anything resembling rampant crime, suicide bombings or terrorism in Iran itself. Iran is actually a very safe country. This is not to say that crime and other threats to personal safety are non-existent in Iran. No country in the world is completely safe. Although I found Iran to be among the safest countries I have visited, I would say that the normal precautions should be taken just like in visiting other countries.

Getting There: There are numerous direct flights to Tehran from most major European cities like London, Paris, Amsterdam, Vienna, Frankfurt and Stockholm. From Asia, there are direct connections from Bangkok, Kuala Lumpur, Beijing and Tokyo although the AirAsia service from Kuala Lumpur is often the cheapest option. There are no direct flights from the Americas, Africa or Australia.

Visa: Theoretically, most nationalities including Filipinos, Singaporeans, Chinese, Japanese, Australian, New Zealanders and most European nationalities (except for British) can get a visa-on-arrival in the major airports (i.e. Tehran, Shiraz, Esfahan, Mashhad, Tabriz) but it is highly recommended to pre-arrange a visa. This is usually fuss-free. You can ask a travel agent to apply on your behalf, afterwhich you will be provided with a reference number. With this number, you can choose to collect the visa either in your nearest Iranian Embassy or in any of the abovementioned airports upon arrival.

Cost: Iran is a cheap country to travel around. Aside from accommodations, transportation and food options are of great value. Budget travelers can go around comfortably with US$20-25/day; mid-range travelers with around $40/day and high-end travelers with US$70/day.

Money: The currency of Iran is Rial, though barely anyone mentions Rial when you’re out to buy something. Instead most people quote in Toman, which is basically the equivalent price in Rial but divided by 10. This means that when someone quotes you a price of 1000 Tomans, it means 10,000 Rials. Many hotels accept US Dollars but I would suggest changing your USD or Euros into Rials to get a better deal. The blackmarket rate during the time of my visit was 25% better than the official rate so I got a better deal by paying in local currency. Moneychangers abound in major cities. Some smalltime moneychangers hang around outside the exchange shops and may give slightly better rates, but as like in any other city, it would be wise to count any money handed to you carefully before walking away.

Transportation: Public transportation in Iran (especially in the big cities) is cheap, convenient and clean. A single ride in Tehran’s subway costs merely USD 0.25, public buses cost about the same. Taxis on the other hand, cost about $2 to $5 for most trips while intercity buses cost about $1 per 1 hour’s worth of bus ride. Buses for long-distance journeys can be booked in advance through the bus terminals directly or by asking your hotel/hostel to reserve for you. Even then, it is also possible to just show up to ride a bus that is departing only 30 minutes later. The only exception is during major holidays such as Nowruz (Persian New Year) when reserving is recommended.

Food: Kebabs, in different shapes and sizes, are the usual fare although in some places, you can find traditional dishes such as chicken with pomegranate and walnut (fesenjun) or lamb stew with split peas (dizi). Western fare such as pizza, sandwiches and wraps are also widely available. In Tehran, Asian food is also available.

People: Perhaps the best thing about this country is its people! Of the 32 countries I have visited so far, I found the Iranians to be the friendliest. The locals go out of their way to help. During my 9 days in Iran, I had people offering to pay for some of my bus rides. All sorts of snacks were also readily offered to me. I received several invitations to visit people’s houses. And I was greeted wherever I went. I never felt more welcomed in any other country than in Iran.

In Singapore, Manila and most other big cities basically, the only strangers who approach me to say hello are either the shopkeepers or those bothersome insurance agents lurking in random public areas. In Iran – even in their big cities – people approach me and talk to me because they are genuinely friendly and not because they are looking to swipe a couple of dollars off me. What a refreshing change that was.

What to see: The things to see in this huge country are about as varied as its landscapes. Activities can range from skiing to hiking, to desert-stays or even beach holidays. Iran is also home to several UNESCO World Heritage Sites including Persepolis and Imam Square. The UN World Tourism Organization ranks Iran among the most touristic countries in the world, with a potential that is on a par with other countries such as Greece, Egypt and India.

The most well-trodden tourist path in Iran involves a roughly two-week journey from north to south starting in the capital, Tehran and ending in Shiraz. In between, travelers stop for 2 nights in the cities of Kashan, Esfahan and Yazd respectively. This is the same route I took during my trip, though in reverse and for a shorter period.

When to go: Generally speaking, April to June and September to November are the best times to visit. It will be too hot in midday from June to August, and most shops have siesta times of between 1pm to 4pm.

What to wear: A secular country historically, Iran has been an Islamic Republic since 1979. As such, there are a few restrictions in terms of attire. Western clothing is the norm for men although shorts are not allowed in public. Women on the other hand are required to wear long-sleeves and put on headscarves while outside.