END_OF_DOCUMENT_TOKEN_TO_BE_REPLACED

Palawan is often referred to as the Philippines’ last frontier, and there is more than just a passing truth to that statement. Taking a short drive through the elongated island, one immediately notices the craggy, limestone-filled landscape which shares more similarities with that of Krabi in Thailand, Ha Long Bay in Vietnam or Guilin in China than anywhere else in the Philippines.

I had the chance to visit Central Palawan a while back. The distance from Manila was merely 360 miles, thanks to direct air services by most of the country’s airlines, but the change from my hometown’s congestion-filled streets could not be anymore welcoming. I was finally in Puerto Princesa after an hour’s flight. I had to quickly settle some of my expectations – Palawan’s capital may have an exotic and picture-pretty sounding name, but apart from the litter-free streets there aren’t a lot of things which differentiates this provincial town from the rest….

END_OF_DOCUMENT_TOKEN_TO_BE_REPLACED

One of my favorite spots in Singapore has got to be Punggol Beach, which is situated at the northeastern end of the island just a few meters away from Malaysia. It’s one of the last remaining places in Singapore that still has a semblance of wilderness that is more authentic than the well-maintained nature reserves scattered around the country. I have been to Punggol Beach around 3 times now. Each time I go, I see a new paved road or construction that may very well force this small parcel of land to conform to the efficiency and orderliness which the rest of the island adheres to. Huge swathes of swampland and  grass fields have been replaced with concrete, and new housing flats are starting to dot the immediate landscape.

Thankfully, the beach itself is still there. Compared to other beaches in the country, the one in Punggol is not as crowded. Common visitors include fishermen, young parents trying to gather shells with their children and the occasional photographer. During weekdays, it’s even possible to have huge sections all to yourself. What makes this place so picturesque, especially at low tide, are the big rocks resting by the coast. These complement the surrounding waters very well. The only drawback from the place is that the industrial zone right across in Malaysia, are all too visible. 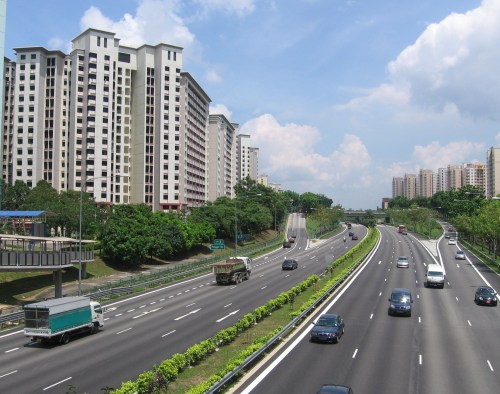 punggol is usually regarded as a boring new town that's simply a duplicate of the rest of residential singapore. this is true to an extent - but a large part of it is still undeveloped

The interesting portion of Punggol is near the end of the island. Otherwise, the rest of the town looks just like any other in Singapore – high rises, condominiums, government housing and the ubiquitous shopping center.

Grassy “lalang” fields such as these are being bulldozed and disappearing fast. Land is precious in a small country such as Singapore and these places are prime candidates for the next seaside condominium development. 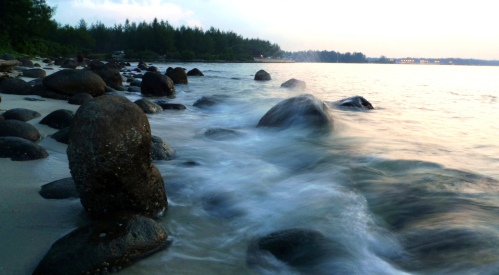 waves crashing into the rocks

The best time to visit this beach is during low-tide, when the rocks jut out from the sea. It makes for a nice view especially when the waves crash into the rocks, creating a silky water effect.

The beach has a a beautiful but eerie feel to it, especially just before the sun sets. No surprise, as it’s the site of a gruesome World War 2 massacre which killed hundreds. The place was never fully cleaned up, and some visitors still manage to find bones from those who were killed there. 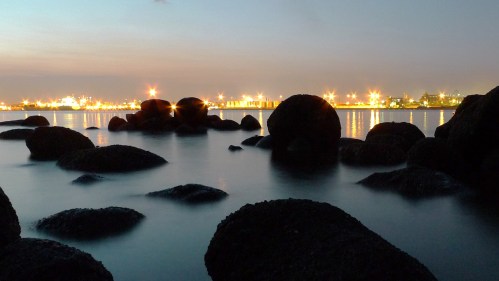 the lights behind are from malaysia

How to get there: The beach is a bit tricky to find. It’s not advertised in the tourist guidebooks or maps from the tourism board. However, there is a bus that goes there. Your best bet is to take the subway to Hougang station, and transfer to Bus #82 at the bus stop right outside the subway station. Take it all the way to the end. Believe me, you’ll know once you’ve reached the end.

Hi, I'm Bino, a part-time wanderer and a Singapore-based travel blogger. In this site, I share with you my top travel itineraries. Along the way, I also provide travel guides and tips, recommendations on awesome food to try and impressive hotels to stay! Read More…