In the past two decades, South Korea transformed itself from a developing country to a First World Country. Today, Seoul, is one of the most wired and technologically savvy cities around the globe.

Seoul’s metropolitan area is home to more than 25 million people. Parallel to its continuous growth in population, Seoul became a powerhouse in terms of economy. Some of the world’s largest companies; such as Samsung Electronics, LG, Kia and Hyundai, just to name a few, are based in Seoul. Truly, Seoul is a rising global city!

With Seoul’s current economic achievements, its rich heritage and natural landscape can easily be overshadowed. Set between a mountain and a river, the capital of South Korea provides a wonderful experience for every traveler.

Emerging from the ruins of war in the 1950s, Seoul is now generally recognized as a center of Korean culture — the country’s window to its past, present, and future. From monuments, ancient palaces, temples, culinary delights, outdoor recreation, to ultimate metropolis leisure, Seoul has it all.

Here’s a list of the most interesting places to visit when you are in Seoul, South Korea: 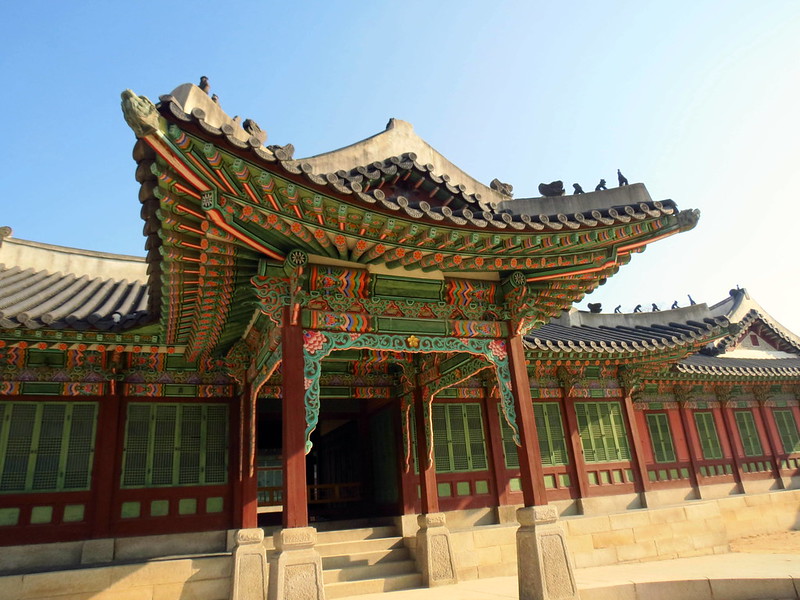 There were “Five Grand Palaces” built by the Joseon Dynasty in Seoul, South Korea. Among them is Changdeokgung Palace which means “Prospering Virtue Palace.” In modern times, this palace is now considered as a UNESCO World Heritage site. Making the list in 1997, the palace is said to be an “outstanding example of Far Eastern palace architecture and garden design”.

Tip: If you are wearing the traditional Korean costume, the “hanbok” – you can get free admission to the palace. Alternatively, visit on the last Wednesday of the month for free admission. 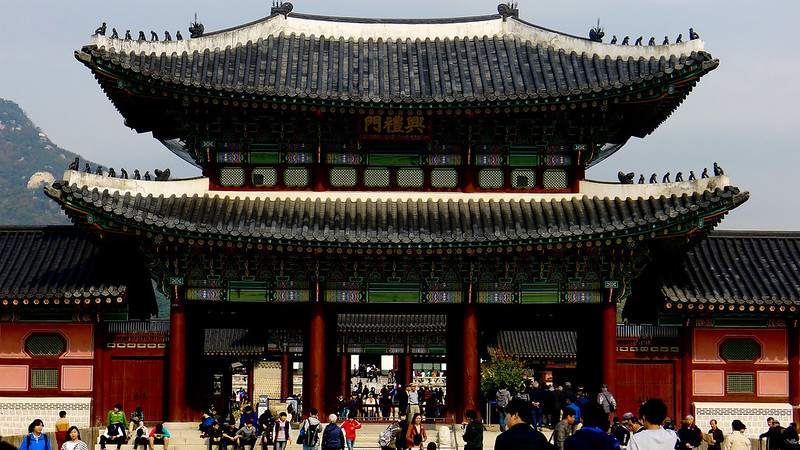 Seoul’s principal royal palace has become a main destination for tourists from around the globe. This palace is South Korea’s former seat of power. You can take English tours for an in-depth look at Korean architectural traditions as well as the country’s court customs. Take the time to explore the grounds and absorb the beauty of its pavilions, halls, ornamental gardens, and minor museums after your palace tour.

Schedules for tours in foreign languages: 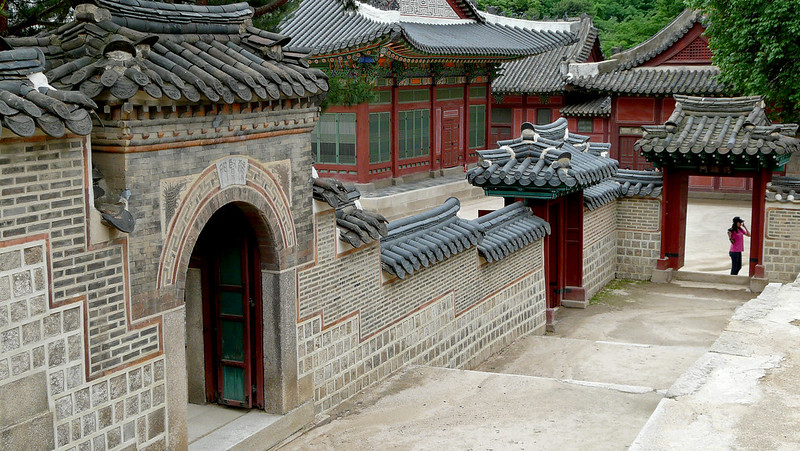 Witness the very amusing changing of guards at the Deoksugung Palace’s main gate, which is  scheduled at 11am, 2pm and 3:30pm. One of the “Five Grand Palaces” established during the Joseon Dynasty, this palace was home to Korea’s royal family up until their descent during the Japanese Colonial period.

This palace is just one of the many tourist attractions offered in Seoul. One of the best times of the day to visit Deoksugung Palace is during the evening so that you can fully enjoy the beauty of the infrastructure reminiscent of Korean monarchy.

Nearest station:
Deoksugung entry is located at 5-1 Jeongdong-gil or Deoksugung-gil, Jung-gu. The nearest subway station is City Hall Station, Station #132 on Line 1 or  Station #201 on Line 2.

* Free admission: Children from ages 6 and under, Seniors from ages 65 or older, visitors wearing hanbok, all visitors on the last Wednesday of each month or Culture Day 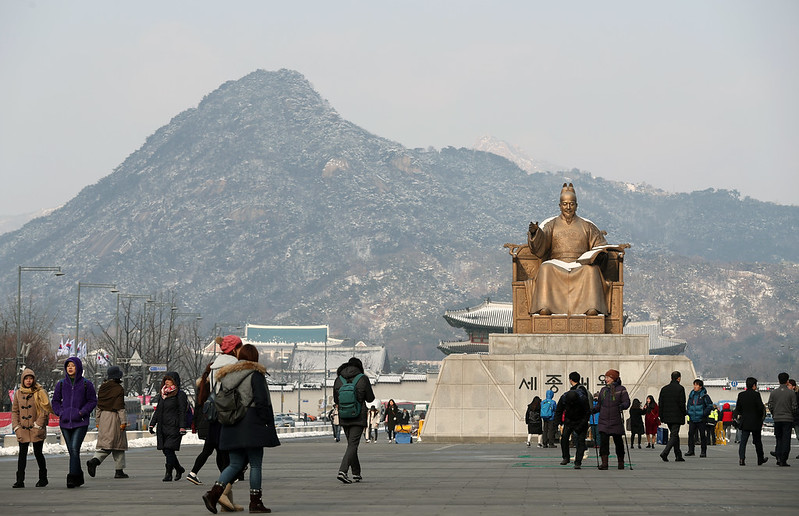 Gwanghwamun Square is a public space open for all. It was opened by the Seoul Metropolitan Government as an initiative to promote its plans for environmentally-friendly renovation projects. The square is stone’s throw away from Gyeongbokgung Palace.

This plaza plays historical importance, as this is where the royal administrative buildings can be found. The area is also referred to as Yukjo-geori or Street of Six Ministries. On another note, the plaza is home to two statues of Korea’s greatest heroes— Admiral Yi Sun-sin of Joseon Dynasty and King Sejong the Great of Joseon.

Opening hours: Open all year round. 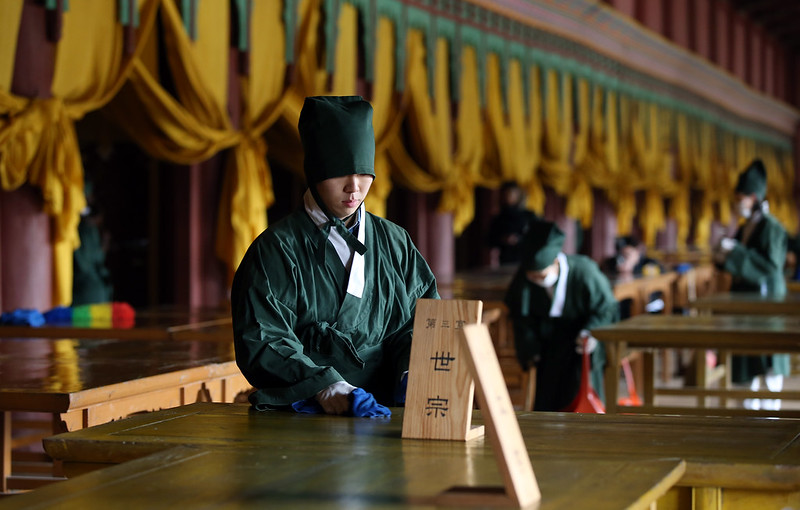 This historical shrine was built in 1392. It’s a Confucian shrine designated for South Korea’s deceased kings and queens, particularly during the Korean Joseon Dynasty. Jongmyo Shrine is considered the “oldest royal Confucian shrine” in the world, hence it was awarded a place in the UNESCO World Heritage site in 1995. Every May, you can witness the well-known ceremony of Jongmyo Daeje, a worshipping rite to honor Korea’s past royalty.

The wooden halls of Daeungjeon is considered as the largest worship area for Buddhists in Seoul. Rebuilt in 1938, the building was designed to parallel Joseon dynasty aesthetics. While the outside part of the temple is adorned with images depicting Buddha’s life, the interior displays three giant Buddhas representing the following: Amitabha Buddha, Historical Buddha, and the Bhaisaiya Buddha.

Opening hours: The temple is open all year round.

Nearest station: Take the subway and get off at Jonggak Station, Subway Line 1 then take Exit 2. 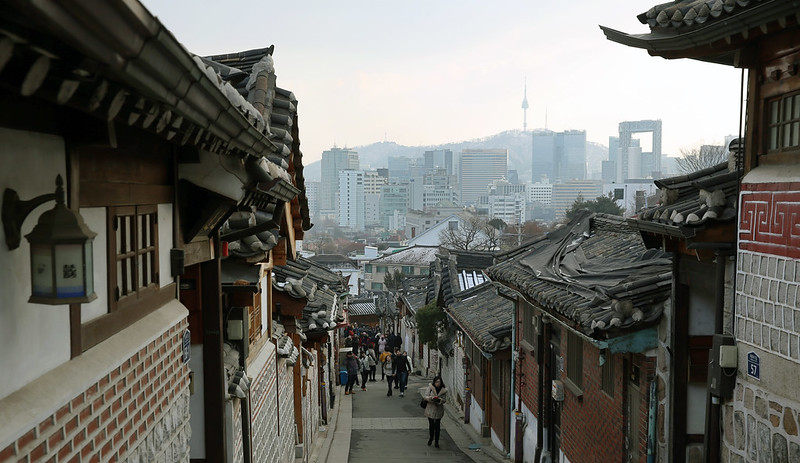 Situated  between Gyeongbok Palace and Changdeok Palace, the Bukchon Village is reminiscent of Korea’s traditional villages composed of hanoks or Korean wooden homes. The alleys are adorned with these preserved hanoks, opening a doorway for visitors to experience the urban environment during the Joseon Dynasty. The village is peppered with art galleries, cafes and dine in restaurants.

Opening Hours: Open all year round.

Nearest Station:
Take the subway line at Anguk Station, Seoul Subway Line 3, Exit 1 or 2. From the exit go straight for about 300m to arrive at Bukchon Hanok Village. 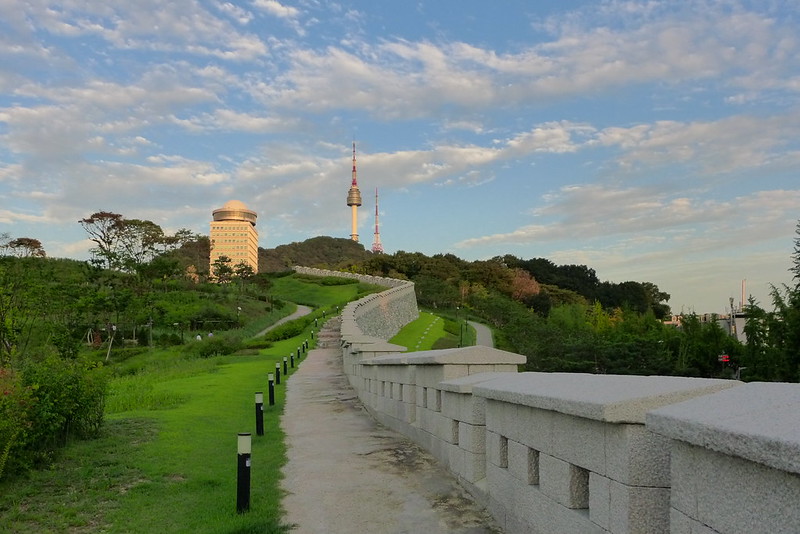 If you are in search of a more scenic view, head over to Namsan Park by the south of Myeongdong on Mt. Namsan. This area  is very popular among local and international tourists for its hiking trails, the N Seoul Tower, and a fantastic view of Seoul’s downtown.

Opening Hours: Open all year round, but take note of the following operating hours for certain sites: 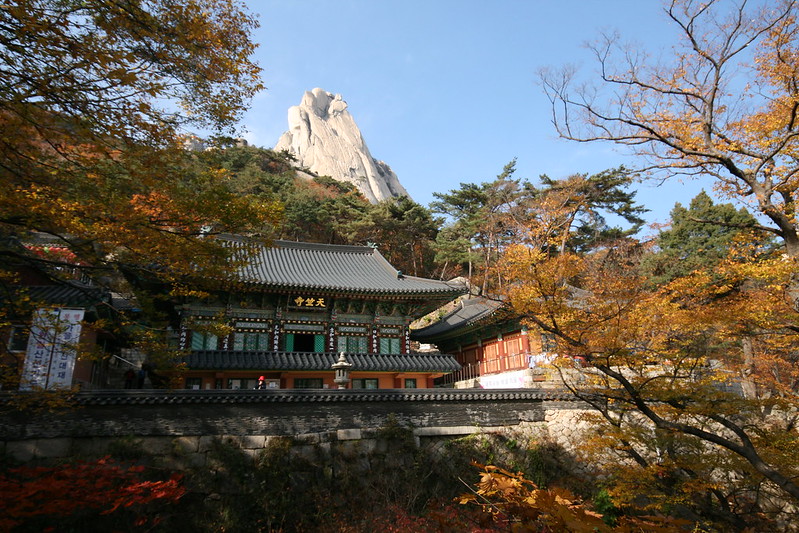 In the midst of a bustling metropolis, this park covers about 79.92 km of forested area with temples and granite peaks. It is one of the most popular hiking trails to date since its establishment in 1983. Apart from the 100 historical Buddhist temples found in the park, a  must-visit site is the Bukhansanseong Fortress. Don’t miss this 5-mile mountain wall when you decide on a hiking adventure at the Bukhansan National Park.

Opening hours: The park is open all year round. For hiking restrictions and other details, click here.

Nearest station: Take the subway and get off at Gupabal Station, Line 3, Exit 1. Take the Bus 704 bound for Bukhansanseong Fortress. Get off at the Bukhansan Mountain entrance bus stop. Walk for 10 minutes to arrive at the Dobong management office of Bukhansan National Park. 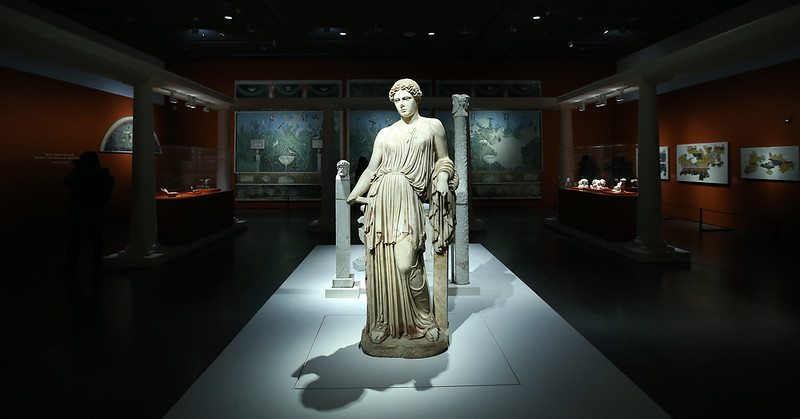 National Museum of Korea I © Republic of Korea, Flickr

The museum is the temple of South Korean history and art. The beautiful modernist architecture is home to Korea’s ancient treasures. Established in 1945, the museum continues their dedication in the study and research of history, art, and archeology. 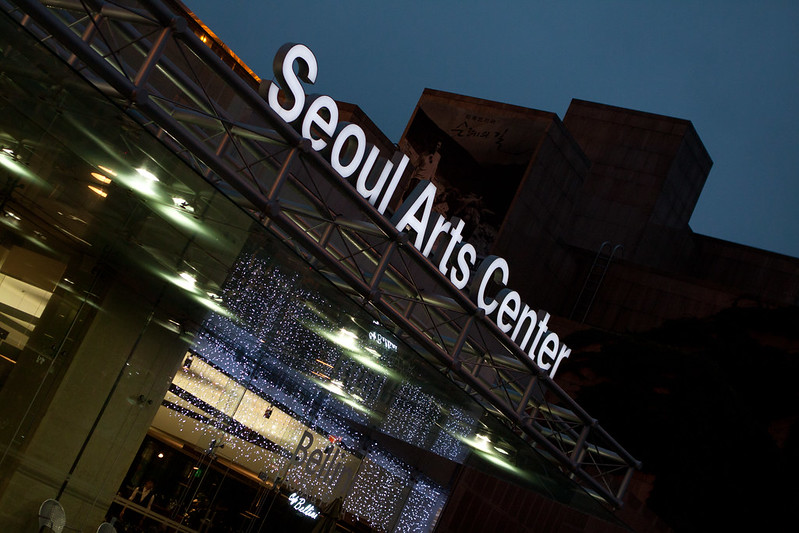 Admission fee: Fees will depend on the on going performances or exhibits. For more details click here. 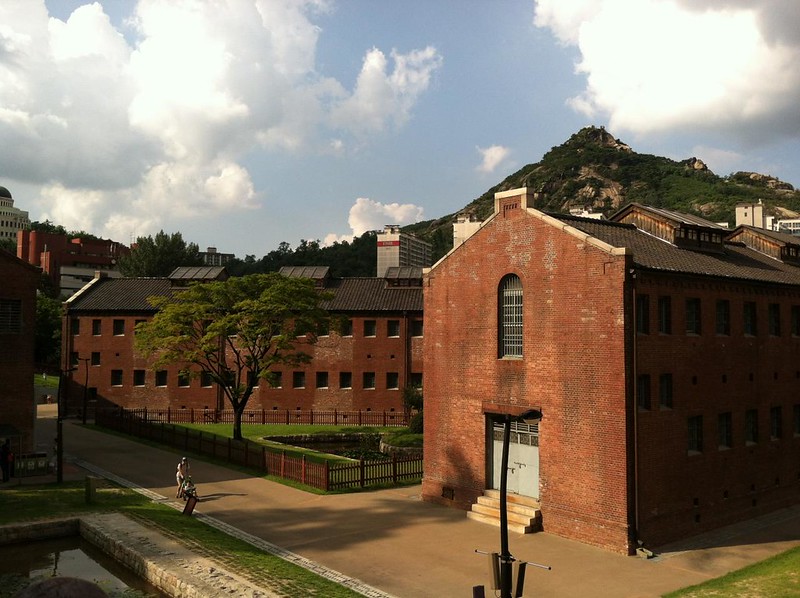 Today, this prison has been transformed into a museum to honor Koreans who fought against the Japanese Colonial Period. Kim Koo, who was a significant figure in Korean liberation movement, was imprisoned here in 1911. Part of the prison’s complex were made into historical monuments, while the History Hall has an exhibit detailing the stories of people who were imprisoned in these walls.

Nearest Station:
Seodaemun Independence Park and Seodaemun Prison are accessible from exits 4 or 5 of the Dongnimmun Station on Seoul Subway Line 3. 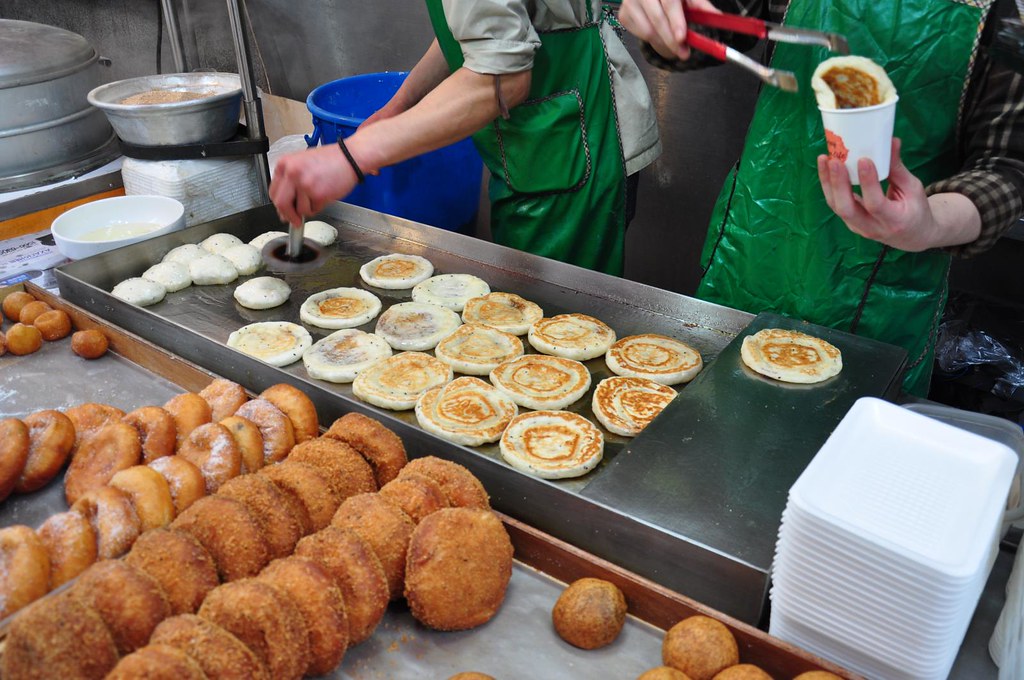 Dating back to 1414, the Namdaemun Market is the oldest and largest market in Seoul. Immerse yourself in the vastness of stalls offering a variety of goods and commodities. The most famous of which are food stalls offering authentic Korean delicacies from kalguksu noodles, bibimbap and sujebi.

Opening hours: The operating hours vary by shop, however, the market is typically closed on Sundays.

Nearest station:
Take the subway and get off at Hoehyeon Station, Line 4 then Exit 5. Walk for around three minutes from Sungnyemun Five-Way Crossing toward Hoehyeon Intersection.

Insa-dong Maru is fast becoming Seoul’s souvenir haven for all things Korean. This community of shops offers traditional Korean commodities such as pottery, crafts, fans, clothing, earthenware and many more. Don’t miss shopping in this neighborhood before you head back home.

Opening hours: Open all year round.

Nearest station:
Take the station and wherever you are coming from you can go down at the following stations:

Love tea? There’s no way you should pass the opportunity to try out Seoul’s most quaint and charming teahouse. Nestled in a 1930s hanok which was once the home of Lee Yae-jun, a famous Korean novelist. The teahouse is surrounded by a garden, and serves a wide array of teas.

Opening hours:
They are open from 11:30-22:00 but closed during Seollal or Lunar New Year’s Day & Chuseok or Korean Thanksgiving Day Holidays.

Nearest station:
Suyeon Sanbang Teahouse is located at #8, Seongbuk-ro 26-gil, Seongbuk-gu, Seoul. Take the subway, Hansung Univ. Station, Seoul Subway Line 4, Exit 6.Then take Bus 03, 1111 or 2112. Get off at Dongbang Graduate University. Suyeonsanbang is about 130 meters away from the bus stop.

* They are closed during Sunday, Seollal or Lunar New Year and Chuseok or Korean Thanksgiving Day.