During the time of my flight, the check-in counters at Changi Airport Terminal 1 were in the midst of an upgrade. The airport was building a communal check-in area for passengers flying first or business but this was not completed yet so I opted to check-in at the Qantas premium economy counter. 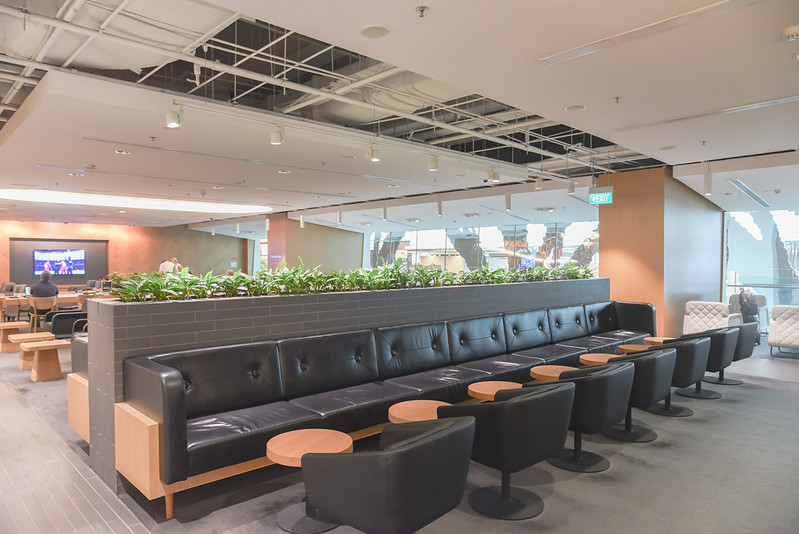 My flight gave me access to the Qantas Singapore Lounge which I have previously written about. It’s one of the more appealing lounges in Changi Airport and is one of the very few that offer bespoke cocktails, artisanal coffee and made-to-order dishes. In terms of food and drinks, it is certainly way better than the nearest Oneworld lounge, the British Airways Singapore Lounge next door. 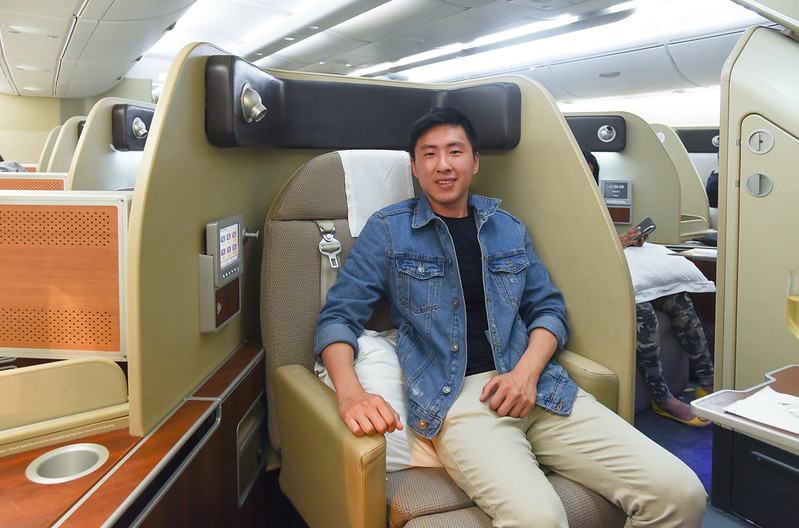 my seat for the flight – 1k

Qantas’ A380 is spread over two floors with the business class and premium economy cabins on the upper floor and first class and economy class in the lower floor. The first class cabin is made up of 14 individual suites. The color scheme is mostly beige with wooden accents lining the armrests and certain storage spaces. My seat for this particular flight was 1K which seemed more private than the rest as the front portion is walled up. 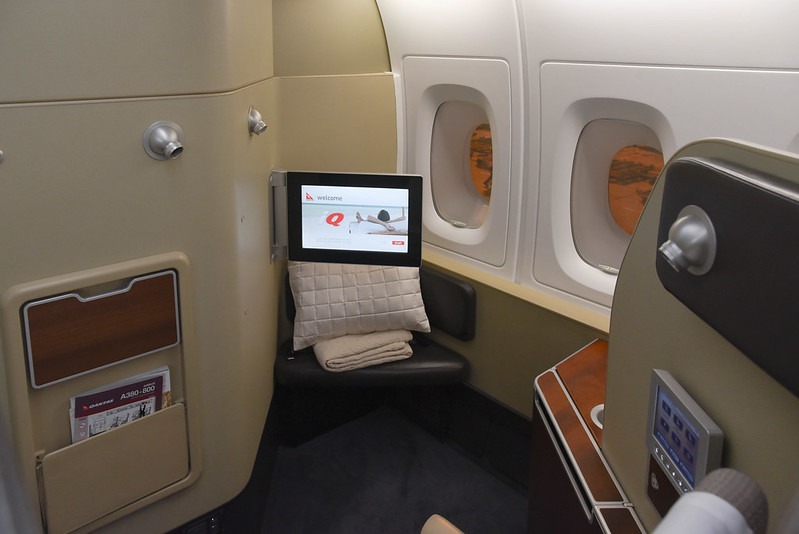 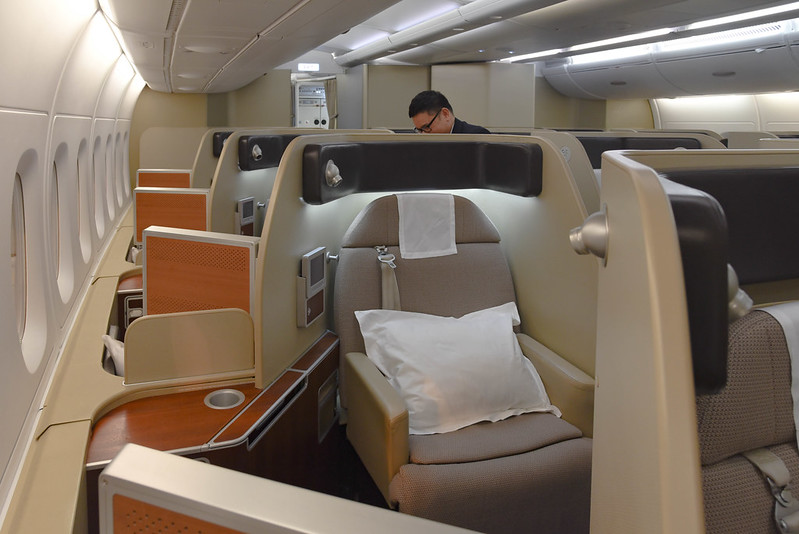 the seat behind me – 2k. notice how the front is more open compared to the first row seat

The seat in first class is manufactured by B/E Aerospace’s VIP jet group and is one of the most movable plane seats I’ve encountered. Not only can it be made to lie flat but it can also swivel and face various directions. When fully converted to bed mode, you’re essentially seeing a bed length of 79 inches and width of 22 inches. This is just 0.5 wider and 1 inch longer than their business class seat. While the increment may not seem significant, this discounts the extra non-bed space of the suite which includes a wide area to allow the seat (and passenger) to face various directions. For passengers seated at the middle row, there are no stowage bins on the ceiling and this creates an extra sense of space as well. 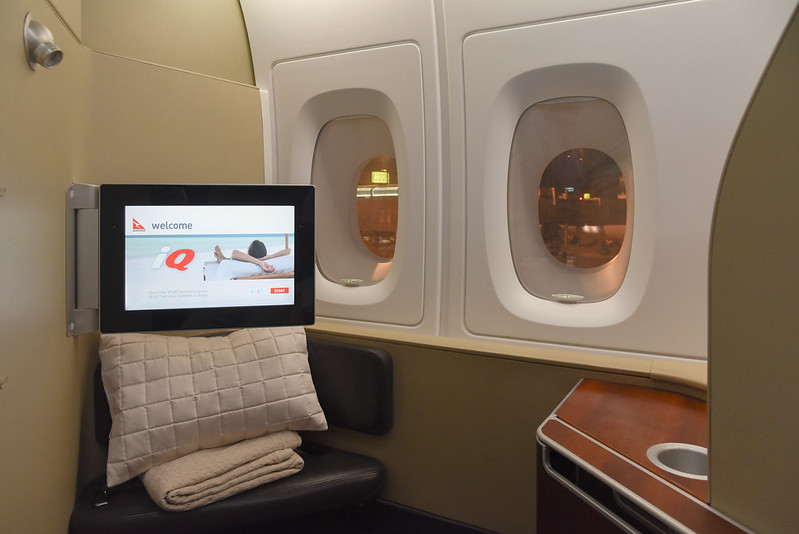 guest seat on the opposite end of my “suite”

To be honest, I found the suite really spacious. Even when lying flat, I could not reach the other end of my suite with my toes. The space could easily fit two and indeed, there is a leather guest seat at the other end of my suite to allow a friend to dine with me if I wish. The dining table which can be drawn out of the seat is huge and seems to have been made for couples to dine. 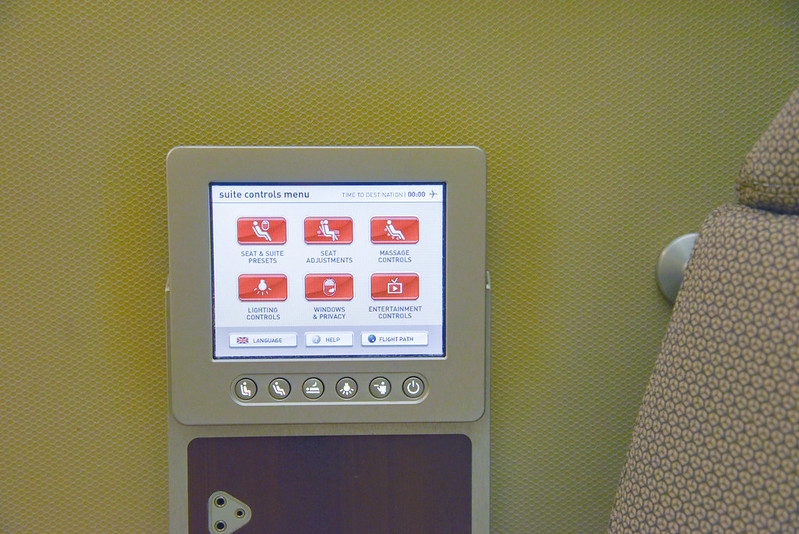 my personal remote – check out the massage function!

A remote within close range allows me to control my seat and access other features such as the massage and entertainment system. While most airlines display the “flight time remaining” on the monitors, Qantas has it on this remote. I thought this was pretty convenient as I could easily check on the time without having to get up. 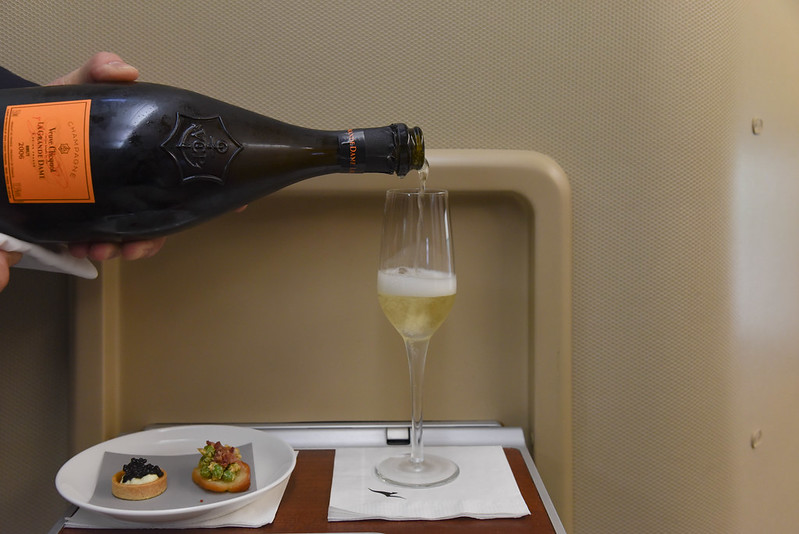 time for some champagne

As soon as I took my seat, one of the crew members came by to introduce himself and that he was going to take care of me during the flight. He also asked for my choice of drinks and I started off with champagne. Qantas serves a few different kinds of champagne in first class including the Taittinger Comtes de Champange Blanc de Blancs, Pol Roger Sir Winston Churchill and the Veuve Clicquot La Grand Dame. I chose the latter and my champagne came with some canapes with caviar. A similar bottle (2006 vintage) easily costs S$250 on the ground! 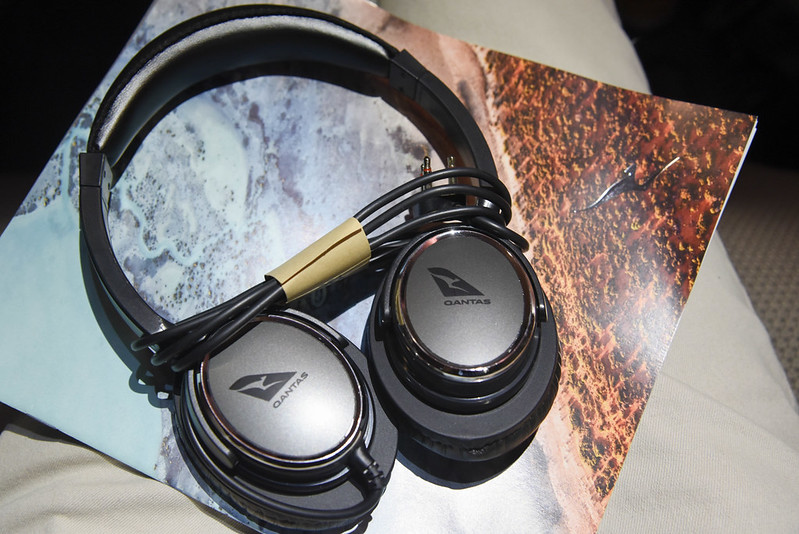 In terms of entertainment, the first class suite comes with a 43 cm monitor for passengers to catch the latest blockbusters, TV shows and music. You’ll need to rotate your seat around 45 degrees to watch comfortably. The selection was adequate, with a nice variety of films (both new and old). You won’t find as many TV shows here but I like how the entertainment system has plenty of episodes from each series. Qantas-branded noise-cancelling headphones are also provided – this is no different from the type of headphones the airline provides business class passengers. 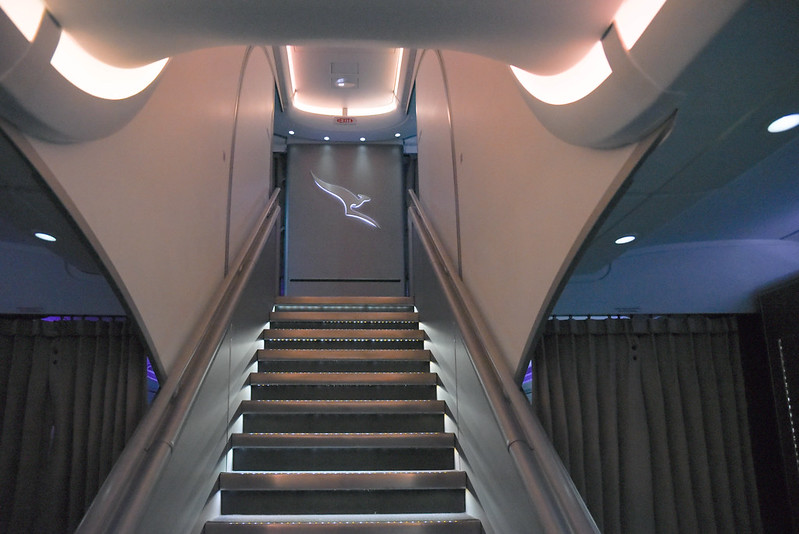 stairs leading to the second level 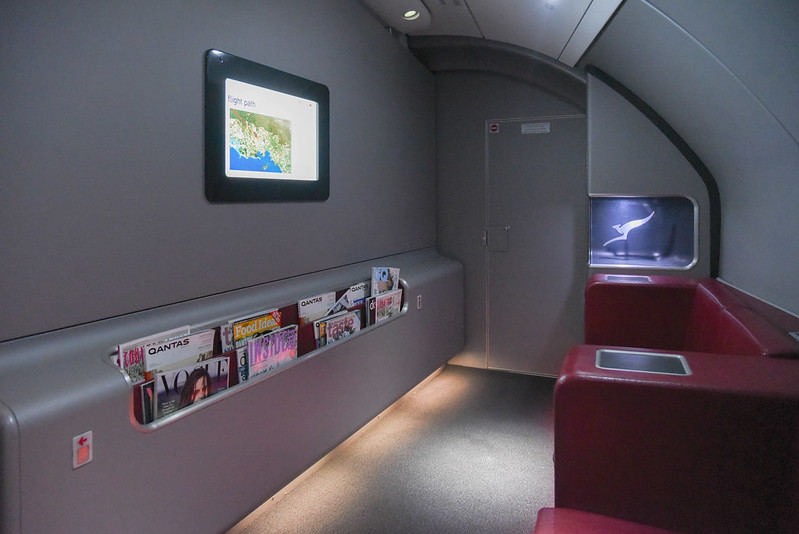 The A380 also has a lounge at the upper level where both business and first class passengers can get together and unwind. It’s a relatively modest space with a long couch and a magazine rack. Snacks such as potato chips, chocolates and champagne are made available on a self-service basis on a counter. As I was on an overnight flight, the lounge was mostly empty though I did spot a few passengers munching on some goodies. 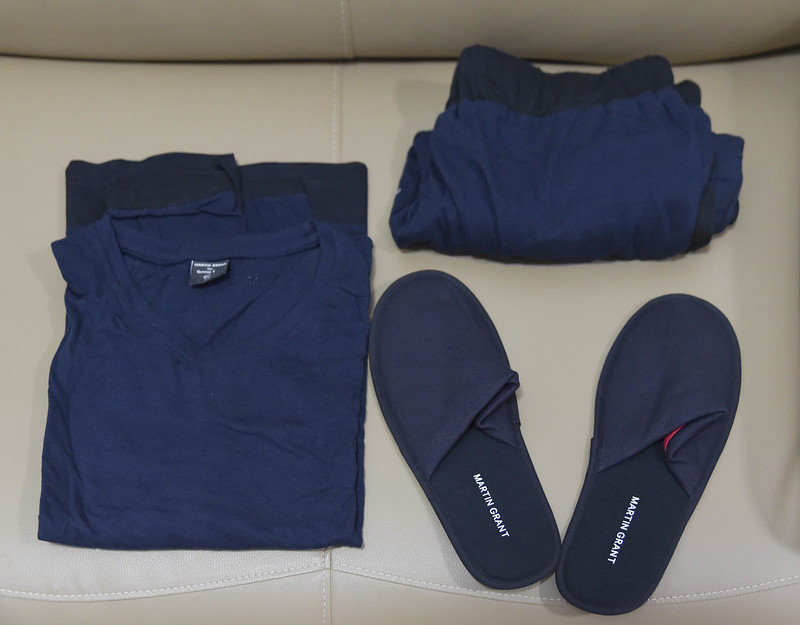 After the flight took off, the crew started distributing the amenity kits and pajamas. Qantas’ first class pajamas come from Martin Grant and are quite practical. They’re the high-quality type that would work nicely even for day-to-day use. 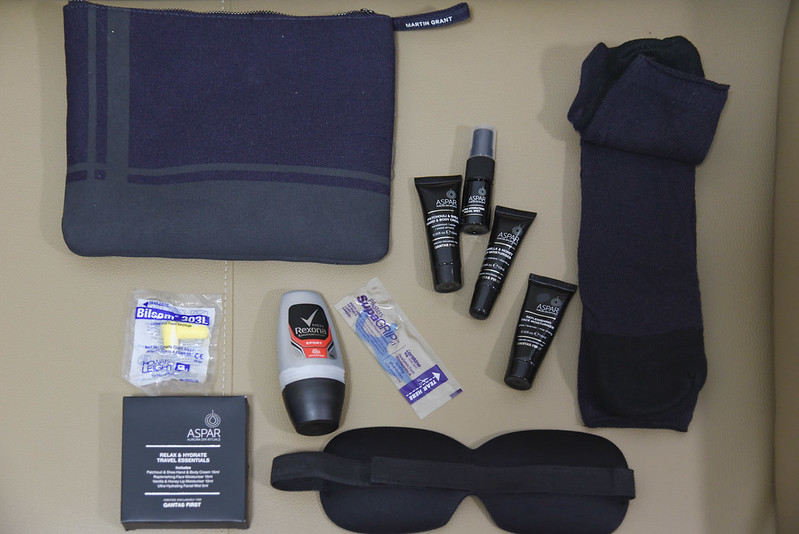 The Qantas first class amenity kit packaging is also designed by Martin Grant while the skincare products inside come from ASPAR. Qantas also uses the same brand in business class but it’s worth noting that in first class; they provide hand & body cream, face moisturizer, lip balm and facial mist while in business class it’s only hand cream, face moisturizer and lip balm. 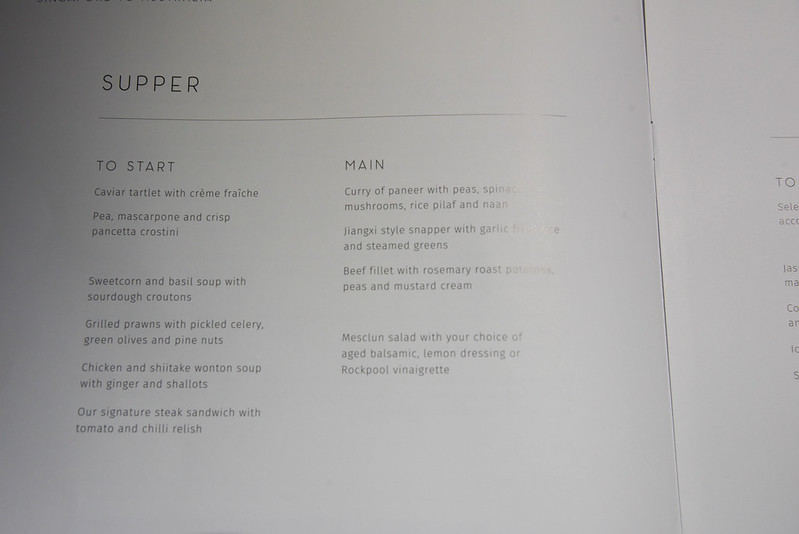 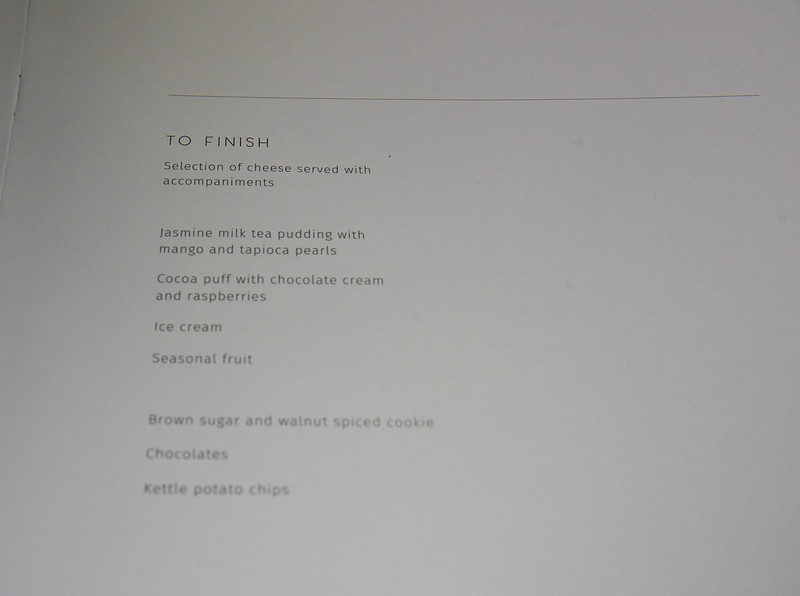 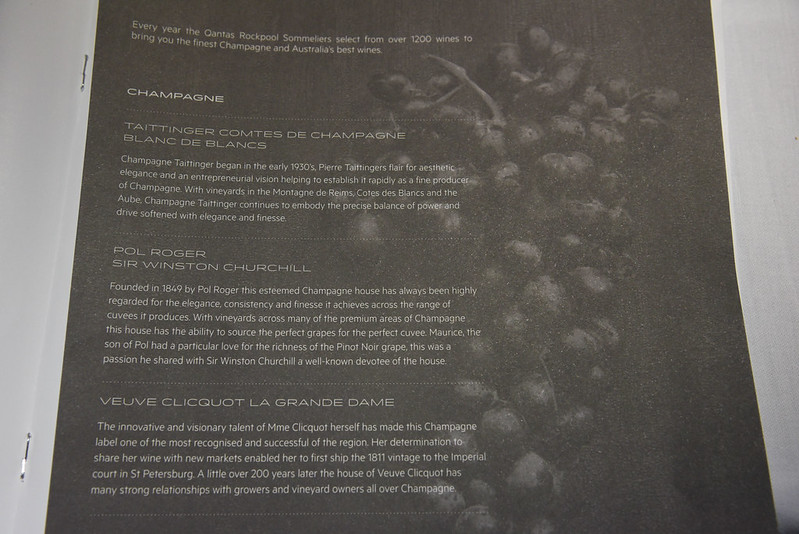 Shortly after taking off, the crew started taking orders. Dinner consisted of three courses but I was asked to order as much as I liked. It was around 10PM by this time and I wasn’t feeling particularly hungry. However, I wanted to check out Qantas’ first class range to see how it fared versus other carriers. The airline prides itself with a first class menu from Neil Perry, one of Australia’s most well-known chefs and the owner of Rockpool restaurant in Sydney. 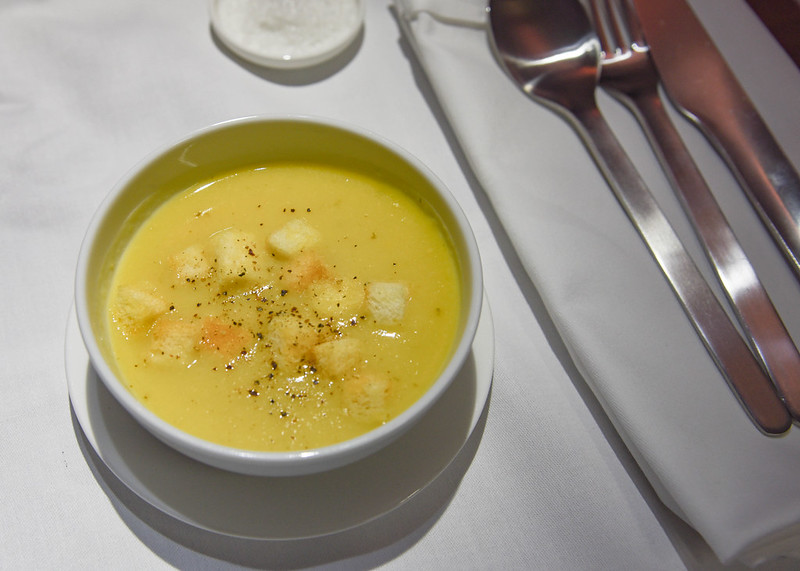 I started off with the Sweetcorn and Basil Soup with Sourdough Croutons. It was getting chilly by this time and soup was a fantastic way to start the meal. It was tasty and I downed it in no time, wishing I could have another bowl. I made a conscious effort not to order another due to the number of other dishes about to come. 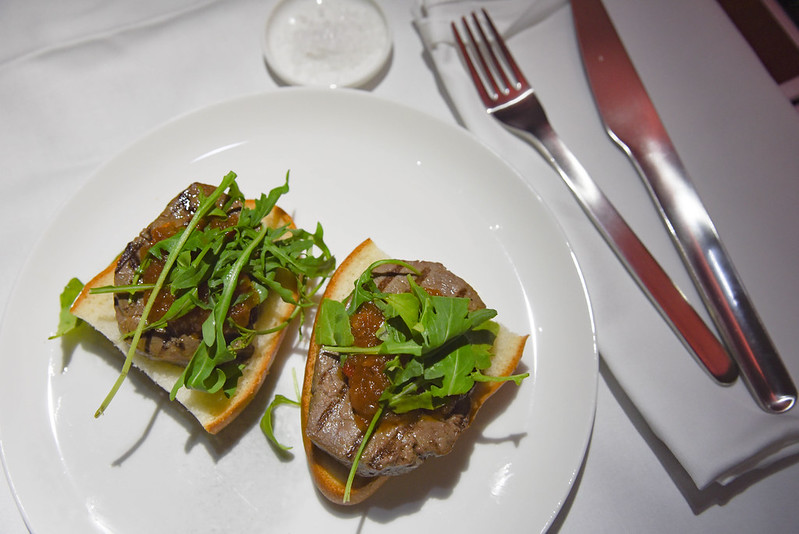 Next up was the Signature Steak Sandwich. It attracted my attention from the menu due to the word “signature” and after having a bite, I could see why. The beef was tender and possessed a smoky flavor. It went very well with the tomato and chili relish while the bread gave it an added crunch. 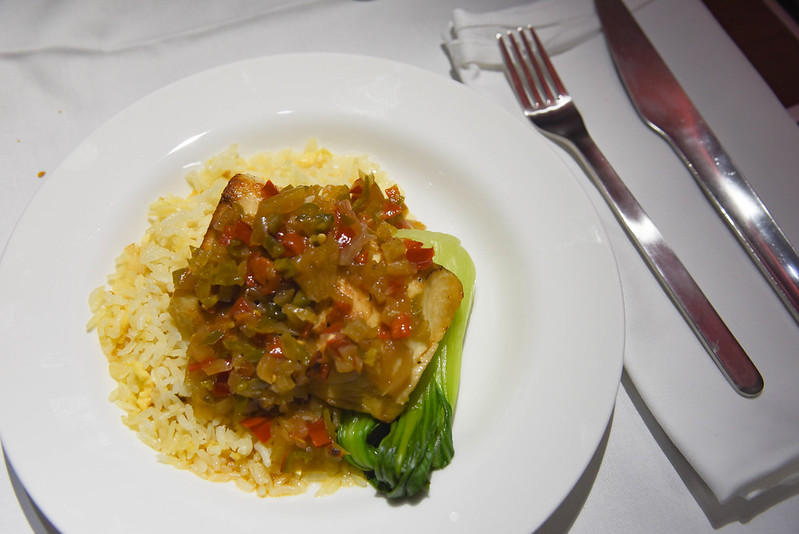 I chose an Asian dish as my main, the Jiangxi Style Snapper with Fried Rice and Greens. I had initially wanted to try the beef but after already having the steak sandwich, I opted for a lighter choice. The fish was just average with the vegetable toppings giving it a slight chili flavor. 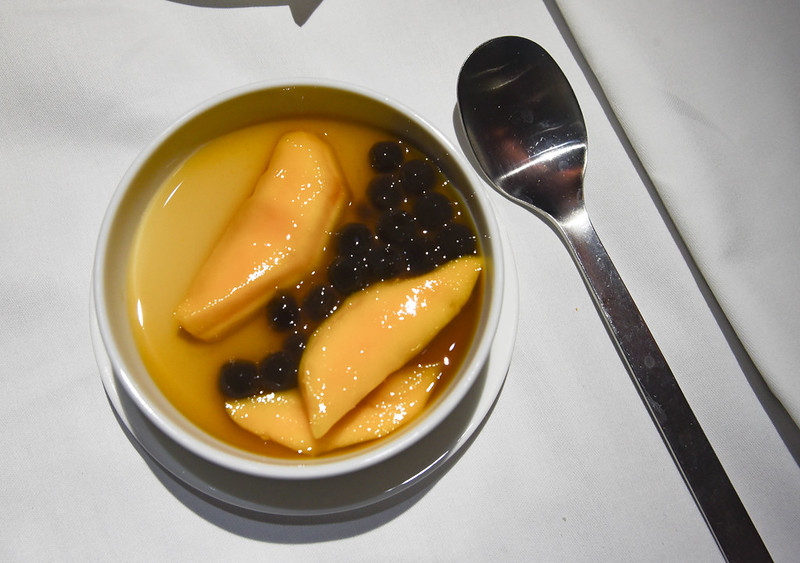 I skipped the cheese and ended the meal with Jasmine Milk Tea Pudding with Mango and Tapioca Pearls. This was delightful and quite creatively made. I finished it all despite being utterly full from the earlier dishes. 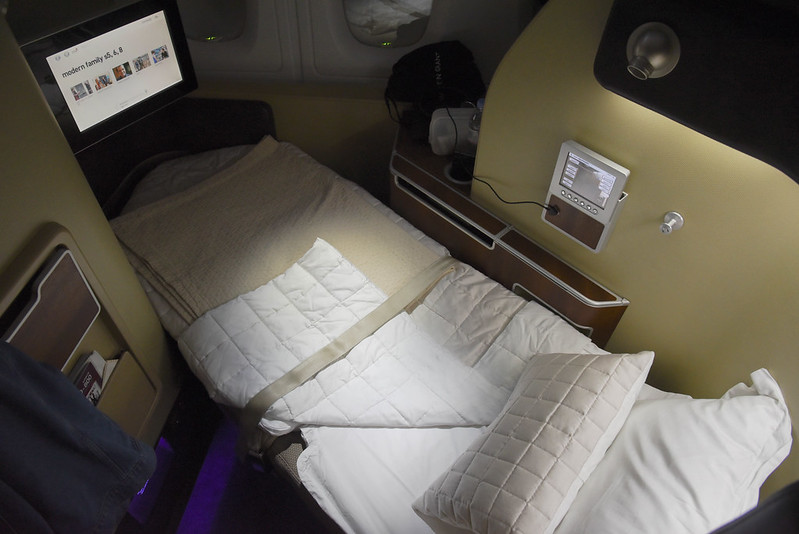 By the end of my dinner, there were just under 4 hours left into the flight. I pressed the call button to have a crew member do up my bed. One of the highlights of Qantas’ first class product is undoubtedly the bed. It ranks among the most comfortable that I’ve slept on a plane. 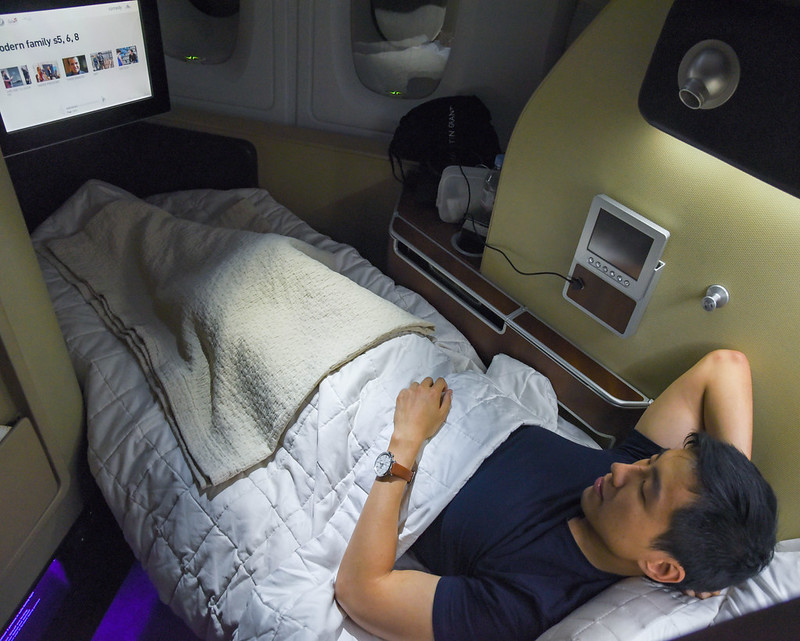 The bedding from Sheridan includes a thick memory-foam sheepskin mattress wrapped in sheets and a super fluffy duvet. Passengers can also choose from various types of pillows including a bolster. I was quite impressed with the crew’s efforts to straighten my bed despite the short time it took in setting it up. Overall, it felt like sleeping on a hotel bed, albeit in the skies. I blame my bad back but I’m very particular when it comes to sleeping on a plane. This was one of the rare instances when I slept like a baby. 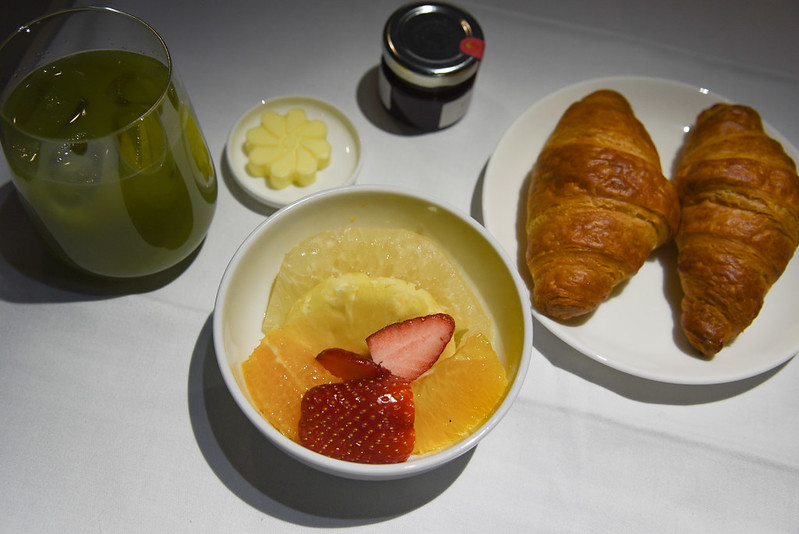 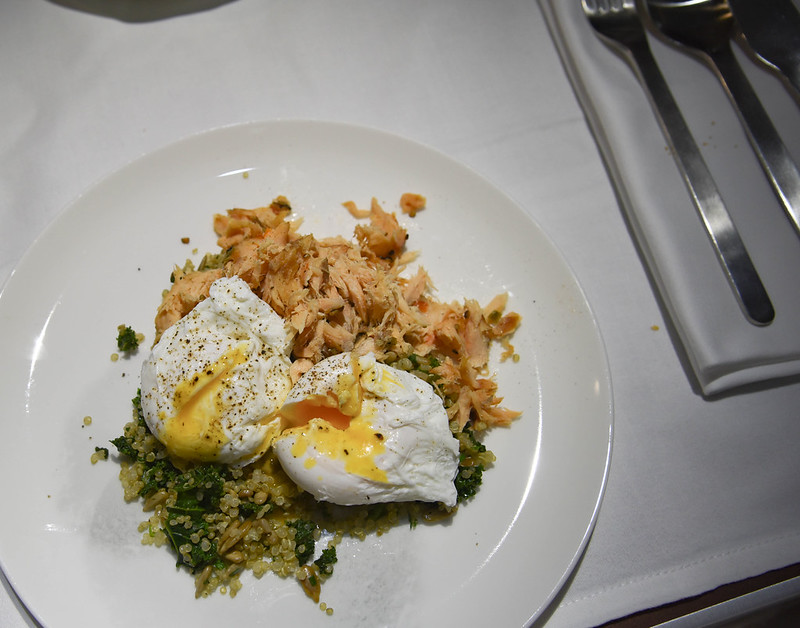 Around an hour prior to landing, I woke up and found the crew starting to serve breakfast. I was still quite full from the supper I had a few hours ago so I decided to just have fruit, croissant and some poached eggs. The eggs were delicious and I was amazed at how the crew could serve up poached eggs as if it came straight out from one of Melbourne’s iconic cafes.


Just before landing, the inflight supervisor made his rounds once more and personally shook hands with each and every first class passenger to thank them for flying with Qantas. It was a nice touch to end the flight and I personally thought it created a sense of recognition.

Qantas’ first class product is refined without being decadent, high end without being pretentious and reflective of the local culture without being kitschy. In a way, the service and style is like the efficient but casual Aussie culture. Everything worked. The food was delicious. Amenities were of high quality but there were none of the ostentatious features that other airlines have come to sought for their own first class products. To most premium passengers, such features are good to have but not always necessary even when you’re paying thousands of dollars for your ticket. It’s not surprising to think that the number one reason why someone would fly first class is to be able to sleep well. As someone who typically has a hard time sleeping on the plane, I have to say that I found Qantas’ beddings to be highly comfortable and even more so than the other first class product I’ve tried. To me, that’s certainly more important than those unnecessary bells and whistles.