Of the three major ethnic quarters of Singapore, it is perhaps Little India which is the most localized and authentic. Whereas other ethnic quarters have given way to chic boutiques and funky bars, Little India remains as a true enclave of the local Indian community. More recently it has also become the defacto hangout place of many foreign Indians and Bangladeshis which adds a bit more authentic feel of the Indian Subcontinent to the district. 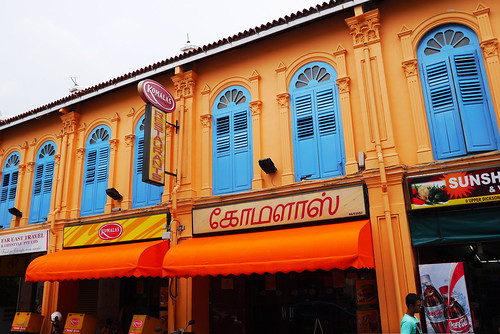 a slice of the bold colors that India is known for

I was recently invited by omy.sg to an afternoon workshop called “Photos make your blogs go Pop!” where they gave tips on photo-taking for bloggers. I thought the subject matter was helpful, and I did appreciate the time the speakers took in giving photography tips. There were a lot of great tips shared, such as using photos to tell a story and the ways to present them. Still, I was more fixated at being one of the first people in Singapore to test out Panasonic’s newest GF5 camera through a photowalk. I’ve had a Lumix LX3 for over 3 years now and am quite impressed by their range of cameras. 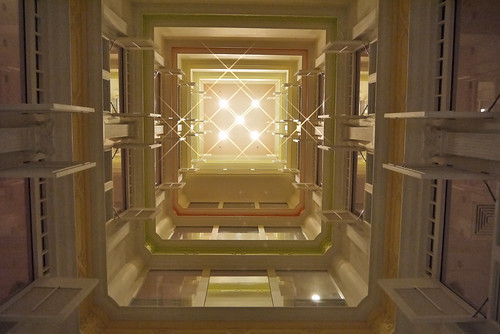 the impressive ceiling of the albert court village hotel 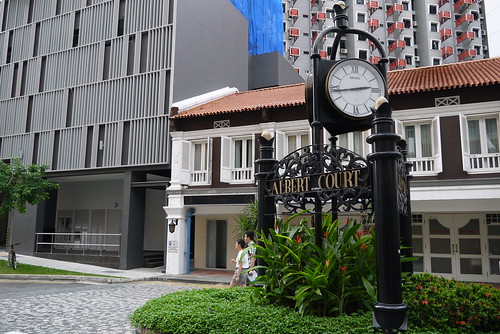 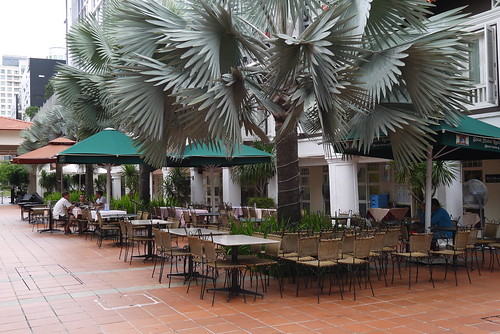 this is where we started our photowalk

The workshop was held in Albert Court Village Hotel which is situated at the fringes of Little India. It’s a boutique hotel consisting of a row of pre-war shophouses with Straits Chinese carvings and motifs. It’s a great location situated only a few blocks away from other heritage buildings such as the temples of Little India and was just the right place to start our photowalk! Aside from this, it’s also very near the main Dhoby Ghaut area and is just a few minutes walk away from the museums of the Civic District. 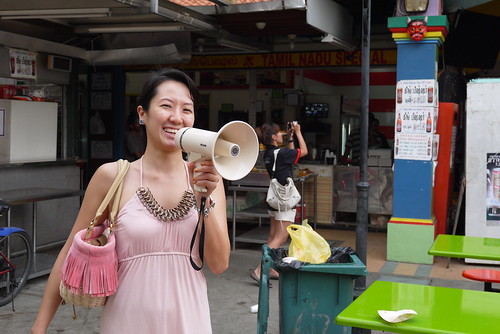 christine ng of chrispytine giving some tips during our photowalk 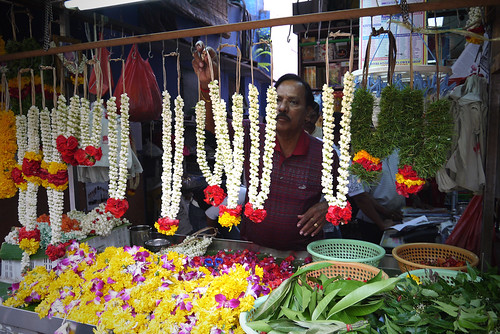 selling flowers as offerings for the nearby temples

Little India is a place visitors go to soak in an atmosphere that is otherwise considered exotic in Singapore. Sure, colorful temples abound but there’s nothing like the energetic street life along Serangoon Road and surrounds with fruit and flower vendors, jewelry shops and Tamil-influenced eateries housed in bold colored buildings all competing for attention. 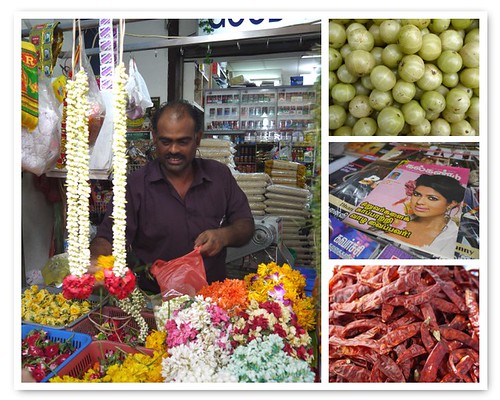 We walked for about an hour and a half, focusing on some of the backstreets of Little India. My general observation is that Little India is not as gentrified as other areas within Singapore’s central core. Most establishments are still meant to cater primarily to the Indian community rather than to tourists. It is still not uncommon to find spice markets here or inexpensive barbers just as one does in India itself. 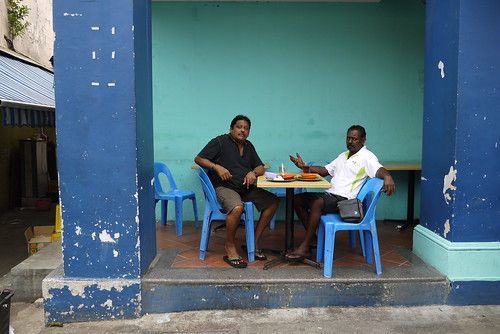 chit-chatting on a lazy saturday afternoon 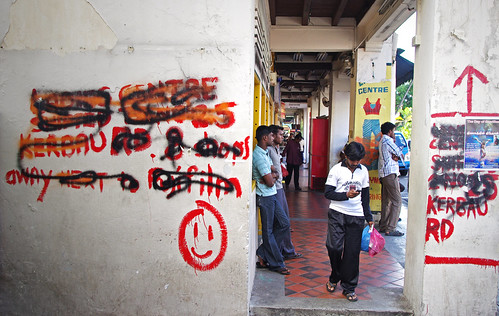 Of course a visit to Little India is not complete without seeing some of its many temples. We visited Sri Veeramakaliamman Temple but there was some renovation work going on and we could not go in. After the event, I had some spare time and decided to check out the other Hindu temples farther afield. This included the Sri Srinivasa Perumal and Sri Vadapathira Kaliamman Temples. I was a lot more impressed with the latter with its impressive facade even though it is a bit far and already quite close to Boon Keng. 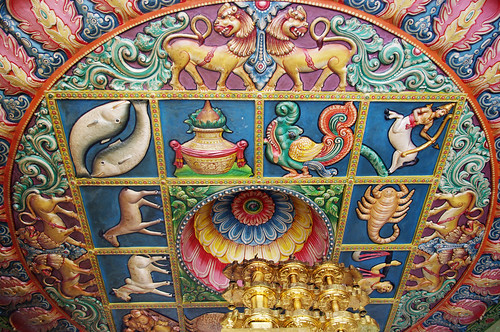 ceiling of the Sri Veeramakaliamman Temple 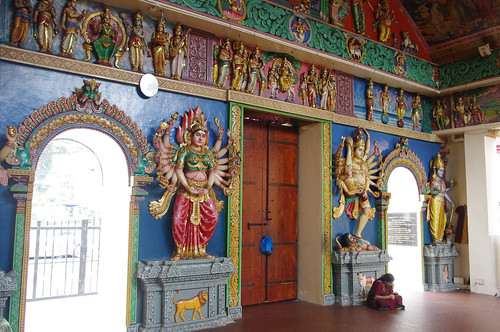 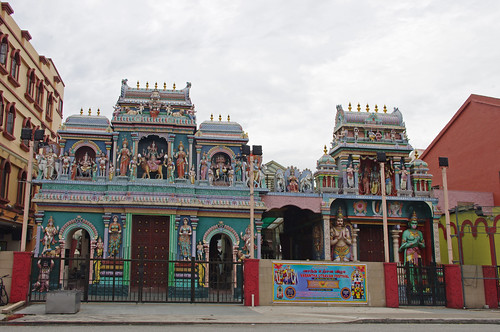 Surprisingly, Little India is also home to a very well-known Buddhist temple, and that’s the Sakyamuni Buddha Gaya Temple with its larger than life statue of a smiling Buddha. I later found out that there’s also a reclining Buddha housed in a small room just behind the large Buddha statue. If you do go there, don’t miss it! 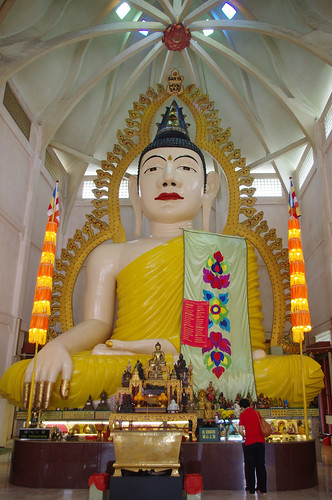 I returned to Little India again the next day, this time with better weather conditions. I went to check out the colorful shophouse in Kerbau Road which we also covered during the photowalk. It was a lot different visiting Little India on a Sunday compared to Saturday when we had our photowalk. There was a lot more people engaging in picnics or just hanging out, and for a time, it did remind me a bit of India. 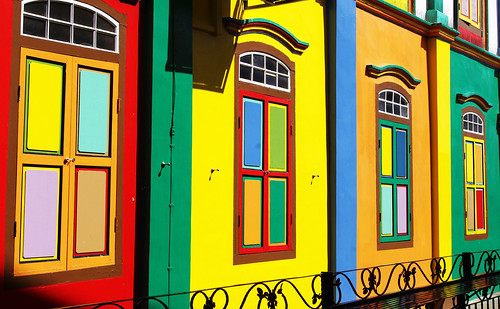 Despite the number of people, my general observation is that most Singaporeans, especially those who don’t come from an Indian heritage rarely come to Little India (Tekka Market aside). It’s a shame as the place actually has a lot to offer. It gives one a chance to escape the routines of this airconditioned concrete jungle and venture somewhere exotic and interesting, even just for a while, without actually having to leave the country.

P.S. Have you voted for I Wander yet in the Singapore Blog Awards 2012? Here’s your chance to win cool prizes by voting — Just click on this LINK. You will need to register one-time which is relatively painless, and then click on the “Vote For Me” Button. You’ll know it’s a successful vote when the button turns blue and says “Voted.” You can vote once a day!