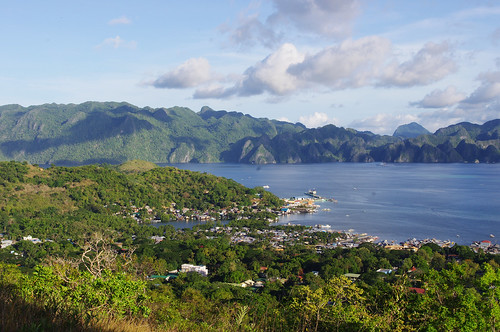 The flight to Coron was short and uneventful. I had to pinch myself when I first read about the following random fact but this paradise on earth is ONLY 170 miles from the congestion of Manila! The contrast between the two places couldn’t be greater. Given the short distance, the airlines that fly there (Cebu Pacific, Airphil Express and Zest Air) only use turboprops. Our Cebu Pacific flight to Coron used a narrow and jampacked 72-seater ATR plane. But at least it was a very short flight. 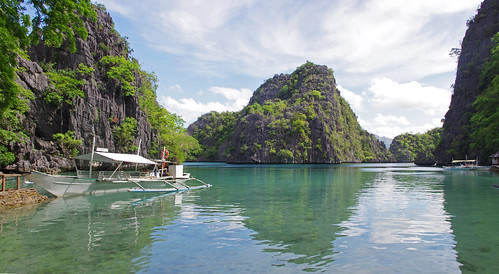 not krabi, not phuket, not ha long bay… we are in coron!

The destination recognized by most as Coron is actually composed of a few islands. Francisco B Reyes Airport, the main gateway to Coron, is actually situated in Busuanga Island and so is the main town of Coron. Most of the limestone rock formations and hidden lakes which Coron is known for is situated in Coron Island. Aside from this, there are hundreds, if not thousands of other islands within the Calamianes Group which are still considered by travelers to be part of Coron. For this particular trip, I visited Busuanga and Coron Island, as well as several other outlying islands. Here, I will be covering Busuanga and Coron Island areas. Confused yet? 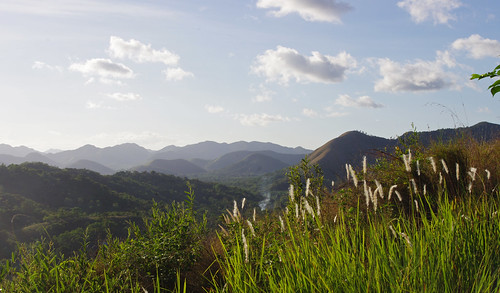 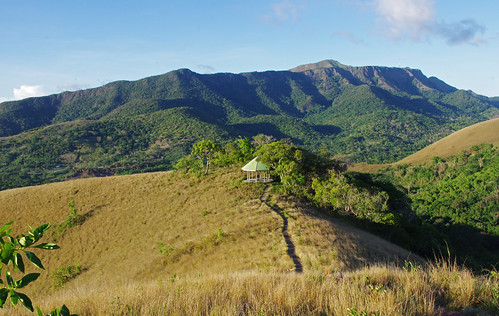 the view from mount tapyas, in busuanga island

Much of the action actually centers in the compact town of Coron. We stayed in this area, in a newly-built and unassuming place called GMG Hotel. It was not the lap of luxury but the location was very convenient. It was a mere five minutes walk to the main wharf for boats leading to the various islands and even closer to the more well-known restaurants in town. 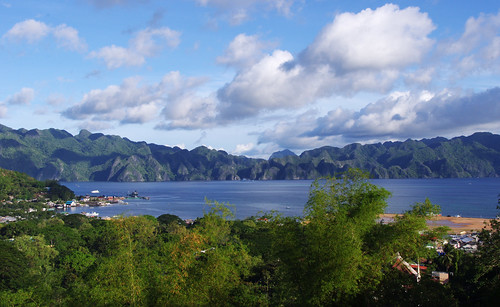 the view midway up the hill

As we arrived in the afternoon, we decided to make Mt. Tapyas our first stop. Walkable from town (just lead your eyes to the cross on the hill and you’ll know how to walk there), this hill is a 720 step “trek” up. It was not a particularly hard climb given that the steps are even and well-paved but the scorching summer heat could deter some. I climbed mainly for the view which certainly did not disappoint. Best time to climb is around 30 – 40 minutes before sunset. If the sky’s clear, you could be treated to a symphony of red and blue contrasting with each other. There was a bit of cloud during my climb, but as a consolation, I managed to witness this fascinating cloud formation. 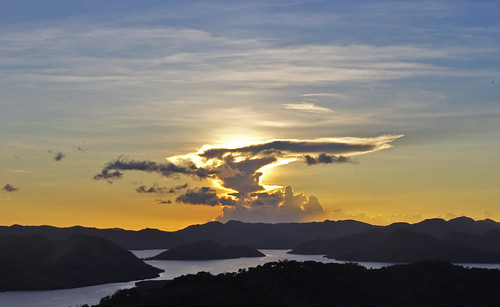 After making that climb up the hill, it was now time to reward ourselves. We headed next to Maquinit Hot Springs, which was around 20 minutes away by tricycle or by car. We decided to take the car. At Php 150 (US$ 3.70) per head, I found the entrance fee to be quite steep, considering the admission in hot springs elsewhere in the country is normally not more than Php 30 (less than US$1). Still, the hot pools are spacious and less crowded than elsewhere I remember. After an afternoon of “trekking,” I would think it’s a small price to pay for a soothing bath.

We did not get to explore the islands near Coron Town again until our last day. We hired an early morning boat to the famed main island of Coron. It has been designated as the ancestral domain of the indigenous Tagbanua people who regard the island as sacred. As such, only a small portion of it is normally open to visitors. But even this small portion is more than enough to wow visitors over. 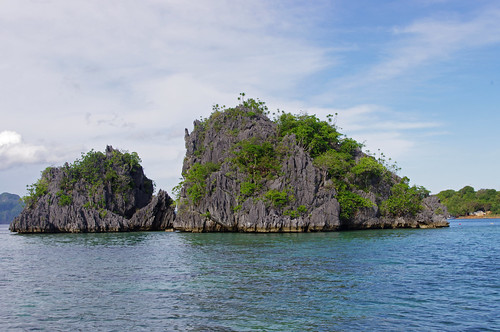 two of the siete pecados… it’s not so obvious from this picture but the waters here are unbelievable in more ways than one… it’s like swimming in a large aquarium! 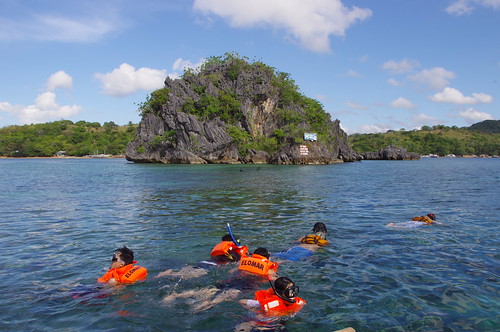 We first made a stop in Siete Pecados (translated as the seven sins). It is named as such due to an old folk tale, and also partly due to the fact that there are seven limestone rock formations near each other. It is a very special place due to its clear waters and abundance of marine life. We had the chance to snorkel around the islets and we were in awe of what we saw down there. Personally, it was the most impressive snorkeling experience I had. It was like bobbing our heads inside one large aquarium filled with fish of various hues approaching us without any hint of fear. They were so near and so abundant in numbers that one could practically just touch them! 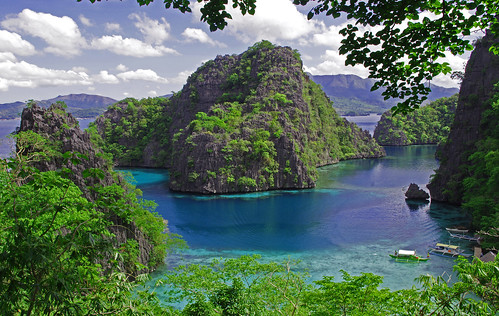 the #1 reason i went to coron is to see this amazing view on the way to kayangan lake!

After having our fill of the marine life, we proceeded to Kayangan Lake, which many regard as the highlight of any trip to Coron. To get there, we had to climb some hundred-odd steps up, where there is a great view of the surrounding karst formations. Make sure to stop here as the “viewing point” is situated in an unassuming rock near a cave. Then it’s more or less the same number of steps down to get to the lake itself. 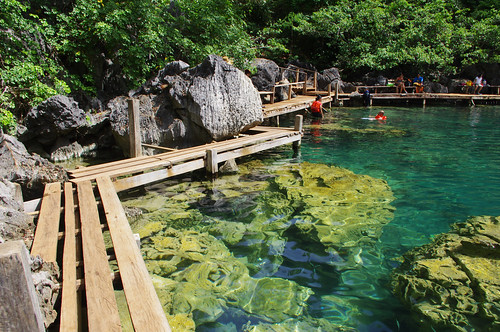 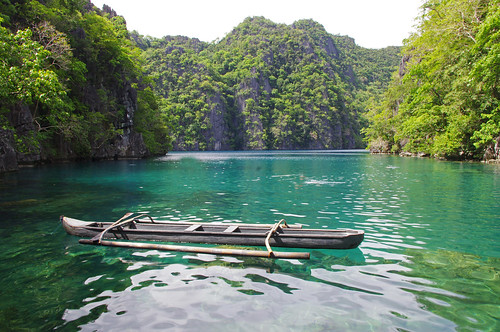 the near transparent kayangan lake

Surrounded by more karst formations, the lake was named the cleanest lake in Asia for a few years and it’s easy to see why. It is several feet deep but the water is so clean that one can see right to the bottom. Some have actually gone to the extent of comparing the lake to the UNESCO World Heritage Site of Jiuzhaigou in Sichuan, China but the difference is that Kayangan Lake is open for swimming! 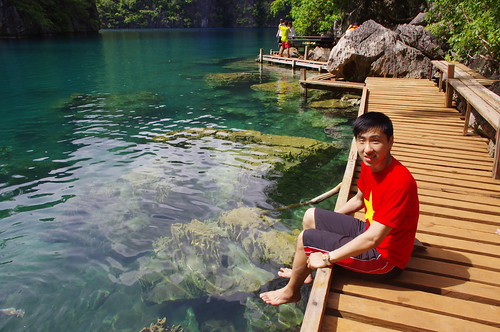 getting my feet wet – literally – before jumping right in

I noticed a few swordfish here and there but overall the marine life was not so abundant in Kayangan Lake. Most people come here just to take a relaxing dip and that’s exactly what we did. 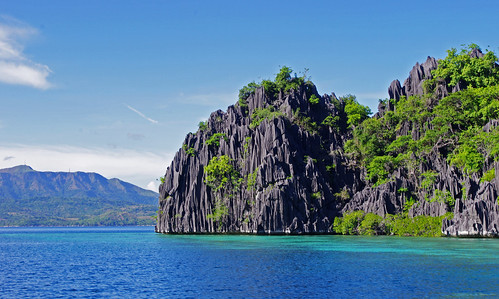 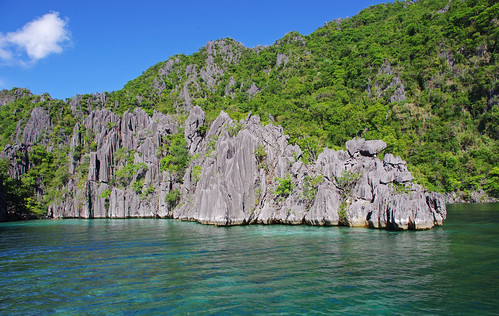 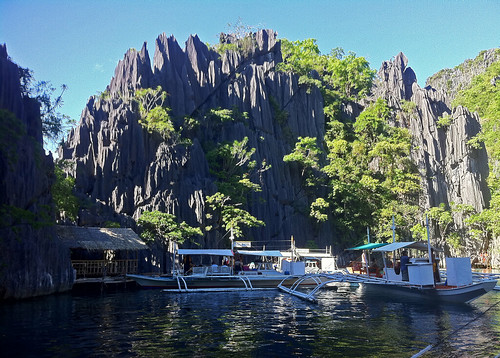 The last place we went to in Coron Island are the Twin Lagoons. Again, it is a place for snorkeling. Although seeing the limestone rock formation jutting out of the emerald waters was impressive (the rock formations are more concentrated in the twin lagoons area), the snorkeling is generally not recognized to be as good as in Siete Pecados. Since there was better snorkeling elsewhere, I just appreciated the great scenery around this place. More often than not, I hear comments from people comparing Coron to Krabi or Phuket in Thailand, and after seeing Twin Lagoons, it’s very easy to see why. I’ll let the pictures above do the talking 🙂

Again, Palawan did not fail to wow me with its otherworldly land and seascapes. Within just one day, I saw the clearest lake I’ve seen in my entire life, had my best snorkeling experience thus far and stood in awe of the majestic karst formations in and surrounding Coron Island. There were actually several other places we did not visit such as shipwrecks dating back from World War 2 lying on the (not so deep) seabed and lakes considered sacred which are off limits to visitors. For another time perhaps.

Getting There:
Coron is a relatively new destination, but has rapidly become a popular destination for leisure travelers in general. Four years ago, barely anyone was flying there. Currently, 3 major domestic airlines (Cebu Pacific, Zest Air and Airphil Express) have daily flights to Coron from Manila. Airphilexpress has weekly flights from Puerto Princesa. By ferry, it is possible to shuttle oneself between Coron and El Nido (another popular destination in Palawan).

Where I Stayed:
I stayed in GMG Hotel which is situated in the middle of town. They offered me a 3D / 2N package inclusive of lodging, all meals (B/L/D), airport transfers,  boat trips and entrance fees for just Php 5,000 per person.

Rooms are spartan but clean. The staff are very attentive and offer good service. Look for Nicca if you decide to stay here, she helped plan our trip and made sure everything was alright throughout our stay.

This is Part 1 of our two-part series on Coron. Click here to read about our excursion to Coron Island Loop and the main town of Coron.